Llangolman is a parish situated near the upper valley of the Eastern Cleddau, and is part of the community of Mynachlog-ddu. The parish War Memorial was located in the Memorial Hall at Llangolman however, when that was demolished, it was placed on a stone in the Village. The photograph of the memorial is courtesy of Reverend Huw George. 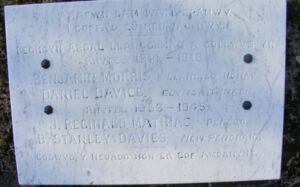 Daniel Davies, Private, 204772, Kings Liverpool Regiment. Daniel was the son of David and Sarah Davies, of Glynsaithmaen, Llangolman. He resided at Cilgerran prior to the war. He enlisted at Cardiff into the Army and joined the Royal Welsh Fusiliers, with the Service Number 43014. Daniel then transferred into the 8th Battalion (Liverpool Irish), King’s Liverpool Regiment, which was attached to 165 Brigade, 55th (West Lancashire) Division. The complete Division was reformed around Hallencourt in France during January 1916, relieving the French 88th Division south of Arras by 16 February. It was familiarised into trench warfare here before moving south in July and took up a place in the front line opposite the village of Guillemont. Here the division fought at the Battle of Guillemont and the Battle of Ginchy. There was a short period of rest at Ribemont from the 12th to the 17th September, and then the division fought at the Battle of Flers-Courcelette and the Battle of Morval. Relieved by 41st Division on 28 September, the Division withdrew to the area of Buire and Ribemont, before relieving the 29th Division in the Ypres salient in October 1916. It was destined to remain in this area for almost a year, stationed near Railway wood. At the end of July 1917 the Division fought at the Battle of Pilckem, and this is where Daniel was killed on 31 July 1917, aged 24. Daniel has no known grave, and is commemorated on the Ypres (Menin Gate) Memorial, Belgium. 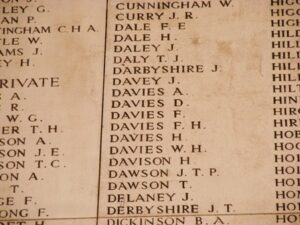 Benjamin Morris, Private, 46381, Welsh Regiment. Benjamin was the son of David and Margaret Morris, of Pantinon, Maenclochog, and had enlisted at Llandeilo into the 9th Battalion, Welsh Regiment. The battalion had moved to France in July 1915 attached to 58 Brigade, 19th (Western) Division. The Division fought during the opening attack of the Battle of Loos, and then moved to the Somme, where they took part in the second wave of the attack on Ovillers-La Boisselle on 1 July, capturing the village at heavy cost, and fought through the Somme Battles of Pozières and the Ancre in 1916. They then moved North to Ypres, taking part in the Battle of Messines, and fought on the Menin Road and at Polygon Wood, before moving up to Broodseinde, Poelcapelle and Passchendaele Village itself. In 1918 they were caught up in the German Spring Offensive near St. Quentin, where they suffered terrible casualties, and fought at the Battle of Bapaume. Benjamin was seriously wounded during this desperate fighting, and died of his wounds on 24 March 1918. He was 22 years old, and is buried at Dernancourt Communal Cemetery Extension, France. 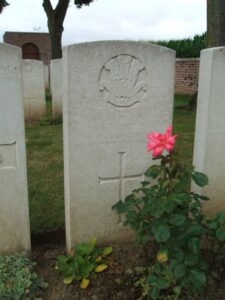 Benjamin Stanley Davies, Fusilier, 4201888, Royal Welch Fusiliers. Benjamin was the son of Thomas and Anne Davies of New Pencraig, Efailwen. He served in the 1st Battalion, Royal Welch Fusiliers. The Battalion had suffered terribly during the German invasion of France, and the remnants were evacuated from Dunkirk. Back in the U.K., it was brought back up to strength by drafting in men from other Battalions of the R.W.F., and in 1942 they sailed to the Far East to face the Japanese invasion. After a brief stop in Cape Town they arrived in India in the Summer of 1942 and were employed in quelling the rebellion there at first. After some training in amphibious landing, the Battalion were sent to Burma, landing on Akyab Island. In March 1943 they moved to Donbaik where they had their first taste of battle against the Japanese. After suffering heavily, they managed to evade encirclement and were pulled out of Burma back to India, where they rebuilt and underwent further training. In 1944 the Japanese crossed the Chindwin River in Burma, and were advancing on Imphal and Kohima. The R.W.F., as part of 6 Brigade, 2nd Division, were rushed to the area during April, where they met the Japanese head on, finally winning the battle. After that, the Japanese were on the back foot, being pushed back by the advancing British troops, and it was during this period that Benjamin was Killed in Action, on 29 September 1944 aged 30. He is remembered on the Rangoon Memorial. 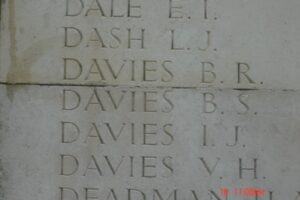 John Reginald Mathias, Fusilier, 4192728, The Royal Welch Fusiliers. John was the son of Stephen John Mathias and Mary Ann Mathias (nee Jenkins), of Penebo, Rhosfach. He was a regular soldier and served with the 1st Battalion, Royal Welch Fusiliers. The battalion was in Belgium with the BEF at the outbreak of war and saw heavy fighting during the retreat to Dunkirk. John was killed in action whilst fighting near St. Venant at some time between 31 May 1940 and 2 June 1940, aged 22. He has no known grave and is commemorated on the Dunkirk Memorial, France. 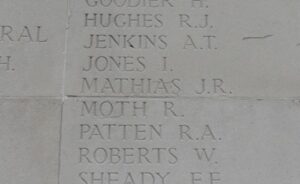