Llandyssilio is a small village on the Carmarthenshire/ Pembrokeshire Border, on the road from Narberth to Crymych, towards Cardigan. The men of the village who gave their lives during both World Wars are commemorated on the local war memorial, which takes the form of a Celtic cross, with granite panels attached, bearing names of the fallen. Oddly, the names are not sorted by which war the men fell in, but by rank, which has made research somewhat interesting. Many thanks to Les Nixon and Sarah Pugh for their photographs of the memorial. 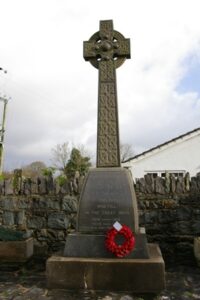 John Bowen, Private, 59427, Royal Welsh Fusiliers. John was the son of Thomas and Mary Bowen, of Maes-y-Bryn, Clynderwen. John enlisted at Pontardulais into the 2nd Battalion, Royal Welsh Fusiliers, a Regular Army Battalion, which had served in France since landing at Rouen on 11 August 1914. The 2nd RWF was the Battalion of Robert Graves and Siegfried Sassoon, and also of the later author, Frank Richards, DCM, MM. They fought during all of the major engagements on the Western Front, and on 6 February 1918 were transferred to 115 Brigade, 38th (Welsh) Division. On 21 August 1918 the 38th Division launched its attack across the River Ancre, and began to drive the Germans back across the old Somme battlefields of 1916. On 12 September 1918 the 2nd RWF were in the line near Gouzeaucourt preparing to launch an attack the following day, but were caught in heavy German shellfire. Over twenty men were killed that day, one of whom was John. He was aged just 22, and was buried in Gouzeaucourt New British Cemetery, France. 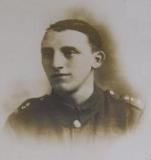 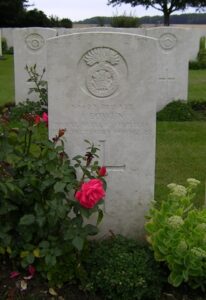 Gwilym Tyndale Evans, Private, 10765, Royal Fusiliers. Gwilym was the son of the Reverend John Jenkin Evans, and Mrs. Charlotte Evans, later of Glan Rhydwilym, Clynderwen. He enlisted at Haverfordwest into the 26th (Bankers) Battalion, Royal Fusiliers, part of 124 Brigade, 41st Division. The Division were in France by 6 May 1916, and took part in the Battles of Flers and Le Transloy on the Somme, before moving North to Ypres, where they fought at the opening of the Passchendaele Offensive, at Messines, and at the Battle of Pilckem alongside the 38th (Welsh) Division. On 23 September 1917, the Division were in the midst of the Battle of the Menin Road, when Gwilym was killed in action, aged 20. His body was lost in the Flanders mud, so Gwilym is commemorated on the Tyne Cot Memorial, Belgium. 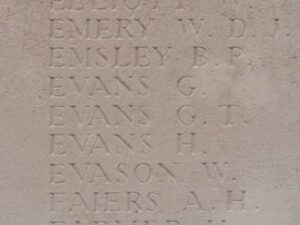 John George, Private, 48945, Welsh Regiment. John was the son of Philip and Anne George, of Bron-y-Gaer, Llandyssilio. He enlisted at Narberth into the 14th (Swansea City) Battalion, the Welsh Regiment, part of 114 Brigade, 38th (Welsh) Division. In December 1915 the Division had moved to France, where it was sent to the Nursery Area around Armentieres. They moved south to the Somme, where they were decimated at the Battle of Mametz Wood, and spent a year rebuilding their losses before taking part of the Battles of Pilckem and Langemark, part of the Passchendaele Offensive. They helped to stem the German Offensives in the months after the German Spring Offensive of 1918- the Kaiserschlacht- and took part in the Battle of Épehy, where the tide had turned, and the British and Dominion Armies had begun to push the weary German Armies back to their starting positions of the Hindenburg Line. John was wounded during this stage of the war on 6 September 1918, and was sent home to Mary Hills Hospital in Leeds, to recover. He sadly died of wounds sustained in action on 6 October 1918, aged 22, and his body was transported back to Llandyssilio, where he was laid to rest in Rhydwilym Chapelyard on 11 October 1918. He is commemorated on a war memorial within the Chapel. 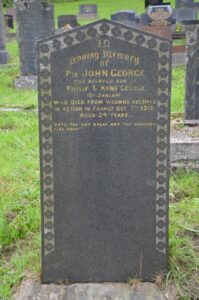 Arthur James, Private, 57926, Royal Fusiliers. Alfred was the son of Benjamin and Ruth James, of Gilfachwen Farm, Clynderwen. He had married before the war, and lived with his wife Daisy James, at 10, Park Parade, Palmer’s Green, London. Alfred enlisted in London into the Royal Fusiliers, and was posted to the 9th Battalion, which was attached to 36 Brigade, 12th (Eastern) Division. The Division had fought at Loos in 1915, and in 1916 saw much fighting on the Somme. During 1917 it fought at Arras and Cambrai, then relieved the 38th (Welsh) Division in the Fleurbaix front line in February 1918. On 22 March orders were received warning the Division of an imminent move, and two days later concentrated in the Busnes area and moved that night by motor lorry to Albert. Here the Division became hard pressed, taking part in the First Battle of Bapaume, where they tried to stem the German Offensive, suffering heavy losses before moving to Toutencourt. Alfred was killed during the desperate defence of Albert on 5 April 1918, aged 37. He is commemorated on the Pozières Memorial, France. 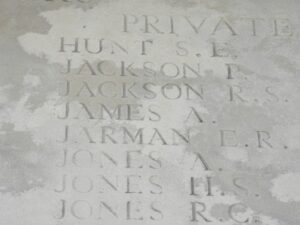 Thomas Isidore H. James, Private, 59832, Welsh Regiment. Thomas was the son of Thomas and Emma James, of The Pwllquarre Arms, Llandyssilio. He enlisted at Haverfordwest on 10 December 1915 into the Welsh Regiment. Thomas was mobilised on 16 May 1917 and posted to France two days later, joining the 2nd Battalion, Welsh Regiment. The battalion had been in France since the outbreak of war, attached to 3 Brigade, 1st Division. The Division fought in every major engagement on the Western Front throughout the war, and during the latter stages of the War in late 1918 were pushing the Germans back toward the Hindenburg Line when Thomas was killed in action on 3 October 1918, aged 33. He is buried in Vadencourt British Cemetery, Maissemy, France. 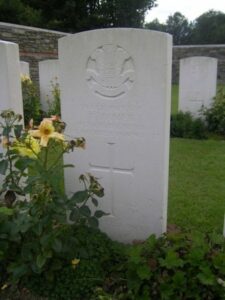 David Jenkins, Corporal, S4/065142, Royal Army Service Corps. David was the son of Elias Jenkins, of Llandyssilio. He married Annie Hill, of Granville, Park Terrace, Llandrindod Wells prior to 1898, and the couple resided at 50, Station Road, Barnes, London, where their daughter Millicent was born. David had enlisted on 23 March 1915 into the Army Service Corps. David remained on home service, working as a clerk with the Army Service Corps. He was hospitalised at Aldershot after taking ill, and died of pneumonia on 29 October 1918, aged 47. David is buried in Aldershot Military Cemetery, Hampshire. David does not seem to be commemorated locally. 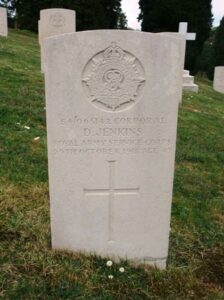 Benjamin Owen, Lance Corporal, 25302, South Wales Borderers. Benjamin was the son of Abel and Esther Owen, of Tycoch, Llandyssilio. He was the husband of Mrs. Blodwen Owen, of 3, Woodland Terrace, Godreaman, Aberdare, and enlisted at nearby Cardiff into the 1st Battalion, South Wales Borderers, who formed part of 3 Brigade, 1st Division. The Division moved to France at the outbreak of war, and fought there throughout the campaign. At the latter stages of the war in 1918, they were in the Lys area in Northern France, and were taking part in the so called 100 days offensive when Benjamin was Killed in Action on 18 August 1918. He was 28 years old, and is buried in St. Mary’s A.D.S. Cemetery, Loos, France. 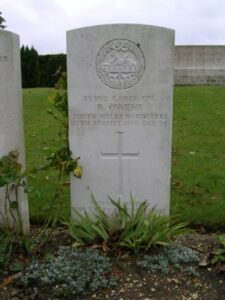 Thomas Robert Owen, Private, 2534, Welsh Guards. Thomas was the son of Thomas and Sarah Owen, of Brynmaen, Llandyssilio. He enlisted at Swansea into the 1st Battalion, Welsh Guards, part of the 3rd Guards Brigade, Guards Division. The Welsh Guards were formed in France by Royal Warrant in February 1915. The backbone of the newly formed Regiment was made of Welshmen who served in the Coldstream Guards and transferred over. They fought with distinction at Loos and on the Somme, then at Passchendaele, before being caught up in the German Spring Offensive of March 1918. The Division fought bravely against a superior force, and suffered many casualties, and in May were caught up in the 1918 Battle of Arras, where they helped to defend the ancient City. Thomas was Killed in Action here, aged 22, on 27 May 1918. He is commemorated on the Arras Memorial, France. 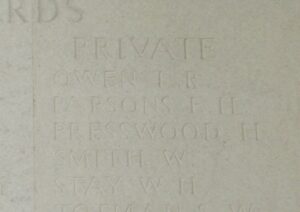 John Meurig Thomas, Lieutenant, Welsh Regiment. John was the son of Abel and Ann Thomas, of Thornville Grove, Clynderwen. He was commissioned into the 3rd Battalion, Welsh Regiment, but was attached to the 2nd Welsh, which was attached to 3 Brigade, 1st Division. The Division had been in France from the start of the war, and had seen particularly heavy fighting during all of the major battles. By the spring of 1918 the 1st Division was in the Vermelles-Loos sector, which was relatively peaceful at the time, following the tumultuous periods of the German offensives on the Somme and the Lys. On 23 May 1918 John was reconnoitring in No Man’s Land when he was killed. He was 28 years old, and is buried in Cambrin Churchyard Extension, France. 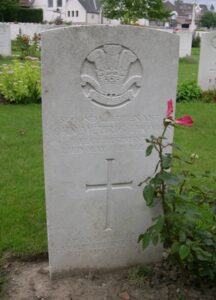 Henry Morris Evans, Fusilier, 4502633, The Royal Welch Fusiliers. Henry was the son of Silvanus Hall Evans and Margaret Evans, of Portisbach, Llandyssilio. The family resided at Haverfordwest prior to the war. Henry served with the 6th Battalion, Royal Welch Fusiliers. The battalion formed part of 158 Brigade, 53rd (Welsh) Division, and landed in Normandy in June 1944. After breaking out from Normandy, the Division fought through France and Belgium into Holland. Henry was killed in Holland, during the Battle of s’Hertogenbosch, on 24 October 1944. He was 31 years old, and is buried in Uden War Cemetery, Netherlands. 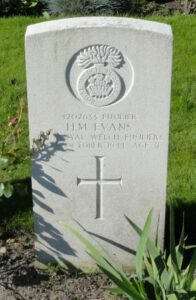 William Richard Jenkins, Able Seaman, Merchant Navy. William was the son of John and Blodwen Jenkins, of Blaenconin Cottage, Llandyssilio. He served in the Merchant Navy aboard the Cardiff registered steamer SS Porthmeor. William drowned when Porthmeor was lost following a collision on 20 August 1941. He was only 19 years old and is commemorated on the Tower Hill Memorial, London. 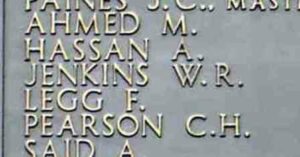 Eddie Gwynfor Thomas, Ordinary Seaman, D/JX 208246, Royal Navy. Eddie was the son of Ben and Kate Thomas, of Fishguard. He lived at 1, Council Houses, Llanycefn prior to enlisting into the Royal Navy, and was posted to the French Ship Medoc, which was a cargo ship that had been seized by the British in Aboukir when France surrendered to Germany. On the afternoon of 26 November 1940, Medoc was leaving Britain with a cargo of ammunition. She had just passed the Eddystone Reef when she was attacked by a German aircraft. She survived the attack, but a few hours later the aeroplane returned and torpedoed the Medoc, and she sank with all of her 39 crew, including Eddie. He was 21 years old, and is commemorated on the Plymouth Naval Memorial, Devon.