Llanddewi Velfrey lies on the main A40 road, about five miles west of Whitland, and three miles north-east of Narberth. The War Memorial for the men of Llanddewi Velfrey who died in the Great War takes the form of a carved Celtic Cross, which sits beside the main road to Haverfordwest. On the Memorial are the names of the eight men of the area who gave their lives in the Great War. These men are remembered below. 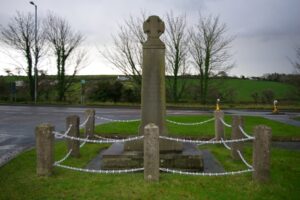 Arthur Ethelred Evans, Private, 260436, Gloucester Regiment. Arthur was born at Llanddewi in 1885, the son of Thomas and Margaret Evans. His parents later resided at New House, Llanfallteg. He married Edith Maud James, of Victoria Avenue, Fishguard in 1908 and the couple had three children together. Arthur enlisted at Fishguard into the South Wales Borderers following the outbreak of war. Arthur was later transferred to the 12th (Bristol City) Battalion, Gloucestershire Regiment, which had been raised at Bristol on 30 August 1914 and by June 1915 had moved to Wensleydale, joining 95 Brigade, 32nd Division. The Division landed in France on 21 November 1915, and fought on the Somme later in 1916. During October 1917, the 12th Gloucesters were fighting at Ypres, taking part in the Battle of Passchendaele. On 1 October 1917 the battalion moved into the front line at Meteren to relieve the 11th Battalion, West Yorkshire Regiment, and spent the following day consolidating the trenches. It was while carrying out this work that Arthur was killed in action, when the battalion came under bombardment by German gas shells on 2 October 1917. He was 32 years old, and is commemorated on the Tyne Cot Memorial, Belgium. He does not appear to be commemorated locally, but is commemorated in Fishguard. 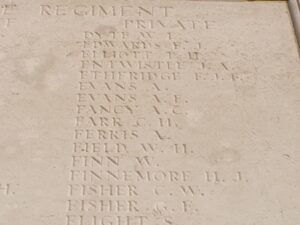 William Henry Evans, Private, 61652, Welsh Regiment. William was born in Llanddewi, the son of John and Theodosia Evans, of Plaindealings, Llanddewi. He was a Grocer prior to the war and enlisted at Llanelli into the army. He was posted to the 24th Battalion, Welsh Regiment, which had been formed in Egypt during February 1917, from two dismounted Regiments; the Pembrokeshire Yeomanry and the Glamorganshire Yeomanry. The battalion formed part of 231 Brigade, 74th Yeomanry Division, which was sent to France in May 1918, landing at Marseilles on 7 May 1918. The Division was initiated into trench warfare in Flanders before being posted south to take part in the offensive against the Hindenburg Line. It moved into positions past Péronne, and took up positions south of Épehy, facing the outpost defences of the Hindenburg Line. The 74th Division launched its assault against the Germans in the vicinity of Lempire and Ronssoy on 18 September 1918, and over the coming days saw heavy fighting, during what is known as the Battle of Épehy. On 21 September the 24th Welsh were tasked with the capture of the German stronghold of Gillemont Farm, and suffered terrible casualties there. William was among the many men killed here on 21 September 1918. He was 21 years old and is commemorated on the Vis-en-Artois Memorial, France. 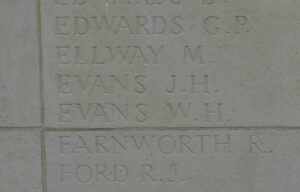 Albert Victor Eynon, Private, 15052, Royal Welsh Fusiliers. Albert was born in Llanddewi to Thomas and Mary Eynon, of Henllan Lodge. He worked as a farm servant prior to the war and enlisted at Tonypandy, into the 10th Battalion, Royal Welsh Fusiliers. The battalion had been formed at Wrexham during September 1914, forming part of 76 Brigade, 25th Division. The Division landed at Boulogne on 27 September 1915, and moved to the Vimy area. 76 Brigade (including the 10th RWF) was then transferred to the 3rd Division, which was on the Somme. The division saw heavy fighting throughout the Somme offensive during the summer of 1916, and after wintering there moved to Arras by May 1917. It took part in the Battle of Arras, playing a major role in the First and Second Battles of the Scarpe, and at the Battle of Arleux and the Third Battle of the Scarpe, where the division captured Roeux. The division spent the early weeks of September 1917 training and rebuilding, before entraining at Bapaume on 17 September to begin its move to Flanders, in order to take part in the Third Battle of Ypres. The division moved through the city of Ypres on 25 September and the following day launched its assault towards Zonnebeke. Albert was mortally wounded during the attack, and died of his wounds on 30 September 1917, aged 25. He is buried in Brandhoek New Military Cemetery, Belgium. Many thanks to Les Nixon and Tudor Eynon for the photo of Albert. 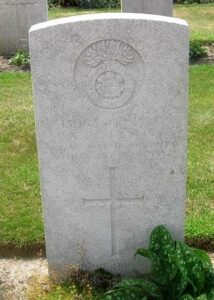 Willie James Eynon, Private, 302364, Manchester Regiment. Willie was born in Llanddewi, the son of Alfred and Anne Eynon, of 1, Llandaff Row. He enlisted in nearby Narberth, and was posted to the 2/8th Battalion, Manchester Regiment. The battalion was formed at Ardwick during August 1914, and became part of 199 Brigade, 66th Division. The battalion landed at Boulogne on 14 March 1917, and the entire division then concentrated around Bethune before taking up the front line for the first time near Annequin, for trench initiation. It remained in the Cambrin sector until the end of June 1917, before moving via St. Pol to the Flanders coast, taking up the front line around Oost Dunkuerqe. On 4 August 1917 the battalion was in the line facing Nieuport when it came under fire, and sustained three men killed and one man wounded. Willie was one of the men killed that day. He was 24 years old and is buried in Coxyde Military Cemetery, France. Many thanks to Les Nixon and to Tudor Eynon, for the photo of Willie. 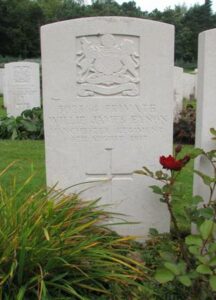 Gad Griffiths, Private, 28946, South Wales Borderers. Gad was the son of Thomas and Elizabeth Griffiths, of Carminefawr, near Clynderwen. He enlisted at Narberth into the 5th Battalion, South Wales Borderers, which formed part of 58 Brigade, 19th Western Division. The Division played a large part in the Great War, fighting in all the major actions on the Western Front since moving to France during July 1915, and saw heavy fighting on the Somme in 1916, especially during the opening assault on Ovillers-La Boiselle. During 1917 the division took part in the Battle of Messines, and later that year in the latter stages of the Third Battle of Ypres The division was caught up in the German offensive on the Somme in March 1918, before being moved to Flanders to rest, and was caught up in the second German offensive on the Lys. It was then moved south to the quieter Aisne sector to rebuild, but unfortunately the Germans launched their third assault here in May 1918, and the division was again battered. It rebuilt before moving north again to take part in the advance on the Hindenburg Line. By 17 October the 4th Army, to which the 19th Division was attached, held the high ground west of the Selle from south-west of Haussy to just north of Montrecourt. The 19th Division moved into position here on the night of 17/18 October in readiness to resume the advance. During the night of 19/20 October patrols from the division had entered the town of Haussy, and during the morning of 20 October 1918 the entire division began its advance, crossing the River Selle at 02.00. Gad was killed in action during heavy fighting around Haussy on 20 October 1918, aged 25. He is buried in St. Aubert British Cemetery, France. 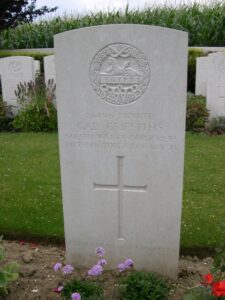 Henry John, Private, 202910, South Lancashire Regiment. Henry was born near Clynderwen, the son of Thomas and Naomi John, of Brynhill. He enlisted at Nantwich into the army, and was posted to the 2/4th Battalion, South Lancashire Regiment, which formed part of 172 Brigade, 57th Division. The battalion landed at Boulogne on 15 February 1917, and the entire division assembled around Bailleul. By 24 February the division had moved into the Nursery Sector at Bois Grenier, for its period of trench initiation alongside the battle hardened Australians. Over the coming weeks the various units of the 57th Division spent time rotating between front line duties, reserve and support. Henry was wounded while the battalion was in the front line at the Rue de Bois sector during the first days of June 1917, and was invalided to hospital at St. Omer. He died of his wounds on 7 June 1917, aged 32, and is buried in Longuenesse (St. Omer) Cemetery, France. 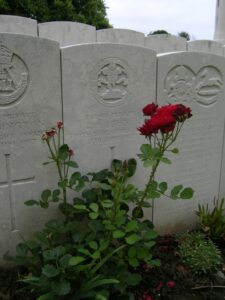 Richard Thomas Phillips, Private, 54566, Welsh Regiment. Richard was the son of Evan and Margaret Phillips, of Commercial Cross, Llanddewi Velfrey, Narberth. He enlisted at Ammanford into the 4th (Reserve) Battalion, Welsh Regiment, and was posted to France in 1916, joining the 9th Battalion, Welsh Regiment, which was on the Somme attached to 58 Brigade, 19th (Western) Division. The division had taken a hammering on the Somme in 1916, and in 1917 moved to positions south of Ypres. It took part in the Battle of Messines in June 1917, and had a brief period of rest before taking part in the latter stages of the Third Battle of Ypres. Early in 1918 the division was in positions north east of Bapaume, and on 21 March 1918 was among those divisions hit hard by the German Spring Offensive. The 19th Division fought a desperate rearguard action over the coming days, with the 9th Welsh making a name for itself during the brave defence of the village of Beugny, which covered the withdrawal of the remainder of the division. Richard was killed in action here on 26 March 1918, aged 32. He is buried in Delsaux Farm Cemetery, Beugny, France. 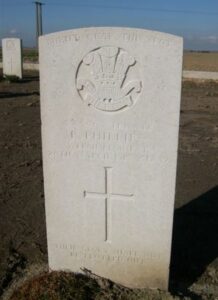 William Bowen Stephens, Private, 282274, Lancashire Fusiliers. William was born in Llanddewi on 26 February 1896, the son of Catherine Stephens, of the Park y Lan Inn. Catherine married William Thomas in 1900, and the family lived at Park y Lan. William enlisted at Cardiff into the army, and was posted to the 2/7th Battalion, Lancashire Fusiliers, which formed part of 197 Brigade, 66th Division. The Battalion landed at Havre on 28 February 1917, moving to the Nursery Sector around Givenchy. The battalion took up the front line trenches at Beuvry for the first time on 15 March 1917, starting a period of trench initiation alongside the experienced 5th Division, and two days later were the recipients of an intense artillery barrage which was followed by a trench raid by the Germans. Over the following weeks the battalion took turns both in the front line and in reserve and support, rotating with the other divisional troops. On 13 April 1917 the battalion moved into the front line trenches on the Givenchy right sub-sector, for a five day spell. On the afternoon of 18 April 1917, William was selected to be among a party of 2 officers and 24 other ranks who had been tasked with a trench raid on the German lines opposite, in order to gain identification. The party made its way across No Man’s Land, but found the Germans to be fully alert, and came under heavy fire, forcing them to retire. William was among the reported casualty list of four men wounded and five missing, but his body was never found. He was 21 years old and is commemorated on the Loos Memorial, France. The photo of William is courtesy of Narberth Museum. 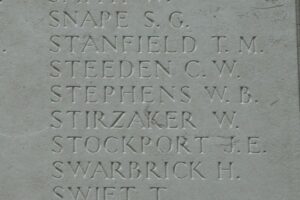 Thomas Clifford Gibby, Third Officer, Merchant Navy. Thomas was the son of John and Sarah Gibby. He married Betty John, of Llanddewi Velfrey in 1939, prior to going to sea with the Merchant Navy, aboard the S.S. Newton Pine, a Cardiff registered merchant steamer. On 16 October 1942, Newton Pine was en route from Hull for Halifax, Nova Scotia, and was straggling from Convoy ONS-136, when she was torpedoed and sunk by the German submarine U-410 about 500 miles south-east of Iceland, with the loss of all her crew of 47. Thomas was 31 years old when he died that day, and is commemorated on the Tower Hill Memorial, London. Thomas is not commemorated at Llanddewi. 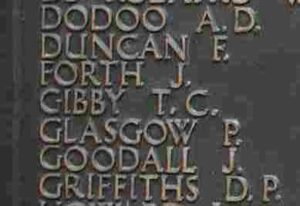