Little Newcastle is a parish in the hundred of Kemmes, which derives its name from an ancient mound near the church, called The Castle, and is situated just over eight miles north-east of Haverfordwest. The War Memorial to the fallen of the parish is situated in St. Peter’s Churchyard. These men are commemorated below. 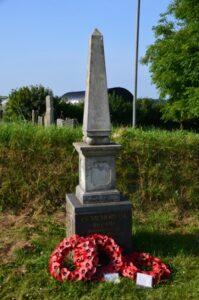 Benjamin George Evans, Artificer Engineer, Royal Navy. Benjamin was the son of William Evans, of Martell Factory, Little Newcastle. He had enlisted into the Royal Navy prior to the war, and had married Hannah Sarah Vigors in Glamorgan in 1904. When war erupted, Hannah was residing at 31 Laburnum Grove, North End, Portsmouth, with their son, William Cornelius Evans. Benjamin served aboard the Battleship HMS Queen Mary. She was attached to the 1st Battlecruiser Squadron, and had seen action during the Battle of Heligoland Bight shortly after the war began. Queen Mary took part in the Battle of Jutland on 31 May 1916. She was hit twice by the German battlecruiser SMS Derfflinger during the famous Run to the South, and exploded shortly afterwards. Benjamin was killed in the explosion. He was 34 years old, and is commemorated on the Portsmouth Naval Memorial, Hampshire. 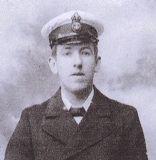 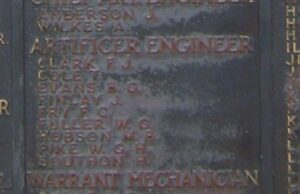 William Lewis Howells, Gunner, 102610, Royal Garrison Artillery. William was born at Trecwn, the son of William and Martha Howells. He married Charlotte Morris on 5 January 1915, although the couple had been living together as husband and wife for almost nine years prior to this, at Llanfair Cottage, Trecwn. William enlisted at Letterston into the Royal Garrison Artillery on 11 December 1915. He spent the next twelve months in England, before joining the BEF in France in December 1916, and was posted to the 121st Heavy Battery, RGA. William was wounded in action at Arras on 25 April 1917, and admitted to Hospital at Rouen, where he remained until 9 June 1917. He was then posted to the 2nd (London) Heavy Battery, RGA, which was at Ypres. William was killed in Action at Ypres during the Battle of Passchendaele on 22 August 1917, aged 37, and was buried on the battlefield. His body was later exhumed, and reburied in Ypres Town Cemetery Extension, Belgium. Due to the devastation of Ypres during the war, the exact location of William’s grave within the cemetery is unknown, and he is remembered on Special Memorial 6. He left four children, Martha, David, Thomas and Daniel. 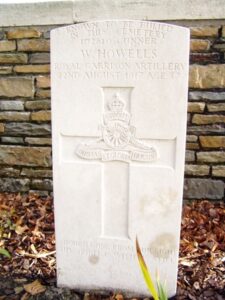 David Jones, Private, 48235, South Wales Borderers. David was the son of Isaac Arnold Jones and Jane Jones, of Little Newcastle. He enlisted at Haverfordwest into the Army Service Corps, but was later transferred to the 7th Battalion, South Wales Borderers. The battalion was attached to 67 Brigade, 22nd Division, and crossed to France in early September 1915. On 27 October 1915 the Division embarked for Salonika, and remained here for the rest of the war. David was killed on 18 September 1918, during the Second Battle of Doiran. He was 26 years old, and is commemorated on the Doiran Memorial, Salonika. 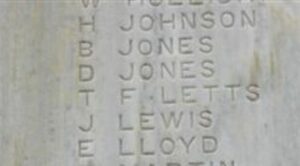 Frank Parry, Lance Corporal, 266, Welsh Guards. Frank was born at Little Newcastle on 23 May 1895, the son of John Jenkyn Parry and Caroline Raymond Parry. The family later moved to Pencraigfargoed, Treharris, Glamorgan. Frank enlisted at Merthyr into the Grenadier Guards, but transferred into the 1st Battalion, Welsh Guards, which had formed on 26 February 1915. The battalion moved to France in July 1915 attached to 3rd Guards Brigade, Guards Division. The Welsh Guards saw their first major action at Loos in September 1915. In the summer of 1916 they moved to the Somme, where they fought at the Battle of Flers-Courcelette. Frank was wounded at Flers, and died on 22 September 1916. He was 21 years old, and is buried at Heilly Station Cemetery, Mericourt-L’Abbe, France. Frank is not commemorated locally. 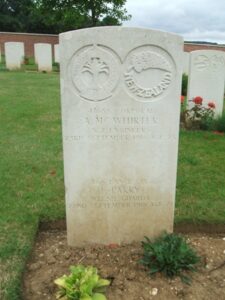 James Lloyd Thomas, Private, 285170, Gloucestershire Regiment. James was the son of Arthur and Maria Thomas, of Little Newcastle. He enlisted at Carmarthen into the army, and was posted to the 2/6th Battalion, Gloucestershire Regiment, which was attached to 183 Brigade, 61st (2nd South Midland) Division. The Division moved to the Western Front in May 1916, moving to positions at Fromelles. The first major action in which the Division was engaged was the disastrous attack at Fromelles on 19 July 1916, a subsidiary action to the much larger battle taking place further south on the Somme. The Division suffered very heavy casualties, and was not used again other than for holding trench lines until 1917. In March the Division followed the German withdrawal from the Somme to the Hindenburg Line. Later that year it fought at Battle of Langemarck, part of the Third Battle of Ypres. The Division then moved south, where it took part in the Battle of Cambrai, from 20 November 1917. James was killed here on 2 December 1917. He was 20 years old, and is commemorated on the Cambrai Memorial, Louverval, France. 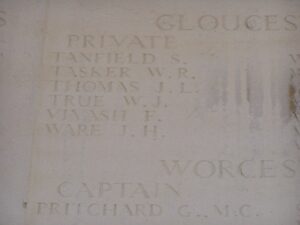 Dale Kenneth Canfield, Second Lieutenant, U.S. Army Air Force. Dale was from Chapman, Kansas, the son of Charles Clinton Canfield, and Ora Canfield. He served as a Co-Pilot with the 66th Bomber Squadron, 44th Bomber Group, U.S.A.A.F., which was equipped with the Boeing B-17 Flying Fortress. On 3 January 1943, Dale was Co-Pilot of a B-17 which took part in a raid on the U-Boat pens at St. Nazaire, France. Eight out of a force of thirteen managed to hit their targets, and turned for home, but got lost, mistaking the Irish Sea for the English Channel. Running low on fuel, the B-17’s headed for airfields in South Wales, with three being forced to crash-land. One of the B-17’s crash-landed at New House Crossroads near Little Newcastle, and Dale was killed in this crash, on 3 January 1943. The spot is marked by a commemorative plaque. He is buried at Cambridge American Cemetery, and is commemorated by a wooden plaque inside St. Peter’s Church at Little Newcastle. 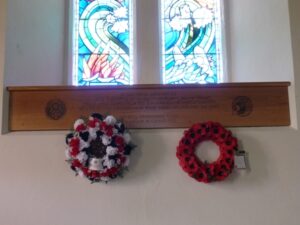 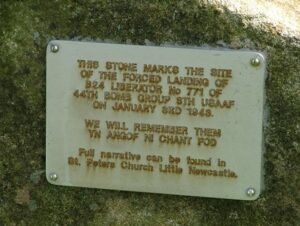 Frederick Albert James, Private, 205569, Royal Army Service Corps. Frederick was born at Penfeidr, Ambleston on 26 November 1919, the son of Osborne and Dinah James (nee Thomas). He married Phyllis Priscilla Davies, of Freystrop, at Haverfordwest early in 1942, prior to embarking for North Africa with the Royal Army Service Corps. He died in Egypt on 23 October 1942, aged 22, and is buried in Fayid War Cemetery, Egypt. The photos of Fred and his grave are courtesy of Emrys Inker. 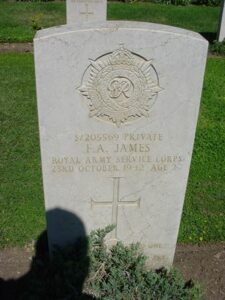