Lawrenny is situated on the upper reaches of the estuary of the River Cleddau, and was once home to a thriving boat building industry, having a quay which was used to export locally mined coal. The Parish Church is dedicated to St Caradoc, and dates back to at least the twelfth century, overlooking the village across to the estuary. Inside the Church are the Parish War Memorials, to the men of the area who fell during both World Wars. 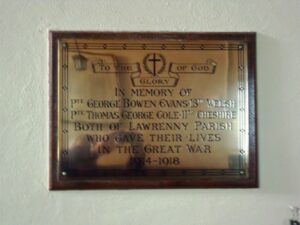 Thomas George Cole, Private, 263014, Cheshire Regiment. Thomas was born on 8 October 1892, the son of Benjamin and Martha Cole, of The Village, Lawrenny. Thomas worked at Goodwick for the Great Western Railway prior to the war, before enlisting into the Pembroke Yeomanry. He was transferred into the Welsh Regiment in 1915, remaining on home service until sometime after marrying Mary Elizabeth Harries, of Pulth Green, Pendine, towards the end of 1917. Thomas was then posted to the 11th Battalion, Cheshire Regiment, with a new service number, 263014. The Battalion had been formed at Chester in September 1914, attached to 75 Brigade, 25th Division, and was at Bullecourt, in Northern France when Thomas joined up with it, in support of the Division which had been hit by the German offensive, which had begun on the Somme on 21 March 1918. The Division moved north to Flanders on the night of 30 March 1918, where they took up positions at Ploegsteert again, where they received reinforcements, and rebuilt. However, on 9 April the Germans launched an offensive on the Lys, and the Division was caught up in the terrible fighting here, suffering terrible casualties over the coming weeks, before being posted to the Aisne to rebuild. However, on 26 May they took up positions south of the Aisne, to guard against a predicted German Offensive. On 27 May 1918 the attack hit them, and during the coming days the Division was virtually annihilated. Thomas must have been captured by the Germans at some time during this chaotic period, and brought to a POW camp in Germany. He died in Germany on 5 December 1918, aged 26, and was buried in Berlin South Western Cemetery, Germany. 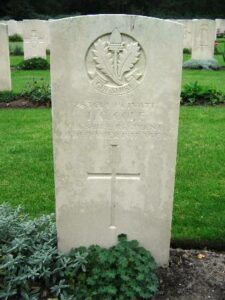 George Bowen Evans, Private, 35365, Welsh Regiment. George was born on 26 November 1892, the son of Mary Evans, of Tedion, Lawrenny. He worked as a Railway Clerk for the Great Western Railway at Llangeinor prior to the war, and enlisted at Cardiff into the Welsh Regiment. George was posted to France, joining the 13th Battalion (2nd Rhondda), Welsh Regiment, which was attached to 114 Brigade, 38th (Welsh) Division. On 2 December 1915 the battalion moved to France, and the entire Division moved to the Fleurbaix sector, where it was initiated into trench warfare. During June 1916 the Division marched south to the Somme, and on 7 July 1916 attacked Mametz Wood. The initial attack failed, and it was three days later, on 10 July, that a fresh attack was mounted. George was killed in action during the fighting within Mametz Wood on 10 July 1916. He was 23 years old, and is commemorated on the Thiepval Memorial, France. 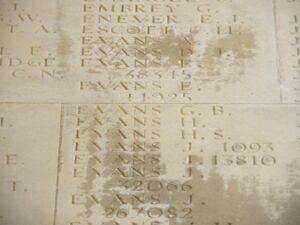 Albert Markham Hood Phillips, Commander, Royal Navy. Albert was born at Dartmouth on 20 March 1876, the son of Captain john Phillips, Royal Navy, and Martha Phillips (nee Hood). His mother was from Lawrenny and Albert was baptised at Lawrenny Church on 30 September 1877. Albert followed in his fathers footsteps and enlisted into the Royal Navy as a Midshipman on 15 July 1892. Albert married Feodora Couchman Andrews in Sussex in 1901. Over the coming years Albert steadily rose through the ranks as he passed a series of demanding proficiency courses and by 31 December 1910 had been promoted to Commander. During these years he had served on a wide variety of vessels and shore bases, then on 2 February 1914 was posted aboard the Formidable-class battleship HMS Bulwark. When war was declared, Bulwark was in reserve with the Home Fleet. She was then attached to the reformed Channel Fleet to protect the British Expeditionary Force as it moved across the English Channel to France. On 26 November 1914 she was at anchor off Sheerness when a massive internal explosion tore through her, killing some 741 men and sending her shattered remains to the bottom of the Medway estuary. A naval court of enquiry was held two days later which concluded that the explosion had occurred due to the improper storage of cordite charges near to a boiler bulkhead. Albert was 37 years old when he was killed in the explosion and is commemorated on the Portsmouth Naval Memorial, Hampshire. He is not commemorated on the Lawrenny war memorial. 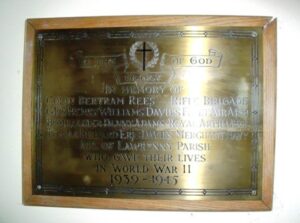 Daniel Adams, Bombardier, 818345, Royal Artillery. Daniel was the  grandson of James and Margaret Adams, of Lawrenny, and the son of Mary Ann Adams. He resided with his wife, Edith May Adams, at Cresselly prior to the war, and was a regular soldier, serving with 10 Field Regiment, Royal Artillery. The regiment was on the Belgian frontier at the outbreak of war, attached to the 2nd Division, and took part in the retreat to Dunkirk. Daniel was wounded during the retreat, and was evacuated from Dunkirk at sometime between 27 May and 2 June 1940. He died of his wounds on 2 June 1940, aged 28, and is buried at Lawrenny (St. Caradog) Churchyard. 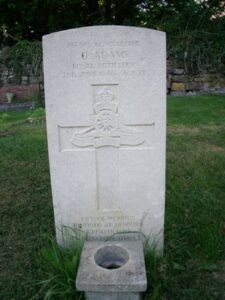 Henry William Davies, Air Fitter, FAA/F. 55017, Royal Navy. Henry was born in 1907. He was a pre-war regular with the Royal Navy, and served with the Fleet Air Arm, as an Air Mechanic aboard the aircraft carrier HMS Courageous. Courageous served with the Home Fleet, with 811 and 822 Squadrons aboard, each equipped with a dozen Fairey Swordfish. On 31 August 1939 she went to her war station at Portland and embarked the two squadrons of Swordfish, departing Plymouth on the evening of 3 September 1939 for an anti-submarine patrol in the Western Approaches. On the evening of 17 September 1939, she was on patrol off the coast of Ireland, and whilst turning into the wind to launch her aircraft, was struck by two torpedoes from the German submarine U-29. She capsized and sank in 20 minutes with the loss of 519 of her crew, including Henry. Henry was 32 years old, and is commemorated on the Lee-on-Solent Memorial, Hampshire.

Temple Bernard Eric Davies, Seaman, Merchant Navy. Temple was born in June 1928, and lived at Ferry House, Cosheston. He served with the Merchant Navy aboard the S.S. Empire Lord. Temple was found drowned in the dock at Buenos Aires on 3 March 1946. Nothing further is known of him, as he is not commemorated by the CWGC. He is most probably buried there in the Cementerio Británico.

Colin Bertram Rees, Rifleman, 6913267, The Rifle Brigade (Prince Consort’s Own). Colin was the son of Thomas Bertram and Elsie Laura Rees, of Garron Farm, Lawrenny. He served with the 1st Battalion, Rifle Brigade, which formed part of 22 Armoured Brigade, attached to the 7th Armoured Division. The Division was otherwise known as the Desert Rats, and fought in the North African campaign, and at Salerno, before returning to Britain, in readiness for Operation Overlord. The Division landed at Gold Beach by 7 June 1944. The Division took part in the break-out from the Normandy beachhead, and the subsequent drive through northern France and Belgium into Holland, and then took part in the drive towards Hamburg. Colin was killed during the Battle for the Roer Triangle on 29 January 1945. He was 33 years old, and is commemorated on the Dunkirk Memorial, France. 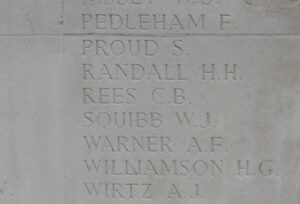