Jordanston is a small village situated about four miles south-west of Fishguard. The men of the village who fell during both world wars are commemorated on the village War Memorial, which is situated inside St. Cawdra’s Church, and placed in the church when its original home, Tredafydd School, was closed. Alongside is a separate plaque for Norman Phillips, a parishioner who fell during WW2. These men are commemorated below. Many thanks to Mike Berrell for the photographs of the memorials. 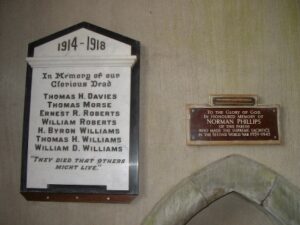 Thomas Henry Davies, Private, 60663, Welsh Regiment. Thomas was born at Jordanston Hill, and enlisted at Cardiff into the Welsh Regiment. He was posted to the Mediterranean, where he joined the 24th Battalion, Welsh regiment. The battalion had been formed in 1917 by the merging of the Pembroke and Glamorgan Yeomanry, and was attached to the 231 Brigade, 74th (Yeomanry) Division. The Division had formed in Egypt in January 1917 and had fought through the Palestinian Campaign, at the Battles of Gaza and the Battle and capture of Jerusalem. Thomas was killed in action during the Third Battle of Gaza, on 27 December 1917. He is commemorated on the Jerusalem Memorial, Israel. 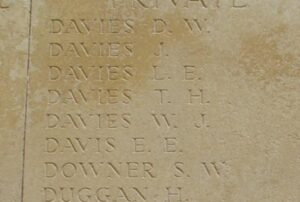 Tom Morse, Sergeant, M/321457, Army Service Corps. Tom was the son of Thomas and Mary Morse, of Durbach Farm, Durbach. Tom was a traction engine-driver before the war, and attested to serve with the Motor Transport arm of the Army Service Corps in December 1915, being called up in May 1917. Not much is known of Tom’s service in the War, but it is doubtful if he made it to France, serving instead with ‘V’ Company, ASC at Cambridge. Sadly, Tom became ill with pneumonia towards the end of the war, and died at Colchester Military Hospital on 26 October 1918 aged 32. He is buried in Fishguard (Hermon) Baptist Burial Ground. His service papers show that money was being stopped from his wages for an illegitimate child, the son of Martha Nicholas, of Jordanston, Pembroke, born on 23 July 1913. No more is known of Tom’s son. 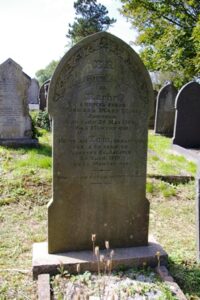 Ernest Roland Roberts, Able Seaman, R/3435, Royal Naval Volunteer Reserve. Ernest was born on 9 November 1897, the son of William and Anne Roberts, of the Post Office, Dwrbach. He enlisted on 7 November 1916 into the Pembroke Yeomanry, and transferred to the RNVR, for service with the Royal Naval Division four days later. Ernest was posted to France, where he joined Nelson battalion, 63rd (Royal Naval) Division, on 27 September 1917, and took part in the Battle of Passchendaele. Ernest was gassed on 3 November, which brought on pneumonia. He was invalided to Britain on 8 December 1917, and after several months recuperating, went back to France on 6 August 1918, joining Hawke Battalion. Ernest was shot in the right leg on 29 September, and invalided to the UK again on 3 October 1918. He was demobilised at Chisledon on 27 December 1918, as being disabled, with gas and gunshot wounds. Ernest died on 4 March 1922, as a result of his wartime service, but is not commemorated by the CWGC.

William George Roberts, Private, 35322, Kings Shropshire Light Infantry. William was born at Neyland, and enlisted there into the Army, joining the Training Reserve Battalion. From there he was posted to the 7th Battalion, King’s Shropshire Light Infantry, which was attached to 76 Brigade, 3rd Division. The division had been in France since the outbreak of war, and had fought at most of the major battles that followed. In November 1917 the Division fought at the Battle of Cambrai, and they were in the area during March, 1918 when the German Spring Offensive swept through the British lines, fighting at the Battle of St Quentin and the First Battle of Bapaume. William was killed on the second day of the fighting, on 22 March, 1918. He has no known grave, and is commemorated on the Arras Memorial, France. 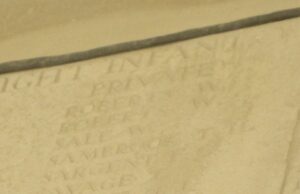 Henry Byron Williams, Second Engineer, Mercantile Marine. Henry was born in Battersea in 1886, the son of Isaac Benjamin Williams and Jane Williams. His father was from Trevine and later moved the family to Scleddy Park, Manorowen. Henry married Mary Muriel Evans, of 197, Coventry Road, Ilford, Essex in 1916. He was an engine fitter and served with the Mercantile Marine, aboard SS Polperro. On 19 July 1918 Polperro was steaming from Marseilles for Sicily, through the Strait of Sicily, when she was torpedoed by the German submarine UC-54. The ship managed to limp to safety in Tunisia but three men were killed in the explosion, one of whom was Henry, who was 32 years old. Henry and two other men were buried at Bizerta Cemetery, Tunisia.

Thomas Henry Williams, Private, 267123, Welsh Regiment. Thomas was born at Abercastle on 9 December 1886, the son of John and Margaret Williams, of Skeddy, Fishguard, and the husband of Mary Anne Williams, of Park Cottage, Dwrbach. He enlisted at Fishguard on 30 May 1916 into the 17th Battalion, the Welsh Regiment, a Bantam Battalion which formed part of 119 Brigade, 40th Division. The Division landed in France during June, 1916, and fought on the Ancre, before moving toward the Hindenburg Line following the German withdrawal in early 1917. Thomas joined the Battalion on 7 December 1917, when the Division was in the thick of the Battle of Cambrai. This is where John was sadly Killed in Action aged 30, on 27 December 1917. He is buried in St. Leger British Cemetery, France. Sadly, he left behind his widow Mary Ann, and eight children, one of whom, William John Williams, was killed during World War Two. 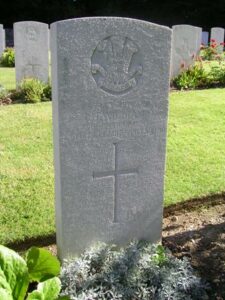 William David Williams, Private, 36949, Welsh Regiment. William was the son of Thomas and Maria Williams, of Llangloffan Cross. He enlisted at Ferndale into the South Wales Borderers, but  after landing in France on 5 May 1915 was transferred into the 2nd Battalion, Welsh Regiment, which was attached to 3 Brigade, 1st Division. The Division had been one of the first to arrive in France, fighting at the retreat from Mons to the Marne, where the Germans were stopped. They then fought at the Aisne, and at Chivy, before being moved north to Ypres. Here they fought at the First Battle of Ypres, where they again stopped the German Offensive, before wintering in Flanders. The following year saw them in action again at the Battle of Aubers, before moving South to Loos, where they fought during the Battle of Loos, and the action at the Hohenzollern redoubt. Again they were required for a major offensive, moving south to the Somme, where they fought during the opening of the Somme Offensive at the Battle of Albert. William was wounded on the Somme, and died on 12 September 1916, aged 24. He is buried at Millencourt Communal Cemetery Extension, France. 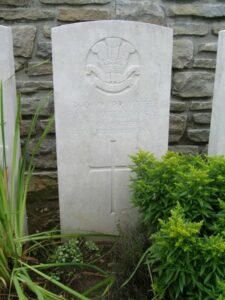 Norman Phillips, Stoker 2nd Class, D/KX 666339, Royal Navy. Norman was born at Jordanston Hill on 20 August 1925. He served with the Royal Navy aboard the Black Swan class Sloop, HMS Kite. She was one of a successful class of submarine hunters and had taken part in the destruction of five German U-Boats between 24 June 1943 and 9 February 1944. On 21 August 1944 Kite was escorting the aircraft carriers Vindex and Striker, which formed part of a larger escort taking convoy JW-59 to Northern Russia, when the convoy was sighted in the Barents Sea by German aircraft. The aircraft signalled the location of the convoy to awaiting U-Boats and within hours their attack began. During the early hours of the morning, Kite was struck by two torpedoes which had been fired by U-344 and sank. Out of her crew of 10 officers and 207 ratings, 60 originally survived, but the freezing water claimed the lives of 46 of these. Norman had just turned 19 years old when he died that day and is commemorated on the Plymouth Naval Memorial. He is commemorated on a memorial plaque next to the Great War memorial and also by a stained glass window within the Church. 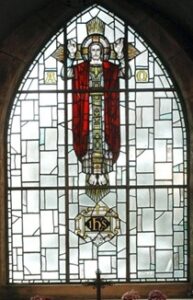