Jameston is a small village situated on the A4139 road between Lamphey and Penally, just a mile north-west of Manorbier and midway between Tenby and Pembroke. The war memorial at Jameston is in the form of a wooden religious panel, and commemorates the twelve men of the village who fell during the Great War. These men are also commemorated at Manorbier. 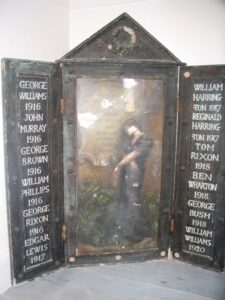 William George Brown, Sapper, 69431, Royal Engineers. William was born at Robeston Wathen on 19 November 1882, the son of Thomas and Margaret Brown. He had trained as a Carpenter, and had six years service with the Pembroke Yeomanry prior to the Great War. William married Annie Phillips, of Jameston, Manorbier in 1901, and the couple had seven children. He enlisted at Pembroke into the Royal Engineers on 2 March 1915, and was posted to France on 9 August 1915 to join the 63rd Field Company, RE, which was attached to the 9th (Scottish) Division. The Division saw its first major action during the Battle of Loos. They then took part in the Battle of the Somme, fighting at the opening Battle of Albert, and then at the Battle of Bazentin, where they captured Longueval. William was killed in action at Longueval on 17 July 1916, aged 33, and is remembered on the Thiepval Memorial, Pier & Face 8 A & 8 D. 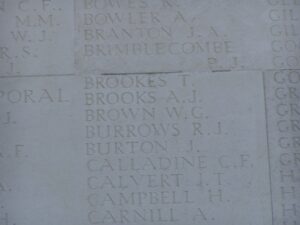 George Thompson Bush, Leading Victualling Assistant, M/2588, Royal Navy. George was born on 30 December 1895,  the son of Henry Charles Bush and Emma Bush, The Sozar, Manorbier. His father Henry had been a long serving seaman with the Royal Navy, and George followed in his father’s footsteps, and served aboard H.M.S. Lion. Lion was the flagship of Admiral Jellicoe in the Battle of Jutland. He survived the war, but eventually died at home of sickness on 18 October 1918. He is buried in the north part of Manorbier (St. James) Churchyard. 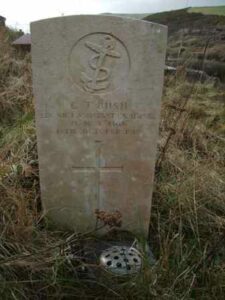 Reginald Humphrey Harrington, Private, 7020, Australian Infantry. Reginald was born at Manorbier, the son of Joseph and Kezia Harrington of Tudor Lodge. Reginald was 19 when he emigrated with his brother to Australia, and was living with him at Wagin, Western Australia when they both decided to enlist. His brother William was the first in France and the first to die, with Reginald sailing later, as part of the 23rd reinforcements for the 16th Battalion, AIF on 23 December 1916 from Fremantle. Reginald arrived in England on 11 March 1917, and joined up with the Battalion at Havre on 8 June 1917. The 2nd Australian Division was sent to Ypres, where it fought in the Battle of Passchendaele. Reginald was wounded at the opening Battle of Messines. Reginald Died of Wounds on 6 August 1917 aged 23, and is buried at Kandahar Farm Cemetery, in Grave II. G. 3. His brother William also fell. 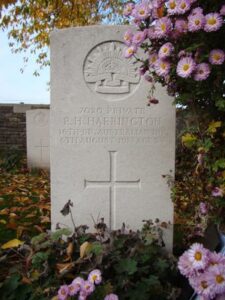 William Joseph Harrington, Private, 6525, Australian Infantry. William was born in Boscombe, near Bournemouth, and was the son of Joseph and Kezia Harrington, of Tudor Lodge, Manorbier. After being educated at Manorbier, he worked as an Agricultural Labourer, but also served in the Pembroke Yeomanry prior to emigrating to Australia. In Australia, he worked on the railways as a Platelayer at Wagin, Western Australia, and enlisted into the Australian Imperial Force at Perth, being enrolled into the 16th Battalion, AIF, part of the 4th Brigade, 2nd Australian Division. William was part of the 21st reinforcements for his Battalion, and they embarked at Fremantle on 13 October 1916. William was lucky enough to miss the bloodshed of the Somme battles which the Australian forces went through, but was wounded and captured at Armentieres. He Died of Wounds on 10 May 1917, aged 33, at Saltau P.O.W. Camp, Germany. He is buried at Hamburg Cemetery, Germany, in Grave IV. G. 14. His brother William also fell.

Edgar Lewis, Sergeant, 725073, Royal Field Artillery. Edgar was born in Monkton, the son of John and Margaret Lewis, of Rose Villa, Jameston, Manorbier. He enlisted at Neath into the 2nd (Glamorgan) Battery, 1st (Welch) Brigade, Royal Field Artillery, which served with the 53rd (Welsh) Division. Edgar served with the Division throughout their campaign on Gallipoli, and was with the Division in Egypt when he Died on the 23rd March 1917, aged 31. Edgar is buried at Alexandria (Hadra) War Memorial Cemetery, Egypt in Grave D. 93.

John Claude Murray, Second Lieutenant, South Wales Borderers. John was born in 1884, the son of William and Elizabeth Murray. He was commissioned into the 2nd Battalion South Wales Borderers, who were in Tientsin, China at the outbreak of War. After a famous encounter with German forces at Lao Shan, they returned to Hong Kong, where they embarked for the U.K. on the 4th December, 1914. They arrived at Plymouth on the 12th January, 1915, and here they were attached to the 87th Brigade, 29th Division. The Division sailed from Avonmouth on the 16th March, 1915 and landed at Egypt, from where they embarked to Mudros on the 10th April. They landed at Cape Helles, Gallipoli, on the 25th April 1915, and remained there for the duration, suffering heavy casualties. On the 2nd January 1916 the Division was withdrawn from Gallipoli, and landed at Marseilles (via Egypt) on the 29th March, 1916. The first engagement for the Division was at the opening of the Battle of the Somme, between Beaumont Hamel and Thiepval, where the 2nd S.W.B. suffered heavily. John was Killed in Action on 9 July 1916, and is remembered on the Thiepval Memorial, Pier and Face 4 A. 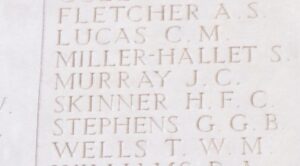 William Phillips, Private, 27695, Royal Welsh Fusiliers. William was born in Manorbier in 1885, the son of William and Sarah Phillips. He married Mary Price on 25 April 1903, and the couple set up home at 220, Stanstead Road, Forest Hill, London. William enlisted at Holborn on 16 May 1915 into the 17th Battalion Royal Welsh Fusiliers. After training at Colwyn Bay, from 14 July 1915 onwards the battalion became part of 115 Brigade, 38th (Welsh) Division. After their inauguration into trench life in the Armentieres sector, the Division were brought to the Somme, to participate in an attack on Mametz Wood. Here they suffered terrible casualties, and took longer to take the Wood than the Army Top Brass had planned, which unjustly gave their reputation a battering. William was Killed in Action during the opening attack on the wood, on 10 July 1916, Aged 32. He is buried in Caterpillar Valley Cemetery, Longueval, in Grave X. F. 18. 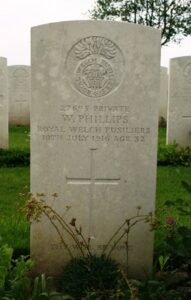 George Rixon, Private, 37712, Welsh Regiment. George was born in Tenby, the son of William and Fanny Rixon. The family resided in Manorbier before the war. He enlisted at Pembroke into the 8th Battalion, the Welsh Regiment, part of 40 Brigade, 13th (Western) Division, but in January 1915 they became the Pioneer Battalion to the Division. On 7 June 1915 the Division received orders to move to the Mediterranean. They left the U.K. on 12 June, and landed at Cape Helles, Gallipoli on 6 July 1915. They were later withdrawn to Mudros before being landed on ANZAC Cove on 3 August, fighting through the Battles of Sari Bair, Russell’s Top and Hill 60 before transferring to Suvla Bay, in defensive duties. It was at Suvla Bay that George was wounded. He was transferred to Hospital Ship, but Died of Wounds on-board, and was buried at sea the same day, on 4 December 1915, aged 20. George is remembered on the Helles Memorial, Turkey on Panel 140 to 144. His brother Thomas also fell. 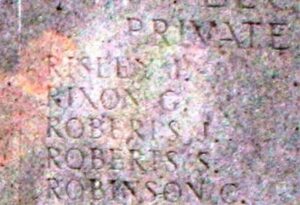 Thomas Rixon, Pioneer, 26756, Royal Army Service Corps. Thomas was born in Manorbier, the son of William and Frances Rixon, of Jameston, Manorbier. He enlisted at Pembroke in November 1914 into the Pembroke Yeomanry, but was discharged on 19 October 1915 after being deemed unfit for service. Thomas the re-enlisted into the 344th Road Construction Company, Royal Army Service Corps, and later transferred into the 334th Road Construction Company, Royal Engineers. Thomas Died of Sickness in Hospital at France on 5 November 1918, aged 28 and is buried at St. Sever Cemetery Extension, Rouen, in Grave S. II. Y. 28. His brother George also fell. 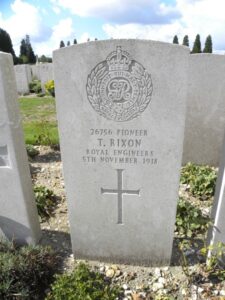 Benjamin Wharton, Private, 226088, King’s Shropshire Light Infantry. Benjamin was born in Lamphey in 1885, the son of William and Maria Wharton. He enlisted at Llanelli into the Cheshire Regiment, but transferred into the 10th Battalion, King’s Shropshire Light Infantry, part of the 231st Brigade, 74th Division. The Division fought in the Palestinian Campaign before being sent to France, landing at Marseilles during May 1918. The British and Dominion Armies had suffered terrible losses during the German Spring Offensive, and the 74th Division were rushed back to reinforce the front. Here they fought in the Battle of Bapaume before being moved to French Flanders, and it was during the advance in Flanders that Benjamin was Killed in Action on 2 September 1918, aged 33. He is buried at Sailly-Saillisel British Cemetery, Somme, in Grave II. J. 9. 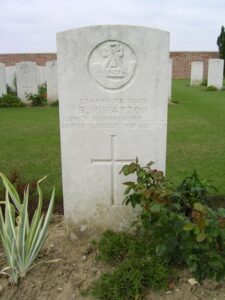 George Williams, Private, 430860, Canadian Infantry. George was born in Pembroke on 14 August 1883 the son of George and Mary Williams, of Newton Crossing, Manorbier. He served in the Royal Navy for several years, then emigrated to Canada, where he worked as a labourer, and enlisted into the Canadian Infantry at Victoria, British Columbia, on the 31st March, 1915. He was posted into the 28th Battalion Canadian Infantry (Saskatchewan Regiment), which formed part of the 6th Brigade, 2nd Canadian Division. The Division formed in Britain, and embarked for France in September 1915, spending a long, cold winter at Ploegsteert Wood and St. Eloi, south of Ypres. The Battle of Mount Sorrel began on 2 June 1916 and it was here that George was Killed in Action, on 6 June 1916, aged 32. George is remembered on the Ypres (Menin Gate) Memorial, on Panel 18 – 26 – 28. 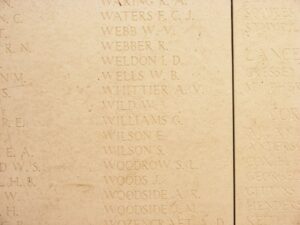 William Williams, Private, 8195, Welsh Regiment. William was born at Carew in 1884, the son of William and Elizabeth Williams. He married Charlotte in 1908, and the couple resided at Jameston, Manorbier. William enlisted and served in the 3rd Battalion, the Welsh Regiment. The Battalion was a Reserve Battalion that stayed in the U.K. throughout the War, but William must have served in France with another Battalion of the Welsh Regiment, as although he survived the war, he sadly died of wounds at home on 14 September 1920, aged 36. He is buried in Manorbier (St. James) Churchyard. Charlotte later remarried, to William H Glanville, and lived at 1, Bridge Street, Tenby. 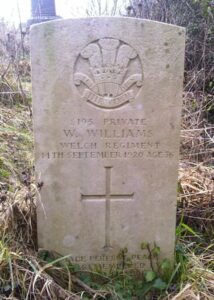