Hubberston is a coastal village which is situated to the west of the larger town of Milford Haven, adjacent to Hakin, and is separated from Milford by Hubberston Pill. The village formed around the 13th century church, which is dedicated to St. David, and stands next to Hubberston green. Fort Hubberston is a large coastal defence battery located in the village, which was abandoned after the Great War. The men of the village who fell during the Great War are commemorated on a War Memorial which is located within the village hall. Many thanks to David Phillips for the photograph of the memorial. 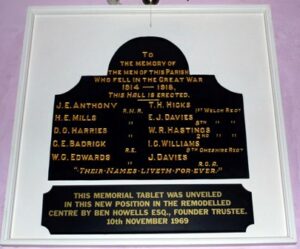 John Edwin Anthony, Trimmer, 546TS, Royal Naval Reserve. John was born on 24 November 1890, the Son of John and Elizabeth Anthony, of Hubberston, Milford Haven. He married Beatrice Maud Battensby in 1913, and the couple resided at Hubberston Green. He served as Trimmer aboard HM Trawler Drumtochty, which was used to patrol the English Channel. John was killed on active service on 5 March 1916, aged 28, and is buried at Dunkirk Town Cemetery. Drumtochty sank later in the war when she struck a mine in the Channel on 29 January 1918, with the loss of eleven of her crew of thirteen. 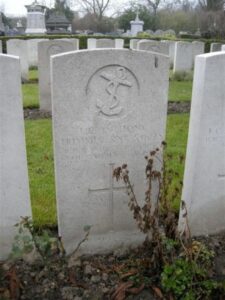 Charles Ernest Badrick, Sergeant, 50140, Royal Engineers. Charles was born in 1882, the son of Joseph and Rebecca Badrick, of 7, Green Terrace, Hubberston, Milford Haven. He enlisted at Milford into the Royal Engineers, and was posted to their 98th Field Company, which was on the Western Front, attached to the 21st Division. The Division crossed to France between 2 and 13 September 1915, and its first experience of battle was truly appalling. Having been in France for only a few days, lengthy forced marches brought it into the reserve for the British assault at Loos. GHQ planning left it too far behind to be a useful reinforcement on the first day, but it was sent into action on 26 September, whereupon it suffered over 3,800 casualties for very little gain. The Division remained in the area north of Loos over the coming winter, and it was here that Charles was killed in action on 1 December 1915, aged 33. Charles is buried at Chappelle-D’Armentieres New Military Cemetery, France. 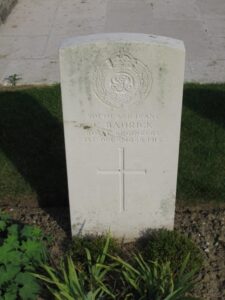 Edward James Davies, Private, 38356, Welsh Regiment. Edward was the son of George and Caroline Davies, of Hubberston. He enlisted at Milford into the Army, joining the 8th Battalion, Welsh Regiment. The battalion formed part of 40 Brigade, 13th (Western) Division, and between 6 and 16 July 1915 landed on Cape Helles and relieved the 29th Division. They left and returned to Mudros at the end of the month, and the entire Division landed at ANZAC Cove between 3 and 5 August, 1915, taking part in the Battles of Sari Bair, Russell’s Top, and Hill 60, ANZAC. Soon afterwards the Division was transferred from ANZAC to Suvla Bay, and it was evacuated from Suvla on 19 December 1915, whereupon the infantry moved after a week’s rest to the Helles bridgehead, where they faced the last Turkish attacks at Helles. On 8 January 1916, the Division was evacuated from Helles, and by 31 January was concentrated at Port Said, where they held forward posts in the Suez Canal defences. On 12 February, 1916 the Division began to move to Mesopotamia, to strengthen the force being assembled for the relief of the besieged garrison at Kut al Amara. Edward was killed during the opening of the move into Mesopotamia on 9 February 1917, aged 19. He is buried at Amara War Cemetery, Mesopotamia.

James Davies, Gunner, 141181, Royal Garrison Artillery. James was the Son of Tom and Elizabeth Davies, of Haven Head, Hubberston. He enlisted at Milford into the Royal Garrison Artillery, and was posted to its 230th Siege Battery. The Battery formed on 12 August 1916, and moved to France soon after, taking up positions near Bellewaarde, outside Ypres the following summer. James was killed in action at Ypres on 5 September 1917. He was 32 years old, and is buried at Ypres Town Cemetery Extension, Belgium. 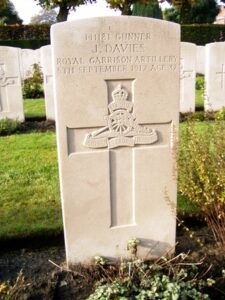 William George Edwards, Sapper, 15442, Royal Engineers. William was the son of Thomas and Hannah Edwards, of Court House, Hubberston. He worked at HM Dockyard prior to the war, and enlisted at Pennar into the Royal Engineers. After receiving his training, he was posted to the 11th Field Company, Royal Engineers, which was attached to the 2nd Division. One of the first Divisions to move to France, the 2nd Division remained on the Western Front throughout the war. They moved to Belgium, where they fought at the Battle of Mons, and retreating southwards, fought at the Affair of Landrecies, the Rearguard Actions of Villers-Cotterets, and at the Battle of the Marne where the German offensive was stopped. The Germans retreated north, and the BEF met them, fighting at the Battle of the Aisne. The 2nd Division were then moved to Flanders, where they fought at the First Battle of Ypres, when the German sweep through Flanders was stopped, and remained there throughout the first winter of the war. William died in Flanders on 11 January 1915, aged 28. He is buried at Le Touret Military Cemetery, Richebourg-L’Avoue, France. 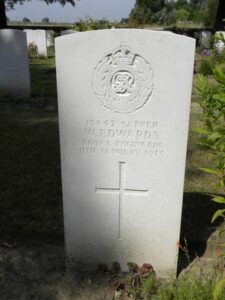 David Owen Harris, Engineman, 1408ES, Royal Navy. David was born on 9 July 1878, the son of John and Magdalen Harris of Carmarthen. He had enlisted into the Royal Navy at a young age, and by 1911 was living with his wife Florence E. Harris, at 53, Waterloo Road, Hakin. David served aboard HM Trawler Blackthorne, which was a hired net drifter. David was accidentally drowned on 21 February 1918. He was 39 years old, and is commemorated on the Plymouth Naval Memorial, Devon.

William Ronald Hastings, Private, 78599, Welsh Regiment. William was the son of Robert and Annie Hastings, of 13, Chapel Street, Milford Haven. William worked as a Butcher’s Assistant prior to enlisting into the Welsh Regiment on 24 June 1918, and was posted to the 52nd Training Reserve Battalion at Kinmel Park. Within months he became ill, and was invalided to Norfolk War Hospital in Norwich where he was found to be suffering from tuberculosis, and he was discharged from the army as medically unfit on 7 November 1918. William died of tuberculosis at Hubberston on 16 March 1919, aged just 18, and is buried in Milford Haven Cemetery. William’s case was passed onto the CWGC on 5 August 2012. He was initially rejected through lack of evidence on 21 July 2014, but has today, Tuesday 22 October 1914 been accepted for commemoration after further evidence was uncovered. He was temporarily commemorated in the United Kingdom Book of Remembrance, pending confirmation of his burial at Milford, and has recently had a new CWGC Portland headstone erected on what was originally the bare plot of ground below. 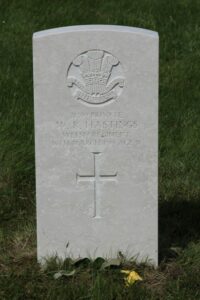 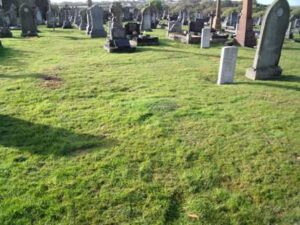 Theophilus Henry Hicks, Corporal, 30959, Welsh Regiment. Theo was the son of Thomas and Louisa Hicks, of Church Road, Hubberston, Milford Haven. He enlisted at Haverfordwest into the 1st Battalion, Welsh Regiment. The battalion was in India at the outbreak of war, and were quickly recalled to Britain, where it joined 84 Brigade, 28th Division. The Division formed in England between December 1914 and January 1915 from regular units returning from India, Singapore and Egypt. During January 1915 it moved to France, landing at Le Havre and moved to the Western Front, where it saw its first major action during the Second Battle of Ypres. Following serious casualties at Ypres, a Composite Brigade was formed, composing of the 2nd Battalion, the Buffs, 2nd Battalion, the Cheshires, 1st Battalion, the Welsh, and 1st Battalion, the York and Lancaster. It was dissolved on 19 May 1915, and the formation assumed its normal configuration, taking part in the Battle of Loos. During October 1915, the Division embarked at Marseilles, and proceeded to Egypt, and in November moved on to Salonika where the Division then remained. Theo must have died of wounds during the journey to Marseilles on 11 October 1915, as he is buried at Les Gonards Cemetery, Versailles, France. He was 25 years old.

Hubert Ernest Mills, Engineman, 2504ES, Royal Naval Reserve. Hubert was born on 25 August 1877, the son of William and Jane Mills, of Hubberston. He lived prior to the war with his wife, Mary Mills, at Broadway, Little Haven. Hubert was a Royal Naval Reservist, and served during the Great War aboard HM Trawler Fulmar. Fulmar was a Grimsby-registered 231 ton vessel, which had been built in 1899 and hired in May 1915 by the Admiralty. She was sunk by a mine on 17 Jan 1916 in the Gulf of Sollum, with the loss of all hands. Hubert was 38 years old, and is commemorated on Panel 19 of the Plymouth Naval Memorial, Devon.

Ivor Carlyle Williams, Private, 66193, Cheshire Regiment. Ivor was born at Hubberston in 1899, the son of John and Eleanor Williams. The family later resided at 11, William’s Street, Pontardulais prior to the war, and Ivor worked in a Tinplate Works. He enlisted at Ammanford on 12 June 1915 into the 15th Battalion, Welsh Regiment, which was known as the Carmarthen Pals Battalion. He was discharged on 5 October 1915 due to being under-age. Ivor re-enlisted at Swansea in February 1917, and was posted to the 9th Battalion, Cheshire Regiment, attached to 56 Brigade, 19th (Western) Division. Ivor joined the battalion in France on 24 January 1918. In the Spring of 1918 the division was caught up in the German Spring Offensive on the Somme, and was decimated, before being moved to positions near Ploegsteert to rest and rebuild. Fatally, they were hit again, by a fresh offensive in April, and during the desperate fighting that followed in the Battle of Kemmel, Ivor was fatally wounded in the thigh and arms by gunshot. He died of his wounds, aged just 19, on 29 April 1918, and is buried at Esquelbecq Military Cemetery, France. 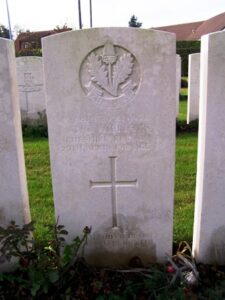