Hook is a village on the Western Cleddau, Pembrokeshire, which was part of the community of Llangwm. Hook was a thriving port, used mainly for the export of locally hewn coal, but this industry has long since died out. The men from Hook who fell during both World Wars are commemorated on the village War Memorial, which is outside the memorial hall. Many thanks to Graham Johnson for his photos of the Hook War Memorial. (Please note that this page of the website is the original source for work copied and printed in Pembrokeshire Life Magazine in 2013.) 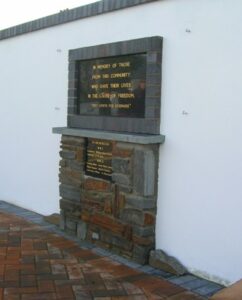 William Henry Hitchings, Private, 203690, East Yorkshire Regiment. William was the son of Frederick and Sarah Hitchings, of Sprinkle Hill, Hook. He enlisted at Cardiff into the Army, and was posted to the 1/4th Battalion, East Yorkshire Regiment, which was attached to 150 Brigade, 50th (Northumbrian) Division. It moved to France 16 April 1915, and served with distinction on the Western Front throughout the war. The Division moved to Ypres, where they took part in the Second Battle of Ypres from April to June 1915. During the summer of 1916 the Division were on the Somme, where they fought at the Battle of Flers-Courcelette, the Battle of Morval and the Battle of Le Transloy. After spending a winter on the Somme, they moved north to Arras, where they took part in the Arras Offensive of April 1917, and fought at the First Battle of the Scarpe, capturing the Wancourt Ridge. William was killed at Arras on 23 April 1917, aged 21, and is commemorated on the Arras Memorial, France. 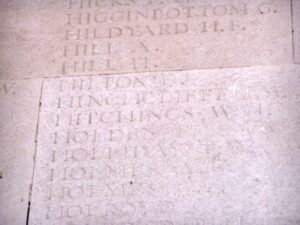 Gwilym Rhys Jones, Lieutenant, Royal Welsh Fusiliers. Gwilym was born in 1890, the son of William and Catherine Jones, of Penderyn, Brecon. He was educated in London, and must have worked at Hook prior to the war. Gwilym originally enlisted into the Welsh Regiment, and was commissioned from the Welsh Regiment into the 6th Battalion, Royal Welsh Fusiliers on 19 March 1915. The battalion was attached to 158 Brigade, 53rd (Welsh) Division, and on 19 July 1915 sailed from Devonport for Imbros, before landing at C Beach, Suvla Bay, Gallipoli on 9 August 1915. 158 Brigade left the beach on the morning of 10 August 1915, and headed over the Salt Lake towards the Turkish positions at Scimitar Hill. The attack was muddled, and many men were caught in the open by shellfire and bullets. Gwilym was killed in action during this initial advance on 10 August 1915, aged 25. He has no known grave, and is commemorated on the Helles Memorial, Gallipoli. 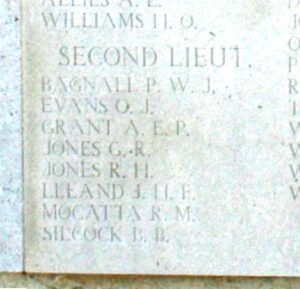 Alfred Owen James, Petty Officer Stoker, D/K 65276, Royal Navy. Alfred was born at Roose Lodge, Burton on 28 May 1904, the son of Alfred and Sarah Ann James. He served with the Royal Navy, as a Petty Officer Stoker aboard the Destroyer HMS Diamond. The ship spent most of her career on the China Station, then was assigned to the Mediterranean Fleet in 1939 before being transferred to West Africa for convoy escort duties. Diamond returned to the Mediterranean in early 1940, where she carried out escort duties with convoys to and from Malta. Alfred was killed when HMS Diamond was sunk by German aircraft on 27 April 1941 whilst evacuating Allied troops from Greece. He was 36 years old, and is commemorated on the Plymouth Naval Memorial, Devon.

James Henry James, Stoker 1st Class, D/KX 89604, Royal Navy. James was the Son of Joseph Talmace James and Olive James, of Llangwm. He served with the Royal Navy, as a Stoker aboard the aircraft carrier HMS Glorious. She had originally served as a cruiser during the First World War, and during the 1920’s was converted to an aircraft carrier. At the start of the Second World War, Glorious took part in the hunt for the Graf Spee in the Indian Ocean before returning to the Mediterranean, and was recalled in April 1940 to support British operations in Norway. While evacuating British aircraft from Norway on 8 June 1941, Glorious was sunk by the German battleships Scharnhorst and Gneisenau with the loss of over 1,200 lives. James was among the men lost that day. He was 21 years old, and is commemorated on the Plymouth Naval Memorial, Devon.

Wilfred Martin Thomas, Flight Sergeant (Pilot), 1336180, Royal Air Force Volunteer Reserve. Wilfred was the son of William and Mary Jane Thomas, of Hook. He enlisted into the Royal Air Force Volunteer Reserve at the outbreak of war, and trained as a Pilot. Wilfred was posted to 226 Squadron, which was equipped with the Mitchell Mark II bomber. On 25 November 1943, Wilfred was piloting Mitchell II, Serial FL196 J during a raid on a section of the Atlantic Wall at Audinghen, near Calais, France, when it was hit by flak. He managed to get the stricken aircraft back over the channel, but it crashed near Dover, killing Wilfred and the three other crewmen. Wilfred was 23 years old, and is buried at Hook Gospel Mission Burial Ground. 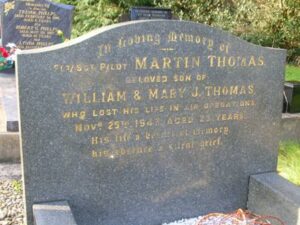