Herbrandston has no village war memorial, and is classified as a doubly thankful village, as none of the young men of the village who went to either of the world wars were killed. However, if you dig a little deeper, then four men can be found who had ties to the village and died during the Great War of 1914-1918. Does the brevity of the residence of two of these men compromise the status of Herbrandston as a Thankful Village, or is it just thankful because no war memorial was erected?

Alfred Ernest Gordon, Major, Royal Garrison Artillery. Alfred was born in Bengal on 25 November 1871, the son of Hamilton and Ada Gordon. He became a Cadet at Woolwich before being commissioned into the Royal Garrison Artillery on 24 July 1891. Alfred had served in Bermuda before returning to England, marrying May Isabella Dean on 13 February 1897, before becoming Adjutant of the Lancashire Royal Garrison Artillery. By 1911 the family had moved to Caernavon, where Alfred gave his occupation as retired Major. When the Great War broke out he returned to duty, and was posted to Pembrokeshire. He died of heart failure at South Hook Fort on 19 December 1916, aged 45, and is buried in Herbrandston (St. Mary) Churchyard. 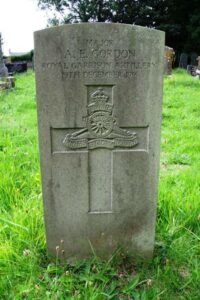 George Benjamin John, Private, G/7117, Queens Own Royal West Kent Regiment. George was born at Herbrandston in 1894, the son of Charles and Martha John. He originally enlisted at Haverfordwest into the 16th Lancers, but was transferred at some time into the 1st Battalion, Royal West Kent Regiment. The battalion was in France attached to 13 Brigade, 5th Division. The Division had landed at Havre on 15 August, 1914, and fought at the Battle of Mons, and during the retreat south, fighting at Le Cateau, then down to the Marne where the German attack was halted. They took part in the advance to the Aisne, before moving to Flanders, where they fought at the Battle of La Bassée, then at Messines in October, 1914. They fought here through First Ypres, and took part in the capture of Hill 60, and then fought at Second Ypres in April 1915. March 1916 saw the Division moving to positions between St. Laurent-Blangy and Vimy, near Arras, and the Division saw plenty of action during its spell here. On 1 July 1916 the Battle of the Somme opened, and the Division moved south fighting at High Wood, then at Guillemont, and Flers-Courcelette. George was wounded at Flers, and evacuated to the Casualty Clearing Station at Corbie, in the Somme Valley. He died of his wounds there on 15 September 1916, aged 22, and is buried at La Neuville British Cemetery, Corbie, France. 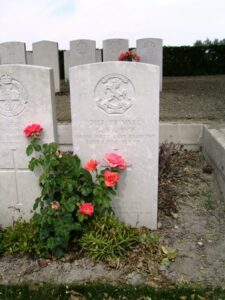 Thomas Kinsey, Private, 2920, Army Cyclist Corps. Thomas was born at Herbrandston in 1892, the son of Jonathan and Emily Kinsey. His father had been stationed nearby with the Royal Marine Light Infantry. The family had moved to 12, Gron Road, Gwaun-cae-Gurwen prior to 1901. Thomas enlisted at Ammanford on 9 September 1914 into the 9th Battalion, Royal Welsh Fusiliers. On 30 December he was posted to the XVII Corps Cyclist Battalion, and landed in France on 26 September 1915. Thomas was killed in action during the Second Battle of Bapaume on 4 September 1918. He has no known grave, and is commemorated on the Vis-En-Artois Memorial, France. 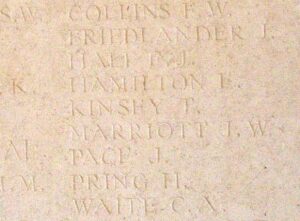 John Rees, Private, T4/172364, Royal Army Service Corps. John was born in Herbrandston in 1881, the son of James and Ann Rees, of The Cottage, Clay Bridge. He lived with his wife Lily Maud Rees at Hubberston prior to the war, where he worked as an insurance agent. He enlisted into the Army Service Corps on 11 December 1915 and served until 12 February 1917, when he was discharged as physically unfit, following his being diagnosed as having contracted tuberculosis. John returned to Pembrokeshire where he died of tuberculosis on 7 July 1923, aged 42. Despite his illness and subsequent death being directly linked to his service, John died after the cut-off date for commemoration by the CWGC.

Also buried in Herbrandston Churchyard is an army officer who met an untimely fate. Lieutenant Philip Carrol Walker was based at Fort Hubberston, when he was allegedly murdered by Surgeon Major Sidney Alder on 28 May 1875. Alder was tried and found not guilty of the murder of the 26 year old Walker, but local legend has it that the mysterious shape of a hand clutching a dagger appeared on the headstone at some time after the funeral, and at various times of the year the form re-appears. 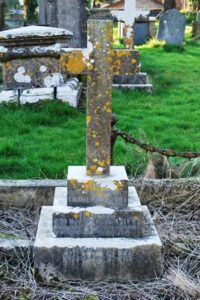 All together at least four men with ties to Herbrandston are known to have died during the Great War, three of whom were actually born in the Parish.

Was Herbrandston a ‘Thankful Village’ just because it does not have a war memorial, or is it simply a village lacking a war memorial which it should have?