The small parish of Haroldston West is situated just over five miles west of Haverfordwest, and a mile north of Broadhaven, on the Pembrokeshire coast overlooking St. Bride’s Bay. The parish Church is dedicated to St. Madoc of Ferns, and houses a fine leaded glass window, which is dedicated to the two men of the parish who fell during the Great War. In addition to this, there is a war grave to an unknown sailor, who was buried in the churchyard on 17 August 1941, a memorial stone to a soldier who died in 1851 and another man from Haroldston who had moved to Haverfordwest to live with his aunt. 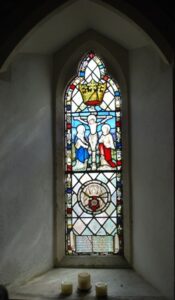 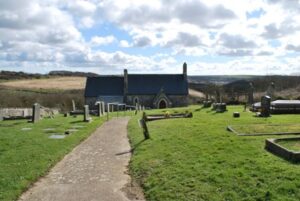 George Winfred Bowen, Private, 201578, Welsh Regiment. George (known as Fred) was born at Haroldston, and was the illegitimate son of either Sarah or Hannah Bowen. He lived with his aunt, Mary Louisa Summons (nee Bowen), of 84, Portfield, Haverfordwest. He enlisted at Haverfordwest into the 4th Welsh, and was posted to the 15th Battalion, Welsh Regiment (Carmarthen Pals), which was attached to 114 Brigade, 38th (Welsh) Division. The Division had landed in France during December 1915 and had spent their first winter in the trenches near Armentieres. In June they marched south to the Somme, where they were tasked with the capture of Mametz Wood. The attack on the wood began on 7 July, but met with fierce resistance, and it took until 12 July to clear the wood. The Division suffered terrible casualties at Mametz, and were taken out of the line, and moved to Ypres to rebuild. Here they fought at the Battle of Pilckem Ridge and at the Battle of Langemarck. Fred was wounded at Langemarck, and evacuated to a nearby Casualty Clearing Station, where he died of his wounds on 20 August 1917, aged 23. He is buried at Dozinghem Military Cemetery, Belgium. 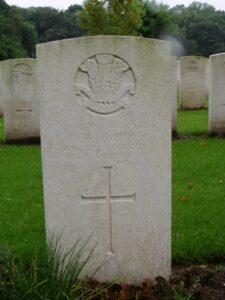 John Codd, Private, 46477, Welsh Regiment. John was born at St. Ishmaels in 1889, the son of Thomas and Sarah Ann Codd, of Hayguard Bay. He had married in 1909, and lived with his wife Hannah, and daughters Phyllis and Iris at Hayguard Bay prior to the war. John enlisted at Haverfordwest into the Army, and was posted to the 9th Battalion, Welsh Regiment, which was attached to 58 Brigade, 19th (Western) Division. The Division assembled around Bulford during September 1914, and had crossed to France during July 1915, moving to positions near Loos. The Division fought during the opening attack of the Battle of Loos, and then moved to the Somme, where it took part in the second wave of the attack on Ovillers-La Boiselle on 1 July 1916, capturing the village at heavy cost. It then fought through the Somme Battles of Pozières and the Ancre in 1916. The Division moved north to Ypres in 1917, and took part in the Battle of Messines. John was killed in action at Messines on 7 June 1917, aged 27. John has no known grave, and is commemorated on the Ypres (Menin Gate) Memorial, Belgium. 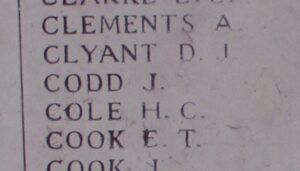 Walter James Griffiths, Private, 73207, Royal Welsh Fusiliers. Walter was the son of Joseph and Frances Griffiths, of Haroldston Hill, Broad Haven. He enlisted at Carmarthen into the Army, and was posted to France at sometime in 1917, joining the 2nd Battalion, Royal Welsh Fusiliers, which was by then attached to the 33rd Division. Walter possibly saw action at Arras, at the Battle of the Scarpe and at Bullecourt, before the division headed to Ypres. Here it saw heavy fighting on the Menin Road and at Polygon Wood. Walter was killed in action during Third Ypres, on 26 November 1917, aged 19. He has no known grave, and so is commemorated on the Tyne Cot Memorial, near Ypres. 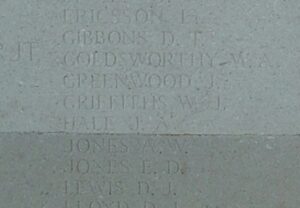 In the Churchyard is the grave of an unknown Merchant Sailor, with the date 17 August 1941. This is probably the date he was buried (or recovered from the sea), and not his actual date of death. 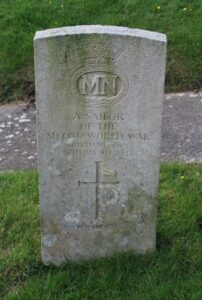 Alfred Mathias. Alfred was the son of William and Catherine Mathias, of Mill Cottage, Haroldston, Pembrokeshire. He enlisted into the army, and was living at Hyde Park Barracks when he died on 12 March 1853, aged 21. He was buried in Kensington on 17 March, but his parents erected a slate memorial headstone to him in Haroldstone Churchyard. The photograph is courtesy of Dai Phillips. 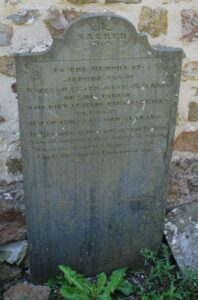