Granston and St Nicholas are two small villages, situated about four miles southwest of Fishguard. The Memorial at St. Nicholas (also known as Tremarchog) contains no names, except the inscription in English and Welsh ‘In Memory Of The Men From The Parishes Of Granston And St. Nicholas Who In The Great War 1914-1918 Fell In The Cause Of Freedom’. The men seem to be commemorated on the memorial gates at Llangloffan Cemetery which is nearby. There is also an individual memorial plaque inside St. Catherine’s Church, which commemorates Gilbert Burrington. In the churchyard is a war grave to an unknown sailor. 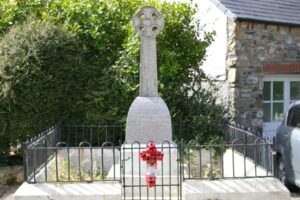 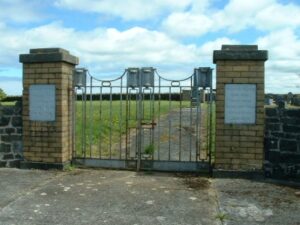 Gilbert Burrington, MM, Private, 703727, Canadian Infantry. Gilbert was born at Bridgwater, Somerset on 13 June 1879, the son of Gilbert and Amelia Burrington. He was educated at Gloucester, and had played first class cricket for Somerset before moving to Granston, and married Marianne Emily Harries, of Tregwynt Manor, on 27 December 1913. Gilbert then emigrated to Canada, where he worked for the British Colombian Government. Gilbert enlisted into the Canadian Infantry on 16 February 1916, taking nine years off his age. By July 1916 Gilbert was in France, joining the 102nd Battalion (Central Ontario), which was attached to 11 Brigade, 4th Canadian Division. The division moved to the Somme to take part in the attacks on Mouquet Farm, Regina Trench and Courcelette. On 21 November 1916 the 102nd Battalion was consolidating trenches at Regina Trench, when Gilbert was killed by a German shell. He was 37 years old, and is commemorated on the Vimy Memorial, France. His brother Harley was also killed in France. 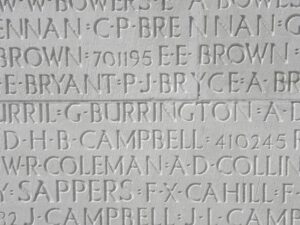 Henry Davies, Private, 29613, South Wales Borderers. Henry was born at Castle Morris, the son of James and Anne Davies. He enlisted at Carmarthen into the army, and was initially posted to the 11th Battalion, South Wales Borderers, which was attached to the 38th (Welsh) Division. Henry served with the battalion, which took part in the assault on Mametz Wood in 1916 and the Battle of Pilckem Ridge in 1917, until it was disbanded early in 1918, and was briefly attached to the 2nd Entrenching Battalion before being posted to the 5th Battalion, South Wales Borderers. The battalion was attached to 58 Brigade, 19th (Western) Division, and was in the Somme area, forwards of Bapaume, during the spring of 1918 when it was hit by the German Spring Offensive of 21 March 1918. After suffering heavy casualties, the battered division moved back to the Messines sector to rebuild. It was hit there again during the German second offensive on 9 April 1918. The division suffered awful casualties there, and the remnants were moved to the Aisne sector to rebuild and rest, but were unfortunately caught up in the Germans last ditch third major offensive of 1918, during the Battle of the Aisne in May. Following large drafts of reinforcements during the summer of 1918 the division took part in the great 100 days offensive which ultimately won the war. By the beginning of November 1918, the 19th Division was advancing northeast of Cambrai, around the village of Rieux, and the 5th SWB moved into the village of Jenlain. The men were ordered to bridge the Petit Aunelle River. One man was killed and three were wounded during the work to cross the river that day. Henry was one of the three wounded men, and died of his wounds later that day, on 4 November 1918, aged 21. He is buried at Canonne Farm British Cemetery-Sommaing, France. His brother, George Mathias Davies, won the Military Medal while serving with the Royal Garrison Artillery, and survived the war, dying on 7 August 1964. 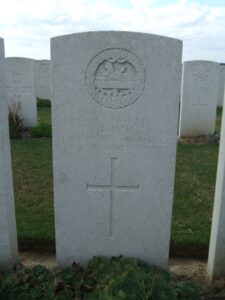 Thomas Henry Davies, Private, 60663, Welsh Regiment. Thomas was born at Jordanston Hill, and enlisted at Cardiff into the Welsh Regiment. He was posted to Egypt, where he joined the 24th Battalion, Welsh Regiment. The battalion had been formed in 1917 by the merging of the Pembroke and Glamorgan Yeomanry, and was attached to the 231 Brigade, 74th (Yeomanry) Division. The Division had formed in Egypt in January 1917 and had fought through the Palestinian Campaign, at the Battles of Gaza and the Battle and capture of Jerusalem. Thomas was killed in action during the Third Battle of Gaza, on 27 December 1917. He is commemorated on the Jerusalem Memorial, Israel. 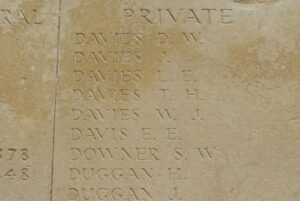 John John, Private, 54504, Welsh Regiment. John was the son of Mrs. Ann John, of St. Nicholas, Fishguard. He served in the 14th Battalion, Welsh Regiment, which was attached to 114 Brigade, 38th (Welsh) Division. John arrived in France after the capture of Mametz Wood in July 1916. He probably took part in the Battle of Pilckem Ridge on 31 July 1917. The Division wintered around Armentieres, and in April 1918 moved to positions north of Albert on the Somme, where they remained until launching their assault across the River Ancre on 21 August 1918. Over the coming weeks the Division drove the Germans back towards the Hindenburg Line, and after the line was broken, advanced past Le Cateau, to the Forest of Mormal. After the Armistice was signed, John was attached to 114 Headquarters staff. He took ill with broncho-pneumonia, and was brought to the 21st Casualty Clearing Station at Caudry, where he died on 7 December 1918. John is buried in Caudry Military Cemetery, France. 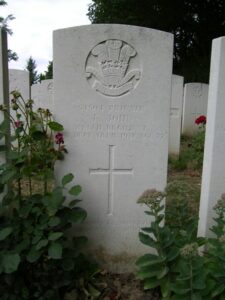 George Roach, Private, 25084, Welsh Regiment. George was born at Llangloffan in 1897, the son of John and Esther Roach. He enlisted at Bridgend into the Welsh Regiment, and was posted to the 15th Battalion, Welsh Regiment, known as the Carmarthen Pals battalion, which was attached to 114 Brigade, 38th (Welsh) Division. George probably joined the battalion in France after the fighting at Mametz Wood in July 1916. The Division moved to positions at Boesinghe, where it held the trenches along the Canal Bank over the coming months. On 31 July 1917 the Division launched its attack on Pilckem Ridge, and captured all its objectives, before withdrawing to rest. The 15th Welsh remained in the line and took part in the Battle of Langemarck, before the entire Division was moved to the Armentieres area. George was killed at Armentieres on 11 March 1918, aged 20, after the Germans raided the 15th Welsh lines at Houplines. George was buried at Cite Bonjean Military Cemetery, Armentieres, France. 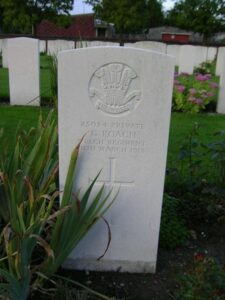 Thomas Evan Roach, Private, 94283, Royal Welsh Fusiliers. Thomas was born at St. Clears, but worked and resided at St. Nicholas in later life. His mother, Emily, lived at Ramsay Island. He enlisted at Carmarthen into the Monmouth Regiment, and later transferred into the 17th Battalion, Royal Welsh Fusiliers, part of 115 Brigade, 38th (Welsh) Division. The Division arrived in France during December 1915 and fought at Armentieres before moving to the Somme, where they were decimated at Mametz Wood. After nearly a year rebuilding, they fought well at Passchendaele, and also played an important role in the battles of 1918, first during the desperate months of Spring 1918, trying to hold the aggressive German advance, and then later on in the great advance to the Hindenburg Line. Thomas was killed in Action on 29 October 1918, during the Battle of the Selle, and is buried at Englefontaine British Cemetery, France. 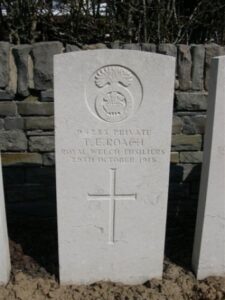 William David Williams, Private, 36949, Welsh Regiment. William was the son of Thomas and Maria Williams, of Llangloffan Cross. He enlisted at Ferndale into the South Wales Borderers, but was transferred into the 2nd Battalion, Welsh Regiment, which was attached to 3 Brigade, 1st Division. The Division had been one of the first to arrive in France, fighting at the retreat from Mons to the Marne, where the Germans were stopped. They then fought at the Aisne, and at Chivy, before being moved north to Ypres. Here they fought at the First Battle of Ypres, where they again stopped the German Offensive, before wintering in Flanders. The following year saw them in action again at the Battle of Aubers, before moving South to Loos, where they fought during the Battle of Loos, and the action at the Hohenzollern redoubt. Again they were required for a major offensive, moving south to the Somme, where they fought during the opening of the Somme Offensive at the Battle of Albert. William was wounded on the Somme, and died on 12 September 1916. He is buried at Millencourt Communal Cemetery Extension, France. 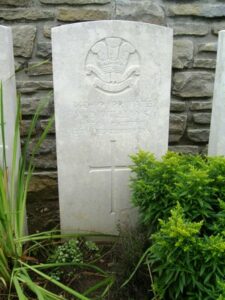 As well as the local men commemorated on the war memorial at Llangloffan, in Granston Churchyard lies the body of an unknown man which was found washed up at Abermawr on 19 January 1916. This man was most likely a casualty from a ship sunk off the Pembrokeshire coast, but we shall probably never know. 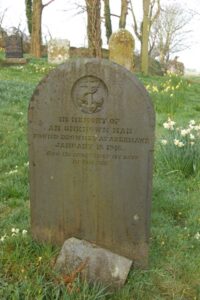