On the headland overlooking Freshwater West Bay in Pembrokeshire stands a remote war memorial, which was erected after the Great War to commemorate the soldiers and sailors of the area who gave their lives. The memorial, in the form of a cross, was designed by the Architect John Coates Carter, who had designed several war memorials in west Wales. 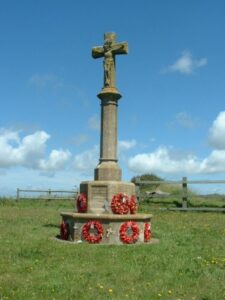 There are no names on the memorial, but it has inscriptions on three of its panels and its base is designed as a seat, on which one can sit and ponder whilst looking out over Freshwater Bay.

WE GIVE THEE THANKS

O LORD FOR THE MEMORY OF

WHO GAVE THEIR LIVES

FOR THEIR KING AND

THAT A MAN LAY

MAY THEY REST IN PEACE

Freshwater Bay was to see many tragedies during both wars, many involving torpedoed ships, but most notably during two terrible days in April 1943, when two Landing Craft and a rescue ship sank in the bay during a severe gale.

A separate memorial overlooking the bay commemorates the many lives lost in the disaster, and reads:

“THIS MEMORIAL COMMEMORATES LANDING CRAFT GUN (LARGE) NUMBERS 15 AND 16, WHICH FOUNDERED ON THEIR MAIDEN VOYAGE, OFF NEARBY SHORES, IN HEAVY SEAS ON APRIL 25TH (LCG 15) AND 26TH APRIL (LCG 16) 1943. 73 OFFICERS, RATINGS AND OTHER RANKS PERISHED. FOLLOWING THIS DISASTER, MODIFICATION TO LATER CRAFT PREVENTED THE HEAVY LOSS OF LIFE IN A LARGE CONVOY OF SIMILAR CRAFT WHICH ENCOUNTERED SOME OF THE WORST WEATHER OF WORLD WAR II ON PASSING TO MEDITERRANEAN THEATRE OF OPERATIONS. ALSO COMMEMORATED ARE SIX RATINGS FROM H.M.S. ROSEMARY, WHO GAVE THEIR LIVES MAKING A RESCUE ATTEMPT WHEN LCG (L) 15 SANK. THIS MEMORIAL WAS PRESENTED BY THE LCG AND F ASSOCIATION, TO MARK THE 50TH ANNIVERSARY OF THE DISASTER.”

Details of the memorial can be found on this website, on the Freshwater West LCG Memorial page. There is also a memorial in Milford Haven Cemetery, where many of the men are buried, which commemorates the men and lists them all by name. 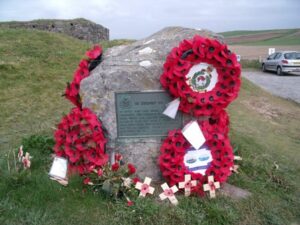 Freshwater Bay was to be one the location of one the earliest casualties of the Great War. The 4th Battalion, Welsh Regiment was the local Territorial infantry unit and, soon after the outbreak of war, was posted to Pembrokeshire to garrison some of the forts around the coast.

On Sunday 30 August 1914 a large group of around 180 men of the 4th Welsh marched down to the golden sands of Freshwater Bay, after having been taken there on bathing duties by two local officers, Captain Hume Buckley Roderick and Lieutenant Henry William Davies Williams.

Two Companies of the 4th Welsh: the Haverfordwest and the Llanelly Companies, were bathing when Lieutenant Williams ordered the sounding of a bugle to recall the men to the shore. However, a rip tide had dragged a number of men out and soon Williams heard them calling for help. Lieutenant Williams, a strong swimmer, stripped his clothes off and swam out and rescued four men.

Corporals Bryn and Francis succeeded in rescuing Private William Cole; Sergeant William Daniels rescued Private Noel Stallard; while Captain Hume Buckley Roderick attempted to save Private John Lissamore, who had got into difficulties and was clinging to a rock.

Captain Roderick, who was bleeding from the head after being swept onto the rocks whilst attempting to save Lissamore, had to be rescued by Lieutenant Williams. Roderick was so exhausted through his efforts that he fell unconscious and had to be brought to Angle Hospital.

Sadly, John Lissamore, of the Llanelli Company, lost his grip on the rocks and was drowned. Captain Hume Buckley Roderick was later killed during the war and is commemorated on the Burry Port War Memorial.

John Joseph Lissamore, Private, 4434, Welsh Regiment. John was born at Droitwich on 14 May 1892, the son of John Joseph and Jane Lissamore. By 1911 John had moved to Llanelli and worked there as a behinder at Llanelli Tinplate Works.

He had married Charlotte Ann Jones in Llanelli 1909, and the couple lived at 13, Amos Terrace, Llanelli. Charlotte gave birth to their daughter, Florence May, on 2 February 1910, and then to a son, John Joseph, on 8 October 1912.

John had enlisted at Llanelli into the 4th Battalion, Welsh Regiment prior to the war, and served with the Llanelli Company. He was an athletic man, and during the Company sports days, usually held at Stradey Park, he had done well in several races over varying distanced.

The 4th Welsh moved into Pembrokeshire following the outbreak of war, to take up garrison duties in the forts around the coast and the Llanelli Company and the Haverfordwest Company moved to positions near Angle.

Sadly, John drowned while 180 men of the 4th Welsh were on swimming parade at Freshwater West on 30 August 1914. John was 23 years old. His body was never found, so John is commemorated on the Hollybrook Memorial, Southampton. 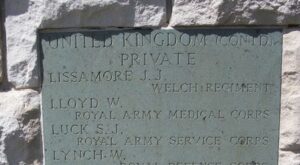