Cwm Gwaun is a small village situated on the northern edge of the Gwaun Valley, just over four miles east of Fishguard. The community proudly sticks to tradition and follows the pre-1752 Julian calendar and is predominantly Welsh speaking. Just to the north of the village lies Jabes Baptist Chapel which was erected in 1803 and restored a hundred years later, in 1903. Inside the Chapel are two marble war memorials, which commemorate two former members of the Chapel who fell during the Great War. The photograph of the Chapel is courtesy of Dai Phillips.

There are two other war memorials in the locality: Pontfaen (St. Brynach’s Church) Memorial; and Llanychaer (Glandwr Chapel) Memorial, which are on seperate pages on the website. 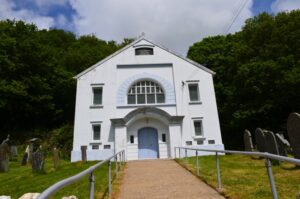 Thomas Evan James, DCM, Private, 27478, Welsh Regiment. Thomas was the son of David and Mary Ann James, of Penlanwynt, Pontfaen. He enlisted at Tonypandy into the army, and was posted to the 2nd Battalion, Welsh Regiment, which had been in France since the outbreak of war, attached to 3 Brigade, 1st Division. The Division fought in the rearguard actions from Mons, the Marne and the Aisne through to the First Battle of Ypres, where they stopped the German’s at Gheluvelt. They then fought at Aubers Ridge and Loos, and at several smaller battles throughout the Winter of 1915/16, where Thomas was to gain his Distinguished Conduct Medal ‘For conspicuous gallantry in volunteering to cut through the enemy’s wire within a few yards of his parapet, and carrying out his objective in spite of his patrol being seen and fired on. (London Gazette 15.3.16)’ The Division moved south to the Somme, where they fought in several of the minor Battles during the great offensive in 1916. Thomas was killed in action during the Battle of Bazentin, on 15 July 1916, aged 22, and is commemorated on the Thiepval Memorial, France. Thomas is commemorated on a memorial inside Jabes Chapel. 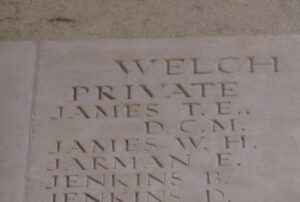 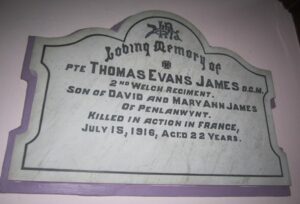 Edward Thomas Llewellyn, Lieutenant, Royal Welsh Fusiliers. Edward was the son of Thomas and Ruth Llewellyn, of Taibach, Cwm Gwaun. For several years prior to the war he had lived in 18, Porchester Gardens, Bayswater, Paddington, where he worked as a Draper. He enlisted in London into the 15th Battalion, Royal Welsh Fusiliers, which was attached to the 38th (Welsh) Division and was promoted to Sergeant before gaining a commission into the 4th (Garrison) Battalion, Royal Welsh Fusiliers on 16 April 1915. He was subsequently attached to the 9th Battalion, Royal Welsh Fusiliers, which was attached to 58 Brigade, 19th (Western) Division. The division took part in several major actions during the war, notably at the Somme in July 1916, Messines Ridge in June 1917 and at Passchendaele later that year. On 21 March 1918 was positioned near Bapaume when the Germans launched Operation Michael and over the coming days suffered terrible casualties. The battered division was transferred back to positions near Messines to recuperate but was hit again by a fresh offensive in April 1918 and after being virtually annihilated was transferred to a more peaceful sector on the Aisne, where it was unfortunately caught up in the Germans last offensive of the war. Edward had survived some terrible fighting but had been badly wounded at some time during the Battle of the Lys. He was evacuated to the base hospital at Étaples where he died of his wounds, on 18 May 1918, aged 32. He is buried in Étaples Military Cemetery, France. Edward is commemorated at Jabes Chapel, Cwm Gwaun and also on his parents’ headstone at Jabes Chapel. 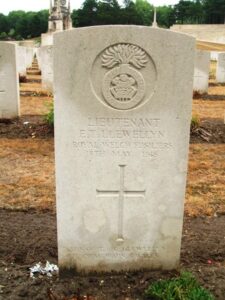 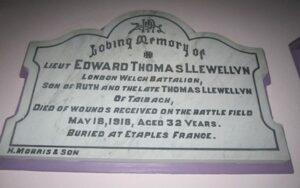