The town of Cilgerran is sat alongside the River Teifi, on the northern edge of Pembrokeshire, bordering Ceredigion to the north. It is the home of Cilgerran Castle, an impressively sited Norman stronghold, which was built around 1100AD. About a mile and a half south of the town lies the hamlet of Rhoshill, which is situated at the crossroads between the A478 road and the unclassified road from Cilgerran to Eglwyswrw. The Hamlet includes the Rhosygilwen estate, the former seat of the Colby family. On the road between Rhoshill and Cilgerran sits the nineteenth century Ty Rhos Welsh Independent Chapel. Within the Chapel is a white marble war memorial, which commemorated four members of the Chapel who fell during the Great War and one man who fell during World War Two. 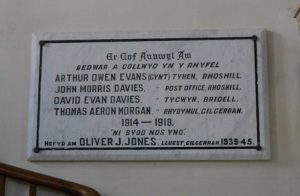 David Evan Davies, Private, 56738, Welsh Regiment. David was the son of David Davies and Margaret Davies (nee Morgans), of Tywyn, Bridell, Cardigan. He attended Rhoshill Council School. David married Elizabeth Blodwen Griffiths, a dairy maid, of Trebared Farm, Cardigan, prior to the war. David was working as a coalminer at Tirphil prior to enlisting into the 7th Battalion, Welsh Regiment on 6 October 1914. He was posted to the 2/7th (Reserve) Battalion, Welsh Regiment at Cardiff and when the battalion was posted to Holt, Norfolk in July 1916, David embarked for France, joining the 6th Infantry base Depot in France on 29 July. On the following day, David was posted to the 14th (Swansea) Battalion as a reinforcement on 5 August 1916, following the hammering the battalion had suffered at Mametz Wood just two weeks earlier. The Battalion was attached to 114 Brigade, 38th (Welsh) Division, and following its withdrawal from Mametz Wood had held the line at Hébuterne before being transferred to Northern France to undergo a training scheme. The Division moved to Belgium in August 1916, taking up positions north of Ypres, along the Yser Canal at Boesinghe. The 14th Welsh was soon put to work at Brandhoek, carrying out work digging trenches to lay communication and electric cables to the front line. On 6 September the 14th Welsh relieved the 16th Welsh in the front line, to begin its first routine tour in the Canal Bank trenches, before being relieved four days later, moving back into reserve. David was wounded during this spell in the reserve trenches when the Germans opened a terrific artillery bombardment upon them on 11 September. He was evacuated to the 129th Field Ambulance but died of his wounds on 13 September 1916. The 28-year-old is buried in Essex Farm Cemetery, Belgium. David is also commemorated on war memorials at Crymych and Cardigan. 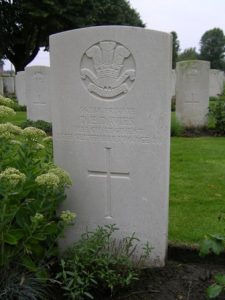 John Morris Davies, Sapper, 452460, Royal Engineers. John was born in 1878, the son of David Davies and Anne Davies (nee Jones), of Cilgerran. By 1902 he was residing at Monmouth, and during the Spring of that year married Maud Ella Blanche Williams. The couple set up home at 89, Monument Street, Monmouth and John worked in the town as a Post Office Clerk and Telegraphist. He enlisted into the Royal Engineers at Cardiff on 6 July 1915 and was posted to the 68th (2nd Welsh) Division Signals Company, Royal Engineers at Bedford. As a trained telegraphist, his skills were soon needed elsewhere, so on 28 September 1917 John embarked at Devonport aboard the SS Honorata and sailed for Durban, where he trans-shipped aboard the SS Caronia for Kilwa, in German East Africa (now Tanzania). On 13 November he was posted to the Imperial Signal Company. John served in East Africa for several weeks before contracting dysentery and was sent to the Hospital at Massassi, a town some 100 miles from the coast. He died in hospital there of dysentery on 3 January 1918, aged 40. John was originally buried in Massassi Cemetery, but after the war the war graves within the cemetery were exhumed and re-interred in Mtama Cemetery, Tanganyika before being moved again to Dar Es Salaam War Cemetery, Tanzania.

Arthur Owen Evans, Private, 6512, Australian Infantry. Arthur was born at Rhoshill in 1889, the son of John and Elizabeth Evans. He was educated at Bridell Council School. Arthur had emigrated to Australia aboard the SS Commonwealth in June 1911, and became a farmer at Spould’s Lagoon, Temora, New South Wales. On 10 July 1916 Arthur enlisted into the Australian Infantry at Victoria Barracks, Sydney and was posted to the 21st Reinforcements for the 13th Battalion, Australian Infantry. On 7 October 1916 Arthur embarked at Sydney with his unit aboard the SS Ceramic, bound for England, and disembarked on 21 November at Plymouth. After a period of training at Salisbury Plain, Arthur embarked at Folkestone on 8 February 1917, and on arrival in France joined the 13th Battalion, Australian Infantry, which was attached to the 4th Australian Brigade, 4th Australian Division. The Division was still on the Somme when Arthur arrived and followed the German withdrawal to the Hindenburg Line during March 1917. On 11 April 1917 the Division took part in the costly Battle of Bullecourt, before being moved north to positions south of Ypres and on 7 June 1917 took part in the great Battle of Messines Ridge, storming the German positions which had been devastated by the blowing of a chain of massive underground mines. The 13th Battalion was in reserve for the initial assault, then just before midnight moved forwards under cover of darkness into the new reserve line, before relieving the tired 1st New Zealand Brigade in the front line on 9 June. Arthur was killed at Messines near Midland Support Trench on 10 June 1917. The 27-year-old has no known grave, so is commemorated on the Ypres (Menin Gate) Memorial, Belgium. 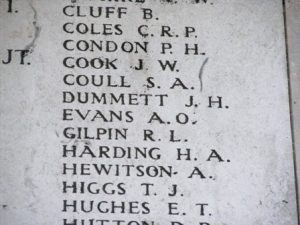 Thomas Aeron Morgan, Private, 27795, Welsh Regiment. Thomas was born at Rhydymul, Cilgerran, the son of Thomas and Catherine Morgan. The family later resided at Roadside, Blaenporth. Thomas resided in Ferndale prior to the war, where he had gained work as a coalminer. He enlisted at Cardiff into the 18th Battalion, Welsh Regiment early in 1915. The battalion was a Bantam battalion, made up of men below the minimum height requirements, which initially moved to Prees Heath in Shropshire, before joining 119 Brigade, 40th (Bantam) Division, and moved to France in June 1916, taking over positions near Loos. Late in 1916 the Division moved south to the Somme, and fought at the Battle of the Ancre, before remaining in the sector over the winter. In March 1917 the Germans withdrew to their shortened line, called the Hindenburg Line, and the 40th Division was among the units which followed the withdrawal. Later in the year the Division took part in the Battle of Cambrai and launched an attack on Bourlon Wood on 23 November 1917. The attack was carried out by 119 Brigade, led by the 12th SWB and 19th RWF. The 17th Welsh was in support for the initial assault, but was soon ordered to advance, to support the two attacking battalions. Heavy fighting raged within the wood over the coming days, with the 18th Welsh also being thrown forwards into the fight, and the Division suffered terribly. Thomas was killed in action in Bourlon Wood on 24 November 1917. The 20-year-old has no known grave and is commemorated on the Cambrai Memorial, Louverval, France. 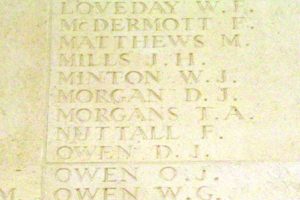 Oliver James Jones, Second Officer, Merchant Navy. Oliver was born in Abercych in 1905, the son of John and Hannah Jones. He married Irene Constance Livingstone Griffiths, of Angel House, Cilgerran in 1938 and the couple set up home at Lluest, Cilgerran. Oliver was a long serving Mariner and by the time war erupted was serving in the Merchant Navy as Second Officer aboard the tanker M.V. Frederick S. Fales. During September 1940, she joined Convoy HX72, which comprised of 42 ships, carrying materials to the United States. On the night of 21 September 1940, the convoy was spotted and attacked by the a Wolf Pack of five German U-Boats, led by Germany’s most famous submariner, Gunther Prien, the man who had so audaciously crept into Scapa Flow to sink the Battleship Royal Oak in 1939. After several losses among its fleet, the Germans withdrew, but the convoy was again hit in the early hours of 22 September 1940. In the darkness the submarine U-100 fired a salvo of torpedoes at the Frederick S. Fales, which exploded and sank some 340 miles west of Bloody Foreland with the loss of 20 men of her crew of 48. Among those killed was Oliver. The 35-year-old has no known grave but the sea, so is commemorated on the Tower Hill Memorial, London. This had been the first use of the Wolf Pack technique on a British Convoy, and it had been proved successful, with ten ships lost and a further three damaged over the two days. 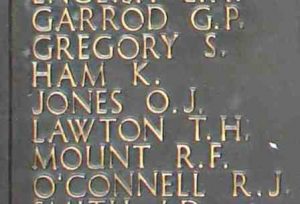