The town of Cilgerran is sat alongside the River Teifi, on the northern edge of Pembrokeshire, bordering Ceredigion to the north. It is the home of Cilgerran Castle, an impressively sited Norman stronghold, which was built around 1100AD. The main War Memorials for the town are located at the gates to the castle, but inside St. Llawddog’s Church is a brass memorial plaque, which was erected on Christmas Day, 1925, and commemorates the parishioners of the Church who fell during the Great War. 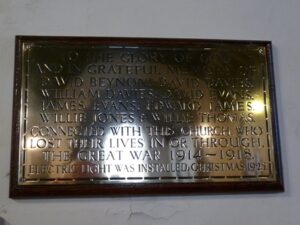 David Beynon, Sapper, 201644, Royal Engineers. David was born in Ferryside, Carmarthenshire, and later moved with his elder brother to live at Cilgerran, where the two boys worked with their Uncle as Coopers. Here, David met and married his wife Esther Mary Beynon (nee Williams), and the young couple set up home at Castle Square, where they had two children together. Little is known of David’s service, but he joined the Royal Engineers, serving with the rank of Sapper throughout his time at war. Sadly, David became one of many men to suffer due to his military service, dying just 18 months after the Armistice on 9 June 1920. He was by then 36 years old, and left his widow and two children behind. David is buried at Cilgerran Churchyard. 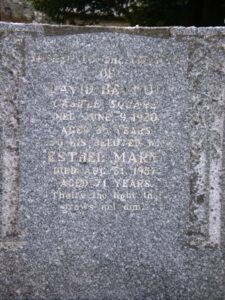 David Davies, Private, 10227, Canadian Mounted Rifles. David was born on 31 May 1882, the son of Thomas and Esther Davies, of Llwyncelyn, Cilgerran. He had emigrated to Canada prior to the war, where he found work as a Carpenter. On 20 July 1915 David enlisted at Sewell, Manitoba into the Canadian Infantry, giving his next of kin as his sister, Mrs Esther Griffiths, who was residing at Heolas, Ammanford. David was posted to the Canadian Mounted Rifles, but was sadly killed while training on 10 August 1915. He was 33 years old, and is buried at Broadview Cemetery, Saskatchewan, Canada.

William Davies, Private, 202483, Welsh Regiment. William was born in London in 1891, the son of Robert Davies. He had come to Cilgerran to work at Forest Farm at some time prior to the war. William married Annie Hayes, the daughter of James and Margaret Hayes of 26, Front Street, Pembroke Dock, who was also working at Forest farm, on 5 October 1916, and the couple set up home at Revoir House, Cemaes Street, Cilgerran. William enlisted into the Welsh Regiment, and was posted to the 9th Battalion, Welsh Regiment. The battalion was involved in heavy fighting during the German offensive on the Somme on 21 March 1918, and suffered heavy casualties over the coming weeks. William was gassed and taken prisoner by the Germans around this time. He was released after the armistice and returned home, but after suffering from ill health for several years, died of tuberculosis at Aberystwyth on 20 September 1925, aged 34 years. Of those named on the village memorial, William was the last to die. He was buried with full military honours at St Llawddog’s Church, Cilgerran. He is not commemorated by the CWGC because his death was too late for official commemoration.

David Albert Evans, Private, 49014, Welsh Regiment. David was the son of Enoch and Letitia Evans, of Plain Dealings, Cilgerran. David had worked as a gardener in Ireland prior to the war, but returned home to enlist into the Army. He was posted to the training camp at Kinmel Park, near Rhyl, where he became a Private with the 3rd Battalion, Welsh Regiment, a training battalion, which supplied recruits to the Welsh battalions on the Western Front. David sadly became ill with pneumonia whilst at Rhyl, and died on 14 February 1917. His body was brought home for burial at Cilgerran, at St. Llawddog Churchyard. His coffin arrived at the Railway Station where it was draped with a Union Jack, and a large gathering of friends and family escorted him to the Churchyard. David had two brothers. One brother, James Samuel Evans was killed while serving with the Black Watch, another brother served in Salonika. 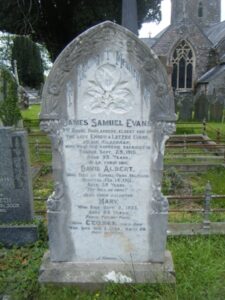 James Samuel Evans, Private, S/4980, Black Watch (Royal Highlanders). James was born at Cilgerran, the son of Enoch and Letitia Evans of Plain Dealings, Cilgerran and was the brother of David Albert Evans and of John Phillip Evans, of Argoed, Glanyrafon Road, Pencoed. Both James and John must have moved to the valleys to work in the mines, and it was there that they both enlisted into the Army, with James being posted to the 9th Battalion, Black Watch. John served with the British Salonika Forces. The 9th Battalion of the Black Watch formed part of 46 Brigade, 15th (Scottish) Division, which landed in France during July 1915. The division saw its first major action during the Battle of Loos, and sadly it was here that James was killed, during the first day of the battle, on 25 September 1915. His grave could not be located, and so he is commemorated on the Loos Memorial, France. In less than fifteen months his brother David was also dead, after catching pneumonia at Rhyl. 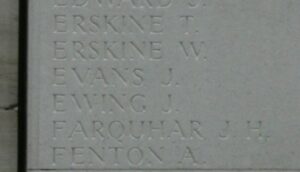 Edward Griffith James, Private, 202704, Welsh Regiment. Edward was born on 10 September 1886, the son of William and Georgina James, of High Street, Cilgerran. He travelled to Carmarthen to enlist into the 4th Battalion, Welsh Regiment. After his training, he was posted to the 9th Battalion, which formed part of 58 Brigade, 19th (Western) Division, which had been in France since July 1915. The Division had fought during the opening attack of the Battle of Loos, and then moved to the Somme, where they took part in the second wave of the attack on Ovillers-La Boiselle on 1 July 1916, capturing the village at heavy cost, and fought through the Somme Battles of Pozieres and the Ancre in 1916. They then moved north to Ypres, and took part in the Battle of Messines. The division then moved further north to Ypres itself, which is where Edward joined up with his battalion, and fought on the Menin Road and at Polygon Wood, before taking part in the fighting at Broodseinde, Poelcappelle and Passchendaele Village itself. After surviving the horrors of Passchendaele, Edward moved with the division to positions north of St. Quentin, which is where he was killed on 18 December 1917. He is buried at Fifteen Ravine British Cemetery, Villers-Plouich. 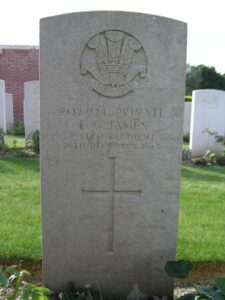 William James Jones, Private, M/295967, Tank Corps. William was the son of Daniel and Margaret Jones, of Church Street, Cilgerran and enlisted at Fishguard into the Army Service Corps, most probably as a Motor Driver. William was then attached to the 8th Battalion of the Tank Corps, William was caught up in the heavy fighting that resulted from the German Spring Offensive on the Somme during March 1918, and was evacuated to No. 12 Stationary Hospital at St. Pol, where he died on 30 April 1918. William was just 20 years old, and is buried at St. Pol British Cemetery, St. Pol-Sur-Ternoise, near Arras in Northern France. 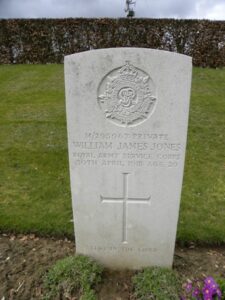 William Thomas, Private, 48948, Royal Army Medical Corps. William was born at Cilgerran, the son of David and Margaret Thomas. He spent four years as a pupil teacher at Cilgerran school before going on to Cardigan Intermediate School and then spent a period at Carmarthen Training College. After qualifying as a teacher he was appointed headmaster at Henry’s Moat School in Pembrokeshire. Having worked there for eighteen months he was promoted to headmaster of Llanddewi Velfry School, where he spent five years before enlisting at the end of 1915.  He was posted to F Company, Royal Army Medical Corps, which was a training company based at Redan Hill, Aldershot. He married Daisy Victoria Thomas, a fellow teacher, from Narberth on 1 January 1916. Not much is known of William’s time at war, but he returned home to Narberth on 11 March 1916 suffering from ill health, and sadly died at home of sickness on 22 March 1916, aged 27. William is buried at Narberth Cemetery. His widow Daisy married William Griffiths Mathias after the war. Their only son, Flying Officer John Edward Mathias, DFC, was killed on 27 April 1944. The photograph of William and Daisy is courtesy of Michael Cullen. 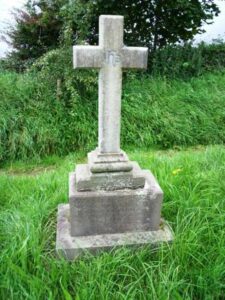