The original R.A.F. station here was named R.A.F. Pembroke, which operated from July 1918 until January 1919 when it was decommissioned. R.A.F. Carew Cheriton was built in 1938 on the site of the WW1 R.A.F. Pembroke, initially equipped with grass runways. The airfield was used as a support base for the flying boat operations at Pembroke Dock. Based here was ‘B’ Flight 1 A.A.C.U. and 595 Squadron Target Towing Flight, equipped with Hawker Henleys.

On 15 April 1941 twelve airmen were killed in an air raid which hit the sick bay. From 1939 to 1942 the Coastal Command Squadrons: 217, 48, 320, 321, 236, 248, 254 and 500 flew patrols from Carew over the Western Approaches, raids along the French coast, the escort of the Irish mail steamer and also Douglas DC-3 passenger services. Also here between 1940 to 1941 the Coastal Command Development Unit was based here, and carried out trials of a new airborne radar equipment. The airfield stopped operational flying in 1942, but became home to No. 10 Radio School, with the training of wireless operators on the radio units.

The airfield is disused, though much remains, and the Control Tower has been restored by the Carew Cheriton Control Tower Group, and can be visited. Several men who were killed while based at Carew are buried at the local Churchyard. These men are commemorated on this page. The photographs of the men are courtesy of Deric Brock, and the graves courtesy of Les Nixon. 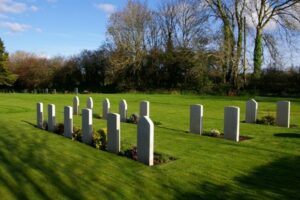 Anthony Leon Victor Barnes, Pilot Officer (Pilot), 40071, Royal Air Force. Anthony was born in London, and resided at Leamington Spa at the outbreak of war. He enlisted into the Royal Air Force, and was posted to No. 1 Anti-Aircraft Cooperation Unit at Carew Cheriton. On 23 April 1940, Anthony was piloting Hawker Henley L3427, along with Wilson, when it crashed near Nash Villa at 11.30 a.m., killing both Anthony and his Navigator, Sergeant Wilson of Tenby. Anthony is buried at Carew (St. Mary) New Churchyard. 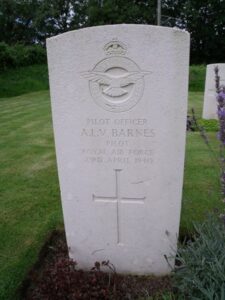 Howard Earl Dabbs, DFC, Pilot Officer (Pilot), J/15608, Royal Canadian Air Force. Howard was born on 28 April 1921, the son of William Leonard Dabbs and Florence Dorothy Dabbs (nee Brown), of Daysland, Alberta, Canada. Howard enlisted into the Royal Canadian Air Force and was posted to 101 (Royal Air Force) Squadron, based at Holme Upon Spalding Moor. He was an experienced pilot, having flown in eight raids in Wellington’s and a further four in Lancaster’s, and had been awarded the Distinguished Flying Cross just four days before his final mission. The citation, published in the London Gazette of 15 December 1942, read; ‘One night in December, 1942, this officer was pilot of an aircraft detailed to attack Frankfurt. When nearing the target area, his aircraft, whilst held in a cone of searchlights was hit by anti-aircraft fire and one of its engines was put out of action. Despite this, Pilot Officer Dabbs flew on to his target but, as the bomb release mechanism was unserviceable, he was unable to drop his bombs. Displaying skilful airmanship he flew his aircraft back to this country without the assistance of wireless aids. With a full bomb load he made a masterly landing in poor visibility. This officer’s skill and determination in the face of adverse circumstances set an example worthy of the highest praise. He has flown on several sorties with distinction.’ On the night of 6 December 1942, Howard took off in his Lancaster, Serial ED322, bound for Mannheim. On the return leg the following morning, the Lancaster became lost over the Pembrokeshire coast, and crashed into the sea off Tenby, killing the crew. Over the next ten days, four bodies washed ashore on various beaches in the area. Howard’s body was one of these, and he is buried in Carew (St. Mary) New Churchyard. He was just 20 years old. The three other crewmen were not recovered and are remembered on the Runnymede Memorial in Surrey, England. 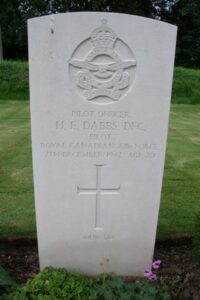 Charles Warner Jackson, Flying Officer (Pilot), J/20125, Royal Canadian Air Force. Charles was born on 5 April 1919, the son of John Warner Jackson and Ella Eugene Jackson (nee Holzkamp), of Calgary, Alberta, Canada. He enlisted into the Royal Canadian Air Force, and was posted to 420 Squadron, based at Waddington. On 11 April 1943, Charles was flying Vickers Wellington X, Serial HE422 and became lost on the return journey following a bombing raid to Frankfurt. Believing that the Wellington was low on fuel, Charles ordered his crew to bale out over Pembrokeshire. All the men landed safely, but Charles’ parachute became entangled, and he fell into the sea off Tenby North Beach and drowned. Charles was 24 years old, and was buried in Carew (St. Mary) New Churchyard. 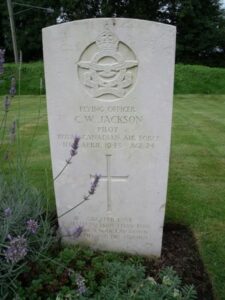 Zenon Maciej Wincenty Jurewicz, Sergeant (Pilot), Polish Air Force. Zenon was born at Gorki, Poland, on 7 December 1917. He was freed from a Russian Labour Camp in Siberia, and arrived in Britain in September 1942. Zenon then enlisted into the Polish Air Force, and served with 595 Squadron, towing targets for Manorbier Gunnery School. He was killed when his Hurricane, Serial LB650 crashed in Heywood Lane, Tenby on 4 July 1944. He was 26 years old, and is buried at Carew (St. Mary) New Churchyard. 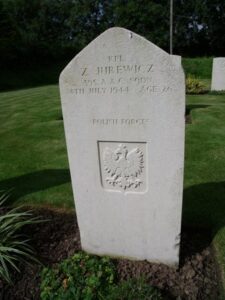 Jerzey Kontny, Sergeant, Polish Air Force. Jerzey was born at Katowice, Poland, on 2 October 1916. He served with the 6th Polish Air Force Regiment against the German invasion of Poland, before coming to Britain in June 1940, arriving at RAF Carew Cheriton on 9 November 1940. He was killed when his Tiger Moth crashed into a water tower at Manorbier Gunnery School on 18 July 1941, and is buried at Carew (St. Mary) New Churchyard. Jerzey was 24 years old, and was posthumously awarded the Polish Air Force Medal in 1947. 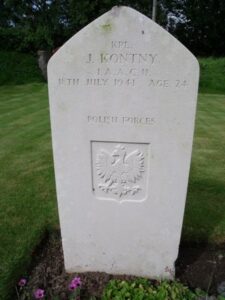 Marinus Renardus van Kooij, Lieutenant (Navigator), Royal Netherlands Naval Air Service. Marinus was born in Amsterdam on 15 February 1904. He arrived at Carew Cheriton in October 1940. Marinus had trained as a Pilot with K.L.M. before the war, so joined the Royal Netherlands Naval Air Service, where he served as a Navigator, attached to 320 (R.A.F.) Squadron, based at Carew Cheriton. He was killed while taking off for anti-shipping patrol in Hudson T9364, along with his fellow Dutchmen Overdijk, Rademaker and Michels. Marinus was 37 years old, and is buried at Carew (St. Mary) New Churchyard. 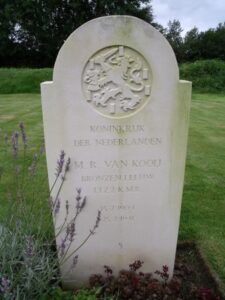 Stewart William James Lamerton, Sergeant (Observer), 922912, Royal Air Force Volunteer Reserve. Stewart was the Stewart and Mabel Lamerton, of Devonport. He married Enid Combellack at Tiverton in 1937. He enlisted into the Royal New Zealand Air Force, and was posted to 236 (R.A.F.) Squadron, based at Carew Cheriton. At 22.30 hrs on 23 October 1941, while serving as Observer aboard Bristol Blenheim V6305 at Carew, the aircraft struck a hedge by Hayes Farm whilst coming into land, killing Stewart and his Pilot, Francis McCaffry. Stewart’s body was brought home for burial in Constantine, Cornwall, while McCaffry was buried in Carew. 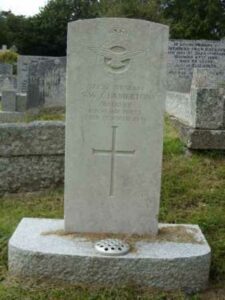 Francis Mervyn McCaffry, Sergeant (Pilot), 40651, Royal New Zealand Air Force. Francis was the son of James and Eliza McCaffry, of Bunnythorpe, Wellington, New Zealand. He enlisted into the Royal New Zealand Air Force, and was posted to 236 (R.A.F.) Squadron, based at Carew Cheriton. At 22.30 hrs on 23 October 1941, while making his final approach to land his Bristol Blenheim V6305 at Carew, the aircraft struck a hedge by Hayes Farm, killing Francis and his Observer Sergeant Stewart Lamerton. Francis was buried at Carew (St. Mary) New Churchyard. Stewart Lamerton is buried at Constantine, Cornwall, where his family home was. 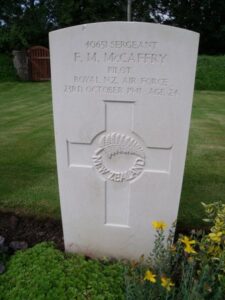 Jan Michels, Sergeant (Pilot), Royal Netherlands Naval Air Service. Jan was born in Decenter, Holland on 15 October 1914. After the German invasion of Holland, he escaped to Britain through Boulogne, and joined the Royal Netherlands Naval Air Service, being posted to 320 Squadron, based at Carew Cheriton. Jan was killed, along with his crew of Overdijk, Rademaker and Van Kooij, when his Hudson T9364 crashed on take off at Carew on 25 February 1941. He was 26 years old, and is buried at Carew (St. Mary) New Churchyard. 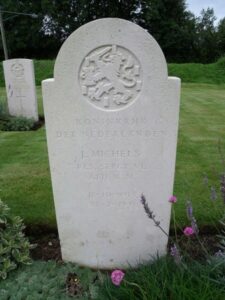 Robert John Middleton, Flight Sergeant (Wireless Operator/Air Gunner), R/91294, Royal Canadian Air Force. Robert wwas born in Dundee on 19 August 1917, the son of Nicoll and Mary Middleton. His father was killed while serving with the Black Watch in the Great War, and his mother then emigrated to Toronto, Ontario, Canada. Robert enlisted into the Royal Canadian Air Force, and after training as a Wireless Operator/ Air Gunner was posted to 101 Squadron, Royal Air Force, which was based at RAF Holme Upon Spalding Moor. Robert was one of the crew of Avro Lancaster ED322, piloted by Howard Earl Dabbs, which crashed into the sea off Tenby on 7 December 1942, killing all the crew. Robert’s body washed ashore ten days later, and he was buried at Carew (St. Mary) New Churchyard. He was 25 years old. 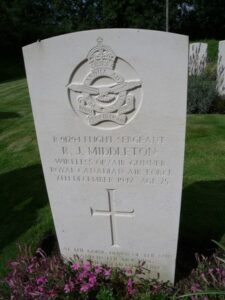 Franciscus Overdijk, Stoker 2nd Class, Royal Netherlands Naval Air Service. Franciscus was born in Leiden, Holland on 3 July 1920. He joined the Dutch Navy, but after the German invasion escaped to Britain where he was posted to the Royal Netherland Naval Air Service. He joined 320 Squadron at Carew Cheriton. Franciscus was killed in the crash of Hudson T9364, along with Michels, Rademaker and Van Kooij, on 25 February 1941. He is buried at Carew (St. Mary) New Churchyard. 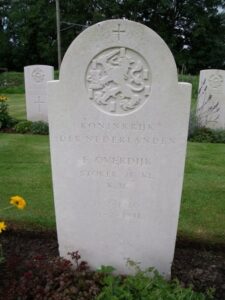 Cornelius Jacobus Rademaker, Corporal, Royal Netherlands Naval Air Service. Cornelius was born in Noorwijk, Holland on 16 August 1911. He joined the Dutch Navy before escaping the Germans and being posted to the Royal Netherland Air Force, joining 320 Squadron at Carew Cheriton. He was killed in the crash of Hudson T9364, along with Overdijk, Michels and Van Kooij on 25 February 1941, and is buried at Carew (St. Mary) New Churchyard. 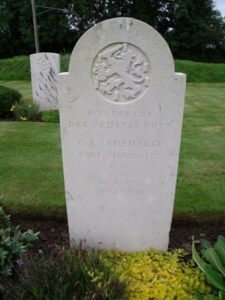 Morris Ezra Shaw, Flight Sergeant (Pilot), R/77481, Royal Canadian Air Force. Morris was the son of W. A. Shaw and Constance Minns Shaw, of Ogden, Utah, U.S.A. His mother was Canadian, and so Morris enlisted into the Royal Canadian Air Force, being posted to 152 (R.A.F.) Squadron, based at Angle. On 26 August 1942, while piloting Spitfire EP164, he collided with another Spitfire flown by Sergeant Wooldridge, and both crashed into the sea off Tenby. Only Morris’ body was recovered, and he is buried at Carew (St. Mary) New Churchyard. He was 29 years old. 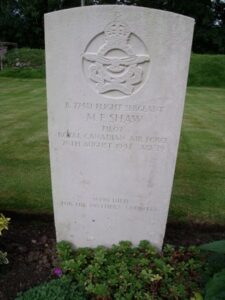 Robert Gordon Smith, Flight Sergeant (Air Observer), R/93318, Royal Canadian Air Force. Robert was born in Athenry, Galway, Ireland on 18 February 1917, the son of Robert Young Smith and Mary Helen Smith. The family emigrated to Canada prior to the war and Robert married Isabelle there. He enlisted into the Royal Canadian Air Force, and was posted to 101 (R.A.F.) Squadron, based at Holme Upon Spalding Moor. Robert was Navigator aboard Lancaster ED322, piloted by Howard Earl Dabbs, which crashed into the sea off Tenby after becoming lost on 7 December 1942. He was buried on 15 December at Carew (St. Mary) New Churchyard, and was 24 years old. 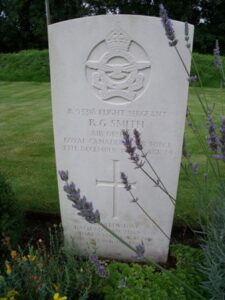 Archibald Gordon Willis, Sergeant (Air Gunner), 568341, Royal Air Force. Archibald was the son of Archibald Frank and Nellie Ward Willis, of Chelsea, London. He flew as an Air Gunner with 48 Squadron, Royal Air Force, which was based at RAF Carew Cheriton. Archibald was killed when his Avro Anson K8829 crashed into a Fairey Battle, Serial N0250 on take off from Carew on 31 July 1940. He was 20 years old, and is buried in Carew (St. Mary) New Churchyard. 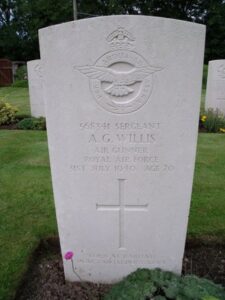 Richard Edmund Wilson, Sergeant (Observer), 565833, Royal Air Force. Richard had been educated at Monmouth School, before joining the Royal Air Force. He had served at Basra for three years prior to the war, when he was posted to RAF Carew Cheriton. Richard met and married Myfanwy Dobson, from Tenby, but he was killed when his Hawker Henley, Serial L3427 crashed at Nash Villa on 23 April 1940. Richard is buried at Carew (St. Mary) New Churchyard. His widow gave birth to their daughter five months later. 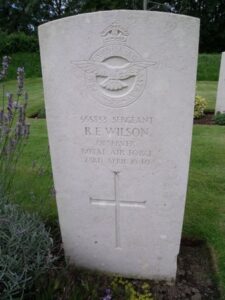 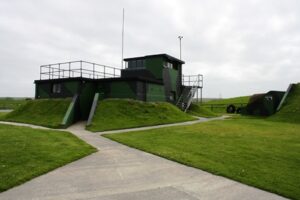