Broad Haven sits on a beautiful position on the coast of Pembrokeshire, astride the B4341 from Haverfordwest. Little is known of its history, but it probably grew as a fishing community, and is now best known for its tourism. The War Memorial takes the form of a granite Celtic Cross, and sits in a delightful position on Settlands Hill, overlooking the Atlantic Ocean. 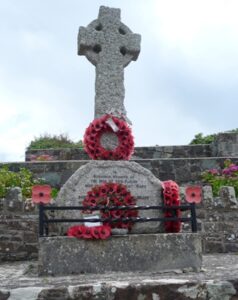 Walter James Griffiths, Private, 73207, Royal Welsh Fusiliers. Walter was the son of Joseph and Frances Griffiths, of Haroldstone Hill, Broad Haven. He enlisted at Carmarthen into the Army, and was posted to France at sometime in 1917, joining the 2nd Battalion, Royal Welsh Fusiliers, which was by then attached to the 33rd Division. Walter possibly saw action at Arras, at the Battle of the Scarpe and at Bullecourt, before the division headed to Ypres. Here it saw heavy fighting on the Menin Road and at Polygon Wood. Walter was killed in action during Third Ypres, on 26 November 1917, aged 19. He has no known grave, and so is commemorated on the Tyne Cot Memorial, near Ypres. Walter is not commemorated on the Broad Haven Memorial. 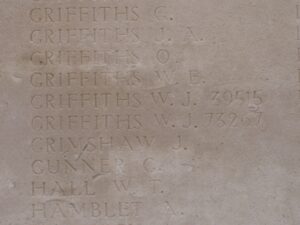 David James Jenkins, Private, 200919, Welsh Regiment. David was the son of Thomas and Mary Jenkins, of Broad Haven. He must have worked as a miner prior to the war, as he enlisted at Tumble into the Army, and joined the 1/4th Battalion, Welsh Regiment. The Battalion formed at Carmarthen during August, 1914 and moved to Barracks at Pembroke Dock, where it became attached to 159 Brigade, 53rd (Welsh) Division. The Division moved to the Mediterranean, sailing from Devonport in July 1915 arriving at Mudros by 5 August 1915. From here they moved to Gallipoli, landing on 9 August. Here they immediately faced the chaotic leadership that was to lead to the ultimate failure of the campaign, and spent the next few days in isolated pockets, fighting against a Turkish counter-attack during the Battle of Sari Bair, and then at the Attack on Scimitar Hill. The Division remained here throughout the coming months, and suffered severe losses in manpower strength during the great November 1915 blizzard on Gallipoli, when its total strength was reduced to less than that of a full-strength Brigade. On 11 December, 1915 the Division was evacuated to Mudros, and by 23 December 1915 were moved to Egypt. They remained on the Suez Canal Defences for the next twelve months, and in early 1917 moved into Palestine, where they remained for the duration of the war, fighting at the Battles of Gaza, and successfully capturing Jerusalem. David was killed during the First Battle of Gaza, on 27 March 1917. He has no known grave, and is commemorated on the Jerusalem Memorial, Israel. He was 26 years old.

William John Jenkins, Private, 9593, South Wales Borderers. William was born at Broad Haven in 1890. Soon after his birth, the family moved to Newbridge, Monmouth. William enlisted there into the 2nd Battalion, South Wales Borderers on 28 May 1907. The Battalion was based in China at the outbreak of war, and after having defeated the German Garrison at Tientsin, was recalled to Britain. Here it joined 87 Brigade, 29th Division. The Division moved to Gallipoli via Egypt, landing on 25 April 1915, and saw heavy fighting over the coming days. William suffered several bouts of sickness at Gallipoli, in an arduous campaign that took its toll on many men’s health. The Division remained here until evacuation to Egypt on 11 January 1916 and then moved to the Western Front on 15 March. The Division took part in its first major action in France during the 1916 Somme Offensive, suffering heavy casualties. In the Spring of 1917, they fought at the Arras Offensive, and then moved further north, and fought at Third Ypres, before moving to Cambrai. Here they fought at the Battle of Cambrai in November and December, 1917 before moving back to Flanders early in 1918. William was medically downgraded and on 17 February 1918 was transferred to the Labour Corps, with the service number 527693, and was posted to Hightown. He married Emily Kennedy in Liverpool early in 1918, but was then posted to the 567th Home Service Employment Company at Barrow-in-Furness on 2 March 1918. William died of pneumonia at the Military Hospital at Barrow-in-Furness on 1 July 1918, aged 28, and is buried at Barrow-in-Furness Cemetery, Lancashire. His widow Emily died a year later.

Henry Jones, Gunner, 64680, Royal Garrison Artillery. Henry was born at Walton West, the son of Thomas and Martha Jones. He resided at Treffgarne prior to the war, and enlisted at nearby Haverfordwest along with his friend Benjamin Lawless, into the Royal Garrison Artillery. After training, the friends were split up, and Henry joined the 278th Siege Battery, R.G.A. The battery moved out to the Western Front on 18 March 1917, armed with 4 x 6 in Howitzers (26 cwt). They saw their first major action during Third Ypres, and suffered many casualties there during the course of the Battle, when they were attached to the 53rd HAG Brigade. The following year was one of turmoil on the Western Front, and Henry would have seen plenty of action during the months of March and April, during the German Offensive. As the year pushed on, the Allies gained the upper hand, and began the drive for victory during August 1918, after a series of successful Battles, at Villers-Brettoneux and Albert. During September the British pushed towards the Hindenburg Line, and in October it was smashed, allowing the Allies to pour through, and drive on towards Germany. Henry was wounded during the final offensives of the war, and was evacuated to the Base Hospital at Etaples for treatment. Sadly he died of his wounds there on 6 November 1918. He was 26 years old, and is buried there, at Étaples Military Cemetery. 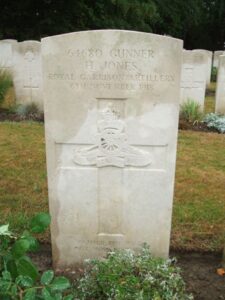 Benjamin Lawless, Gunner, 64681, Royal Garrison Artillery. Benjamin was the son of John and Martha Lawless, of Bay View, Broad Haven. He travelled to nearby Haverfordwest with his friend Henry Jones and they enlisted together into the Royal Garrison Artillery. After their basic training, the friends were split up, and Benjamin joined the 64th Siege Battery, R.G.A. The Battery was equipped with two rail mounted 12” Howitzers, and attached to the Fifth Army. The Fifth Army was in the line in front of Cambrai in the spring of 1918 when it was caught by the German Spring Offensive of 21 March 1918. The Fifth Army crumbled in the face of the ferocious onslaught that was brought upon them, and over the coming days retreated in turmoil. Benjamin was wounded during the ensuing fighting, and sadly died of a result on 9 April 1918. He was 26 years old, and is buried at Sailly-Labourse Communal Cemetery Extension, France. 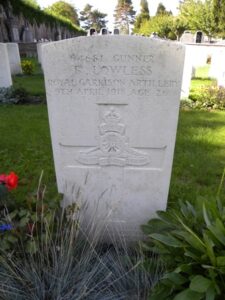 Jesse Max, Corporal, S4/145085, Royal Army Service Corps. Jesse was the son of Thomas and Ann Max, of Blockett Farm, Little Haven, and the husband of Maude E. Max, of Burton House, Little Haven. Jesse had enlisted at Haverfordwest into the Army, and was posted to the 58th Field Butchery, Army Service Corps. Jesse was sent out to Egypt with his unit, and followed the British advance into Mesopotamia throughout 1917. The campaign in Mesopotamia was to be plagued by illness, and Jesse was one of the men to succumb to this, when he died of sickness on 10 September 1918. Jesse was 37 years old, and is buried at Amara War Cemetery, Mesopotamia.

Joseph Mills, Private, 5892, Welsh Regiment. Joseph was the son of John and Jane Mills, of Woodland, Little Haven. He had served with the 4th Battalion, Welsh regiment during the war, but due to suffering from wounds at some time had been medically downgraded, and transferred to the Labour Corps, with the new service number 483046. Joseph sadly died as a result of his wounds, just days after the end of the war, on 15 November 1918. He was 31 years old, and is buried at Milford Haven Cemetery. His cousin Albert Mills, of Milford Haven sadly drowned whilst bathing in the River Lys in Flanders on 25 September 1917.

William Alban Rogers, Rifleman, 653437, London Regiment. William was the son of Richard and Mary Anne Rogers, of Broad Haven. He had married prior to the outbreak of war, and lived with his wife, Nellie Rogers, at 9, Cintra Park, Upper Norwood, London. William enlisted there into the Army, and joined the 21st Battalion (1st Surrey Rifles), London Regiment, which was attached to the 142 Brigade, 47th (2nd London) Division. The Division moved to France during March 1915, and served with distinction on the Western Front throughout the war. The new designation of the Division, its Brigades and other constituent units changed from the 2nd London to 47th in mid May 1915. The Division fought at the Battle of Aubers, and the Battle of Festubert during May, 1915 and in September fought at the Battle of Loos, and subsequent Action of Hohenzollern Redoubt. They were north of Arras when the Germans attacked Vimy Ridge, and then moved south to the Somme, where they fought at the Battle of Flers-Courcelette, and then at the Battle of Le Transloy, where the Division captured Eaucourt l’Abbe, and took part in Attacks on the Butte de Warlencourt. Early in 1917 the Division moved north to Belgium, and took part in the Battle of Messines, which is where William was killed in action on 7 June 1917. William has no known grave, and so is remembered on the Menin Gate Memorial, Ypres. He was 35 years old. 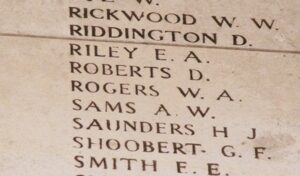 Thomas George Sinnett, Sergeant, 1135365, Royal Air Force Volunteer Reserve. Thomas was the son of Frederick and Anne Jane Sinnett, of Milford Haven. He served with 19 Operational Training Unit, Royal Air Force. On 16 October 1942, Thomas was a crewman aboard an Armstrong Whitworth Whitley, Serial BD-212, when it crashed on a training flight. The aircraft and its crew of five must have been lost at sea, and nothing is known of their fate. Thomas was 21 years old, and is commemorated on the Runnymede Memorial, Surrey.