Brawdy is situated at the northeast corner of St Brides Bay. The southern half of the parish is in the Pembrokeshire Coast National Park, and includes the villages of Penycwm and Newgale, and the hamlets of Eweston, Tancredston, and Trefgarn Owen. During the second half of the 20th century, it was home to a large Fleet Air Arm Station, HMS Goldcrest, and later became an RAF Station, before the base was given over to the army, and renamed Cawdor Barracks. Over the years several members of the forces who died while on service at Brawdy were buried within the cemetery at St. David’s Church. The men of the parish who fell during World War Two are commemorated on a brass memorial plaque, which is situated within St. David’s Church. There does not appear to be a memorial for any parishioners who fell during the Great War, but I have identified two, and these men are commemorated below. 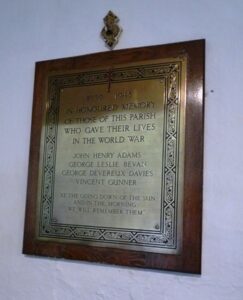 Thomas Arthur Evans, Private, 307315, Lancashire Fusiliers. Thomas was born in Cornel Bach, Brawdy, the son of James and Sarah Evans. The family later resided in Knareston, Penycwm. He enlisted at Carmarthen into the army and was posted to the 2/8th Battalion, Lancashire Fusiliers, which was attached to 197 Brigade, 66th (2nd East Lancs) Division. The Division concentrated on the Western Front by 16 March 1917 and moved to the Flanders Coast. At the end of September 1917 it moved to Ypres, and took part in the Battle of Poelcapelle. Thomas was killed in action here on 9 October 1917, aged 23. He has no known grave and is commemorated on the Tyne Cot Memorial, Belgium. 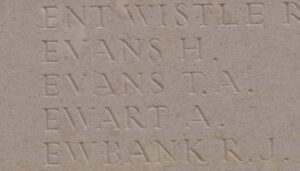 William James, Private, 25272, South Wales Borderers. William was born in Brawdy, the son of Henry James. He enlisted at Tonypandy into the South Wales Borderers and originally served with the 10th Battalion, South Wales Borderers, which was attached to 115 Brigade, 38th (Welsh) Division. He was later transferred to the 2nd Battalion, South Wales Borderers, which was attached to 87 Brigade, 29th Division. He possibly joined the battalion after the re-organisation of the 38th Division early in 1918. The division had seen terrible fighting during the war but April 1918 would see some of the hardest fighting it encountered during the entire campaign, when it became involved in the desperate actions following the launching of the German Lys offensive on 9 April 1918. William was killed in action on 11 April 1918, two days into the battle. He is buried in Outtersteene Communal Cemetery Extension, Bailleul, France. 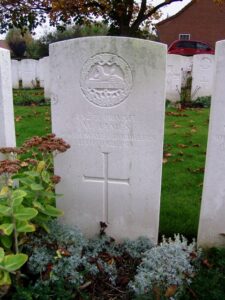 John Henry Adams, Sergeant, 1412902, Royal Air Force Volunteer Reserve. John was the son of George Thomas Adams and Mary Eliza Adams, of Haverfordwest. He served with 37 Squadron, Royal Air Force, which was equipped with the Vickers Wellington, and operated in the Middle East in support of the ground offensive in North Africa. John was killed during the invasion of Italy on 27 January 1944. He is commemorated on the Malta Memorial, Malta. 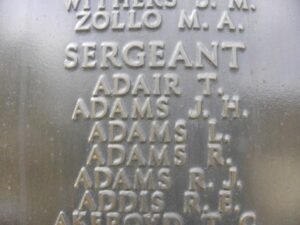 George Leslie Bevan, Fusilier, 3977294, The Royal Fusiliers (City Of London Regt). George was the son of George Henry and Olive Mary Bevan. He had been born at Brawdy in 1923, and the family later moved to Ewell, Epsom, Surrey. George enlisted into the army, and was posted to the 2nd Battalion, Royal Fusiliers. The battalion had been in France with the BEF at the outbreak of war, and reformed after the evacuation from Dunkirk. It moved to North Africa during March 1943, taking part in the campaign in Libya, before landing in Italy later that year. George was killed during the fighting around Monte Cassino on 13 May 1944, aged 20. He is buried in Cassino War Cemetery, Italy. 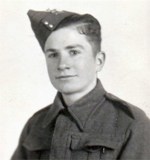 George Devereux Davies, Sergeant, 924555, Royal Air Force Volunteer Reserve. George was the son of Austin George and Mary Ann Davies, of Brawdy. He served with the Royal Air Force Volunteer Reserve, and was posted to 13 O.T.U., where he trained as an Observer. On 17 July 1941, George was part of the crew of a Bristol Blenheim IV, Serial R3805, which took off from R.A.F. Finmere, near Buckingham on a Navigation exercise.  Whilst circling the airfield, both engines cut out and the Blenheim crashed, killing George and his Pilot. George was 27 years old, and is buried at Haverfordwest (Prendergast) Cemetery. 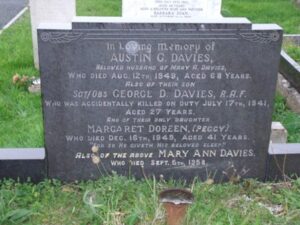 Vincent Gunner, Private, 14623416, The King’s Own Scottish Borderers. Vincent was the son of Alfred Albert Victor and Martha Jane Gunner, of Penycwm. He joined the army late in 1942, and was posted to India with the 2nd Battalion, King’s Own Scottish Borderers. After undergoing jungle training in India, the battalion sailed with the 7th (Indian) Division to Burma in September 1943. They crossed into the Arakan, and took part in the actions at Ngakydauk Pass. Vincent was killed in action here on 15 May 1944. He was 19 years old, and is commemorated on the Rangoon Memorial, Myanmar. 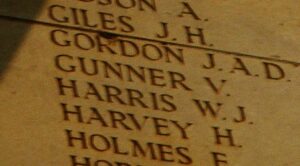