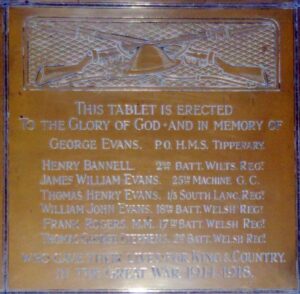 Henry John Bannell, Corporal, 7006, Wiltshire Regiment. Henry was born in Dogdean, Salisbury in 1884, the son of William and Sarah Elizabeth Bannell. He married Sarah Jane Johns whilst working at Bosherston prior to the war, and the couple resided at New Sarum, Wiltshire. Henry enlisted at Salisbury into the 2nd Battalion, the Wiltshire Regiment, which formed part of 21 Brigade, 7th Division based at Lyndhurst. The Division landed at Zeebrugge on 7 October, 1914, but the Port was already falling to the Germans, and so they were sent to Ypres, where they fought in the First Battle of Ypres. They stayed in the Northern part of the Western Front throughout 1915, fighting at the Battles of Neuve Chapelle, Aubers Ridge, Festubert, Givenchy and the Battle of Loos, before the Brigade was transferred to the 30th Division on 19 December 1915. The first major engagement for the Division was at the opening of the Battle of the Somme, and Henry was killed in action on the Somme on 8 July 1916, aged 31, during the Battle of Albert. He is buried at Bernafay Wood British Cemetery, Montauban, in Grave G. 45. 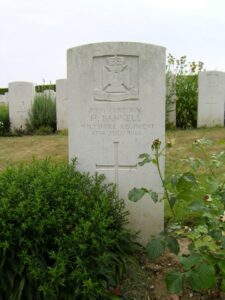 George Evans, Petty Officer, 206834, Royal Navy. George was born in Bosherston on 22 February 1883. He was the husband of Alice Rose Evans, of 93, Gwyther St., Pembroke Dock, and served aboard the Royal Naval Destroyer Leader H.M.S. Tipperary. The Tipperary led the 4th Destroyer Flotilla of the Grand Fleet, commanded by Sir John Jellicoe, and fought at the Battle of Jutland. On the afternoon of 31 May 1915 the German High Seas Fleet were sighted off the coast of Jutland, and were intercepted by the British Grand Fleet led by Jellicoe, who had steamed from their base at Scapa Flow with this aim. The battle began that afternoon and raged on overnight. The Tipperary sighted a line of battleships closing toward her at 12.03 a.m. on the night of 31 May – 1 June, and flashed a recognition signal at them. Unfortunately they were the German Battleships ‘Westfalen’, ‘Nasau’ and ‘Rhineland’, accompanied by the German light cruisers ‘Stuttgart’ and ‘Hamburg’. The ‘Westfalen’ opened fire, raking the Tipperary with over 100 rounds of high explosive shells, and within minutes the Tipperary became a blazing wreck. The fuel and ammunition on board her soon caught alight, finally sinking at around 2.00 a.m. on the morning of 1 June 1915. Of the 197 crew members aboard her, 185 were dead, one of these being George Evans. He was aged 33, and is remembered on the Portsmouth Naval Memorial, Column 11. George is also commemorated on a stained glass window in the church, which had been installed at the behest of his widow in 1916 and was unveiled by the Superintendent of Pembroke Dock, Captain Gilpin Brown. 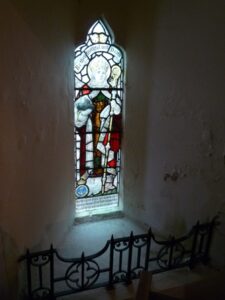 George Evans, Sergeant, 87042, Welsh Regiment. George was the son of George and Jemima Evans, of Peny Wen, Stackpole, and served with the 1st Battalion, Welsh Regiment. The battalion had served during the war with 84 Brigade, 28th Division, and had seen action on the Western Front, before moving to Salonika in 1915. After the war, the battalion returned to Cardiff, before embarking for India. George died in India on 10 December 1919. He was 28 years old, and is commemorated on the Kirkee 1914-1918 Memorial, India. George not named on the Bosherston Memorial, although his brother William John Evans is.

James William Evans, Private, 143031, Machine Gun Corps. James was born in Bosherston, the son of Thomas and Alice Evans, of Kent House, Bosherston. He originally enlisted at Pembroke into the Welsh Regiment with the Army Number 15547, but was transferred into the R.D. Company, Machine Gun Corps. James died of sickness at the Welsh Hospital, Whitchurch on 22 October 1918, aged 36. His body was brought home and he was buried with full military honours in Bosherston (St. Michael) Churchyard. 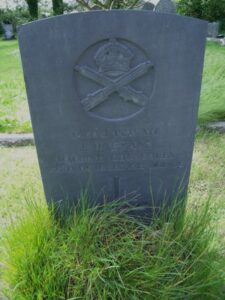 Thomas Henry Evans, Private, 3403, South Lancashire Regiment. Thomas was the son of Thomas and Alice Evans, of Kent House, Bosherston. He enlisted at Pembroke into the 1st/5th Battalion, South Lancashire Regiment, part of 166 Brigade, 55th Division. The Division had fought at the Somme, and at Passchendaele and Cambrai but were sent to the ‘quiet sector’ of the Front around Givenchy and Festubert on 15 February 1918. Between 9 and 29 April the relative peace of this sector was smashed when the German Spring offensive swept upon them. The Division bravely held out, gaining a well deserved reputation for their fighting qualities, prompting the siting of the Divisional Memorial at Givenchy after the war. They stayed in the same area until late August 1918 when the great advance began, and in the defensive period leading up to this, Thomas was fatally wounded. Thomas died of wounds on 20 July 1918, aged 22, and is buried at Pernes British Cemetery, Grave V. F. 13. 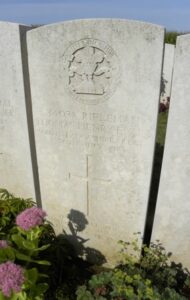 William John Evans, Private, 28106, Welsh Regiment. William was born in Stackpole, the son of George and Jemima Evans, of Pen y Wen. He enlisted at Bridgend into the 18th Battalion, Welsh Regiment, part of 119 Brigade, 40th Division. The 18th Welsh was a Bantam Battalion, formed by men who would have been too short for regular army service before the needs of war necessitated a reduction in standards for their intake. The Division moved to France between 1 and 9 June 1916, moving to Loos, but were sent to the Somme in late 1916, taking part in the Battle of the Ancre. They followed the German retreat to the Hindenburg Line in March 1917, and also played a big part in the Battle of Cambrai in the Winter of 1917, attacking Bourlon Wood. On 21 March 1918 the Division were caught up in the German Offensive, and fought at the Battle of St. Quentin and the First Battle of Bapaume, before moving north to Flanders, where they fought in the Battle of Estaires, and the Battle of Hazebrouck. It was on the second day of the latter battle, on 13 April 1918, that William was killed in action aged 33. William is remembered on the Ploegsteert Memorial, Panel 7. His brother George died on active service in India in 1919. 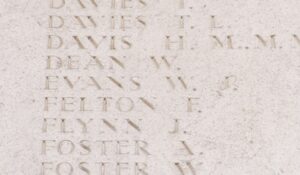 Frank Rogers MM, Lance Corporal 26388, Welsh Regiment. Frank was the son of John and Elizabeth Rogers, of Bosherston. He enlisted at Ammanford into the 17th Battalion, Welsh Regiment. The 17th Welsh was a Bantam Battalion, forming part of 119 Brigade, 40th Division. Frank was fighting with the Battalion at Bourlon Wood, during the Battle of Cambrai when he was killed in action on 25 November 1917, aged 29. Frank was an extremely brave man who had been awarded the Military Medal for Bravery in the Field, when on 29 July 1917 he single handedly stalked and captured a German soldier. He is remembered on the Cambrai Memorial, Louverval, France. 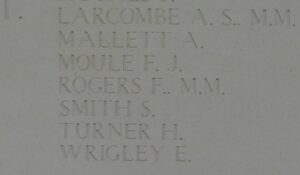 Thomas George Stephens, Private, 53659, Welsh Regiment. Thomas was born in Bosherston, and enlisted at Llanelli into the 2nd Battalion, the Welsh Regiment, part of 3 Brigade, 1st Division. The Division had been in France since the opening Battles of Mons and Le Cateau, and had taken part in some of the fiercest fighting of the war: at the Marne, the Aisne, at First Ypres, the Battle of Aubers, the Battle of Loos and during the Battle of the Somme in 1916. It had suffered terrible losses and Thomas would have been among a large number of men to join the battalion, probably late in 1916, to help rebuild its strength. After a long winter in Flanders, they took part in the Battle of Passchendaele, and it was during the latter stages of this that Thomas was killed in action on 9 November 1917. He is commemorated on the Tyne Cot Memorial, Zonnebeke, Panel 93 to 94. 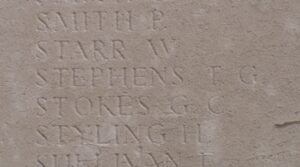 An engraved brass plaque inside the Church reads; “To The Glory Of God and In Memory of Richard Warlow Howells Killed in the Execution of His Duties as a Coastguard, by a Mine on Broadhaven Beach Saturday 9th January 1943.” 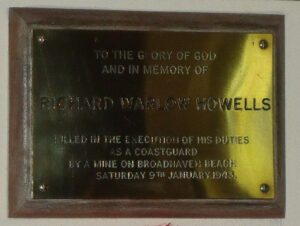 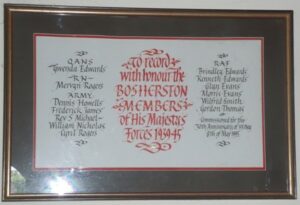 Also inside the Church is a framed scroll, which commemorates the members of the Parish who served during World War Two. The scroll lists the following names;

In addition, but not listed on the scroll was the single casualty of the area to have lost his life during World War Two.

William Joseph Canton, Private, 5111738, Royal Warwickshire Regiment. William was the Son of John H. and Lilian Canton, of Stackpole. He served with the 1/7th Battalion, The Royal Warwickshire Regiment, which was a Territorial unit, and had fought in France during the retreat to Dunkirk in 1940. Members of the Battalion were infamously murdered by the S.S. after their surrender. After the Normandy Landings of 6 June 1944, the 1/7th Warwicks landed at Queen Beach on 29 June. The first engagement for the 1/7th was on 8 July 1944, to capture the village of St Contest. It was a hard fought battle as they were up against the first-rate 25th SS Panzer Grenadiers. Even so by 6.30pm they had reached their objective having lost 26 men and 96 wounded. William was killed just days later, on 17 July 1944. He was 26 years old, and is commemorated on the Bayeux Memorial, France. William is also commemorated on the War Memorial at Stackpole Elidor. 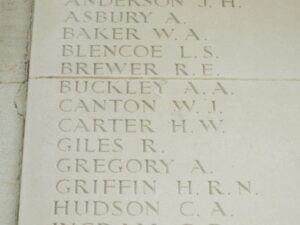