Bletherston is a village and parish located about six miles north of Narberth and eight miles north-east of Haverfordwest. At the centre of the village sits St. Mary’s Church, part of which dates from the 12th Century. Inside the Church is a single war memorial plaque which commemorates Lawrence Robert Vaughan Colby, the heir to the Ffynone Estate, who was killed during the Great War. The photograph of the Church is by Philip Halling (Geograph.org), and the memorial photograph was kindly supplied by Mike Berrell. 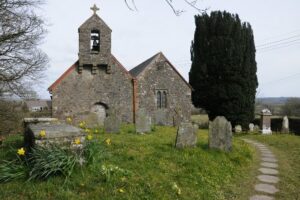 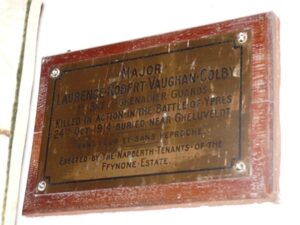 Lawrence Robert Vaughan Colby, Major, Grenadier Guards. Lawrence was born at Brynog, Trefilan, on 3 April 1880, the only son of John Vaughan Colby, of Ffynone, Pembrokeshire, and Anne Harriet Colby. He was educated at Bournemouth and Eton prior to being commissioned into the Grenadier Guards in 1899. Lawrence served during the Boer War and was greeted by huge crowds upon his return to Cilgerran in 1901.

By the time of the outbreak of the Great War, he was serving as a Major with the 1st Battalion, Grenadier Guards, attached to 20 Brigade, 7th Division. The Division was formed during September, 1914 and landed at Zeebrugge on 6 October, 1914. By now the Germans had taken a strong grip on most of Belgium, and the city was under attack, so the Division was moved via Bruges, then Ostend, Ghent and Roulers to Ypres, where it became the first British Division to hold the city.

Major Colby was in command of No. 4 Company, which formed the advance guard, and reached Ypres at 14.00 on 14 October 1914. His company, together with King’s Company and the 3rd Company, were detailed to find the outposts on the Menin and Messines Road. It was during this afternoon that the first Germans were encountered, when a number of Uhlans were spotted and fired upon. News then reached the Battalion HQ that a strong force of Germans was advancing towards Ypres so the battalion begun digging trenches, ready to defend the city of Ypres.

The 7th Division, the first British Division to hold the city of Ypres, was ordered to hold on and await the arrival of I Corps, which had been fighting on the Marne. The 3rd Cavalry Division was in support, while the French held Ypres itself.

The Grenadiers advanced towards the town of Zandvoorde on 16 October, led by King’s Company and No 4 Company, under Major Colby. A strong defensive position was taken up, facing east, but with no sign of the Germans, three days later, the division was ordered to advance on Menin and Wervicq. Half of the Grenadiers advanced, but reports were then received that a large force of Germans had been spotted advancing from the direction of Courtrai, so the order was countermanded as the 7th Division was vastly outnumbered, and a defensive position was taken up again, with the division thinly stretched over a twenty-mile front.

The Germans attacked the 7th Division on 20 October, laying down a murderous barrage of shrapnel fire over their lines. During the afternoon the infantry attacked, thus beginning the First Battle of Ypres, and the division came under brutal attack. Heavy fighting continued during the afternoon, but the attacks died away. On the following afternoon, the Germans attacked again, but by now I Corps had begun to arrive and started its move towards the front, to the north of Ypres. By now, however, the troops of the 7th Division were fighting for their lives.

Sporadic attacks were beaten off during the coming days, and a violent attack was made towards Polygon Wood on 24 October 1914. The Wiltshires were overwhelmed and Polygon Wood fell to the Germans, who threatened to break through in between the Grenadiers and the Yorkshires. Major Colby, at the rear with the survivors of No 4 Company, was ordered to counter-attack, and by great determination managed to drive back the Germans and plug the hole in the line. It was a brave move, but proved very costly, as Major Colby and over a hundred of his men had been killed.

Lawrence was 34-years old when he was killed in action during the gallant counter-offensive of 24 October, 1914. His parents later received news of his death, and that he had been buried by his men, but Ypres was fought over heavily for almost four years, so all trace of his grave was lost. As a result, he is commemorated on the Ypres (Menin Gate) Memorial, Belgium. 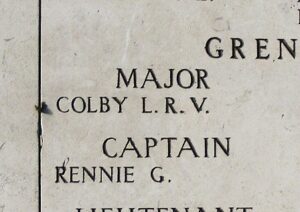 After Lawrence’s death his parents received several letters from comrades who were with him when he fell. One, dated Monday 26 October 1914, was from his valet:

I am just writing to tell you that in case you have not already heard, and as I promised you before we left, that you son Major L. V. Colby died from wounds received in action on the 24th October (Saturday).  The company in his charge were ordered to stop the Germans advance, as they had broken through on the left of our battalion’s trenches, and he took the company and 4 officers out and when they came upon the Germans, they were met with terrible fire from machine guns, rifles, and shrapnel shells, and as my master was advancing he was shot in the left leg and thigh.  I was not out with the Company but behind in the trenches with the kit, but as soon as I heard the Major was wounded, I got orders to go to the hospital with his things, and he was brought in and attended to and I stayed with him until he died on Sunday morning about 6 a.m.   I think that the medical officer did all he could, but he told me that he had lost too much blood and said he would not live many days, but the Major went into a sleep after being attended to as he had a fractured leg by 2 shots, 2 shots in the left thigh, he slept well never groaning although he was in pain, but the doctor injected morphia – I think that’s what the Major asked for to stop the pain – and all he wanted to know was if the Company had got in all right, and if the Company Sergeant-Major had been brought in yet, and then he went to sleep and I stayed in the hospital all night in case he wanted anything but he never spoke again.  He died as he was being carried from the first hospital in the firing line to the Headquarter hospital in the rear, as the Germans had been firing shells very near to the first hospital in the evening Saturday, but it was not hit, although some of the wounded were hit again through the shells.  I did not attend the burial as we had to dig hard making trenches, and I did not hear of it till afterwards, but he was buried about 1.30 p.m on Sunday afternoon and Captain Brooke attended in the field next to the farm that was the hospital, and a flagstone was put on the head to mark his resting place”.

“I must just write you a line to tell you how much I feel for you in the death of your son.  No one can feel it more than I do, as “Beef” was one of my greatest friends, and I shall miss him terribly.  I am afraid it is not much consolation to know that he died a gallant death, as that was only natural of him.  I buried him myself with the help of the men whose names I enclose in case you might like to know.  I did not see him before he died, but he looked quite peaceful, and as if he had suffered no pain.  The doctor said he did not suffer at all, which is some consolation.  I enclose a rough sketch of the spot where I buried him, which I hope you will understand.  I am afraid one could not do very much as shells were bursting all round, while I was burying him, and I put a plain wooden cross with L. V. C. on it at the head, and put a large flat stone on the top”.

Lawrence was very well known throughout west Wales. He is commemorated at Amroth; on a stained glass window in Carregwen Church; on war memorials at Crymych; Cilgerran; and at Manordeifi, Boncath; and by an oak lectern at Llandyry Church, near Trimsaran. He is also commemorated on the members war memorial at Lords Cricket Ground.

Known Servicemen from Bletherston Who Served