Begelly sits in the heart of Pembrokeshire, about four miles north of Tenby, on the A478 road to Narberth. The War Memorials to the men of the Parish who fell during both World Wars are located in the Parish Church, which is dedicated to St Mary, and cover the villages of Begelly and Kilgetty. 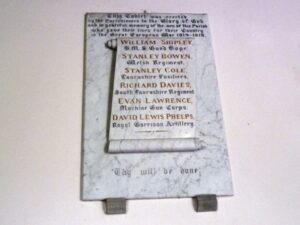 Stanley Bowen, Private, 56945, Cheshire Regiment. Stanley was born in 1898, the son of Elizabeth Bowen, of Fold Park, Begelly. He enlisted at Pembroke into the 1st Battalion, Training Reserve, Cheshire Regiment, before being posted to the 58th Battalion, Training Reserve, based at Kinmel Park. Stanley became ill and died at St. Asaph’s on 18 February 1917. He was 19 years old, and was brought home for burial at Begelly (St. Mary) Churchyard. 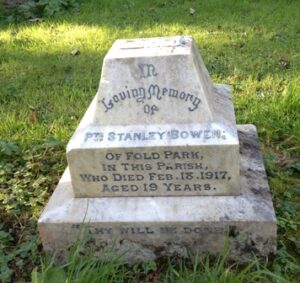 James Stanley Cole, Private, 282295, Lancashire Fusiliers. James was born in 1890, the son of Thomas and Edith Mary Cole, of Carne Mountain, Begelly. He resided at Burry Port prior to the war. James originally enlisted into the Pembroke Yeomanry, but was transferred to the 2nd/ 7th Battalion, Lancashire Fusiliers, which was attached to 197 Brigade, 66th Division. The Division concentrated on the Western Front by 16 March 1917 and moved to the Flanders Coast, preparing to launch an operation on the coast if the Passchendaele Offensive was successful. At the end of September 1917 the Division moved to Ypres, and took part in the Battle of Poelcapelle. James was killed in action here on 18 November 1917. He was 27 years old, and is buried at Dochy Farm New British Cemetery, Belgium. 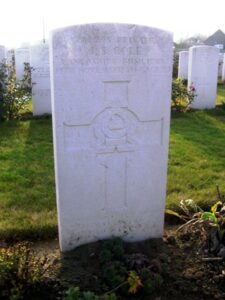 Richard Davies, Private, 34034, South Lancashire Regiment. Richard was born in Whitland, the son of Thomas and Julia Ellen Davies. The family were residing at Kilgetty Station by 1901, where Thomas was Station Master. By the outbreak of war the family were residing at The Post Office, Goodwick, and Richard enlisted at Fishguard on 12 June 1915 into the 7th Battalion, Welsh Regiment, with the service number 2405. On 26 July 1916 Richard was posted to France, joining the 7th Battalion, South Lancashire Regiment, which was attached to 56 Brigade, 19th (Western) Division. The Division had arrived in France in July 1915 and saw considerable action during the Battle of Loos, before moving to the Somme area, where it attacked and took the village of La Boiselle. After a brief rest period, during which time Richard joined the battalion, the Division took to the line again, fighting at the Battle of Pozieres. Towards the end of the Somme Offensive, the Division fought at the Battle of the Ancre, which is where Richard was Killed in Action on 14 November 1916. His body was lost in the terrible conditions in the Ancre valley, and he is remembered on the Thiepval Memorial, France. 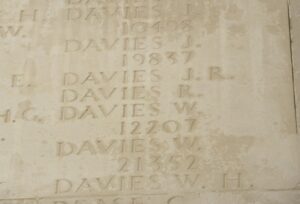 Harold Godwin Hurlow, Corporal, 45069, Welsh Regiment. Harold was the son of Benjamin and Sarah Hurlow, of Broadmoor, near Begelly. He worked as a miner prior to enlisting at Cardiff into the 2nd Battalion, Welsh Regiment. He was posted to France in the summer of 1916 to join the battalion, which was by then on the Somme attached to 3 Brigade, 1st Division. He would have taken part in the divisions actions on the Somme, during their epic fight at Munster Alley during the Battle of Pozieres and in the further fighting towards Morval. The division followed the German retreat to the Hindenburg Line in early 1917, and then moved to the Flanders Coast during the summer of 1917. While readying for the hoped breakthrough at Ypres, which did not occur, the coastal operation was cancelled and the 1st Division was moved to Ypres, taking part in the Second Battle of Passchendaele. The division wintered in Flanders and was near Estaires when the German’s launched their Lys Offensive and got caught up in heavy fighting before being moved to the Arras sector and from there took part in the great offensive, which was launched on 21 August 1918. Fighting at the Battle of Drocourt-Quéant, and at the Battle of Épehy the division took part in the advance towards the St. Quentin Canal. Harold was killed in action during the assault on the fortified village of Fresnoy le Petit on 22 September 1918, aged 35. He is buried in Marteville Communal Cemetery, Attilly, France. Harold is commemorated on his parents grave at Cold Inn, but does not appear to be commemorated on any local war memorial as far as I have seen.

William Jackson, Private, 20337, Connaught Rangers. William was born in Begelley, and enlisted at Carmarthen into the Pembroke Yeomanry. Some time later he transferred to the 3rd Battalion, Connaught Rangers, who were a Reserve Battalion. The Battalion had been stationed in Ireland for most of the war, and moved to Newcastle in November, 1917. They then moved to Dover in May, 1918 where they remained for the duration of the war. William died on 11 November 1918, the day the Armistice was signed, and is buried at Begelley (St. Mary) Churchyard. He is not commemorated at Begelley, but is commemorated at Saundersfoot. 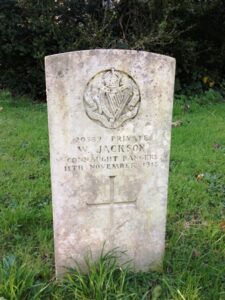 Evan Lawrence, Private, 85947, Machine Gun Corps. Evan was born in 1896, the son of William and Ellen Lawrence, of Langdon Bridge, Begelly. He enlisted at Pembroke on 10 December 1915 into the Welsh Regiment. Evan landed in France on 27 August 1917, and joined the 56th Company, Machine Gun Corps, which was attached to 56 Brigade, 19th (Western) Division. The Division was at Ypres, after having taken part in the Battle of Messines, and was about to launch an attack near the Menin Road. Evan was killed in action during his first major action, on 20 September 1917. He was 21 years old, and is buried at Oxford Road Cemetery, Belgium. 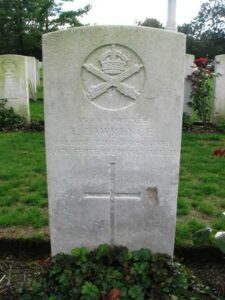 David Lewis Phelps, Gunner, 371351, Royal Garrison Artillery. David was born in 1892, the son of John and Ann Phelps, of Green Hill, Begelly. He enlisted into the Royal Artillery, and was posted to France with the 171st Siege Battery, Royal Garrison Artillery. The battery had formed at Pembroke Dock on 13 May 1916, before heading to France, and would have supported the Somme Offensive. During 1917 the battery moved to Ypres, where it supported the Allied assault on the Passchendaele Ridge. David was wounded at Ypres, and was evacuated to the Casualty Clearing Station at Dozinghem where he died of his wounds on 19 November 1917. David was 25 years old, and is buried at Dozinghem Military Cemetery, Belgium. 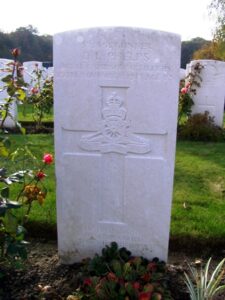 William Shipley, Stoker 1st Class, 309117, Royal Navy. William was born on 1 November 1885, the son of Thomas and Elizabeth Shipley, of Sutton-on-Trent, Newark, Notts. He served with the Royal Navy prior to the war, and was based at Pembroke, when he married Mary Davies at Manorbier in 1910. Mary later set up the family home at 67, High Street, Midsomer Norton, Bath. William served in the Royal Navy aboard H.M.S. Good Hope, an Armoured Cruiser. At the outbreak of war she joined the 6th Cruiser Squadron at Scapa Flow, but was then diverted to the South Atlantic. The Good Hope left Port Stanley, on the Falkland Isles, on 22 October, accompanied by HMS Monmouth, in search of the German East Adriatic Squadron, but was sank along with the Monmouth at the Battle of Coronel on 1 November 1914, going down with all hands, including William. He was 28 years old, and is remembered on the Portsmouth Naval Memorial, Hampshire.

Lewis Wilson, Captain, Essex Regiment. Lewis was born at Begelly on 4 March 1884, the son of William Phillips Wilson, and of Margaret Elizabeth Wilson (nee Lewis), of Langdon Farm, Begelly. Lewis emigrated to Canada prior to the war, after marrying Jessie Winifred Forrester on 7 June 1911. Lewis enlisted at Valcartier, Canada on 23 September 1914 into the 7th Battalion, Canadian Infantry. His next of kin was given as being his wife, who was living at Bank House, Milford Haven. Lewis was immediately promoted to Corporal, as he had six years prior service with the Kashar Light Horse. Upon arriving in France in 1915, Lewis was commissioned into the Essex Regiment, and was posted to 9th Battalion, Essex Regiment, which was attached to 35 Brigade, 12th (Eastern) Division. The Division landed at Boulogne on 31 May 1915, and took over the line at Ploegsteert Wood. They then moved south and fought in the Battle of Loos, and the subsequent actions of the Hohenzollern Redoubt, and remained there until March 1916. Lewis served as Adjutant from 15 July 1916. Sadly Lewis was wounded, and was evacuated to the 2nd London General Hospital, where he died on 27 November 1916. Lewis was buried at Kensal Green (All Souls) Cemetery, London. He is commemorated on a plaque within Begelly Church, but not on the main War Memorial. 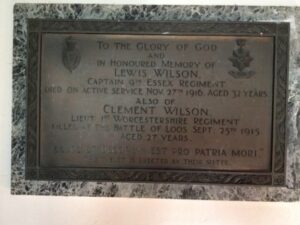 William Clement Wilson, Lieutenant, Worcestershire Regiment. William was born on 16 February 1887, the son of William Phillips Wilson, and of Margaret Elizabeth Wilson (nee Lewis), of Langdon Farm, Begelly. He was educated at Haverfordwest Grammar School. William enlisted into the 28th Battalion, London Regiment (Artists Rifles), and was commissioned on 3 March 1915 into the 1st Battalion, Worcestershire Regiment. The battalion was in France attached to 24 Brigade, 8th Division, after having landed at Le Havre on 6 November 1914. The Division saw its first major action at the Battle of Neuve Chapelle, and then at the Battle of Aubers. They then saw further fighting at the Action of Bois Grenier, during the opening of the Battle of Loos. On 25 September 1915 William was in charge of a Platoon of Grenadiers, which were sent in to support the assault on the German trenches. The Germans counter-attacked, and the last that was known of William is that he was caught up in a bomb blast. He is officially recorded as missing presumed killed here on 25 September 1915, aged 26. However a newspaper clipping of the time recorded that a German nurse had written to William’s parents, informing them that their son had been badly wounded and taken prisoner, and that he died in Hospital in Switzerland some time after. If true, then the official details of his death were never corrected, and so today William is commemorated on the Ploegsteert Memorial, Belgium. He is commemorated on a plaque within Begelly Church, but not on the main War Memorial. 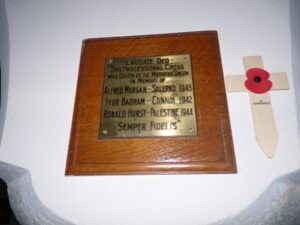 Ivor George Badham, Aircraftman 2nd Class, 1279531, Royal Air Force Volunteer Reserve. Ivor was born in 1917, the son of William and Annie Badham, of Kilgetty and served in the Royal Air Force Volunteer Reserve as an Aircraftman. Ivor was sent to Canada to train, in a scheme that was known as the British Commonwealth Air Training Plan, and was attached to No 36 O.T.U. Very little is known of his service, but he died in hospital at Annapolis, Nova Scotia on 21 May 1942, after falling into a diabetic coma. Ivor was 24 years old, and is buried at Middleton Holy Trinity Old Cemetery, Canada. There is also a separate plaque in his memory within the church. 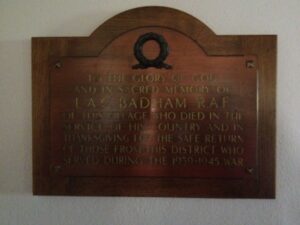 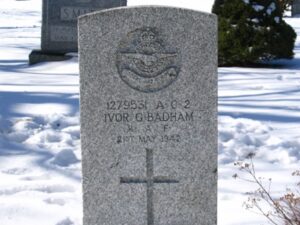 Ronald James Hurst, Sergeant, 1411208, Royal Air Force Volunteer Reserve. Ronald was born in 1921, the son of Henry James Hurst and Martha Jane Hurst, of Kilgetty. He served during the war with the Royal Air Force, based in Israel. Little else is presently known of Ronald, but he died in Israel on 1 October 1944, aged 22, and is buried at Ramleh War Cemetery, Israel. 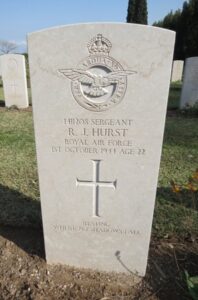 Alfred George Morgan, Private, 39762313, The Sherwood Foresters (Nottinghamshire And Derbyshire Regt). Alfred was born in 1921, the son of James Fyers Morgan and Gertrude Harriet Morgan, of Begelly. He served with the 5th Battalion, Sherwood Foresters. In January 1943 the 5th Battalion joined the 1st Army in Tunisia, and took part in heavy fighting during the North African campaign. The battalion landed at Salerno in September 1943, suffering heavy casualties during the advance up to the Cassino area. Alfred was killed in action here on 24 September 1943. He was 22 years old, and is buried at Salerno War Cemetery, Italy.