Llowes is a village and parish situated just two and a half miles west of Hay-on-Wye, in the county of Radnorshire, on the River Wye. The Parish Church is dedicated to St. Meilig, and contains two war memorials, one which commemorates the two men of the village who fell during the Great War, and another which commemorates the one man of the village who fell in the Second World War.

Albert Appleyard, Private, 200511, South Wales. Albert was the son of Joseph Appleyard and Ann Appleyard (nee Jukes), of Alnwick, Northumberland. He came to Llowes by 1911 to work as a gamekeeper, following in his father’s profession. He enlisted at Brecon into the Brecknock Battalion, South Wales Borderers. The battalion was a Territorial Army unit, and mobilised for war at Brecon in August 1914, as part of South Wales Brigade, Welsh Division (Later the 53rd (Welsh) Division). On 29 October 1914 the battalion left the Brigade and sailed from Southampton aboard the SS Dilwara with the Home Counties Division, arriving at Bombay. On 3 December 1914 the battalion moved to Aden, arriving 16 December 1914 and came under orders of the Aden Brigade. The battalion suffered in the terrible climate of Aden, with many men becoming ill and losing their lives from heatstroke, sickness and disease, before the battalion left for Bombay in August 1915, joining the Mhow Brigade in the 5th (Mhow) Division, and remained in India throughout the war. Albert died of influenza at Mhow on 29 October 1918, aged 27. He was buried in Mhow New Cemetery, India.

Henry John Davies, Private, 2924, Cheshire Regiment. Henry was the son of William Davies and Ann Davies (nee Pritchard), of Llowes Mill, Llowes. He was a farm worker prior to the war. Henry enlisted into the Shropshire Yeomanry at Glasbury. The battalion mobilised for war at Oswestry in August 1914, then moved to Flixton in Suffolk to join the 1st Mounted Division. The regiment was then dismounted, upon converting to infantry and on 4 March 1916 embarked at Devonport for Egypt aboard the SS Arcadian. Henry remained in England with the 3/1st Shropshire Yeomanry, and was posted to France later in the war, joining the 10th Battalion, Cheshire Regiment, which was attached to 7 Brigade, 25th Division. The Division saw heavy fighting on the Somme in 1916, and then moved to Ploegsteert, where they held the line for the months leading up the Battle of Messines in June 1917. After fighting at Messines, the Division fought during the early stages of the Passchendaele offensive, before being transferred south where they took up positions around Bullecourt in reserve. Here the Division was used to reinforce the badly depleted British units that were hit in the area by the German Spring Offensive of 21 March 1918. The Division was then moved north to Flanders on the night of 30 March, taking up positions at Ploegsteert, but on 9 April the Germans launched an offensive on the Lys, and the Division was caught up in the terrible fighting which followed. On 9 May the battered division was transferred to the Aisne sector to rest, but became caught up in the third, and final, phase of the German offensive there on 27 May, and was virtually annihilated. The survivors of the Division were posted to other units, so Henry joined one of the other infantry units in France. Henry was killed in action three days into the launching of the great Allied offensive, on 24 August 1918, aged 23. He is buried in Blighty Valley Cemetery, Authuile Wood, France. His unit at the time is presently unknown, as all records show Shropshire Yeomanry or 10th Cheshire’s.

Arthur Samuel Price, Lance Corporal, 2735481, Welsh Guards. Arthur was born in Glasbury in 1919, the son of Thomas James Price and Annie Price. He married Enid Dorothy Veale, of Knowle, Bristol, in 1943. Arthur had enlisted into the 1st Battalion, Welsh Guards. The battalion had seen heavy fighting in France in 1940, and spent the next four years on home service. In June 1944 the 1st Welsh Guards returned to France, attached to the Guards Armoured Brigade, and spent most of the month in positions near Cheux. From 17 July the Guards Armoured Division took part in a large operation to break out of Normandy, fighting around Caen. Arthur was killed in Normandy on 12 August 1944, aged 25. He is buried in Banneville-La-Campagne War Cemetery, France. 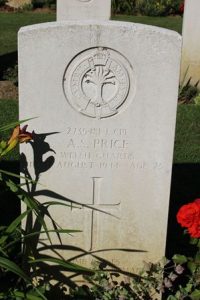