Llansantffraed-in-Elwel, or just Llansantffraed, is a small village situated in the historic county of Radnorshire, about a mile west of the village of Hundred House, just off the A481 road from Builth Wells to Llanfihangel-nant-Melan. Within the village sits St. Bridget’s Church, which lies on an ancient site, and inside is a simple wooden war memorial, which commemorated the men of the Parish of Llansantffraed-in-Elwel and the neighbouring Parish of Betws Disserth who served in the Great War. As well as those who served, the memorial also commemorates the one man of the Parish who was killed in action, one who died of wounds, and three who died whilst in training camps.

David Milwyn Jones, Private, 238871, Herefordshire Regiment. David was the son of William and Harriet Jones, of Hirllwyn, Hundred House. He enlisted at Builth into the Herefordshire Regiment and was posted to the 2/1st Battalion, Herefordshire Regiment, which was billeted at Oswestry. David did not serve overseas, but took ill and died of pneumonia at Gobowen on 27 February 1917, aged 23. He is buried in Hephzibah Baptist Burial Ground, Glascwm.

James Matthews, Private, 33228, King’s Shropshire Light Infantry. James was the son of James and Eliza Matthews, of Tyngreen Farm, Llansantffraed-in-Elwell. He worked as a waggoner on a farm prior to the war and married Lilian Hills at Llandeilo in 1915. James enlisted at Builth Wells into the 3rd Battalion, King’s Shropshire Light Infantry, and was posted to Pembroke Dock for training with the battalion, which formed part of the garrison for the RN Dockyard. James took ill prior to embarking for France, and died of meningitis at Pembroke Dock Military Hospital on 14 June 1917, aged 37. His remains were brought home for burial in St. Bridget’s Churchyard, Llansantffraed-In-Elwell. 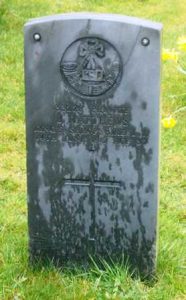 William John Morson, Private, 266784, Monmouthshire Regiment. William was the son of William and Mary Ann Morson, of Brynsella, Hundred House. He worked on his father’s farm prior to the war. William was called up into the army on 8 June 1916, and travelled to Shrewsbury to attest, before being sent to Pontypool, and enlisted into the 2nd (Reserve) Battalion, Monmouthshire Regiment at Pontypool on 11 June. William embarked for France on 9 February 1917, joining the 1/2nd Battalion, Monmouthshire Regiment, which by then had become the Pioneer Battalion to the 29th Division. William joined the battalion in the Somme sector, having advanced towards Sailly-Saillisel, and was following up the German withdrawal to the Hindenburg Line. The Monmouths had been very busy during this period, consolidating captured German trenches and digging new ones as the British pressed forwards. At the beginning of March the 29th Division was relieved from the Somme, and moved to the Arras sector, and took part in a famous assault on the German held village of Monchy-le-Preux, during the Battle of Arras. After moving from the Arras sector in the middle of June 1917, the Division moved to the Ypres Salient and relieved the 38th (Welsh) Division so that it could train in preparation for the forthcoming Third Battle of Ypres. On 12 July 1917 the Monmouths were at work improving trenches and building causeways for the forthcoming offensive, when William and another man were killed by artillery fire. William was 29 years old when he was killed that day and is buried in Bard Cottage Cemetery, Belgium.

William Ernest Lloyd Price, Private, 63499, Machine Gun Corps. Ernest was the son of Lloyd and Mary Price, of Tyngwyn, Glascomb, Hundred House, Builth Wells, Breconshire. He enlisted into the army and was posted to the 59th Battalion, Machine Gun Corps. The battalion was attached to the 59th Division, and had moved to France from Ireland in February 1917, and upon moving into the front followed the German withdrawal to the Hindenburg Line. The Division moved to Ypres later that year and took part in the Battle of the Menin Road and the Battle of Polygon Wood, before moving to the Cambrai sector, taking part in the Battle of Cambrai later that year. The Division was caught up in the desperate fighting which followed the German Spring offensive of 21 March 1918, before being transferred north to rest, but became caught up in more heavy fighting during the second phase of the German offensive, on the Lys, from 9 April. The Division was almost annihilated during these periods and went into the rear areas until taking part in the great offensive from 21 August 1918 onwards. William had been wounded and taken prisoner at some time during these Spring offensives, and was in a desperate state when the Armistice was signed and he returned to Britain. He eventually died as a result of his wounds at the Prince Christian Hospital, Winslow Road, Withington, Manchester on 4 December 1919, aged 24. His remains were brought home for burial in St. Bridget’s Churchyard, Llansantfraed-in-Elwell.

Thomas Drew Sheen, Gunner, 220514, Royal Field Artillery. Thomas was the son of Thomas Richard Sheen and Harriett Margaret Sheen, of Carneddau, Llansantffraed. He worked as a cow man prior to the war, and as a farm worker appealed against conscription in September 1916, being given three months exemption from service. At the end of this exemption period, Thomas enlisted into the Royal Field Artillery at Builth Wells in January 1917, and was posted to the 2nd Reserve Brigade, RFA at Prees Heath for training. Sadly he became ill and died at Prees Heath Military Hospital on 5 March 1917, aged 23. His remains were brought home for burial in St. Bridget’s Churchyard, Llansantffraed-in-Elwell.

The parochial roll of honour contains the following names: