Glascwm is a community in the upper Edw valley in Radnorshire, near the village of Hundred House, which lies on the A481 road. The nine men of the community who served during the Great War, and a further two men who fell, are commemorated on a wooden war memorial located inside St. David’s Church. Next to the memorial is a framed paper memorial to those who served during WW2. The Church also contains a WW2 grave marker to two German airmen who crashed locally during WW2 and were originally buried in the Churchyard. There is also a war grave in Hephzibah Chapel Cemetery in the village.

William Ernest Lloyd Price, Private, 63499, Machine Gun Corps. Ernest wwas the son of Lloyd and Mary Price, of Tyngwyn, Glascomb, Hundred House, Builth Wells, Breconshire. He enlisted into the army and was posted to the 59th Battalion, Machine Gun Corps. The battalion was attached to the 59th Division, and had moved to France from Ireland in February 1917, and upon moving into the front followed the German withdrawal to the Hindenburg Line. The Division moved to Ypres later that year and took part in the Battle of the Menin Road and the Battle of Polygon Wood, before moving to the Cambrai sector, taking part in the Battle of Cambrai later that year. The Division was caught up in the desperate fighting which followed the German Spring offensive of 21 March 1918, before being transferred north to rest, but became caught up in more heavy fighting during the second phase of the German offensive, on the Lys, from 9 April. The Division was almost annihilated during these periods and went into the rear areas until taking part in the great offensive from 21 August 1918 onwards. William had been wounded and taken prisoner at some time during these Spring offensives, and was in a desperate state when the Armistice was signed and he returned to Britain. He eventually died as a result of his wounds at the Prince Christian Hospital, Winslow Road, Withington, Manchester on 4 December 1919, aged 24. His remains were brought home for burial in St. Bridget’s Churchyard, Llansantfraed-in-Elwell.

Alfred Davies Bufton, Private, 51657, Cheshire Regiment. Alfred was the son of Samuel and Mary Jane Bufton, of Penbont, Hundred House. He married Elizabeth Hammonds, of Llwynpince, Hundred House, on 18 October 1916.Alfred worked as a carpenter and wheelwright prior to enlisting at Knighton into the 5th Battalion, King’s Shropshire Light Infantry on 14 May 1917. On 19 October 1917 Alfred embarked at Southampton and landed in Rouen on 23 October, before being posted to the 15th Battalion, Cheshire Regiment. The battalion was attached to 105 Brigade, 35th Division and was taking part in the Second Battle of Passchendaele. During March 1918 the division had moved back to the Somme, and fought at the First Battle of Bapaume, during the German Offensive, which had been launched on 21 March 1918. By 24 March the 15th Cheshire’s were at Maricourt and received orders to move forward to support the troops in the front, but almost immediately came into contact with advance parties of Germans. Heavy fighting continued over the next few days until the battalion was relieved on the 31st. Alfred was among 400 casualties suffered by the battalion, being posted as killed in action on 27 March 1918, aged 23. He has no known grave and is commemorated on the Pozieres Memorial, France. 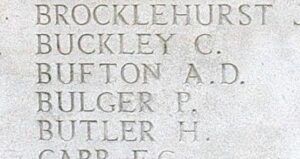 Not Commemorated at Glascwm

John Samuel Meredith, Private, 238902, King’s Shropshire Light Infantry. John was the son of Samuel Meredith, of Chapel Farm, Whitney-on-Wye. He worked on his father’s farm prior to enlisting at Glasbury into the Herefordshire Regiment. He was posted to France at some time after 1916, joining the 1st Battalion, King’s Shropshire Light Infantry, which was attached to 16 Brigade, 6th Division. The division took part in the Battle of Hill 70 in the spring of 1917, and then during the Battle of Cambrai later in the year. In the spring of 1918, the Division was one of those hit by the German Offensive on the Somme, which had been launched on 21 March, and took part in the Battle of St Quentin. It was moved from the line to Flanders to rest, but the following month the Germans launched another offensive on the Lys, and the Division saw more heavy fighting from 9 April onwards. During August 1918 the Allies had recovered sufficiently to be able to launch their own attacks on the Germans, and after a brilliant victory at Villers Brettoneux on 8 August, attacks were launched at Albert. The 6th Division, still in Flanders, was in the Dickebusch sector at the time, working in conjunction with the 106th American Infantry. On 13 August 1918 the 1st KSLI had just relieved the Americans when the Germans attacked one of their posts, capturing it before hurling a barrage of machine gun and artillery fire onto the front-line trenches. John was among a number of men killed during the attack. He was 25 years old and is buried in La Clytte Military Cemetery, Belgium. He is commemorated on the Clyro War Memorial. 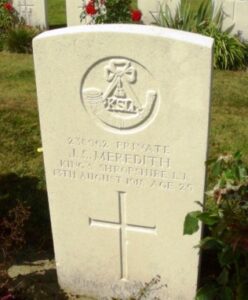 David Milwyn Jones, Private, 238871, Herefordshire Regiment. David was the son of William and Harriet Jones, of Hirllwyn Hundred House Builth Wells. He enlisted at Builth into the Herefordshire Regiment and was posted to the 2/1st Battalion, Herefordshire Regiment, which was billeted at Oswestry. David did not serve overseas, but took ill and died of pneumonia at Gobowen on 27 February 1917, aged 23. He is buried in Hephzibah Baptist Burial Ground, Glascwm. He is commemorated on the Llansanffraed War Memorial.

Inside the church is the original wooden grave marker to two German airmen killed on the night of 25/26 April 1942 when their Junkers Ju 88 bomber was shot down by an RAF fighter and crashed on Gwaenceste Hill. The two men were buried in the Churchyard, but after the war all German military burials around the country were exhumed and concentrated into Cannock Chase German Military Cemetery, Staffordshire.

On the night of 25 April 1942, their Junkers Ju.88, of Kampfgeschwader 3, had been taking part in a bombing raid on Bath, when it came under fire from Anti-Aircraft guns near Cardiff and became lost. The Germans flew over Chepstow and up the Wye Valley, before being intercepted by Flying Officer Hugh Graham Stanhope Wyrill and Sergeant John Willins, flying Beaufighter X7933 from RAF High Ercall. Outmatched, the Ju-88 was attacked and hit. While the stricken aircraft was coming down, two of her crew managed to bale out, but two other men were killed when the aircraft hit the ground and exploded on Gwaunceste Hill near Glascwm. The two survivors, who were captured and taken prisoner, were Oberfeldwebel Walter Kreinenbrock, the navigator, and Obergefreiter Paul Kochon, the wireless operator. The pilot Oberleutnant Guenter Brixius and the gunner, Feldwebel Adolf Leibig, were killed. 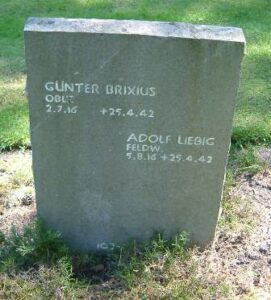 Both men now lie beside each other in Cannock Chase German Military Cemetery. 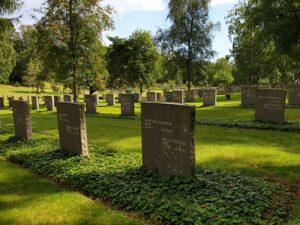