Boughrood is a village in the historic county of Radnorshire, in the community of Glasbury, and is situated to the east of the River Wye between Hay-on-Wye and Builth Wells. A bridge connects Boughrood to Llyswen, a small village south of the river. The village’s church, St Cynog’s, was built in 1854 on the site of a medieval graveyard. In 2004 the church had a new spire built, to replace one that was declared unsafe and demolished in the 1970s. Within the church is a simple brass memorial plaque, which commemorates its two parishioners who fell during the Great War. 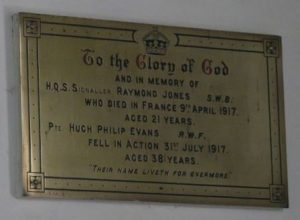 Hugh Phillip Evans, Private, 235410, Royal Welsh Fusiliers. Hugh was the son of Hugh and Ann Evans, of Machynlleth. Hugh left Machynlleth after gaining a post as Stationmaster at Boughrood, Radnorshire for the Cambrian Railways. He married Violet Roselle Stephens, a school mistress from Penally, there on 19 January 1908 and the couple had a son, Philip, born on 2 April 1908. Hugh enlisted into the Brecknockshire Battalion, South Wales Borderers on 2 September 1914 and was posted to Pembroke Dock with the battalion. When the front-line battalion embarked for overseas, Hugh initially remained in Pembrokeshire with the 3/1st Brecknock’s. On 16 June 1917 he embarked for France and was posted to the 14th Battalion, Royal Welsh Fusiliers, which was at Ypres attached to 113 Brigade, 38th (Welsh) Division. Hugh joined the battalion behind the lines on 8 July, while it was training in preparation for an assault by the 38th Division on the Pilckem Ridge. On 31 July 1917 the Division launched its famous assault on the Pilckem Ridge, capturing Iron Cross and reaching its objective of the Steenbeek, then played a supporting role in the Battle of Langemarck. Hugh was killed in action whilst the 14th RWF was holding the newly captured line near the Steenbeek on 4 August 1917, just prior to the battalion being relieved. The 39-year-old has no known grave and is commemorated on the Ypres (Menin Gate) Memorial, Belgium. 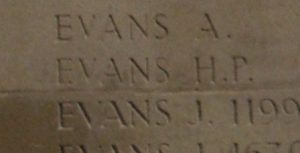 Raymond Jones, Private, 22401, South Wales Borderers. Raymond was born in 1896, the son of Enoch Jones and Annie Jones (nee Rouse), of Wernycwm, Boughrood. He was working for Tom and Mary Brewin at Modrydd Farm, Libanus, Brecon by 1911, by which time his parents had moved to Church House, Boughrood. Raymond enlisted at Talgarth into the 11th Battalion, South Wales Borderers soon after the outbreak of war. The battalion was at Colwyn Bay attached to the 43rd (Welsh) Division. The Division trained in North Wales before moving to Winchester in the summer of 1915, where the formation became renumbered 115 Brigade, 38th (Welsh) Division. The Division began moving to France on 2 December 1915 and moved to the Nursery Sector near Fleurbaix for trench initiation alongside the Guards Division. The Division then held a sector of the line near Cuinchy before marching south to the Somme sector in June 1916 to take part in the assault on Mametz Wood. The first attack on the wood was launched on a two-battalion front on 7 July, but failed, and the Divisional Commander, Sir Ivor Philipps, was replaced before the Division attacked again on a two Brigade front on 10 July 1916. After two days of ferocious hand-to-hand fighting, the wood was cleared up to its northern edge, before the battered Division was relieved. It then took over a section of the front at Hébuterne before moving to the Ypres Salient and taking over the Canal Bank sector at Boesinghe. The infantry battalions of the Division then began carrying out the normal pattern of rotation in the trenches, four days in the front, four in support and four in reserve, whilst also working on trench improvement, digging new trenches, and carrying out regular patrols and trench raids. Raymond took ill during the spring of 1917 and died of disease on 9 April 1917. The 21-year-old was buried in Mendinghem Military Cemetery, Belgium. He had an illegitimate child with Gertie Bevan of Talgarth.

Percy Price, Private, 2211, Australian Infantry. Percy was born on 1 August 1894, the son of John Price and Eleanor Price (nee Thomas), of Talgarth. His father had died by 1901, by which time the family was residing at 14, Bryn Terrace, Ystradfodwg. His mother remarried to William Henry Saunders, before the entire family emigrated to Australia, embarking aboard the SS Omrah on 19 February 1909, and upon their arrival made their home at Penong, South Australia. Percy worked as a farmer prior to enlisting at Keswick into the 10th Battalion, Australian Infantry on 2 March 1915, and joined the 6th reinforcement draft for the battalion, which embarked from Adelaide for Egypt aboard HMAT Borda on 23 June 1915. Upon arriving at Alexandria, the men were transferred aboard HMT Berrime and on 4 August 1915 disembarked at Anzac Cove, Gallipoli. Percy’s battalion was preparing to take part in a forthcoming offensive, which was intended to draw Turkish attention away from further Allied Landings at Helles. On 6 August 1915, whilst preparing for the attack, and just two days after arriving at the front, Percy was killed when the Turks launched an intensive artillery barrage upon their positions at Leane’s Trench. The 20-year-old is buried in Lone Pine Cemetery, Anzac, Gallipoli. Percy is not commemorated locally.