Pool Quay is a small village in Montgomeryshire, situated on the A483 road, between the towns of Welshpool and Oswestry on the banks of the River Severn. The Offa’s Dyke Path also passes through the village following the towpath of the Montgomeryshire canal. The village took its name from being the highest navigable point on the River Severn, near to the village of Pool, so was the Quay for Pool, later Welshpool. To the north, along the A483, lies the village of Arddleen. The men of both villages who fell during both World Wars are commemorated on the Pool Quay and Arddleen War Memorial, which is located in the grounds of St John the Evangelist Church, in Pool Quay. The memorial takes the form of a Celtic Cross, which stands on a stone plinth bearing the names of the fallen. 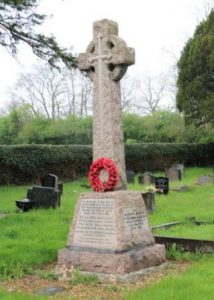 Edward Charles Davies, Stoker 2nd Class, K/44250, Royal Navy. Edward was born on 15 June 1899, the son of John and Ann Davies, of Sarnau, Llanymynech. He worked as a Cycle Repairer prior to enlisting into the Royal Navy on 19 July 1917, and was posted to HMS Vivid I at Portsmouth for training. Edward had been in uniform for little over a month before he took ill, and died of typhoid fever in hospital at Plymouth on 14 September 1917. The 18-year-old was buried in Ford Park Cemetery, Plymouth. His parents later resided at Perthy Cottage, Arddleen. Edward is not commemorated on the Pool Quay and Arddleen war memorial. 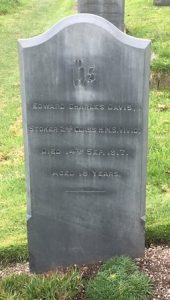 George Birch Green, Second Lieutenant, King’s Shropshire Light Infantry. George was born on 30 March 1896, the son of Thomas and Mary Jane Green, of The Bank, Pool Quay. He enlisted into the Montgomeryshire Yeomanry soon after the outbreak of war. After completing his training, George was drafted to France on 18 December 1916, joining the 4th Battalion, Royal Welsh Fusiliers, which by then was the Pioneer Battalion to the 47th (2nd London) Division. He joined the battalion at the Pioneer Camp at Dickebusch on 25 December, on a rare day when the battalion was given a day off to celebrate Christmas. On the following day the battalion resumed its work, with its Companies split up laying light railways at The Bluff, Railway Dugouts and at Zillebeke. Over the coming months the battalion worked hard, expanding its work into other sections of the Ypres front, preparing the ground for the launching of the Passchendaele offensive, which was due to be launched on 31 July 1917. In the meantime, George must have shown promising leadership qualities, as by June he had been sent home for Officer Cadet training at Kinmel Park. On 28 November 1917 George was commissioned as Second Lieutenant into the Royal Welsh Fusiliers, and returned to France. He is shown as having been posted to the 1st Battalion, Royal Welsh Fusiliers, but by then the battalion had moved to Italy with the 7th Division, so he was possibly attached to another battalion. During May 1918, George was attached to the 7th Battalion, King’s Shropshire Light Infantry, which was in Flanders attached to 8 Brigade, 3rd Division. On 1 June 1918 the 7th KSLI moved into the support trenches at Locon, to begin a routine tour in the trenches. George was killed by a shell whilst the 7th KSLI was in the process of being relieved from the line at Locon on 11 June 1918. The 21-year-old was buried in Sandpits British Cemetery, Fouquereuil, France. There is also a memorial plaque dedicated to George situated within St. John the Evangelist Church, at Pool Green.

Richard Herbert Higgins, Chief Engineer, Mercantile Marine. Richard was the son of John and Mary Elizabeth Higgins, of Maesgwyn. He went to sea as a young man, to train as a Marine Engineer, and later lived at Bryn-Morwel, Somerset Road, Barry, where he married Sarah Margaret Thomas in 1912. Richard served as Chief Engineer aboard the Elders and Fyffes owned refrigerated cargo steamer, SS Zent. At the beginning of April 1916, Zent set off from Garston to Colombia. During the morning of 5 April 1916, she was steaming off the southern coast of Ireland when she was torpedoed without warning by the German submarine U-66, and sank quickly with the loss of 49 lives. The ship sank so quickly that her two lifeboats were taken down with her, but one popped up, upside down, allowing ten survivors to cling onto it, before being rescued. Richard was mong the men drowned when Zent sank that day. The 36-year-old has no known grave and is commemorated on the Tower Hill Memorial, London.

Charles Edward Jones, Private, 36551, Royal Welsh Fusiliers. Charles was born on 30 July 1897, the son of Edward and Mary Jane Jones, of Abbey Cottage, Pool Quay. He worked as a labourer prior to enlisting into the Royal Welsh Fusiliers at Welshpool on 4 November 1915, and was posted to Wrexham Barracks, before being sent to Litherland Camp, Liverpool for training. On 15 March 1916 Charles embarked for France, and was posted to the 1st Battalion, Royal Welsh Fusiliers, which was attached to 22 Brigade, 7th Division, joining the battalion at Morlancourt on 26 March. The battalion was home to a number of famous war poets, including Siegfried Sassoon, Bernard Adams and Robert Graves, and was highly regarded. The Division was holding a sector of the front line facing Fricourt, to the east of Albert, in positions which were hard fought over.  Charles arrived as the 1st RWF were moving back into the front-line to begin a routine tour. On 31 March the Germans exploded two mines in front of the battalion, collapsing 50 yards of trenches, and a section of barbed wire defences fell into the resulting craters. On the following day the battalion was relieved, and marched back to Morlancourt, before moving back into the front line by 7 April to begin another tour. This pattern continued in the coming weeks, as the Allies prepared to launch the Somme offensive, and the 1st RWF kept themselves busy in and out of the line, training, supplying working parties and carrying out numerous trench-raids. The Battle of the Somme was due to be launched by the blowing of a series of underground mines, and a mass infantry assault on 1 July, so two days prior to this, the 1st RWF moved forwards in support of the 20th Manchester’s, who were to lead the Divisions assault on Fricourt. Charles was killed during the period leading up to the assault, on 29 June 1916. The 18-year-old has non known grave and is commemorated on the Thiepval Memorial, France.

Vaughan Larter, Private, 46034, Cheshire Regiment. Vaughan was born in Hargham, Norfolk in 1883, the son of George and Charlotte Larter. The family had moved to Cleobury Mortimer, Shropshire by 1895, as George had gained a position as Head Gamekeeper on an estate there. Vaughan followed in his father’s profession, and by 1907 had gained a position as Gamekeeper at Bobbington, Staffordshire, marrying Clara Malpas there on 19 June 1907. By 1911 he had gained a position as Head Gamekeeper on an estate in Staffordshire, and the couple had set up home at Harrison Farm, near Preston. Soon afterwards, Vaughan gained another position as Gamekeeper at Pool Quay, and moved to The Rhallt with his family. He enlisted into the Cheshire Regiment at Welshpool on 7 December 1915, and was placed on the Army Reserve. On 16 June 1916 Vaughan was mobilised, and was posted to the 17th (Reserve) Battalion, Cheshire Regiment at Prees Heath, for training. He was then posted to the 20th Battalion, Cheshire Regiment, which was a Labour Battalion, and embarked for France with the battalion on 21 July 1916. The battalion then moved to the Somme, where it began work. Vaughan’s service papers show a record of ill-health, which is probably why he had been posted to a labour unit, not the infantry, and he was hospitalised during several occasions from October 1916. The battalion spent the winter in the Becourt Sector, working on roads and railways. On 10 February Vaughan was evacuated to the 29th Casualty Clearing Station, Gézaincourt, where he died of nephritis on 12 February 1917. The 33-year-old is buried in Gézaincourt Communal Cemetery Extension, France.

John Edward Middleton, Private, 93511, Royal Welsh Fusiliers. John was born on 18 January 1900, the son of Edwin and Fanny Middleton, of Rose Cottage, Wern, Pool Quay. He enlisted into the Training Reserve at Wrexham, and was posted to Kinmel Park for training. John was drafted out to France in the summer of 1918, joining the 13th Battalion, Royal Welsh Fusiliers, which was attached to 113 Brigade, 38th (Welsh) Division. The Division had seen heavy fighting at Ypres during the Passchendaele offensive the previous year, before being transferred to the Sailly-sur-la-Lys sector in September, and remained in the area over the winter before being moved to positions north of Albert, at Bouzincourt Ridge, at the end of March 1918, relieving the battered 2nd and 47th Divisions. It held this sector, carrying out minor operations and trench raids, over the coming months, before taking part in the great offensive of 21 August 1918, and began its advance towards the Hindenburg Line. The initial assault, across the flooded Ancre Valley at Aveluy Wood, was made by 114 Brigade, who captured Thiepval Ridge. On 23 August, 113 Brigade joined the assault, and the 13th RWF moved through Albert in the morning, and launched their assault from Crucifix Corner, Aveluy, towards the Albert to Bapaume Road. Over the coming days the Division captured Pozieres, before recapturing Mametz Wood, and drove on, capturing Bazentin, Longueval and Delville Wood, all famous battlefields from the old Somme offensive in 1916. On 1 September the Division captured Sailly-Saillisel, and on 5 September the 13th RWF moved to bivouacs NW of Ginchy to rest and refit. John had been wounded just before the relief, and was evacuated to the 34th Casualty Clearing Station at Fienvillers, where he died of his wounds on 10 September 1918. The 18-year-old is buried in Fienvillers British Cemetery, France.

Reece Cadwalader Thomas, Fusilier, 4194452, Royal Welch Fusiliers. Reece was born on 7 October 1919, the son of Edward Alfred Thomas and Margaret Jane Thomas (nee Roberts), of Laurels, Pool Quay. He enlisted into the 7th Battalion, Royal Welch Fusiliers, which was attached to 158 Brigade, 53rd (Welsh) Division. The battalion was mobilised at the outbreak of war, when the Division moved to Northern Ireland to begin garrison duties. The Division then moved to Pembroke Dock, before moving again to the south of England, where it trained in readiness for the D-Day Landings. On 24 June 1944 the 7th RWF left England for Normandy, and landed at La Riviere near Ver Sur Mer. The Division then took part in heavy fighting over the coming weeks, as part of the effort to break-out of the Normandy beach-head, seeing heavy fighting at Évrecy, before starting the epic advance through Northern France into Belgium and Holland. On 15 September the Division forced the crossing of the Junction Canal North of Lommel, and continued to push westwards towards Elst, between Nijmegen and Arnhem, during Operation Market Garden. On 22 October the Division launched its famous assault on ‘s-Hertogenbosch, before continuing its advance to the German frontier. Between December 1944 and January 1945, the Division took part in the Battle of the Bulge, helping in the counter-attack which helped save the Americans, who were under heavy pressure, then after the German offensive was broken, took part in heavy fighting to enter the Rhineland. On 1 April, 158 Brigade passed through the village of Alstatte, and during the night received orders to continue the attack the following morning. At 8.30 on 2 April 1945, the 7th RWF (in Troop Carrying Transport), were directed to cross the Epe bridge and advance along the main East-West Road leading to Ochtrup-Rethenberg-Wettringen and Rheine. After minor delays due to enemy action just East of Epe, and to the North-East where the bridge over the Goor stream had been blown, the leading troops were held up at a strong road block about two miles West of Ochtrup, and the battalion launched a pincer movement upon the Germans. Reece was killed in action during the fighting that day. The 25-year-old was originally buried in Ochtrup, alongside three of his comrades, but in June 1947 their graves were exhumed, and the four men were re-interred in Reichswald Forest War Cemetery, Germany. 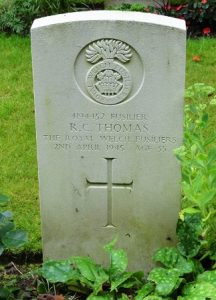