Penegoes is a small village in Montgomeryshire, situated on the A489 road between Cemmaes Road and Machynlleth. Situated alongside the road in the village is a war memorial, which takes the form of a Celtic cross. The memorial reportedly contains the names of the men of the village who fell during both World Wars, but I have only got a list of the fallen of the Great War and have no photograph of the memorial to refer to.

Thomas Owen Davies, Lance Corporal, 428278, Canadian Infantry. Thomas was born on 14 February 1893, the son of Owen Davies and Mary Ann Davies (née Hurley), of Garden Village, Machynlleth. The family later resided at 55, Bridge Street, Aberystwyth, while Thomas migrated to Canada at some time after 1911. He enlisted at New Westminster, British Columbia on 7 April 1915 into the 7th Battalion, Canadian Infantry. He sailed for England with his battalion on 13 November 1915 and after training on Salisbury Plain the Canadians moved to France. Thomas served at Ypres and on the Somme with the battalion before his health began to fail and he was transferred to the Canadian Forestry Corps in February 1918. He was later found to have contracted tuberculosis and returned to Canada for treatment before returning to Wales after the war. Thomas died at Machynlleth on 1 March 1921, aged 29 and was buried in Penegoes Churchyard, Machynlleth. His case was submitted to the CWGC on 5 December 2016, and he was accepted for commemoration on Tuesday 20 December 2016. He was reported to have been awarded the Distinguished Conduct Medal for his gallantry during a German gas attack at Ypres on 3 June 1916, for bringing in wounded men whilst under heavy rifle and machine-gun fire, but the award cannot be traced. Thomas is not commemorated on the Penegoes war memorial.

Thomas Evans, Private, F/2740, Middlesex Regiment. Thomas was the son of Edward Evans and Mary Evans (nee Hughes), of Commins Coch, Cemmaes Road. His father died when he was an infant, and Thomas began work as a farm hand as a young man. Thomas had served with the 7th Battalion, Royal Welsh Fusiliers (Territorials) prior to enlisting at Norwich into the 27th Battalion, Middlesex Regiment on 13 April 1916. His Territorial training must have served him well, as he embarked for France soon after, on 2 July 1916, and on 12 August was posted to the 17th Battalion, Middlesex Regiment, which was in the Arras sector attached to 6 Brigade, 2nd Division. During the middle of July, the Division began to move south, to take part in the Somme offensive, reaching Morlancourt by 20 July, and moved into positions near Longueval, to take part in the desperate fighting for Delville Wood. The Division saw heavy fighting over the coming weeks, before moving slightly north to Serre, and saw further fighting there during the Battle of the Ancre later that year. The Division wintered on the Somme, and in February 1917 followed the German withdrawal to the Hindenburg Line, advancing past Grevillers to Biefvillers before being withdrawn to rest and refit. The Division then moved to the Arras sector, and took part in the Battle of Arras soon afterwards, seeing heavy fighting again over the coming weeks. On 4 June 1917 the 17th Middlesex took over a section of front line in the Fresnoy Sector, to begin a routine tour. Thomas was killed when the German artillery bombarded the battalion’s lines during the evening of 7 June 1917. The 31-year-old has no known grave and is commemorated on the Arras Memorial, France.

Rowland Morgans, Private, 290276, Royal Welsh Fusiliers. Rowland was the son of David And Catherine Morgans, of 3, Dovey Terrace, Cemmaes. He worked as a farm labourer prior to the war. Rowland enlisted at Newtown on 14 August 1914 into the 1/7th Battalion, Royal Welsh Fusiliers. The battalion was a Territorial unit, which mobilised for war at Newtown in August 1914, as part of North Wales Brigade, Welsh Division and moved to Conway until the end of the month, before moving to Northampton. In December the Division moved to Cambridge and then in May 1915 to Bedford, where the Division was numbered and the formation became 158 Brigade, 53rd (Welsh) Division. On 19 July 1915 the entire Division sailed from Devonport for Imbros and on 9 August 1915 landed at Suvla Bay. Rowlands did not embark for Gallipoli at the time, but remained at Bedford with the 2/7th Reserve RWF. He embarked at Devonport aboard the SS Kalyan on 31 May 1916 and joined A Company of the 1/7th RWF in Egypt, some months after its evacuation from Gallipoli. The Division had moved to Egypt to join the EEF, and helped guard the Suez Canal before taking part in operations to drive the Turks out of the Sinai. The EEF then turned its attention onto driving the Turks out of Palestine, and on 26 March 1917 launched its first offensive against the coastal city of Gaza, which guarded the road to Jerusalem. Initial gains during the day were lost when the assaulting divisions lost touch with each other and communication broke down when a thick fog cloaked the battlefield. Rowland was killed in action during the fighting that day. The 26-year-old has no known grave and is commemorated on the Jerusalem Memorial, Egypt. 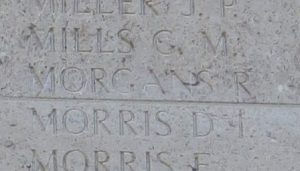 Leopold Grantley Norton, Lieutenant, Durham Light Infantry. Leopold was born at Cowbridge on 23 July 1890, the son of Colonel Reuben Norton and Mrs Evelyn Norton (nee Frosty). The family then purchased Dolcorsllwyn Hall, Cemmaes. Leopold was commissioned into the Durham Light Infantry in 1912, and following the outbreak of war embarked for France with the 2nd Battalion, Durham Light Infantry, which was attached to 18 Brigade, 6th Division, disembarking at St. Nazaire on 10 September 1914. The division arrived in time to reinforce the hard-pressed BEF on the Aisne, taking over trenches north of Troyon on 19 September, and after several days moved to Vendresse, the 2nd DLI suffering some casualties during this period before the whole army was moved north into Flanders. By 15 October the 2nd DLI had taken over positions at Bois Grenier, just south of the Belgian border and on 18 October carried out an assault against the Germans to test their strength. The battalion then enjoyed a day out of the line to rest but on 20 October 1914 was sent back into the line to support the East York’s at Paradis, and carried out two unsuccessful attacks against the Germans, to try and capture La Valée, suffering heavy casualties. Leopold was posted as wounded and missing during the attacks that day. No trace of the 24-year-old was ever found, so he was officially recorded as being killed in action on that date. He has no known grave and is commemorated on the Ploegsteert Memorial, Belgium.

George Griffiths Parry, Private, 55996, Royal Welsh Fusiliers. George was the son of John and Elizabeth Parry, of Bryn Hyfryd, Cemmaes. He enlisted into the 7th Battalion, Royal Welsh Fusiliers at Machynlleth and in the spring of 1917 was drafted to France, being posted to the 15th Battalion, Royal Welsh Fusiliers, which was at Ypres attached to 113 Brigade, 38th (Welsh) Division. The Division had moved to Ypres following heavy losses at Mametz Wood in July 1916, and had taken over the Canal Bank sector at Boesinghe, north of Ypres. Over the coming months the Divisional troops had worked hard, improving the defences and constructing deep dugouts and saps, in preparation to take part in the opening of the Third Battle of Ypres on 31 July 1917. The 15th RWF had spent much of July training at Flechin, moving back to Proven, just behind the lines, on 18 July, and on 23 July moved back into positions in the front line. On 27 July one Company of the 15th RWF was sent out to investigate reports from an RFC aircraft that the Germans had withdrawn, but suffered heavy casualties upon reaching the German lines, as the reports had been incorrect. Nevertheless, the battalion remained in the line and continued to prepare for the launching of the great offensive, the Division being tasked with the capture of Pilckem Ridge. At dawn on 31 July 1917 the Division went over the top, and the 15th RWF, for their part, captured its objective of Iron Cross, before consolidating its gains. George was killed in action during the days fighting. The 28-year-old has no known grave and is commemorated on the Ypres (Menin Gate) Memorial, Belgium.

Albert Thomas Roberts, Private, 15283, Machine Gun Corps. Albert was born at Penegoes in 1894, the illegitimate son of Margaret Jane Roberts. He was raised by his grandmother, Anne Roberts, at the School House, Dylife. Albert worked as a farm labourer prior to enlisting into the Royal Welsh Fusiliers at Machynlleth and upon completing his training was posted to the 5th Reserve Battalion, Machine Gun Corps, which was at Grantham. Albert took ill soon after arriving at Grantham and was taken to Belton Military Hospital at Grantham where he spent several weeks undergoing treatment. He died there on 17 March 1918, aged 24. Albert was buried in Grantham Cemetery. He is not commemorated on the Penegoes war memorial. 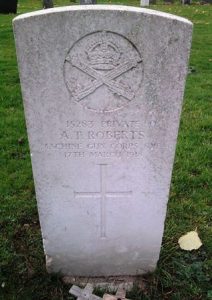 Alfred Edward Wells, Master at Arms, 130203, Royal Navy. Alfred was born at Marylebone on 24 January 1870, the son of Edward and Emily Wells. He enlisted into the Royal Navy on 24 January 1888 and received his first posting aboard HMS Impregnable. Alfred then had a number of postings over the coming years. He married Alice Eileen Rose whilst based at Portsmouth in 1910, and Alice moved to The Retreat, Cemmaes, while Alfred was away at sea. At the outbreak of war Alfred had risen to the rank of Master at Arms and was serving at HMS Victory, and on 18 December 1914 was posted aboard the requisitioned armed merchant cruiser, SS Bayano.  On 11 March 1915 Bayano was on patrol in the North Channel on the Glasgow to Liverpool route, when she was attacked by the German submarine SM U-27, about ten miles west of Corsewall Lighthouse, Galloway, Scotland. The cruiser sank in just five minutes, with the loss of around 200 lives, many of which were later washed up on the Isle of Man. Alfred was 45 years old when he died during the sinking of Bayano, and is commemorated on the Portsmouth Naval Memorial, Hampshire.

Alun Edwards, Aircraftman 1st Class, 633370, Royal Air Force. Alun was the son of Mary Elizabeth Ingram (nee Roberts), of Penegoes. He enlisted into the Royal Air Force and was posted to RAF Penrhos, in Caernarvonshire. Alun was taken ill soon after arriving at Penrhos and died at the Caernarvonshire and Anglesey infirmary, Bangor on 24 July 1940. The 27-year-old was buried with full military honours in St. Hywyn’s New Churchyard, Aberdaron. 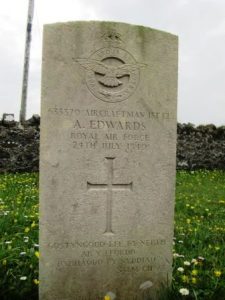