Mochdre is a small village and community in Montgomeryshire, which includes Penstrowed and Stepaside. The men of Mochdre and Penstrowed who died in the First World War are commemorated on a Roll of Honour which is situated in St Gwrhai’s Church, Penstrowed.

Richard Thomas Evans, Gunner, 213125, Royal Field Artillery. Richard was the son of John Evans and Elizabeth Evans (nee Hamer) of Sunny Bank, Mochdre. He enlisted at Welshpool into the Royal Field Artillery, and was posted to the 8th Reserve Brigade, RFA at No. 2 Depot, Fullwood Barracks, Preston for training. Richard had not been at Preston long when he took ill, and he died of apoplexy at Preston Hospital on 21 February 1917, aged 19. His remains were brought home for burial in Pentre Baptist Chapelyard, Mochdre.

Thomas Alfred Jones, Private, 130231, Canadian Infantry. Thomas was born on 8 March 1892, the son of Thomas Jones and Elizabeth Ellen Jones of 1, Bontdulas, Mochdre. He had served for a year with the 7th Battalion, Royal Welsh Fusiliers (Territorial Army) prior to emigrating to Canada and worked as a Bank Clerk at Vancouver. Thomas enlisted into the 72nd Overseas Battalion, Canadian Expeditionary Force at Vancouver on 31 January 1916. Thomas embarked for England with the battalion aboard the SS Empress of Britain and disembarked at Liverpool on 7 May 1916. The battalion then entrained for Bramshott to continue its training. Thomas was drafted to France on 19 June 1916, joining the 16th Battalion, Canadian Infantry. The battalion was attached to the 3rd Canadian Brigade, 1st Canadian Division, and was still in the Ypres Salient. Thomas joined the battalion in camp at Scottish Lines, enjoying a break from service at Hill 60. The battalion then moved back into the line, continuing the normal routine of trench rotation, four days in the front, four in support and four in reserve. During the middle of August the Canadians left the Ypres Salient, and began the slow move south, to the Somme sector. The Canadians relieved the Australians at Mouquet Farm, and saw heavy fighting there and at Courcelette over the coming weeks. Thomas was badly wounded near Courcelette, suffering gunshot wounds to his side and chest and was evacuated to the 49th Casualty Clearing Station, at Contay where he died of his wounds on 14 September 1916, aged 24. He is buried in Contay British Cemetery, Contay, Somme, France. 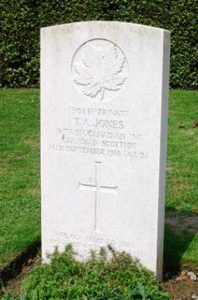 William Jones, Private, 43853, Royal Welsh Fusiliers. William was born on 4 November 1882, the son of Joseph and Elizabeth Jones, of Broombush, Penstrowed. He married Rosa Jones on 5 May 1909, and the couple resided at Wain, Aberhafesp. William worked as a Quarryman prior to the war. He enlisted at Newtown into the Royal Welsh Fusiliers on 11 December 1915 and was posted to Kinmel Park for training. On 9 November 1916 William embarked for France, joining the 5th Infantry Base Depot, and on 9 November 1916 was posted to the 15th Battalion, Royal Welsh Fusiliers, which was at Ypres attached to 115 Brigade, 38th (Welsh) Division. Two weeks later he was transferred to the 2nd Battalion, Royal Welsh Fusiliers, which was on the Somme attached to 19 Brigade, 33rd Division and joined the battalion at Forceville, on 24 November. The battalion was resting and rebuilding following its efforts during the Somme offensive and moved via Mericourt for a camp at Vaux-sur-Somme before moving to another camp at Suzanne. At the beginning of April, the Division moved north to the Arras sector, and moved into trenches near Boiry-Becquerelle, at Croisilles, facing the Hindenburg Line. On 23 April 1917 the 2nd RWF, along with 19 Brigade, took part in assault on the Hindenburg Line, suffering heavy casualties during 24 hours of desperate fighting. The battalion moved back into reserve to rest and rebuild, before returning to the line in front of St. Leger on 18 May and the following day took part in another desperate attack. Again, the Hindenburg Line defences held, and the Allied assault was beaten off. The battalion then had another short break before launching another assault on the Hindenburg Line on 27 May 1917. William was posted as wounded and missing during a terrible day of desperate fighting. No trace of the 36-year-old was ever found, despite extensive enquiries, so he is recorded as having been killed in action on that date. The CWGC erroneously show his date of death as 27 May 1918. William is commemorated on the Pozieres Memorial, France.

John Albert Morris, Private, 88646, The King’s (Liverpool Regiment). John was the son of Jane Morris (nee Turner, formerly Brown) of Oak Farm, Mochdre. He worked as a cattleman for Edward and Margaret Morris at Penthryn, Mochdre, prior to the war. John enlisted into the army at Newtown and was initially posted to the East Surrey Regiment. He was then transferred to the 2/7th Battalion, The King’s (Liverpool Regiment), which was attached to 171 Brigade, 57th (West Lancs) Division. The battalion embarked for France with the Division on 13 February 1917 and disembarked at Le Havre the following day, before moving to the Strazeele area. The Division then took over billets at Fleurbaix before moving into the front line in the Boutillerie sector, for trench initiation and training. The Division held various sectors in the area over the coming months and then in October 1917 moved north into the Ypres Salient, taking part in the Second Battle of Passchendaele. During the middle of November the Division moved out to the Nordausques area to rest. In January 1918 the Division moved back to the Erquinghem sector and over the coming weeks again held various sectors of the front line in the area. As a result of heavy losses suffered by the Allies during the German Spring offensive, to the south, the Division left Flanders at the beginning of April and transferred to the Somme sector, near Gommecourt. From 21 August 1918 onwards the Division took part in the great offensive, driving towards the Hindenburg Line. By 31 August John’s battalion was in position ready to assault the strongly defended village of Hendecourt and on the following day, 1 September 1918, launched its assault, capturing all of the objectives as planned. John was killed in action during the days fighting. The 22-year-old has no known grave and is commemorated on the Vis-en-Artois Memorial, France.

John Edward Owen, Private, 61033, Royal Welsh Fusiliers. John was born in Ellesmere, Shropshire in 1898, the son of Pryce Owen and Sarah Ann Owen (nee Davies). By 1901 the family had moved back to their native Mochdre, and lived at Tyn-y-Bar. John enlisted into the 3rd Battalion, Royal Welsh Fusiliers at Welshpool and was posted to Litherland Camp, Liverpool for training. John had not been at Liverpool long, before he took ill and died of pneumonia at Blundellsands Military Hospital on 10 July 1918, aged 19. His remains were brought home and he was buried two days later in All Saints Churchyard, Mochdre.

William Job Turner, Private, 89612, Royal Welsh Fusiliers. William was born on 2 July 1899, the son of David Edward Turner and Sarah Jane Turner (nee Reese) of 10 Raven Square, Welshpool, Montgomeryshire. Worked for his uncle, Edward Rees of Cwmbyr, Mochdre, prior to the war. William enlisted into the Royal Welsh Fusiliers at some time in 1917, and the following year was drafted out to France, joining the 13th Battalion, Royal Welsh Fusiliers, which was on the Somme attached to 113 Brigade, 38th (Welsh) Division. The Division was holding the line at Bouzincourt Ridge, north of Albert, having moved there at the end of March 1918. On 21 August 1918 the Division launched an assault across the River Ancre, as part of the greater Allied offensive, and over the coming days captured Thiepval Ridge, Pozieres, Mametz Wood and High Wood, whilst advancing across the old Somme battlefields of 1916.The advance saw the Division take part in several costly assaults over the coming weeks, famously crossing the Canal du Nord, and then once the Hindenburg Line had been breached, the Division advanced north-east, past Le Cateau, towards the Forest of Mormal, forcing the crossing of the River Selle. William was wounded during the final days of the war, and was evacuated to the 3rd Casualty Clearing Station at Caudry, where he died of his wounds on 17 November 1918, aged 19. He is buried in Caudry British Cemetery, Nord, France.

Pryce Howell Davies, Fusilier, 14567154, Royal Welch Fusiliers. Pryce was the son of Mary Ellen Davies (nee Williams), of Mochdre. He enlisted into the army and was posted out to Burma to join the 2nd Battalion, Royal Welch Fusiliers, which was attached to the 29th Infantry Brigade. The Brigade joined the 36th Infantry Division in 1944, and took part in severe fighting in the jungles of Burma, after crossing the Irrawaddy. Pryce died in Burma on 13 January 1945. The 20-year-old is buried in Taukkyan War Cemetery, Myanmar.

Malcolm David Owen, Corporal, 2359273, Royal Corps of Signals. Malcolm was born on 15 November 1908, the son of Hugh and Gertrude Owen, of Llanelltyd Post Office, Dolgellau. He worked as a Postman prior to marrying Edith Mary Davies, of Mochdre, in 1941. He had enlisted into the Royal Corps of Signals and had been posted to the 48th Light Anti-Aircraft Regiment, Royal Artillery Signals Section. The Regiment sailed for the Far East from Gourock on the day Japan declared war, aboard the SS Duchess of Athol, and disembarked at Tanjong Priok Harbour, Batavia, Java, joining ABDA Force. The Japanese invaded Java on 28 February 1942, and after less than two weeks of fighting, Java was surrendered to the Japanese on 12 March. Malcolm and the surviving members of his Regiment were taken into captivity and taken to a POW camp in Batavia. Malcolm survived over three arduous years in Japanese captivity, but following the Japanese surrender took ill and died of malaria at Kauching Camp POW Hospital, Borneo on 23 August 1945. The 37-year-old is buried in Labuan Cemetery, Malaysia.

William Leslie Pryce, Sergeant, 1421608, Royal Air Force Volunteer Reserve. William was born on 26 June 1924, the son of Richard Charles Pryce and Mary Elizabeth Pryce (nee Hughes), of Brook Terrace, Mochdre. He worked as a Clerk for the local bus company prior to enlisting into the Royal Air Force Volunteer Reserve and was posted to 31 Squadron, SAAF. The Squadron operated in the Mediterranean, originally as a Coastal Bomber unit, before converting to a Heavy Bomber unit, and flew the Consolidated B-24 Liberator. On 13 October 1944 William was flying aboard Liberator KG875, which had been details to drop supplies to partisan troops in Northern Italy, when the aircraft was lost, crashing near Milan and killing all her crew of eight men. William was 20 years old when he was killed in the crash, and is buried together with his fellow crewmen in Milan War Cemetery, Italy.

John Stanley Williams, Private, 14387387, Monmouthshire Regiment. John was born in 1921, the son of Albert Williams and Eliza Mary Williams (nee Evans), of 3, Stepaside, Mochdre. He worked as a sawman at Jones & Leach prior to the war. John enlisted into the army and was posted to the 3rd Battalion, Monmouthshire Regiment, a Territorial Army unit, which was attached to the 53rd (Welsh) Division. The Division moved to Pembroke Dock, before being posted to Northern Ireland in 1941, returning to England in 1941. During the summer of 1942 the 3rd Monmouth’s transferred to the 11th Armoured Division and trained for armoured warfare. The battalion landed on the beaches of Normandy on 14 June 1944, and took part in the difficult campaign to break out of the Normandy beach-head. The Division then took part in the drive north through Belgium into Holland. During September 1944 the Allies launched Operation Market Garden, and the 11th Armoured Division took part in the ground element, protecting the right flank of the advance towards Arnhem. The 3rd Monmouths had occupied St. Anthonis on 25 September and came under attack from a column of German armoured vehicles. John died in Holland on 29 September 1944, possibly as a result of this German counter-attack. The 23-year-old was originally buried on the battlefield, but after the war his grave was exhumed, and he was re-interred in Overloon War Cemetery, Netherlands. 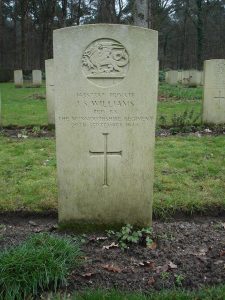