Llanfihangel-Yng-Ngwynfa is a village and parish situated about eight miles west-northwest of Welshpool on the B4382, Llanfyllin to Llanwddyn road. The parish originally incorporated the surrounding villages of in Dolanog and Llwydiarth. The village church was dedicated to St. Michael but is no longer in use. The men, and one woman, of the parish who fell during both World Wars are commemorated on the war memorial, which is situated at the centre of the village. The inscription on the memorial reads: ‘Adgof uwch anchof cofnod am y rhan a cymerwyd can feibion Llanfihangel ar cylch yn y Rhfel Mawr 1914-1919’ (In Remembrance of the Fallen who served from Llanfihangel and surrounding area in The Great War). 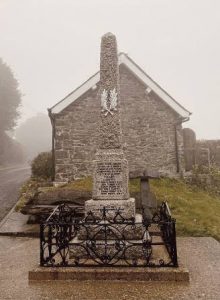 Edwin Davies, Private, 73719, Royal Welsh Fusiliers. Edwin was the son of Walter and Sinah Davies, of Pwynt, Llanfyllin. He enlisted into the Royal Welsh Fusiliers, and was drafted to France in the Spring of 1918, among a number of reinforcements for the 9th Battalion, Royal Welsh Fusiliers. The battalion was attached to 58 Brigade, 19th (Western) Division. The Division had wintered in the Cambrai sector, following the closure of the Battle of Cambrai, and was holding a section of the line in the Flesquières Salient. On 21 March 1918, the Germans launched the first of three offensives on to the section of the front running from Flesquières to St. Quentin, and the 19th Division was thrown into desperate fighting as it was pushed back over the coming days. The battered Division was then moved to the Messines sector to rest, but on 11 April became caught up in the second phase of the German offensive, which had been launched along the Lys Valley on 9 April, and again became caught up in desperate fighting. The remnants of the Division were moved south to the Aisne sector to rest and rebuild, but by sheer bad luck, the Germans third, and last, offensive was launched here on 27 May 1918, and the Division was once more caught up in desperate fighting. After being rebuilt once more, the Division moved north, and from 21 August 1918 took part in the great Allied offensive towards the Hindenburg Line, reaching Cambrai by 10 October. By the end of the month the Division had crossed the River Selle, and by the time of the Armistice was at Eth. Over the coming weeks the Division moved back to Cambrai, and then to the Candas area, as demobilisation started, and celebrated Christmas at Berteaucourt. Edwin unfortunately took ill, contracting influenza, and died on 11 February 1919. The 20-year-old is buried in Pont-Remy British Cemetery, France.

Robert Morris, Private, 291069, Royal Welsh Fusiliers. Robert was the son of Robert and Elizabeth Morris, of Powis Terrace, Llanrhaeadr-ym-Mochnant. He worked as a servant at Gwynfa prior to the war. Robert enlisted into the 7th Battalion, Royal Welsh Fusiliers at Llanrhaeadr soon after the outbreak of war and was posted to Park Hall Camp, Oswestry for training. He was drafted to Egypt early in 1916, joining the 1/7th Battalion, Royal Welsh Fusiliers, which was attached to 158 Brigade, 53rd (Welsh) Division. The Division had been evacuated from Gallipoli in December 1915, moving to Egypt to join the EEF, and helped guard the Suez Canal before taking part in operations to drive the Turks out of the Sinai. The EEF then turned its attention onto driving the Turks out of Palestine, and on 26 March 1917 launched its first offensive against the coastal city of Gaza, which guarded the road to Jerusalem. Initial gains during the day were lost when the assaulting divisions lost touch with each other, and communication broke down when a thick fog cloaked the battlefield. Robert was killed in action during the terrible fighting that day. The 29-year-old is buried in Gaza War Cemetery. His brother William was killed in France in 1918.

Thomas Morris, Private, 1200, Welsh Horse Yeomanry. Thomas was the son of Henry and Jane Morris, of Frondeg Uchaf, Llanfyllin. He enlisted at Newtown into the Welsh Horse Yeomanry soon after the outbreak of war. The Welsh Horse had formed in Glamorgan in August 1914, under the administration of the Glamorgan T.F. Association with its headquarters at Cardiff. Later in the year the regiment transferred to the Montgomeryshire T.F. Association with its headquarters moving to Newtown. By early 1915 the 1st Battalion, Welsh Horse joined the 1/1st North Midland Mounted Brigade, 1st Mounted Division in the Diss area of Norfolk. During February 1915 the battalion transferred to the 1/1st Eastern Mounted Brigade, 1st Mounted Division in the Woodbridge area. The Division dismounted and in September 1915 sailed aboard the SS Olympic for Gallipoli, landing at Anzac Cove on 25 September where the Welsh Horse became attached to the 54th Division. Thomas did not embark with the battalion for Gallipoli, but following its evacuation from the Peninsula in December 1915, he embarked for Egypt to join the battalion on the Suez Canal Defences. Thomas had not been in Egypt long when he took ill, and he died of fever at Suez on 14 April 1916. The 25-year-old is buried in Suez War Memorial Cemetery, Egypt.

John Thomas Tanner, Private, 23, Army Cyclist Corps. John was born at Llandyrnog in 1887, the son of Police Constable George Henry Tanner and Sarah Tanner (nee Owens). His mother died in 1895 and his father in 1904, so John and his five siblings were split up, being raised by other relatives around Welshpool. John worked as a farm labourer at Tygwyn, Llanfyllin prior to the war. He had enlisted into the 7th Battalion, Royal Welsh Fusiliers at Llanfyllin on 28 March 1912 and had attended every annual TA summer camp over the coming years. The battalion was a Territorial unit, which mobilised for war at Newtown in August 1914, as part of North Wales Brigade, Welsh Division and moved to Conway until the end of the month, before moving to Northampton. In December, the Division moved to Cambridge and then in May 1915 to Bedford, where the Division was numbered and the formation became 158 Brigade, 53rd (Welsh) Division. John was then transferred to the 53rd Division Cyclist Company. On 19 July 1915, the entire Division sailed from Devonport for Imbros and on 9 August 1915 landed at Suvla Bay. The infantry moved off the beaches across the Salt Lake, under shellfire, into the scrub covered Chocolate Hill, but due to a lack of maps and no knowledge of the terrain, many of the units became disorientated, and the situation became chaotic. John was wounded at Gallipoli on 22 August and was taken to the Welsh Casualty Clearing Station for treatment. Seriously wounded, he was taken aboard the awaiting Hospital Ship Arcadian where he died of his wounds on 28 August 1915. The 27-year-old was buried at sea, so is commemorated on the Helles Memorial, Gallipoli.

Albert Watkin, Private, 355030, Royal Welsh Fusiliers. Albert was the son of John and Sarah Watkin, of Lletty, Llanfihangel. He married Alice Maud Pugh, of Tyrbryth, Llansantffraid-ym-Mechain on 7 December 1914. Albert worked on his own farm prior to enlisting at Llanfyllin into the Montgomeryshire Yeomanry on 1 March 1910 and attended the annual TA summer camp over the coming years. On 5 August 1914, the Montgomeryshire Yeomanry was mobilised at Welshpool, as part of the South Wales Mounted Brigade, before moving via Hereford to Thetford, to join the 1st Mounted Division. On 4 March 1916 the 1st Mounted Division sailed for Egypt to join the EEF. On 4 March 1917, the battalion merged with the Welsh Horse Yeomanry to form the 25th (Montgomery & Welsh Horse Yeomanry) Battalion, Royal Welsh Fusiliers, as part of the newly formed 231 Brigade, 74th (Yeomanry) Division. The Division assembled in Egypt as part of the EEF, before crossing the Suez Canal into the Sinai, and saw its first major action during the Second Battle of Gaza. The battle was a failure, and the EEF was re-organised under a new commander, Sir Edmund Allenby, before launching the Third Battle of Gaza on the night of 31 October 1917. This assault was launched along a winder front, running from Gaza to Beersheba, and this time the EEF prevailed, opening the door to Jerusalem. On 29 November, 231 Brigade was ordered to take over a line from the Wadi Zait to the left of 181 Brigade, 60th Division, south-east of Beit Dukka. The 25th RWF moved forward via the track to el Tireh, intent on capturing Hill 1750 and pushing on the el Foka. The situation was hectic, with the advance party getting lost and coming under machine-gun fire on the following morning, 30 November 1917. Albert was killed in action during the advance that morning. The 30-year-old is buried in Jerusalem War Cemetery, Israel.

Mair Myfanwy Richards, Aircraftwoman 2nd Class, 2079028, Women’s Auxiliary Air Force. Mair was the daughter of Phillip Owen Richards and Jane Ellen Richards, of Llwydiarth. She enlisted into the Women’s Auxiliary Air Force as soon as she turned 18 and was posted to RAF Preddanack, near Mullion, on the Lizard Peninsula in Cornwall, being stationed at The Officers Mess, at the Polurrian Hotel, Mullion. On 25 April 1943 Mair was walking at Church Cove, Mullion when she stood on a mine and was killed instantly. The remains of the 19-year-old were brought home and she was buried in St. Mary’s Churchyard, Llwydiarth on 1 May. Her father’s brother, Milton Mail Richards, had been killed in France in 1918.