Hyssington is a parish in the South-Eastern corner of Montgomeryshire, on the border with Shropshire, and lies within Churchstoke community. The village is home to a motte and bailey castle, as well as the ancient Church, which is dedicated to St. Etheldreda. Five men of the village who fell during the Great War are commemorated on a war memorial plaque which has recently been removed from Hyssington Primitive Methodist Chapel, and is now safely situated in St. Etheldreda’s Church. The memorial was unveiled by Major Sykes on 28 June 1921. I have taken the opportunity to add details of several men from the village who are not commemorated on the war memorial. 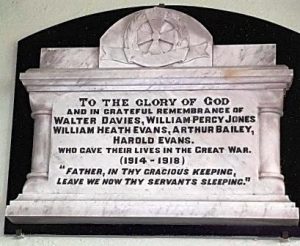 Arthur Bailey, Private, 3263, King’s Shropshire Light Infantry. Arthur was the son of Emmanuel Bailey and Sarah Ann Bailey (nee Howle), of Lower Tasker, Hyssington. His mother died in 1902, and his father re-married Rhoda Evans in 1908. Arthur worked as a cowman at New House, Cornden, Hyssington prior to the war. He enlisted at Welshpool into the Montgomeryshire Yeomanry, and after completing his training was posted to France, initially to join the Welsh Regiment. He was instead posted to the 10th Battalion, King’s Shropshire Light Infantry, which was attached to 231 Brigade, 74th (Yeomanry) Division. The Division had spent most of the war in Palestine, but due to the terrible casualties suffered by the British on the Western Front in March and April 1918 the Division was recalled to the Western Front, and arrived at Marseilles during May 1918. The Division trained near Le Cauroy before taking over positions in the St. Floris Sector, moving into the front line between the La Bassée Canal and the River Lys, with the left resting on the small village of Corbie. The Division faced the recently lost town of Merville, some 3,000 yards away. To the south, the Allies launched their offensive on 21 August 1918, and began the great advance towards the Hindenburg Line. The 74th Division was transferred south to join the offensive and assembled around Beaucourt Chateau. At the end of August, the Division moved into the line about three miles north of Péronne and took part in several minor actions whilst preparing to launch a frontal attack against the outer defences of the Hindenburg Line, near Lempire and Ronssoy. On 17 September the 10th KSLI moved into position with the other attacking battalions of the Division, and at dawn on the following day launched its assault on Orchard Post and Gillemont Farm. Fighting raged over the coming days. Arthur was killed in action when the 10th KSLI attacked the German position known as the Quadrilateral on 22 September 1918. The 24-year-old is buried in Unicorn Cemetery, Vendhuile, France. His step-brother, Alfred Harold Evans, was killed in 1917. 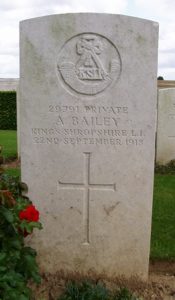 Walter Davies, Private, 31077, South Lancashire Regiment. Walter was the son of Walter and Sarah Davies, of Brook House, Hyssington. He worked as a Waggoner for Mr Harris at Prospect Villa, Bishop’s Castle prior to the war. Walter enlisted at Shrewsbury into the 2/4th Battalion, King’s Shropshire Light Infantry on 24 April 1915. Walter embarked for France on 7 September 1916, and joined No 4 Infantry Base Depot at Rouen. On 16 September Walter was among 85 men of the KSLI posted to the 8th Battalion, South Lancashire Regiment, which was attached to 75 Brigade, 25th Division and joined the battalion at Cramont, where it was in rest billets following heavy fighting on the Somme. At the end of the month the battalion moved back into the front line at Hessian Trench, where Walter had his first taste of trench life. The Division moved to the Ploegsteert sector following the Somme battles, and fought in the Battle of Messines in June 1917. It then took part in the Passchendaele offensive before moving south to the Arras sector, and took part in the heavy fighting which followed the German Spring offensive of 21 March 1918. The Division took part in the great offensive from 21 August onwards and after the Armistice moved to billets in Le Cateau. Walter had gone home on leave following the Armistice, but took ill and was taken to the Berrington War Hospital at Shrewsbury, where he died of apoplexy on 19 January 1919, aged 26. He is buried in St. Etheldreda’s Churchyard, Hyssington.

Alfred Harold Evans, Private, 241615, Welsh Regiment. Alfred, known as Harold, was born in Coedpoeth in 1898, the son of Alfred Evans and Rhoda Evans (nee Walters). Following the death of his father, his mother re-married Emmanuel Bailey, and moved to Lower Tasker, Hyssington. Harold enlisted at Merthyr into the 2/5th Battalion, Welsh Regiment soon after the outbreak of war. Alfred embarked for Egypt in 1916, and was posted to the 1/5th Battalion, Welsh Regiment, which was attached to 158 Brigade, 53rd (Welsh) Division. The Division had been evacuated from Gallipoli in December 1915, moving to Egypt to join the EEF, and helped guard the Suez Canal before taking part in operations to drive the Turks out of the Sinai. The EEF then turned its attention onto driving the Turks out of Palestine, and on 26 March 1917 launched its first offensive against the coastal city of Gaza, which guarded the road to Jerusalem. Initial gains during the day were lost when the assaulting divisions lost touch with each other and communication broke down when a thick fog cloaked the battlefield. Alfred was killed in action during the fighting that day. The 19-year-old has no known grave and is commemorated on the Jerusalem Memorial, Israel. His half-brother, Arthur Bailey, was killed in 1918.

William Heath Evans, Gunner, 206657, Royal Field Artillery. William was the son of Albert and Mary Jane Evans, of Llanerch, Churchstoke. He enlisted into the Royal Field Artillery at Welshpool, and was posted to the 70th Battery, 34th Brigade, Royal Field Artillery. He probably joined the battery in France early in 1917, and would have taken part in the Passchendaele offensive later that year. Unfortunately, the war diary for the Brigade for 1918 does not appear to exist, but the Brigade was in the Arras sector over the summer of 1918, preparing to take part in the launch of the great Allied offensive on 21 August. William was killed in action on the opening day, probably by counter-battery fire, on 21 August 1918. The 20-year-old is buried in Berles New Military Cemetery, France.

Rhys Pugh Gittins, Private, 55347, Royal Welsh Fusiliers. Rhys was born at Hyssington in 1888, the son of James and Mary Gittins. The family later resided at Lower Fold, Gritt, Minsterley. Rhys enlisted at Shrewsbury on 29 November 1915 and was placed on the Army Reserve. On 12 April 1916 Rhys was mobilised and posted to the 3/7th Battalion, Royal Welsh Fusiliers at Park Hall Camp, Oswestry. On 8 December 1916 Rhys embarked for France, and joined the 14th Battalion, Royal Welsh Fusiliers, which was in the Canal Bank Sector north of Ypres, attached to 113 Brigade, 38th (Welsh) Division. The Division had moved here following its famous assault on Mametz Wood in July 1916, and remained here until taking part in the opening of the Passchendaele offensive, capturing the Pilckem Ridge on 31 July 1917. Rhys fought with the battalion throughout the rest of the war, and was taking part in the great offensive when he was wounded on 20 October 1918, and five days later was evacuated to England for treatment. He was demobilised on 21 January 1919 and returned home, but by now his health had broken down, and he was diagnosed as suffering from tuberculosis. Rhys died of tuberculosis at home on 25 February 1920, aged 31. He was buried in St. Etheldreda’s Churchyard, Hyssington. Rhys is not commemorated on the Hyssington war memorial.

William Percy Jones, Sapper, 77107, Royal Engineers. William was the son of George Edward Jones and Martha Elizabeth Jones, of The Post Office, Hyssington, Churchstoke. He worked as a Post Office Clerk prior to the war. William enlisted at Welshpool into the Royal Engineers, and was posted to France, joining A Corps, HQ Signal Depot, Royal Engineers. William took ill whilst serving on the Western Front, and was taken to the 28th Stationary Hospital at Abbeville, where he died of disease on 12 May 1918, aged 23. He is buried in Abbeville Communal Cemetery Extension, France.

Arthur Yapp, Private, 20096, Royal Welsh Fusiliers. Arthur was the son of John and Mary Yapp, of Wood Cottage, Churchstoke. He followed in his father’s profession and became a sawyer, before marrying Emma Lockley (nee Ruscoe), a widow, in 1897, and the couple lived at Dingle House, Hyssington. Arthur had served in the King’s Shropshire Light Infantry at some time prior to the war. On 31 May 1915 he re-enlisted at Welshpool into the 7th Battalion, Royal Welsh Fusiliers. Due to his age, Arthur was transferred to No 1 Supernumerary Company, but his health had by now begun to fail, and he was taken to Bangor Hospital where he was diagnosed as suffering from cardiac disease. He was discharged from the army as medically unfit on 14 January 1916, and returned home to Hyssington, where he died of heart disease on 1 February 1916, aged 47. Arthur was buried in St. Etheldreda’s Churchyard, Hyssington. He is not commemorated on the Hyssington war memorial.

John Herbert Malet Shaw, Squadron Leader, 44536, Royal Air Force. John was the son of Thomas Wood Shaw and Agnes Cecilia Shaw (nee Malet), of Culmington Manor, Craven Arms. Following the death of his father on 24 March 1924, the family moved to The Llanerch, Hyssington. John worked for the family cotton business prior to the war, and had gained his civilian pilots’ licence at the Lancashire Aero Club on 1 October 1937. He was commissioned into the Duke of Lancashire s Own Yeomanry soon after the outbreak of war, but then transferred into the Royal Air Force, and after completing his training was posted to North Africa with 18 Squadron, RAF. On 25 April 1943, John took off from RAF Maison Blanche, as pilot of Douglas Boston III, Serial AL497. The aircraft suffered issues on take off and crashed, killing John and his three crewmen. John was 27-years-old and is buried alongside his fellow crewmen in Thibar Seminary War Cemetery, Tunisia. John is not commemorated on the Hyssington war memorial. 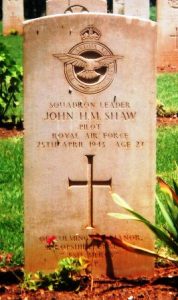 William Arthur Thomas, Gunner, 908262, Royal Artillery. William was the son of Richard Thomas and Catherine Sarah Beatrice Thomas (nee Lloyd), of Hyssington. He enlisted into the Royal Artillery and was posted to 51 Medium Regiment, Royal Artillery. The regiment was a North Midland (Staffordshire) based Territorial Army unit, which trained at Stone, Staffordshire, and Bradford-on-Avon before embarking for France with the BEF in February 1940, equipped with the 6-inch howitzer. The regiment took over a section of the Maginot Line, attached to the 51st (Highland) Division, and saw heavy fighting before being forced to withdraw to Le Havre, where the survivors were evacuated. During the period of the Battle of Britain the regiment manned coastal defence guns in Western Command, and then in December 1940 it assembled at Ellesmere for re-equipping and retraining on the new 5.5-inch gun. William died in Shrewsbury on 31 March 1941, aged 23. His body was brought home for burial in St. Etheldreda’s Churchyard, Hyssington. William is not commemorated on the Hyssington war memorial, but is commemorated at Churchstoke.