Dolanog is a village in Montgomeryshire situated on the B4382 road between Llangyniew and Llanfihangel-yng-Ngwynfa, some four miles north-north-west of Llanfair Caereinion. The village lies in a picturesque location in the Vyrnwy valley, with a fine single-arched bridge spanning the river below the church. The church is dedicated to St. St John the Evangelist, and within its grounds is situated the village war memorial, which takes the form of an obelisk on a square plinth, set into a banked enclosure. 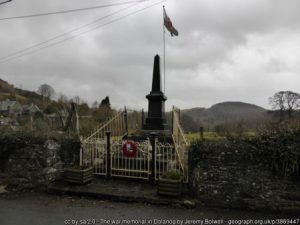 Lewis Jones Edmunds, Shoeing Smith, 146519, Royal Field Artillery. Lewis was the son of Josiah and Jane Edmunds, of The Smithy, Dolanog. He worked for his father as a blacksmith prior to the war. Lewis enlisted into the Royal Field Artillery at Welshpool and due to his skills as a blacksmith, was granted the rank of Shoeing Smith after completing his training. He then embarked for the Mediterranean and was posted to A Battery, 99th Brigade, Royal Field Artillery which had been in Salonika since December 1915, attached to the 22nd Division. By the time Lewis had arrived in Salonika, the fighting had relatively calmed down, but during August 1916 the Division took part in heavy fighting during the Battle of Horseshoe Hill, then in September at the battle of Machukovo. Lewis became ill and died of disease in Salonika on 2 October 1916, aged 40. He is buried in Salonika (Lembet Road) Military Cemetery, Greece. 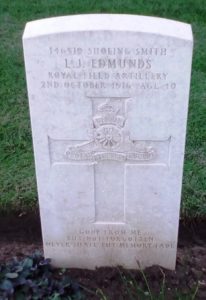 David William Morgan Harris, Private, 54728, Royal Welsh Fusiliers. David was the son of Morgan Jones Harris, and Leah Harris (nee Morgan), of Hendafarn, Llanfair Caereinion. He worked in his father’s carpentry and building business prior to enlisting at Welshpool into the army, and after completing his training, was drafted to France in the summer of 1916, joining the 10th Battalion, Royal Welsh Fusiliers, which was attached to 76 Brigade, 3rd Division. By the middle of June 1916, the Division had moved out of the Ypres Salient to billets around Eperlecques, where intense training was carried out prior to moving to the Somme sector by 2 July. The main Somme offensive had opened on the previous day, and the 3rd Division was ready to enter the fray, bivouacking at Bronfay Farm by 9 July and on 13 July moved into the captured German lines at Montauban Alley. The 10th RWF took part in heavy fighting over the coming days, and on 19 July received orders for an assault on Delville Wood. Just after midnight the following day the battalion moved forwards and became caught in in terrible fighting within the wood, the fighting of such severity that two men of the battalion were awarded the Victoria Cross. On 25 July, the shattered battalion was relieved and moved into reserve and did not move back into the line until 17 August, when the battalion attacked Lonely Trench. On 23 August, the Division moved out of the line to rest and moved to Noeux-les-Mines, near Loos. After a month there, the Division moved back into a rest area for further training before moving back south to the Somme and by 12 November took over trenches at Serre. On the following day, 13 November 1916, the Division launched an assault against the German positions at Serre. The 10th RWF reached Serre village, but the flanking battalions failed to keep up, and heavy losses were suffered, with almost 300 officers and men killed, wounded, or missing. David had been killed in action during the attack on Serre that day. The 34-year-old has no known grave and is commemorated on the Thiepval Memorial, France.

Edwin Jones, Private, 53768, Royal Welsh Fusiliers. Edwin was the son of David and Elizabeth Jones, of Plas Dolanog, Llanfair Caereinon. He worked on his parent’s farm prior to the war. Edwin enlisted into the Royal Welsh Fusiliers at Welshpool and was probably posted to Kinmel Park for training. He was drafted out to France in the summer of 1916, joining the 1st Battalion, Royal Welsh Fusiliers, which was on the Somme, attached to 22 Brigade, 7th Division. The Division had taken part in the opening assault of the Somme offensive on 1 July 1916, advancing from positions near Bois Francais, near Fricourt, and capturing the village of Mametz, one of the few successes of 1 July 1916. The battalion then took part in further attacks to push forwards, to the south of Mametz Wood, and upon being relieved, witnessed the troops of the 38th (Welsh) Division moving forward to launch its assault on Mametz Wood. On 14 July, with the wood taken, the 7th Division moved back into the line, with orders to capture Bazentin-le-Petit, before taking part in the terrible attacks on High Wood over the coming days. On 22 July the 1st RWF was relieved, moving back into reserve to rest and rebuild at La Chaussee. By 12 August the battalion had moved forwards to Dernancourt, and on 26 August marched further forward, to take part in the Divisions assault on Ginchy. The Division saw heavy fighting over the coming days, before the 1st RWF had another short break, but on 1 September the battalion received orders to push forwards again to launch a fresh assault on Ginchy from Montauban Alley. On 3 September 1916 the 1st RWF launched its assault, but suffered severe casualties, with over 200 officers and men killed, wounded, or missing. On 8 September the Division entrained at Albert for Flanders and moved to Merelessart where the men began a scheme of training before taking over a sector of the front line at Ploegsteert Wood, but within weeks the Division was moved back to the Somme, where it spent a miserable winter holding the Beaumont Hamel sector. On 21 January the 1st RWF moved into reserve at Rubempre, but two weeks later moved back into the line, just as the Germans were beginning to withdraw towards the Hindenburg Line, to shorten their front. Over the coming weeks the 7th Division moved forward, following the withdrawal and by 30 March 1917 had reached Croisilles, facing the Hindenburg Line. The village was believed to have been evacuated, so two patrols were sent into Croisilles, coming under heavy fire as they entered the ruined village. Edwin was killed in action that day. The 25-year-old is buried in St. Leger British Cemetery, France. 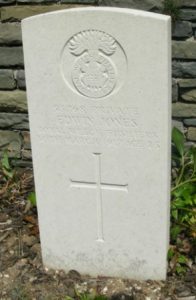 Thomas Jones, Private, 90236, Royal Welsh Fusiliers. Thomas was the son of David and Elizabeth Jones, of Penybryn, Dolanog. He enlisted into the army during the summer of 1918 and was posted to the 3rd Battalion, Royal Welsh Fusiliers, which was at Litherland Camp, Liverpool. The battalion was used for training men ready to be drafted out to the regular 1st and 2nd Battalions of the Royal Welsh Fusiliers, but with the war ending, Thomas never served overseas. He remained at Litherland with the 3rd RWF after the Armistice, but contracted influenza and died at the Royal Infirmary, Liverpool on 2 May 1919, aged 20. His remains were brought home and he was buried in St. John’s Churchyard, Dolanog.

Thomas Williams, Private, 41708, Yorkshire Regiment. Thomas was the son of Edward and Jane Williams, of Glanrhyd, Llanwddyn. He married Elizabeth Ellen Edwards of Llanfyllin on 26 February 1913 and the couple set up home at Hendy, Dolanog. Thomas enlisted into the Royal Field Artillery, but after being drafted to France in the winter of 1916-17, was transferred to the 6th Battalion, Yorkshire Regiment (Green Howards), which was attached to 32 Brigade, 11th (Northern) Division. The Division had fought at Gallipoli, before being evacuated to Egypt, and had moved to France in the summer of 1916, taking part in the Somme offensive, at the Battle of Flers-Courcelette soon after. The Division wintered on the Somme, enduring one of the coldest winters in years, in terrible conditions, and as the New Year dawned, the 6th Yorkshire’s were in billets at Forceville. Thomas took ill at sometime in January 1917, and was evacuated to hospital at Étaples, where he died of lobar pneumonia on 25 January 1917. The 32-year-old is buried in Étaples Military Cemetery, France.