Criggion is a village in Montgomeryshire, situated about one and a half miles north of Middletown and the same distance east of Arddleen, near the border with Shropshire. Nearby are the ruins of the Criggion Radio Station, which was the communications centre for the Royal Navy with its fleets around the world. Situated within the village is the 18th Century Church, which is dedicated to St Michael and All Angels. The Church contains two war memorials, one to those who served and returned home safely from the Great War and another to the fallen of the Great War. I do not have any photographs of these memorials, but there is possibly a smaller memorial to the fallen of the Second World War in the Church?

William John Parry, Sergeant, 355190, Royal Welsh Fusiliers. William was the son of John Parry and Mary Ann Parry (nee Hughes), of Lacon Villa, Criggion. He resided at Heldre Hall, Buttington prior to enlisting into the 1/1st Battalion, Montgomeryshire Yeomanry at Welshpool on 26 August 1914. The Montgomeryshire Yeomanry had been mobilised at Welshpool at the outbreak of war, as part of the South Wales Mounted Brigade, before moving via Hereford to Thetford, to join the 1st Mounted Division. On 4 March 1916 the 1st Mounted Division sailed for Egypt to join the EEF. On 4 March 1917 the battalion merged with the Welsh Horse Yeomanry to form the 25th (Montgomery & Welsh Horse Yeomanry) Battalion, Royal Welsh Fusiliers, as part of the newly formed 231 Brigade, 74th (Yeomanry) Division. The Division assembled in Egypt as part of the EEF, before crossing the Suez Canal into the Sinai, and saw its first major action during the Second Battle of Gaza. The battle was a failure, and the EEF was re-organised under a new commander, Sir Edmund Allenby, before launching the Third Battle of Gaza on the night of 31 October 1917. This assault was launched along a winder front, running from Gaza to Beersheba, and this time the EEF prevailed, opening the door to Jerusalem. Due to the terrible casualties suffered by the British on the Western Front in March and April 1918 the Division was recalled to the Western Front and arrived at Marseilles during May 1918. The Division trained near Le Cauroy before taking over positions in the St. Floris Sector, moving into the front line between the La Bassée Canal and the River Lys, with the left resting on the small village of Corbie. The Division faced the recently lost town of Merville, some 3,000 yards away. To the south, the Allies launched their offensive on 21 August 1918, and began the great advance towards the Hindenburg Line. The 74th Division was transferred south to join the offensive and assembled around Beaucourt Chateau before moving forwards to the area around the twin villages of Lempire and Ronssoy, launching an assault against the outer Hindenburg Line defences on 18 September. After suffering heavy casualties, the Division was relieved and entrained at Péronne for Northern France, taking over a section of front line near Hinges on 2 October. Over the coming days the Division began to advance, joining the Great Advance in Flanders, and began to push the Germans back towards the Belgian frontier. By 17 October the Division had reached Faches, and on the following day took the village of Sainghin, before crossing the River Marcq, before pushing forwards to the village of Camphin. William was killed in action near Camphin on the following day, 20 October 1918. The 27-year-old is buried in Lamain Communal Cemetery, Belgium. William is not commemorated on the Criggion war memorial but is commemorated at nearby Buttington. 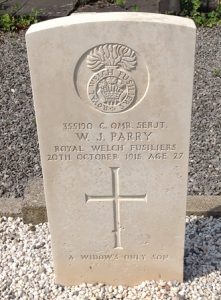 Albert William Phillips, Private, 15303, Royal Welsh Fusiliers. Albert was born in 1888, the eldest of three sons of Lewis and Annie Phillips, of Criggion. He worked as a cowman at Middle Farm, Criggion prior to the war. He enlisted at Wrexham into the Royal Welsh Fusiliers soon after the outbreak of war and was posted to the 10th Battalion, Royal Welsh Fusiliers, which was attached to 76 Brigade, 3rd Division. The Division trained at Aldershot before landing in France on 27 September 1915 and moved to positions in the Ypres Salient for trench initiation and training before taking over a section of the line at St. Eloi, near Ypres. The Division saw heavy fighting during the Actions of the Bluff in February 1916 and then at the Actions of the St Eloi Craters from 27 March, following the blowing of six large underground mines by the British. The 27th Division captured all but two craters, however this prompted the Germans to counterattack. Heavy fighting was raging as the 10th RWF moved into the fray on 28 March, moving into recently captured German trenches, consolidating its positions on the following day before launching an assault against the German second lines on 30 March 1916. Albert was killed in action during the fighting that day. The 28-year-old has no known grave and is commemorated on the Ypres (Menin Gate) Memorial, Belgium. Albert was the first of the three Phillips brothers to be killed during the war. 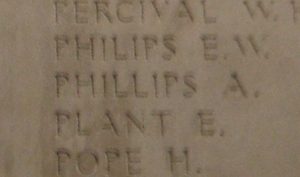 George Phillips, Able Seaman, R/1814, Royal Naval Volunteer Reserve. George was born on 16 March 1898, the youngest of three sons of Lewis and Annie Phillips, of Criggion. He enlisted into the army on 6 June 1916 and was initially placed on the Army Reserve. He was mobilised on 14 June 1917 and was posted to the Royal Naval Volunteer Reserve. At the outbreak of war, it was found that there were more Royal naval Reservists than there were ships for them to serve on, so the Admiralty decided to create a Royal Naval Division to fight on land, utilising this surplus manpower. As a result, after completing his training, George was drafted to France on 30 October 1917 and joined Hood Battalion, Royal Naval Volunteer Reserve. The battalion was attached to the 63rd (Royal Naval) Division and was holding a section of the line on Passchendaele Ridge taking part in the latter actions of the Third Battle of Ypres. To the south the Allies were heavily engaged during the Battle of Cambrai and had initially broken through the much-vaunted Hindenburg Line, however a German counter-offensive on 30 November regained much of the lost ground and as a result, the 63rd Division was relieved from the Ypres Salient early in December and moved south to help bolster the Allied lines at Metz. The Division then saw heavy fighting during the Action of Welch Ridge on 30 December when the Germans attacked their lines following an intense artillery bombardment. The 63rd Division held on, despite heavy losses, before settling down for the winter in the same trenches and its battalions began the usual routines of trench rotation over the coming weeks. On 21 March 1918 the Germans launched a great offensive along a section of the Western Front which ran south from Croisilles to La Fère and broke through the British lines in several places. Hood Battalion was in support trenches at Havrincourt Wood when the Germans hit and soon received orders to ‘Stand To’. The battalion took over the second line positions at Trescault alongside the Artists Rifles and came under attack by gas shells before being hit by the advancing German infantry. George was wounded and taken prisoner at some time afterwards, during a desperate period of fighting. He was eventually incarcerated in Goettingen POW Camp at Lazarette. George died in captivity at Goettingen on 18 November 1918, probably due to ill health. He was originally buried in Goettingen Military Cemetery, but on 30 October 1923 the military burials in the cemetery were exhumed and re-buried in Niederzwehren Cemetery, Cassel, Germany. George was the last of the three Phillips brothers to die during the war.

Thomas James Phillips, Private, 24643, King’s Own Yorkshire Light Infantry. Thomas was born in 1893, the second of three sons of Lewis and Annie Phillips, of Criggion. He enlisted into the army in June 1915 and after completing his training was drafted to France, joining the 2nd Battalion, King’s Own Yorkshire Light Infantry, which was attached to 97 Brigade, 32nd Division. Thomas was wounded during the Battle of the Somme in July 1916 and was eventually evacuated back to Britain, spending four months in hospital before being discharged. He was drafted back out to France in May 1917, re-joining the 2nd Battalion, King’s Own Yorkshire Light Infantry, which was by then at Voyennes rebuilding following heavy losses during the Battle of Arras. Mid-way through May the battalion moved to Berteaucourt to carry out a system of training before moving to Villers-Bretonneux at the end of the month. On 1 June the entire 32nd Division entrained for Flanders, reaching Steenbecque on the following day before marching via Merville and Neuf Berquin to a new sector, facing Messines and Wytschaete. The Division now came into reserve for a meticulously planned assault against the Messines Ridge. The battle began at dawn on 7 June 1917, following the blowing of a series of vast underground mines below German strongpoints along the ridge, and was followed up by a massed infantry assault, supported by tanks. The 32nd Division was not needed as the ridge was successfully captured and moved to the Eecke area to continue its training. On 26 June the Division took over the Lombardzyde Sector, near Nieuwpoort on the Channel coast, to prepare for a possible offensive which was to occur should the Passchendaele offensive bear fruition. The Passchendaele offensive, or Third Battle of Ypres, was launched on 31 July 1917 but despite initial gains became bogged down in the thick Flanders mud. The coastal offensive was called off due to the failure of the Allies to make a breakthrough at Ypres and in the middle of November the 32nd Division began moving into the Ypres Salient. Thomas took ill soon after arriving at Ypres and was evacuated to a Casualty Clearing Station near Proven where he died of pneumonia on 29 November 1917. The 27-year-old was buried in Haringhe (Bandagham) Military Cemetery, Belgium. Thomas was the second of the three Phillips brothers to fall during the war.

Frank Williams, Private, 7465, 20th Hussars. Frank was born in 1893, the son of Edward and Priscilla Williams, of New Town Lane, Crew Green, Ford. He worked as a waggoner on a farm at Leighton prior to enlisting at Welshpool into the 20th Hussars prior to the war. The 20th Hussars were at Colchester when war was declared and soon afterwards embarked for France with the 5th Cavalry Brigade. The brigade joined the BEF at the Belgian frontier and took part in the Battle of Mons on 23–24 August, and then in another action at Cerizy, before taking part in the epic Retreat from Mons. The BEF reached the River Marne by 5 September and on the following day took part in the Battle of the Marne, where the BEF helped stop the German drive on Paris. On 6 September, the 5th Cavalry Brigade joined the 3rd Cavalry Brigade under the command of General Sir Hubert Gough and took part in the Battle of the Aisne, in an action which forced the Germans back onto the Chemins-Des-Dames ridge. General Gough’s Command was then bolstered with additional units, before being redesignated as the 2nd Cavalry Division and moved to Ypres with the rest of the BEF to put a defensive wall around the strategically important city. Frank was killed in action at Ypres during the Battle of Gheluvelt, on 30 October 1914. The 21-year-old has no known grave and is commemorated on the Ypres (Menin Gate) Memorial, Belgium. Frank was the first man from Criggion to be killed during the war.