Bettws Cedewain is a small village and community in Montgomeryshire, which lies in a sheltered valley on the banks of the Nant Bechan, some three miles north of Newtown, on the B4389 road. The community is known as just Bettws, and includes the hamlets of Highgate and Brooks. Within the village is the ancient church of Saint Beuno, which was reputedly founded in the 6th century. The men of the village who fell during the Great War are commemorated on a simple wooden war memorial located within the Church.

Cecil Ewart Griffiths, Private, 285129, Monmouthshire Regiment. Cecil was the son of Henry and Jane Griffiths, of The Cottage, Pentre Llivior, Berriew. He was a golf professional prior to the war. Cecil enlisted into the 7th Battalion, Royal Welsh Fusiliers at Newtown on 5 October 1914. The battalion was a Territorial unit, which mobilised for war at Newtown in August 1914, as part of North Wales Brigade, Welsh Division and moved to Conway until the end of the month, before moving to Northampton. In December the Division moved to Cambridge and then in May 1915 to Bedford, where the Division was numbered and the formation became 158 Brigade, 53rd (Welsh) Division. On 19 July 1915 the entire Division sailed from Devonport for Imbros and on 9 August 1915 landed at Suvla Bay. The infantry moved off the beaches into the bush, but due to a lack of maps and no knowledge of the terrain, many of the units became disorientated, and the situation became chaotic. Once the fighting dies down, the troops became bogged down into a stalemate, but as winter came conditions became abysmal, with torrential rain followed by snow. Cecil became ill, suffering from exposure, and was evacuated off the Peninsula in November, being taken to Malta before being sent home on the Hospital Ship Carisbrook Castle and was taken to the 2nd Western General Hospital in Manchester, where he was treated for trench feet and rheumatism. After recovering from his ill health, Cecil embarked at Southampton for France on 13 June 1917 and was sent to the Infantry Base Depot at Rouen. On 24 June he was transferred to the 1st Battalion, Monmouthshire Regiment, but was then posted to B Company, 2nd Battalion, South Wales Borderers. The battalion was attached to 87 Brigade, 19th (Western) Division and had suffered terrible losses during the Battle of Arras. Cecil joined the battalion on the Canal Bank at Boesinghe, where the Division had relieved the 38th (Welsh) Division temporarily, so that it could train for the forthcoming Third Battle of Ypres. He joined the battalion at L Camp, in Crombeek Wood on 12 July. The battle opened on 31 July 1917, and the 29th Division remained in reserve while the initial assaults took place. On 14 August the 2nd SWB moved into support positions near Saules Farm, and forded the flooded Steenbeek on the following night, before readying to assault Langemarck. At 04.45 on 17 August 1917 the 2nd SWB assaulted the strongly held ruins of Langemarck, capturing all its objectives and taking a large number of prisoners and munitions. Cecil was badly wounded during the assault, suffering gunshot wounds to his face, and was invalided back home over the coming days to the 5th Northern General Hospital at Leicester. He died there of severe wounds to his face and septicaemia on 25 August 1917, aged 23. His remains were conveyed home, and Cecil was buried in St. Beuno’s Churchyard, Bettws Cedewain, four days later.

Percy Jones, Private, 39039, South Wales Borderers. Percy was the son of Evan and Martha Ellen Jones, of Bettws Smithy, Bettws Cedewain. He enlisted at Newtown into the 7th Battalion, Royal Welsh Fusiliers soon after the outbreak of war and was posted to Park Hall, Oswestry to join the 3/7th Battalion, Royal Welsh Fusiliers. After completing his training was posted to Salonika in the summer of 1917, where he was transferred to the 7th Battalion, South Wales Borderers. The battalion was attached to 67 Brigade, 22nd Division and had been in Salonika since November 1915. The Salonika front had opened following the invasion of Serbia by a combined Austro-Hungarian offensive which had pushed the Serbian army back over the Greek border. As a response, an Anglo-French force was sent out to hold the border in the Salonika region. Percy was wounded during a routine spell in the trenches at Salonika in June 1918 and died of his wounds on 6 June 1918, aged 19. He is buried in Sarigol Military Cemetery, Kriston, Greece.

Christmas Gordon Lewis, Gunner, 218845, Royal Garrison Artillery. Christmas was the son of Richard and Mary Lewis, of Ucheldre Brook, Berriew. He worked as a farm bailiff at Moat Farm, Manafon, Berriew prior to enlisting into the Royal Garrison Artillery at Wrexham on 3 June 1918. Christmas was then posted to the 3rd S.A. Brigade at Prees Heath Camp, near Whitchurch for training. He took ill soon after arriving in camp and was taken to Prees Heath Military Hospital, where he died of pleurisy on 23 June 1918, aged 22. His remains were brought home for burial in Gerizim Calvinistic Methodist Chapelyard, Tregynon.

John Lawton Owens, Corporal, 39046, South Wales Borderers. John was the son of David and Mary Jane Owens, of Cwmberllan, Sarn. He enlisted at Newtown into the 7th Battalion, Royal Welsh Fusiliers, and after completing his training was posted to France in the summer of 1917, where he was transferred to the 1st Battalion, South Wales Borderers. The battalion was attached to 3 Brigade, 1st Division, and John joined it at Coxyde, where the Division was preparing for a possible offensive along the Flanders coast. The Division remained here over the coming months, but when the Passchendaele offensive became bogged down, the coastal offensive was called off, and the 1st Division was transferred to the Ypres Salient in November. The Division took over positions to the south of the Houthulst Forest, and on 11 December the 1st SWB moved into the front line here for the first time, beginning a routine spell in the trenches. The men relieved the 1st Black Watch, and found that there was no trench-line, but merely a series of shell-holes, and conditions were abysmal. John was killed in action here on the following day, 12 December 1917. The 22-year-old has no known grave and is commemorated on the Tyne Cot Memorial, Belgium. 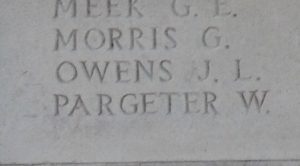