Llandecwyn is a hamlet near Penrhyndeudraeth, in the ancient county of Merionethshire, near to the A496 road. The community contains an ancient church, which is dedicated to St. Tecwyn, and also had four Chapels: Llenyrch Methodist Chapel (now closed); Capel Newydd (now ruined); Capel Bach (now closed); and Bryn Tecwyn Chapel, which is also closed. The community War Memorial is situated outside the latter, Bryn Tecwyn Chapel, and commemorated the six men of the area who fell during World War One. 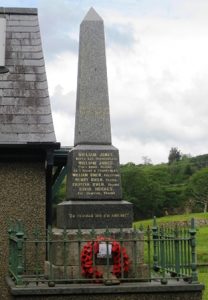 David Hughes, Private, 20297, Royal Welsh Fusiliers. David was the son of John and Jane Hughes, of Tyn Llan, Llandecwyn. He married Ellen Roberts on 18 October 1910, and the couple lived at Tyn Llan. David worked as a Masons Labourer prior to enlisting into the 14th Battalion, Royal Welsh Fusiliers at Penrhyndeudraeth soon after the outbreak of war. The battalion was raised at Llandudno by the Welsh National Executive Committee, as part of 128 Brigade, 43rd (Welsh) Division. On 29 April 1915 the formation became 113 Brigade, 38th (Welsh) Division, and in August 1915 the entire Division moved to Winchester for final training before moving to France from 2 December 1915. The entire Division moved to the Fleurbaix sector, where it was initiated into trench warfare. During June 1916 the Division marched south to the Somme, and on 7 July 1916 attacked Mametz Wood. The initial attack failed, and it was three days later, on 10 July, that a fresh attack was mounted. After two days of heavy hand to hand fighting within the wood, the Germans withdrew, and the battered Welshmen moved via Hébuterne to Boesinghe, on the Yser Canal. David was wounded here during October 1916, and was evacuated back to Britain for treatment. Upon his recovery he was posted back to France, re-joining the 14th Battalion, Royal Welsh Fusiliers. It is unknown if David took part in the Divisions assault on Pilckem Ridge on 31 July 1917, but by 1918 David had been transferred to the 2nd Battalion, Royal Welsh Fusiliers, which had been attached to 115 Brigade, 38th (Welsh) Division in February 1918. The Division then moved south to the Somme, relieving the battered 2nd and 47th Divisions in the line north of Albert, at Bouzincourt Ridge, holding this sector before launching its assault across the flooded Ancre Valley on 21 August 1918. Over the coming weeks the Division advanced across the old Somme battlefields towards the Hindenburg Line, and once the line was broken, took part in the advance towards the frontier. On 4 November 1918 the Division attacked the edge of the village of Englefontaine and the Forest of Mormal, its last major offensive of the war. David was killed in action that day, fighting in the wood. He was 32 years old and is buried in Romeries Communal Cemetery Extension, France. 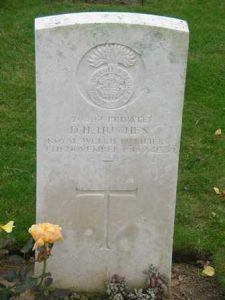 William Jones, Corporal, 334, Royal Welsh Fusiliers. William was the son of William and Catherine Jones, of Llandecwyn. He married Elizabeth Morris in 1908 and the family moved to Penybryn, Penrhyndeudraeth, with their four children. William enlisted at Criccieth into the 1/6th Battalion, Royal Welsh Fusiliers. The battalion was a Territorial unit, which mobilised for war at Carnarvon in August 1914, as part of North Wales Brigade, Welsh Division and moved to Conway until the end of the month, before moving to Northampton. In December the Division moved to Cambridge and then in May 1915 to Bedford, where the Division was numbered and the formation became 158 Brigade, 53rd (Welsh) Division. On 19 July 1915 the entire Division sailed from Devonport for Imbros and on 9 August 1915 landed at Suvla Bay. The infantry moved off the beaches into the bush, but due to a lack of maps and no knowledge of the terrain, many of the units became disorientated, and the situation became chaotic. William survived this initial chaos, but became wounded later in the campaign, and died of his wounds in hospital at Alexandria on 20 December 1915, aged 31. He is buried in Alexandria (Chatby) Military & War Memorial Cemetery, Egypt.

William Jones, Private, 13759, King’s Shropshire Light Infantry. William was the son of Robert and Jane Jones, of Tynybone, Talsarnau. He worked as a Slate Quarryman prior to moving to the South Wales Valleys to find work, and lived in Maesteg prior to the war. William enlisted at Maesteg into the 7th Battalion, King’s Shropshire Light Infantry soon after the outbreak of war. The battalion was raised in Shrewsbury, before joining 76 Brigade, 25th Division at Codford, Salisbury Plain. During November 1914 the battalion moved to billets at Bournemouth, then moved via Romsey to Aldershot before landing at Boulogne on 28 September 1915 and the 25th Division moved to the Ypres Salient. Two weeks later 76 Brigade transferred to the 3rd Division, which was also at Ypres. The 7th KSLI saw its first major fighting during the Actions of the Bluff, a mound near St Eloi, south-east of Ypres, which was created from a spoil heap during the digging of the Ypres–Comines Canal before the war. Fighting for control of the Bluff raged from 14 to 15 February and again on 2 March 1916, and once that had calmed down the 3rd Division took part in the actions at the St Eloi Craters, from 27 March to 16 April 1916, when the British blew six mines under the German line and fought to take the mine craters. The Division was then moved south to the Somme during the first week of July 1916. The 7th KSLI had reached Carnoy by 8 July, and on 14 July 1916 the Division launched an assault towards High Wood. The 7th KSLI was held up by German barbed wire, and got caught by heavy machine-gun fire, suffering over 450 casualties during the day, over half its strength. William was 22 years old when he was killed that day. He has no known grave and is commemorated on the Thiepval Memorial, France.

Griffith Owen, Private, 60045, Welsh Regiment. Griffith was the son of Griffith and Elizabeth Owen, of Penbrynlas, Talsarnau. He worked as a farm servant at Gartheli and married Elizabeth Daniel, of Maesyfforest, Llangybi, on 26 May 1916. Griffith enlisted at Lampeter into the army, and was posted to France early in 1918, joining the 13th Battalion, Welsh Regiment, which was attached to 114 Brigade, 38th (Welsh) Division. Griffith possibly joined the division at Armentieres, at around the time of its move to the Somme in April 1918. The division took up the line north of Albert, facing the valley of the River Ancre, and from here launched its famous assault across the Ancre on 21 August 1918, which began its part in the advance to victory. Over the coming days the Division advanced across the old Somme Battlefields, towards the mighty Hindenburg Line, taking Mametz Wood and Delville Wood, then crossing the Canal du Nord. On the morning of 18 September 1918, as part of the overall Battle of Épehy, the 13th Welsh took part in the Divisions assault on the German held village of Gouzeaucourt, tasked with capturing African Trench and Heather Trench. Griffith was killed in action during the assault that day. The 27-year-old has no known grave and is commemorated on the Vis-en-Artois Memorial, France. His brothers, Harry and William, also fell. 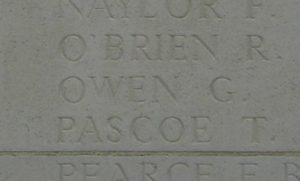 Harry Owen, Private, 42367, South Wales Borderers. Harry was the son of Griffith and Elizabeth Owen, of Penbrynlas, Talsarnau. He had moved to South Wales by 1901 to work as a coal haulier, for John Evans, of Graig Wen Farm, Abertridwr. Harry enlisted at Porth into the Army Service Corps, but early in 1917 was transferred into the 2nd Battalion, South Wales Borderers. The battalion was attached to 87 Brigade, 29th Division and had seen heavy fighting on the Somme the previous summer. During the Spring of 1917, the 29 Division took part in the Battle of the Scarpe, which was part of the Arras Offensive. It then moved north to Ypres and fought at the Battle of Langemarck. The Division took part in further fighting at Ypres before being moved south to the Cambrai Sector by 17 October, to take part in the Battle of Cambrai. The Division remained in the Bellacourt area for several weeks, before marching to Fins by 19 November and assembling in the Gouzeaucourt area. The Division took part in heavy fighting around Marcoing and Masnieres on the following day, and on the 21st attacked alongside a number of tanks. Fighting continued in the area over the coming days, and on 30 November the Germans counter-attacked. Harry was killed in action near the canal at Marcoing on 3 December 1917, aged 34. He is buried in Flesquières Hill British Cemetery, France. His brothers, Griffith and William, also fell.

William Owen, Private, 267281, Royal Welsh Fusiliers. William was the son of Griffith and Elizabeth Owen, of Penbrynlas, Talsarnau. He worked as a Labourer prior to enlisting at Penrhyndeudraeth into the 6th Reserve Battalion, Royal Welsh Fusiliers on 12 December 1915, and was placed on the Army Reserve. On 9 June 1916 William was mobilised, and was posted to Bedford, joining the 2/6th Battalion, Royal Welsh Fusiliers. After completing his training, William embarked for Egypt on 12 December 1916, and joined the 1/6th Battalion, Royal Welsh Fusiliers, which was on the Suez Canal, attached to 158 Brigade, 53rd (Welsh) Division. The Division had been evacuated from Gallipoli in December 1915, moving to Egypt to join the EEF, and helped guard the Suez Canal before taking part in operations to drive the Turks out of the Sinai. The EEF then turned its attention onto driving the Turks out of Palestine, and on 26 March 1917 launched its first offensive against the coastal city of Gaza, which guarded the road to Jerusalem. Initial gains during the day were lost when the assaulting divisions lost touch with each other and communication broke down when a thick fog cloaked the battlefield. A second assault on Gaza was launched on 17 April, but again failed, so the EEF suffered a change in command, with Sir Edmund Allenby taking over, and was re-organised before a third assault, on a broader front, was launched on the night of 1-2 November 1917. William was killed in action during the drive north from Beersheba on 4 November 1917, aged 22. He is buried in Beersheba War Cemetery, Israel. His brothers, Griffith and Harry, also fell. 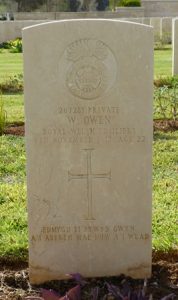