Llangennith is a village in Gower, which had built up around a central village green and the church of St. Cenydd, which was founded in the 6th century. Its early buildings were destroyed by the Vikings, and todays building dates from 1102, when it was built by a Norman Lord. In the churchyard sits a war memorial, in the form of a Celtic Cross, which commemorates the men of Llangennith who fell during both world wars. 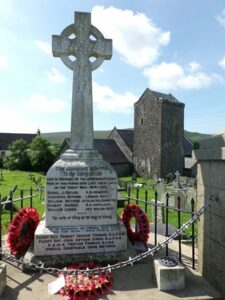 Augustus Beynon, Private, 6193, London Regiment. Augustus was the son of John and Elizabeth Beynon, of Cock Street Farm, Llangennith. He worked as a draper in Swansea prior to enlisting in Merthyr into the 2nd/19th Battalion, London Regiment, which was attached to 180 Brigade, 60th Division. Augustus landed at Le Havre with the battalion on 24 June 1916, and it entrained for the Mont-St. Eloi sector. The divisions first experience at the front was in the Arras district, where it was initiated in trench warfare by the 51st (Highland) Division, before the latter moved south to take part in the Somme offensive. The 60th Division remained in the Arras sector for several months, and it was there, during a routine spell of trench warfare, that Augustus was killed on 15 October 1916. The 32-year-old is buried in grave III. H. 4. in Ecoivres Military Cemetery, Mont-St. Eloi, France.

William Beynon, Private, 320616, Welsh Regiment. William was the son of Charles and Elizabeth Beynon, of Llandimore, Gower. He worked as a farm labourer prior to enlisting into the Glamorgan Yeomanry. The regiment embarked for Norfolk soon after the outbreak of war where it worked alongside the Pembroke Yeomanry on coastal defence. During March 1916 the Yeomanry moved to Egypt, where it merged with the Welsh Border Mounted Brigade and formed the 4th Dismounted Brigade. On 2 February 1917 it merged with the 1/1st Pembroke Yeomanry to form the 24th Battalion, Welsh Regiment, and became attached to 231 Brigade, 74th (Yeomanry) Division. The Division had formed in Egypt in January 1917 and had fought through the Palestinian Campaign, at the Battles of Gaza and the Battle and capture of Jerusalem. Due to the terrible casualties suffered by the British on the Western Front in March and April 1918 the Division was recalled to the Western Front, and arrived at Marseilles during May 1918. They then fought at the Second Battle of Bapaume during the great offensive, and fought in Flanders before returning to the Somme and fighting at the Battle of Epéhy, as part of the offensive towards the Hindenburg Line. The division then moved north and took part in the final advance in Artois, and had pushed towards Belgium, being stationed in Ath at the Armistice. William died at the 32nd Casualty Clearing Station on 13 October 1918, aged 25, and is buried in grave X. E. 14. in Lapugnoy Military Cemetery, France. 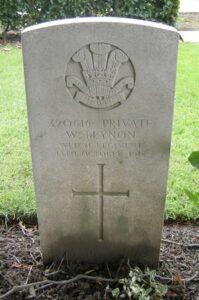 William Lucas, Private, 29217, Welsh Regiment. William was the son of Charles and Ann Lucas, of Bury Head, Reynoldston. He enlisted at Swansea into the Welsh Regiment, and was posted to the 14th Battalion, Welsh Regiment, known as the Swansea) Pals battalion, which was attached to 114 Brigade, 38th (Welsh) Division. On 2 December 1915 the battalion moved to France, and the entire Division moved to the Fleurbaix sector, where it was initiated into trench warfare. During June 1916 the Division marched south to the Somme, and on 7 July 1916 attacked Mametz Wood. The initial attack failed, and it was three days later, on 10 July, that a fresh attack was mounted. After two days of heavy hand to hand fighting within the wood, the Germans withdrew, and the battered Welshmen moved via Hébuterne to Boesinghe, on the Yser Canal, where it remained until launching its attack on Pilckem Ridge on 31 July 1917. The 15th Welsh remained in the line, and also took part in the Battle of Langemarck, before the entire Division was moved to positions near Armentieres over the winter. After the Germans launched their offensive on the Somme on 21 March 1918, the Division was moved back to the Somme, and took up positions north of Albert, around Aveluy Wood from which it launched its assault across the flooded Ancre valley on 21 August 1918, taking part in the 100 days offensive which broke the Hindenburg Line and ultimately won the war. William survived the war, being discharged class Z on 8 June 1919. He died at Llangennith in the winter of 1919, aged 23 and is buried in Llanddewi (St. Davids) Churchyard, Gower. William is not commemorated by the CWGC.

Daniel James Taylor, Able Seaman, 201149, Royal Navy. Daniel was the son of James and Mary Taylor, of Well Cottage, Llangennith. He married Charlotte Annie Taylor at Llangennith in 1908 and the couple lived at Glen View, Reynoldston. He enlisted into the Royal Navy and was posted aboard the Drake Class Armoured Cruiser, HMS Good Hope, which had been mothballed in 1913. She was quickly refitted for war, and joined the 6th Cruiser Squadron. Due to the belief that German Merchant Vessels were being converted into Armed ships, the Admiralty diverted Good Hope to reinforce Craddock’s force in the Atlantic, and she left Portsmouth on 2 August 1914 under the command of Captain Philip Francklin. Craddock transferred his flag to her on her arrival at Halifax, Nova Scotia because she was faster than his current flagship HMS Suffolk. For the next few weeks she was employed protecting British merchant shipping as far south as Pernambuco and later the Falkland Islands. She then embarked on the search for the German East Asiatic Squadron, leaving Stanley on 22 October for the west coast of South America via Cape Horn. She was sunk along with HMS Monmouth by the German armoured cruisers Scharnhorst and Gneisenau under Admiral Graf Maximilian von Spee with the loss of her entire complement of 900 hands, in the Battle of Coronel, on 1 November 1914, off the Chilean coast. Daniel was 33 years old when he died that day, and is commemorated along with his ship-mates on panel 2 of the Portsmouth Naval Memorial, Hampshire. He had seen service on the China Station before the war and had been awarded the China Medal, 1900.

John Beynon, Special Constable, Glamorgan Constabulary. John was the son was the son of Charles and Elizabeth Beynon, of Llandimore, Gower. He married Doris Louisa Ace in 1925. John served as a Special Constable during the war and died on Llangennith Beach on 22 January 1944, aged 47. He is buried in Llangennith Churchyard. His brother, William Beynon, was killed in the Great War in 1918. John is not commemorated as a casualty by the CWGC.

John Arthur Gibbs, Flight Sergeant, 1338451, Royal Air Force Volunteer Reserve. John was the son of George Beynon Gibbs, of Highbury, Llangennith. He enlisted into the Royal Air Force Volunteer Reserve and was posted to 578 Squadron, Royal Air Force, which was formed at RAF Snaith, East Riding of Yorkshire on 14 January 1944, equipped with Halifax III bombers. On 23 April 1944 John was flying aboard Halifax MZ518 which was on a raid ordered to bomb Dusseldorf, when it was brought down and crashed on the bank of the Rhine. John escaped the crash and was taken prisoner in camp L6/357. On 19 April 1945 John was among a large number of RAF POW’s on a route march, escorted by German guards, when the column was spotted by a pilot in an RAF Typhoon who mistook them for enemy troops and fired rockets and cannon fire into the group, unwittingly killing over 60 of his RAF colleagues. John was among the dead. The 23-year-old is buried in grave 6. B. 13. in Berlin 1939-1945 War Cemetery, Germany. 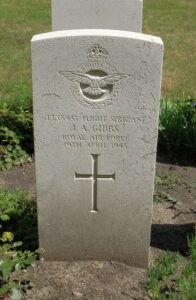 Trevor Thomas, Warrant Officer II, 401762, Royal Army Pay Corps. Trevor was the son of George Llewellyn Thomas and Ellen Thomas, of Swansea and the husband of Isabella Stevens (Bella) Thomas, of Llangennith. He served with the Royal Army Pay Corps in India. Little is presently known of him, but he died in India on 27 November 1942, aged 39, and is buried in grave 7. L. 3. in Delhi War Cemetery, India.

Robert George Thorne, Flight Sergeant, 1266197, Royal Air Force Volunteer Reserve. Robert was the son of Theophilus Marmaduke Thorne and Emily Maud Thorne (nee Dudden), of Cwmdu, Swansea. He enlisted into the Royal Air Force Volunteer Reserve and was posted to 7 Squadron, Royal Air Force, which was a pathfinder unit, equipped with the Short Sterling heavy bomber, based at RAF Oakington. On the night of 8 March 1943 Robert took off from Oakington aboard Sterling I, Serial BK610, as part of a large force despatched to bomb Nuremburg. Robert was killed when his Sterling went missing on the following morning of 9 March 1943, with the loss of all her crew. The 21-year-old has no known grave and is commemorated on panel 139 of the Runnymede Memorial, Surrey.