Partrishow, or Merthyr Isiw, is a small village in the historic county of Breconshire, close to its border with Monmouthshire. It is in the valley of the Grwyne Fawr, in the Black Mountains, within the Brecon Beacons National Park. The village is noted for its 11th-century Church, which is dedicated to St Issui. One local man from the village who died during the Great War is commemorated on the recently erected Crickhowell and District war memorial. I have also added the details of a second man with local ties. 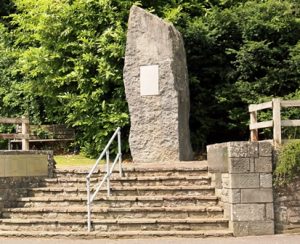 Thomas John Bevan, Driver, 195151, Royal Engineers. Thomas was born on 15 July 1896, the son of William David Bevan and Mary Margaret Bevan (nee Powell), of Gelliwellteg, Partrishow. By 1911 the family had moved to New Inn, Fwthog, Cwmyoy. Thomas worked on his parents farm prior to the war. He enlisted into the Royal Engineers at Abergavenny and was posted to East Africa to join the Base Signal Depot. Thomas had not been in Africa long when he contracted enteric fever, and he died in Dar Es Salaam, Tanzania on 16 May 1917. The 20-year-old was originally buried in Ocean Road Cemetery, Dar Es Salaam, but after the war his grave was exhumed, and he was reinterred in Dar Es Salaam War Cemetery. Thomas is commemorated in Salem Presbyterian Chapel, Forest Coalpit and on his parents’ gravestone at Cwmyoy church. His is the sole name under Partrishow on the Crickhowell and District war memorial.

Iain Rose Paterson, Second Lieutenant, Cameron Highlanders. Iain was born in 1898, the son of Doctor Donald Rose Paterson, MD, and of Constance Mary Paterson (nee Baker-Gabb), of 15, St. Andrew’s Crescent, Cardiff. His mother was the daughter of Richard Baker-Gabb, of Abergavenny and Partrishow, and young Iain and his siblings spent a lot of their childhood in the area. Upon leaving school Iain entered Cambridge University and was studying medicine there when war broke out. Iain left his studies in 1916 to enlist into the Honourable Artillery Company, then gained a commission as Second Lieutenant into the 3rd Battalion, Cameron Highlanders. He was drafted to France in the summer of 1917, joining the 5th Battalion, Cameron Highlanders, which was attached to 26 Brigade, 9th (Scottish) Division. The division was still in positions facing the Hindenburg Line when Iain arrived in France, then in the second week of September began entraining at Albert for the Ypres Salient, to join the great offensive for Passchendaele Ridge. The 5th Cameron Highlanders marched to a tented camp at Brandhoek, then on 17 September moved to Toronto Camp prior to the division taking over positions near Frezenberg Ridge, to support operations southwest of Zonnebeke. After a brief spell in the line here, the battalion was relieved on 24 September and moved back to Vlamertinghe, before the division moved to the Wormhoudt area to carry out specialist training. Upon its return on 8 October, the division took over new positions near Poelcapelle, to take part in the assault on Passchendaele Ridge. At dawn on 12 October, 26 Brigade launched its assault, with the 8th Black Watch and the 10th Argyll & Sutherland Highlanders forming the first wave. The 7th Seaforths and the 5th Cameron Highlanders were in support. The ground was by now in a horrific state, ploughed up by constant artillery fire and waterlogged due to the drainage ditches being destroyed, so the first wave lost direction. The divisions on the left and right flanks also became held up and the attack was in dire straits by the time that the 7th Seaforths and the 5th Cameron Highlanders took up the advance. Iain was killed in action whilst his battalion was attempting to capture a pillbox that day, 12 October 1917. The 19-year-old has no known grave and is commemorated on the Tyne Cot Memorial, Belgium. Iain is not commemorated locally.