Llansantffraed is a small village situated in the ancient county of Breconshire, near to the larger settlement of Talybont-on-Usk. The men of the village who fell during both World Wars are commemorated on two war memorial plaques, which are situated inside the Parish Church of St. Cattwg. The names of these men were later added to the war memorial in the nearby village of Cross Oak. 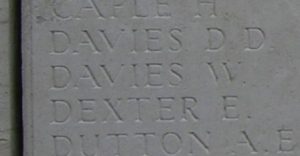 Walter James Meager, Rifleman, 6380, Rifle Brigade. Walter was born in Norwood, Surrey in 1884, the son of William Meager and Annie Meager (nee Baker). He enlisted into the Rifle Brigade as a young man and served for several years before leaving the army and becoming an Army Reservist. Walter returned to London where he found work as a carman. He married Frances Ellen Winnals on 15 September 1907 and the couple initially set up home at 28, Paxton Place, Hamilton Road, West Norwood. The couple then moved to Wales and resided at Llansantffraed for a while before leaving the country and emigrated to Australia in April 1912, settling at Inkermann Street, Granville, Sydney. Following the outbreak of war, Walter left Australia aboard the SS Militiades on 17 October 1914 and returned to England, where he re-joined his old regiment, the Rifle Brigade. Walter was then drafted to France on 26 January 1915, joining the 2nd Battalion, Rifle Brigade, which was in the Neuve Chapelle sector and was attached to 25 Brigade, 8th Division. The division saw its first major action at the Battle of Neuve Chapelle, which opened on 10 March 1915 and raged for three days, advancing through the village and capturing a number of prisoners in an action which saw CSM Harry Daniels of the 2nd Rifle Brigade gain the award of the Victoria Cross. The 8th Division remained in the area over the coming weeks, then on 9 May 1915 took part in another major action, the Battle of Aubers Ridge. The 2nd Rifle Brigade assembled together with the other attacking battalions of the division and charged across No Mans Land that morning to find the barbed wire uncut, due to inadequate artillery fire. Walter was killed in action during the ensuing fighting that day. The 31-year-old has no known grave and is commemorated on the Ploegsteert Memorial, Belgium.

William Francis Morris, Gunner, W/2198, Royal Field Artillery. William was born in 1898, the son of William Morris and Mary Ann Morris, of the Farmers Arms, Llansantffraed. He worked as a porter for the GWR at Resolven prior to the enlisting into the newly formed Welsh Divisional Royal Field Artillery soon after the outbreak of war. The 43rd (Welsh) Division had been formed as part of a planned Welsh Army Corps, but due to a lack of men, only the one division was formed. The units of the Division trained in North Wales before moving to Salisbury Plain in the summer of 1915, where the Division was renumbered to the 38th (Welsh) Division and William joined A Battery, 122nd Brigade, Royal Field Artillery within the Division. He embarked for France with the Battery on 24 December 1915 and the entire Division moved to the to the Nursery Sector near Fleurbaix for trench initiation alongside the Guards Division. The Division then held a sector of the line near Cuinchy before marching south to the Somme sector in June 1916 to take part in the assault on Mametz Wood. The first attack on the wood was launched on a two-battalion front on 7 July, but failed, and the Divisional Commander, Sir Ivor Philipps, was replaced before the Division attacked again on a two Brigade front on 10 July 1916. After two days of ferocious hand-to-hand fighting, the wood was cleared up to its northern edge, before the battered Division was relieved. It then took over a section of the front at Hébuterne before moving to the Ypres Salient and taking over the Canal Bank sector at Boesinghe. The infantry battalions of the Division then began carrying out the normal pattern of rotation in the trenches, four days in the front, four in support and four in reserve, whilst also working on trench improvement, digging new trenches, and carrying out regular patrols and trench raids. The Division was to take part in the opening assault of the Third Battle of Ypres, or Passchendaele, which was to be launched on 31 July 1917. During the build up to the offensive, the Divisional artillery was kept busy targeting key German positions facing the Division. William was gassed during the build up to the battle and was evacuated to the Casualty Clearing Station at Mendinghem where he died of pneumonia on 27 July 1917 because of his gassing. The 19-year-old is buried in Mendinghem Military Cemetery, Belgium.

Ernest O’Dell, Rifleman, 5095, Royal Irish Rifles. Ernest was the son of John William O’Dell and Eliza O’Dell (nee Weatherley), of 116, Welldon Crescent, Harrow. He came to work at Bwlch as a young man but following the outbreak of war enlisted at Marylebone into the Lancers. Ernest was then drafted to France on 30 June 1915 and was transferred to the 2nd Battalion, Royal Irish Rifles, which was attached to 7 Brigade, 3rd Division at Ypres. On 18 October the entire Brigade transferred to the 25th Division, which was at Le Touquet, having arrived in France the previous month, and the following week the 2nd Royal Irish Rifles transferred to 74 Brigade, in the same 25th Division. The Division wintered in the Le Touquet area and during March 1916 was posted to positions at La Targette in the Vimy Sector, north of Arras. By 10 May the 2nd Royal Irish Rifles was in positions at Zouave Valley and Cabaret Rouge, in Brigade Reserve. On 15 May the Germans shelled the area before firing two huge underground mines in front of the battalion. Men of the 11th Lancashire Fusiliers rushed forwards to consolidate the new craters and the 2nd Royal Irish Regiment helped consolidate the new positions over the following day. At dawn on 17 May 1916 the battalion was holding its new positions when the line was bombarded again by German artillery and was followed by an assault by German infantry. Heavy fighting raged throughout the day but due to heavy losses the Germans captured the craters. Ernest was killed in action during the fighting that day. The 27-year-old has no known grave and is commemorated on the Arras Memorial, France.

William John Powell, Guardsman, 3012, Welsh Guards. William was born in 1885, the son of William Powell and Jennet Powell (nee Williams), of Trosnant Cottage, Cantref. He worked as a waggoner at Lower Cantref Farm, Sennybridge prior to the war. William enlisted at Brecon into the Welsh Guards in the summer of 1915 and at some time in 1916 was drafted out to France to join the 1st Battalion, Welsh Guards. The Division had seen its first major action during the Battle of Loos, which began on 25 September 1915, remaining in the area during the coming months, where it also fought in the subsequent Action of Hohenzollern Redoubt. In July 1916 the Division moved to the Somme, where it fought at the Battle of Flers-Courcelette, and then at the Battle of Morval, capturing Lesboeufs Village. The division remained here for the winter, and in March 1917 took part in the advance caused by the German Retreat to the Hindenburg Line. William was wounded by a German gas bombardment around this time and was evacuated home to Britain for treatment at Queen’s Hospital in Birmingham. He died of his gas wounds there on 17 May 1917. The remains of the 31-year-old were brought home and he was buried in St. Mary’s Churchyard, Cantref on 15 May.

David Gereth Bowen-Jones, Ordinary Seaman, D/JX 160536, Royal Navy. David was born at Barry on 25 October 1922, the son of Reverend John Alfred Bowen-Jones, BA, and Lilian Gertrude Bowen-Jones (nee Snowden). The family later resided at Llansantffraed Rectory, Breconshire, after his father had become Curate there. David was educated at Christ College, before enlisting into the Royal Navy and after completing his training was posted aboard the Dido-class light cruiser, HMS Bonaventure. One of her first duties during the war was in Operation Fish, the evacuation of British wealth from the UK to Canada. She was then attached to the Mediterranean Fleet. On 31 March 1941 Bonaventure was sailing south of Crete when she was hit amidships by two torpedoes launched by the Italian submarine Ambra and sank with the loss of 139 of her 480 crew. David was 18 years old when he died that day. He has no known grave and is commemorated on the Plymouth Naval Memorial, Devon.

John Thomas Reginald Morgan, Gunner, 968727, Royal Horse Artillery. John was born in 1917, the son of Evan Morgan and Sarah Gwen Morgan (nee Amos), of Maesporth, Scethrog. He enlisted into the Royal Artillery and was posted to 104 (The Essex Yeomanry) Regiment, Royal Horse Artillery. The regiment embarked for the Middle East in 1940 with the 1st Cavalry Division and served with the division in Palestine before transferring to Egypt in April 1941 to join the 2nd Armoured Division, as part of the Tobruk garrison. The regiment then took part in the Western Desert campaign, notably during the first Battle of El Alamein and then became caught up in the Siege of Tobruk, which lasted for seven and a half months. Following the breaking of the siege on 27 November, the regiment joined the 8th Army and after rebuilding joined the North African campaign. John was killed in North Africa on 12 June 1942. The 24-year-old has no known grave and is commemorated on the Alamein Memorial, Egypt.

Joseph Cromwell Smith, Leading Aircraftman, 1152497, Royal Air Force Volunteer Reserve. Joseph was born in 1914, the son of Joseph Smith and Margaret Ann Smith (nee Evans), of Cefn Coed. He married Betty Jones at Vaynor in 1937 and the couple settled at Llansantffraed. Joseph enlisted into the Royal Air Force Volunteer reserve soon after the outbreak of war and after being selected for training as an Air Gunner, was posted to 9 Air Gunners School at RAF Llandwrog, in Caernarvonshire, to complete his training. On 10 October 1941 Joseph took off from Llandwrog aboard an Armstrong Whitworth Whitley Mk I, Serial K7252 on a routine training flight over Caernarvon Bay. The aircraft was heading back to the airfield and beginning its approach when it collided with another Whitley and both aircraft crashed, killing 17 men. Joseph was 27 years old when he was killed in the tragic accident that day. His body was recovered from the wreckage and brought home for burial in Cefn Coed Cemetery.