Llanhamlach is a village in the historical county of Breconshire, which lies about four miles east of Brecon, in the community of Llanfrynach. It had a railway junction called Talyllyn Junction. Within the village stands the parish church, which is dedicated to St. Peter and St. Illtyd. Within the church are two brass memorial plaques which commemorate the local men who died during the Great War, and one man who died in 1920 as a result of his service. 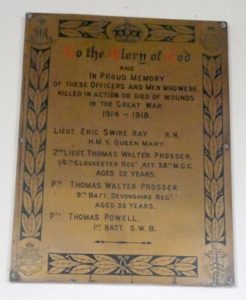 Seabright Wilmott Jones, Armourer, M12380, Royal Navy. Seabright, known as Wilmott, was born at Merthyr Vale on 6 January 1897, the son of Alfred Rees Jones and Rachel Jane Jones (nee Williams). His father was a motor engineer and the family had moved to Yew Tree Cottage, Llanhamlach by 1911. Wilmott trained as a fitter prior to the war. He enlisted into the Royal Navy on 5 March 1915 and was posted to HMS Vivid II for training as an armourer. He received his first posting aboard HMS Illustrious, then returned to Vivid II, before being posted aboard the Canopus-class battleship HMS Vengeance, in the East African Station. Wilmott later served aboard HMS Armadale Castle, before returning to Vivid II and on 25 February 1918 received his final posting aboard the light cruiser HMS Cassandra. Cassandra spent the remaining months of the war patrolling the North Sea, then following the end of the war was sent to the Baltic with the 6th Light Cruiser Squadron, to support the independence of the newly founded Baltic States against the Bolsheviks. On 5 December 1918 the force was on passage to Tallinn when Cassandra struck a mine and quickly sank. Wilmott survived the sinking, but his health was ruined as a result of contracting exposure. He was demobilised on 23 February 1919 after being diagnosed as suffering from tuberculosis and returned home to Llanhamlach where he died on 14 July 1920. The 22-year-old was buried in Llanhamlach Churchyard on 19 July. Wilmott is not commemorated by the CWGC.

Thomas Powell, Private, 26181, South Wales Borderers. Thomas was born at Llandefalle in 1883, the son of John Powell and Elizabeth Powell (nee Preece). His father was a cordwainer and by 1891 had moved the family to 284, Cardiff Road, Aberaman. Thomas remained in Breconshire, and by 1901 was working as a waggoner for David Powell at Abersevin Farm, Trallong. By 1911 he was living at Dolymaes Farm, Llechfain, Llanhamlach, and was working for as a cowman for Edward and Mary Ann Prothero. Thomas enlisted into the 3rd Battalion, South Wales Borderers at Brecon in the spring oof 1915 and was drafted to France a year later, joining the 1st Battalion, South Wales Borderers, which was attached to 3 Brigade, 1st Division. The division moved from Loos to the Somme sector at the beginning of July 1916 and took part in heavy fighting for Bazentin Ridge. Thomas was wounded during heavy fighting at Bazentin le Grand and was evacuated to a Casualty Clearing Station at Dernancourt, where he died of his wounds on 24 September 1916. The 33-year-old was buried in Dernancourt Communal Cemetery Extension, France.

Thomas Walter Prosser, Private, 12678, Devonshire Regiment. Thomas was born in 1879, the son of William Prosser and Elizabeth Prosser (nee Davis), of Cefn Brynich, Llanhamlach. He worked as a collier prior to the war. Thomas enlisted into the army at Aberavon soon after the outbreak of war and was posted to the 9th Battalion, Devonshire Regiment. The battalion formed at Chester on 13 September 1914 as part of 58 Brigade, 19th (Western) Division, moving to Salisbury Plain. The battalion embarked for France with the division and on 19 July 1915 landed at Boulogne, before moving to the Nursery Sector at Calonne for trench initiation alongside the Dehra Dun Brigade. The infantry battalions of the division then began carrying out the usual routines of rotating in the trenches: four days in the front line; four in support; and four in reserve, interspersed with training regimes and carrying out working parties and trench raids. Just south, the British launched a great offensive around the town of Loos on 25 September 1915, and the 19th Division was ordered to attack from its positions at the same time, to attempt to draw enemy attention away from the main battle area. The attacking battalions of the 19th Division were in place by 04.00, and then at 05.50 the men climbed out of their trenches to launch their assault, behind a gas and smoke screen. The assault was a disaster, and heavy casualties were suffered by the 19th Division for no gain. Thomas was badly wounded during the futile attack that day and was evacuated to hospital at Wimereux, where he died of his wounds on 5 October 1915. The 36-year-old was buried in Wimereux Communal Cemetery, France.

Thomas Walter Prosser, Lieutenant, Gloucestershire Regiment. Thomas, known as Walter, was born on 5 December 1895, the son of William Rees Prosser and Sarah Ann Prosser (nee Davies), of Cefn Brynich, Llanhamlach. He enlisted into the Montgomeryshire Yeomanry soon after the outbreak of war, then transferred to the Royal Welsh Fusiliers, before being drafted to France on 18 December 1916. He was commissioned as Second Lieutenant into the 1/6th Battalion, Gloucestershire Regiment on 27 November 1917, but was transferred to the 38th Battalion, Machine Gun Corps following its formation from the merging of the four Machine Gun Company’s of the 38th (Welsh) Division on 1 March 1918. The Division was in the Sailly-sur-la-Lys sector and remained there until being moved to positions north of Albert, at Bouzincourt Ridge, at the end of March 1918, relieving the battered 2nd and 47th Divisions. It held this sector, again carrying out minor operations and trench raids, over the coming months, before taking part in the great offensive of 21 August 1918, and began its advance towards the Hindenburg Line. Over the coming days the division crossed the old Somme battlefields of 1916, capturing Thiepval Ridge, Pozieres Ridge, Mametz Wood and Longueval, before taking Morval and Le Transloy. The next major objective for the division was the crossing of the Canal du Nord, which was completed by the 14th Welsh, before the division continued to advance towards the Hindenburg Line and began attacking its outer defensive systems. On 8 October 1918 the division assaulted the Masnières to Beaurevoir Line, before advancing past Villers-Outréaux.  Walter was badly wounded during the attack, and died of his wounds on the following day, 9 October 1918. The 22-year-old was buried in Beaulencourt British Cemetery, Ligny-Thilloy, France.

Eric Swire Ray, Lieutenant, Royal Navy. Eric was born in Kensington on 14 October 1888, the son of James Frederick Ray and Alice Blanche Ray (nee Suire). He enlisted into the Royal Navy as a young man and trained as a Midshipman at HMS Britannia, qualifying on 30 July 1905. By 1908 he had risen to the rank of Sub Lieutenant and had enjoyed postings aboard a wide variety of ships. Eric married Frederica Maisie McClellan, the daughter of Reverend Edward James McClellan and Sarah Georgina McClellan, of Llanhamlach Rectory, on 24 June 1914. He then left the Royal Navy and was played on the Emergency Reserve List. He was mobilised at the outbreak of war and was initially posted aboard a submarine, but began suffering from severe headaches, so was taken off submarine work and recommended for large ships, so on 19 June 1915 was posted aboard the battlecruiser HMS Queen Mary. The ship had been freshly refitted, before re-joining the Battlecruiser Fleet in the Firth of Forth. On 31 May 1916, Queen Mary put to sea with the rest of the Battlecruiser Fleet to intercept a sortie by the High Seas Fleet into the North Sea as radio messages had been intercepted with details of the German High Seas Fleet having put to sea. The fleets met that afternoon in the North Sea, off Jutland, and commenced battle. The Germans began to retreat, so the Battlecruiser Fleet turned south to attempt to cut off their escape. The British ships were carrying out their turns when the Germans opened fire upon them. Queen Mary opened fire upon SMS Seydlitz and although she could only deploy her forward turrets due to the turn, she hit the German ship twice, causing an internal fire. As Queen Mary and Seydlitz continued to exchange fire, SMS Derfflinger joined the action and opened fire upon Queen Mary. One of her huge shells hit Queen Mary midships, causing a massive explosion which tore her hull apart and she rolled over and sank with the loss of 1,266 lives. Eric was 27 years old when he was killed that day. He had no known grave and is commemorated on the Portsmouth Naval Memorial, Hampshire.