Llanfilo (or Llanvillo) is a village in the historic county of Breconshire, some 1.5 miles west of the larger village of Talgarth, and about 4.5 miles northeast of the county town of Brecon. The village lies just south of the main A438 road between Brecon and Bronllys. The three men of Llanfilo who fell during the Great War are commemorated on a war memorial which is inset into the Lych Gate of St. Bilo’s Church. The lych gate was repaired as a tribute to these men, so is a war memorial in its own right. 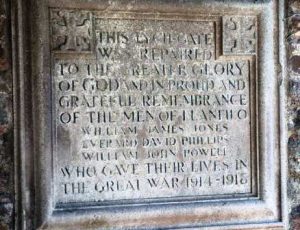 William James Jones, Private, 17178, King’s Own (Royal Lancaster Regiment). William was born in 1897, the son of James Jones and Hannah Maria Jones (nee Gwynne), of the Shop, Llanfilo. He was a farm worker prior to the war. William enlisted at Carmarthen into the army soon after the outbreak of war and was posted to the 7th Battalion, King’s Own (Royal Lancaster Regiment). The battalion was raised at Lancaster in September 1914, as part of 56 Brigade, 19th (Western) Division and embarked for France on 17 July 1915, disembarking at Boulogne, and the entire 19th Division then moved to the Nursery Sector at Calonne for trench initiation alongside the Dehra Dun Brigade. The infantry battalions of the division then began carrying out the usual routines of rotating in the trenches: four days in the front line; four in support; and four in reserve, interspersed with training regimes and carrying out working parties and trench raids. Just south, the British launched a great offensive around the town of Loos on 25 September 1915, and the 19th Division was ordered to attack from its positions at the same time, to attempt to draw enemy attention away from the main battle area. The attacking battalions of the 19th Division were in place by 04.00, and then at 05.50 the men climbed out of their trenches to launch their assault, behind a gas and smoke screen. The assault was a disaster, and heavy casualties were suffered by the 19th Division for no gain. William survived the terrible fighting that day but was wounded during a quiet spell in the trenches near Richebourg in January 1916. He died of his wounds on 18 January 1916. The 19-year-old was buried in Bois Guillaume Communal Cemetery, France. 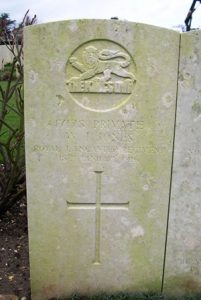 David Everard Phillips, Private, 22446, South Wales Borderers. David was born in 1895, the son of Samuel Phillips and Mary Phillips (nee Morgan), of Upper Penlan, Llanfilo. He worked as a cowman at Talyllyn prior to the war. David enlisted at Hay into the 11th Battalion, South Wales Borderers during the spring of 1915. The battalion was at Colwyn Bay attached to the 43rd (Welsh) Division. The Division trained in North Wales before moving to Winchester in the summer of 1915, where the formation became renumbered 115 Brigade, 38th (Welsh) Division. The Division began moving to France on 2 December 1915 and moved to the Nursery Sector near Fleurbaix for trench initiation alongside the Guards Division. Over the coming weeks the division held different sectors in the same area, including Festubert, Givenchy and the notorious Cuinchy Sector. On 27 April 1916 the 11th SWB relieved the 10th SWB in the Fauquissart Sector, to begin a routine tour in the trenches. David was among four men killed on the following day, 28 April 1916, when the Germans opened up a barrage of artillery fire upon their trenches. The 20-year-old was buried in Rue-Du-Bacquerot (13th London) Graveyard, Laventie, France. 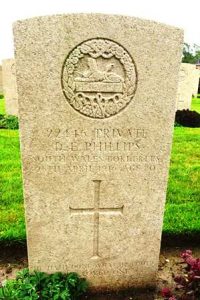 William John Powell, Private, 20359, South Wales Borderers. William was born in 1883, the son of John and Hannah Powell, of Llanfilo. He married Elizabeth Price in 1913 and the couple had a daughter, Lilian Violet Powell, born soon afterwards. The family lived at 1, Council Street, Williamstown, Ebbw Vale prior to the war. William enlisted at Ebbw Vale into the 10th Battalion, South Wales Borderers soon after the outbreak of war. The battalion was raised at Brecon by the Welsh National Executive Committee in October 1914, moving to Colwyn Bay to join 130 Brigade, 43rd (Welsh) Division. On 29 April 1915 the formation became 115 Brigade, 38th (Welsh) Division, before moving to Winchester to complete its training. On 4 December 1915 the battalion landed in France and the entire Division moved to the Nursery Sector near Fleurbaix for trench initiation alongside the Guards Division. The Division then held a sector of the line near Cuinchy before marching south to the Somme sector in June 1916 to take part in the assault on Mametz Wood. The first attack on the wood was launched on a two-battalion front on 7 July, but failed, and the Divisional Commander, Sir Ivor Philipps, was replaced before the Division attacked again on a two Brigade front on 10 July 1916. After two days of ferocious hand-to-hand fighting, the wood was cleared up to its northern edge, before the battered Division was relieved. It then took over a section of the front at Hébuterne before moving to the Ypres Salient and taking over the Canal Bank sector at Boesinghe. The infantry battalions of the Division then began carrying out the normal pattern of rotation in the trenches, four days in the front, four in support and four in reserve, whilst also working on trench improvement, digging new trenches, and also carrying out regular patrols and trench raids. On 31 July 1917 the Division launched its famous assault on the Pilckem Ridge, capturing Iron Cross and reaching its objective of the Steenbeek, then played a supporting role in the Battle of Langemarck. The Division was transferred to the Sailly-sur-la-Lys sector in September and remained in the area over the winter before being moved to positions north of Albert, at Bouzincourt Ridge, at the end of March 1918, relieving the battered 2nd and 47th Divisions. It held this sector, again carrying out minor operations and trench raids, over the coming months, before taking part in the great offensive of 21 August 1918, and began its advance towards the Hindenburg Line. Over the coming days the Division captured Thiepval Ridge, Pozieres, and Mametz Wood, before taking Longueval and Delville Wood and by 28 August 1918 was ready to assault the village of Morval. William was killed in action during the assault that day. The 34-year-old is buried in Morval British Cemetery, France. 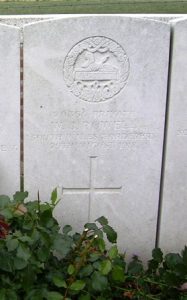