Llandetty is a small village situated along the B4558 road, one mile south-east of Talybont on Usk and three miles southeast of Brecon in the ancient county of Breconshire. The four men of Llandetty who fell during the Great War are commemorated on a grey stone memorial plaque, which is situated inside Llandetty Church. There is also a separate memorial commemorating the one man of the village who fell during World War Two.

William George Bevan, Private, 267428, Monmouthshire Regiment. William was born in 1897, the son of Robert Bevan and Charlotte Bevan (nee Gegg), of Danydarren Farm, Duffryn, Llangynidr. He enlisted into the 2/1st (Brecknockshire) Battalion, South Wales Borderers at Brecon on 3 November 1914. The battalion initially remained in Brecon until April 1915 when it moved to Dale, in Pembrokeshire and remained there for eight months before joining the 68th (2nd Welsh) Division at Bedford. William embarked for France at Southampton on 15 June 1916 and on 5 July was posted from the Infantry Base Depot at Rouen to the 2nd Battalion, Monmouthshire Regiment, which was the Pioneer Battalion to the 29th Division. The Division had seen heavy fighting during the opening day of the Somme offensive, during its assault on Y-Ravine, on 1 July 1916, before being pulled out of the line to rest and rebuild. The Division then moved back into the line and took part in the latter stages of the Somme offensive, before wintering on the Somme. William took ill at the end of January 1917 and was hospitalised with laryngitis. He spent several weeks at home recovering before returning to France to re-join the 2nd Monmouth’s on 15 June 1917, by which time the Division was at Le Meillard, resting after its efforts during the Battle of Arras. The Division was then transferred to the Ypres Salient, taking over positions on the Yser Canal Bank by the end of the month, relieving units of the 38th (Welsh) Division in order for them to train for the forthcoming Passchendaele offensive. William was killed whilst the 2nd Monmouth’s were at work on the Canal Bank on 12 July 1917. The 20-year-old is buried in Bard Cottage Cemetery, Belgium.

William Rodrick Maddox, Private, 93873, Royal Welsh Fusiliers. William was born in 1896, the son of William Maddox and Hannah Maddox (nee Morgan), of Graiglas, Llandetty. By the time war had broken out, he was residing at Aberclydach Fach, Talybont on Usk and was working as a pitwood cutter. William enlisted into the 3rd Battalion, South Wales Borderers at Brecon on 29 February 1916 and was initially placed on the Army Reserve. William was mobilized on 17 April 1918 and was sent to Hightown Camp at Liverpool for training, before embarking for France on 19 September 1918, where he was posted to the 17th Battalion, Royal Welsh Fusiliers. The battalion was attached to 115 Brigade, 38th (Welsh) Division which was advancing from positions north of Albert, on the Somme, towards the Hindenburg Line, as part of the great Allied offensive. William joined the battalion at Sorel-le-Grand on 30 September, where the men were resting, following their exertions over the preceding weeks. During this short period of rest, the Hindenburg Line had been broken at nearby Riqueval on 29 September, so by the time the 17th RWF moved back into the line just to the north, near Bony on 4 October, the Germans were in full retreat. On the following day the battalion advanced to Aubencheul aux Bois, then on 8 October attacked the Beaurevoir Line, in front of Villers Outréaux, capturing all its objectives, together with large numbers of enemy guns and prisoners. The battalion was then relieved and enjoyed a rest at Clery and then at Troisvilles before the 38th Division resumed its advance, advancing north-east, past Le Cateau, towards the Forest of Mormal, forcing the crossing of the River Selle, and over the coming days advanced to Englefontaine, on the western edge of the Forest of Mormal. On 4 November 1918 the division launched an assault from the south-eastern side of Englefontaine against the forest, in conjunction with attacks by the 17th and 18th Divisions, on its flanks. William was killed in action during the fighting that day, just a week prior to the Armistice. The 22-year-old was buried in Cross Roads Cemetery, Fontaine-Au-Bois, France. 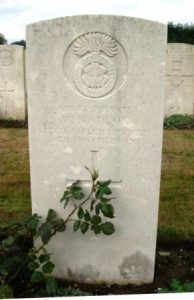 Thomas Sidney Richards, Gunner, 183826, Royal Garrison Artillery. Thomas was born in 1898, the son of John Richards and Sarah Richards (nee Evans), of Penbailey Farm, Llandetty. He worked for his parents on the farm prior to enlisting into the Royal Garrison Artillery at Brecon soon after the outbreak of war. Thomas was then drafted to France in September 1917 and was posted to the 237th Siege Battery, Royal Garrison Artillery. The battery had been raised on the Humber before embarking for France on 23 January 1917. The battery moved to Ypres where it remained for the remainder of the year, taking part in the Passchendaele offensive. The Battery moved slightly south during the winter of 1917-18, taking up positions near Neuve-Chapelle. Thomas was killed in action here by German counter-battery fire on 14 March 1918, when a shell exploded near his gun pit, killing him instantly. The 20-year-old was buried just behind the lines, in Le Touret Military Cemetery, Richebourg-L’avoue, France. 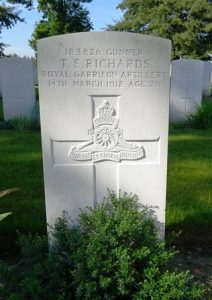 William Voss, Private, 36060, Welsh Regiment. William was born in 1880, the son of Walter Voss and Elizabeth Voss (nee Davies), of Penpound Cottage, Llandetty. He resided at Haverfordwest prior to the war and enlisted there into the 3rd Battalion, South Wales Borderers. William then left the army, joining the Army Reserve, but was mobilised soon after the outbreak of war and was posted to France on 5 May 1915, joining the 1st Battalion, Welsh Regiment, which was attached to 84 Brigade, 28th Division. The battalion was rebuilding its strength behind the lines at Herzeele, following heavy losses suffered during the Second Battle of Ypres, when William joined its ranks. The rebuilt battalion then marched back via Vlamertinghe to Ypres, taking over the trenches near Hooge on 22 May. The battalion was relieved two days later, moving back into support positions, but on 24 May the relieving battalion, the 11th Hussars, was attacked and lost ground, so the 1st Welsh had to rush forwards to their aid. Heavy fighting raged throughout the remainder of the day, whilst the line was restored, and on the following morning, 25 May 1915, the 1st Welsh launched a counter-attack but suffered heavy losses before reforming on the north of the Menin Road near Witte Poort Farm, before renewing the attack upon German positions at Bellewaarde. William was wounded during the ensuing fighting, but soon re-joined the battalion, in time for its move south to join the Battle of Loos, which had opened on 25 September 1915. The 1st Welsh entered the fray on 29 September, taking up support positions at Vermelles, near where the 2nd Welsh had been almost wiped out days earlier.  Two days later the 1st Welsh moved into the front-line and prepared to launch an assault on Little Willie trench. The battalion attacked at dawn on 1 October and became caught up in desperate fighting over the coming days. William was killed in action there on 1 October 1915. The 35-year-old has no known grave and is commemorated on the Loos Memorial, France. 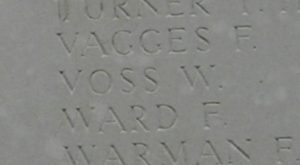