Llanafan Fawr is a village situated along the B4358 road between Beulah and Newbridge-on-Wye in the historic county of Breconshire, about four miles northwest of Builth Wells, on the west side of the river Chwefri. The village contains the remains of an ancient motte and bailey castle as well as what is thought to be the oldest public house in Powys, the Red Lion Inn. The parish church is dedicated to St. Afan and contains a war memorial to the men of the parish who fell during both World Wars. Also within the church is a memorial to a local officer of the Welch Regiment who fell during the Boer War. 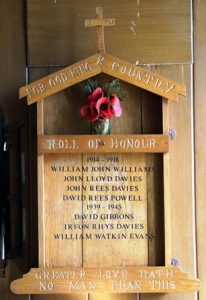 Rhys Price, Captain, Welsh Regiment. Rhys was born at Bath on 30 June 1865, the son of Reverend John Price and Harriett Price (nee Parry). His father became rector of Llangivan, near Talybont soon after his birth. Rhys was educated at Christ College, Brecon and at Llandovery College prior to being commissioned from the 3rd Battalion, South Wales Borderers as Second Lieutenant into the Welsh Regiment in 1888. He embarked for India with the 1st Battalion, Welsh Regiment and was promoted to full Lieutenant there two years later. By the time of the Boer War, which began in 1899, Rhys had been promoted to Captain and embarked for South Africa with the 1st Welsh. He took ill in South Africa and died of blood poisoning at the Modder River on 3 March 1900. The 34-year-old was buried in West End Cemetery, Kimberley. Two nephews, Charles Powell Bomford and Richard Lyndon Bomford, the sons of his sister Dorothy Maud, were killed in World War Two.

John Lloyd Davies, Private, 56967, Welsh Regiment. John was the son of Evan Davies, of Belle Vue, Llanfihangel, Garth. He enlisted into the 3/1st Battalion, Montgomeryshire Yeomanry at Rhayader on 19 July 1915, and was posted to Park Hall, Oswestry for training. On 8 August 1916 John embarked for France, and was transferred to the 10th Battalion, Welsh Regiment, which was attached to 114 Brigade, 38th (Welsh) Division, joining the battalion in camp at Poperinghe on 1 September. The Division was rebuilding, following its ordeals during the attack on Mametz Wood in July, and had been allocated the task of holding the Canal Bank sector of the front line, north of Ypres. The 10th Welsh began life in the Ypres Salient assisting the 177th Tunnelling Company, Royal Engineers, which had been constructing deep dugouts at Birr Cross Roads, and mining in the Railway Wood sector. The 177th TC had sent men to the Canal Bank sector, to aid in the construction of dugouts and bunkers, and the 10th Welsh, comprised mainly of South Wales miners, was the ideal unit to help in this work. The war diary for the time states the ground was of ‘bastard blue clay’, so digging conditions must have been hard. This work continued for many weeks, until the 10th Welsh moved into the front line on 17 January 1917, to begin a routine tour of duty. These tours usually comprised four days in support, four in the front line, four in reserve, on a rolling basis, as well as supplying working parties and carrying out routine trench raids and patrols. On 24 March 1917 the 10th Welsh was in the process of being relieved by the 13th Welsh after another tour in the front line, when John was wounded, suffering gunshot wounds in the back and right knee. He was evacuated to the 46th Casualty Clearing Station at Proven, where he died of his wounds on 28 March 1917, aged 23. John is buried in Mendinghem Military Cemetery, Belgium. 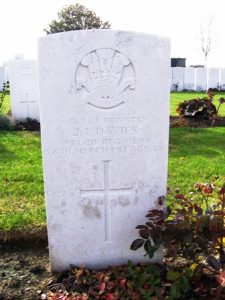 John Rees Davies, Private, 269540, Royal Engineers. John was born on 29 December 1877, the son of Isaac and Sarah Davies, of Oakfield House, Llanafan. He married Mary Samuel in 1901 and the couple set up home at 33, Wye View Terrace, Builth Road, where their two sons were born. John worked for the London and North Western Railway, at their engineering department at Builth Road prior to the war. He enlisted into the Royal Engineers and was posted to the 343rd Road Construction Company, RE in France. By the summer of 1917 John’s Company was attached to XIX Corps, at Ypres. The Third Battle of Ypres opened on 31 July 1917 and the Company would have been employed in building and repairing roads in order to keep the flow of men and material flowing to the front lines. He was wounded within a couple of days of the launching of the offensive and died of his wounds at the 17th Casualty Clearing Station, Lijssenthoek on 8 August 1917, aged 39. John is buried in Lijssenthoek Military Cemetery, Belgium. 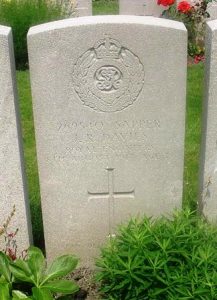 David Rees Powell, Private, 29212, South Wales Borderers. David was the son of David and Miriam Powell, of Llanerchllwyd, Llanafan Fawr. He enlisted into the South Wales Borderers early in 1915, and after completing his training was posted to France at some time in 1916, joining the 6th Battalion, South Wales Borderers, which was attached to the 25th Division, as the Divisional Pioneers. He probably joined the battalion early in 1917, following its losses during the Battle of the Somme, where the Division had taken part in several major actions. The Division moved to the Ploegsteert Sector, with the 6th SWB taking over a camp at Oosthove Farm, by the beginning of November 1916, and spent the coming months there, supplying working parties and constructing and improving trenches. At the end of February 1917, the 6th SWB moved to the Caestre area to carry out a training program and on 23 March moved to Neuve Eglise. The Division then took part in the Battle of Messines Ridge in June 1917 and remained in this area while the main Passchendaele offensive began on 31 July. David was killed whilst at work near Belgian Chateau on 9 August 1917, aged 23. He is buried in Belgian Battery Corner Cemetery, Ieper, Belgium.

Frank Edward Richards, Private, 315363, Tank Corps. Frank was born in 1896, the son of John Richards and Mary Ann Richards (nee Powell), of Dolcelli, Llanafan Fawr. He worked as a farm labourer prior to the war and was a regular Sunday School teacher and lay reader. Frank was originally granted an exemption from military service during the Builth Rural Tribunal of November 1916, then in May 1917 was conscripted into the army. He was drafted to France in August 1918, joining a battalion of the Tank Corps and took part in the great offensive towards the Hindenburg Line. The Tank Corps played an important role in these last few months of the war, co-operating with infantry units as they attacked strongly defended German outposts which guarded the Hindenburg Line, then once the line was smashed at the end of September, assisted in driving the Germans back towards the Frontier. Frank survived the war and returned home on leave, but contracted influenza soon afterwards, which severely weakened him. He never recovered his full health and died at home on 11 September 1919. The 23-year-old was buried in St. Afan’s Churchyard, Llanafan Fawr on Tuesday 16 September. Frank is not commemorated as a casualty of war by the CWGC. He is not commemorated on the Llanafan Fawr war memorial.

John Thomas Williams, Private, 37572, Welsh Regiment. John was born in 1886, the son of John Williams and Elizabeth Williams. He left home as a young man to enlist into the Welsh Regiment and served for seven years, including four years in India, before being discharged and returning to Wales. Some time after the outbreak of war, John re-enlisted into the Welsh Regiment and embarked for France on 4 August 1915, joining the 1st Battalion, Welsh Regiment, which was attached to 84 Brigade, 28th Division. John joined the battalion in rest camp at Locre, where it was resting after a horrific spell in the trenches between Voormezeele and Vierstraat which had seen the Germans detonate an underground mine beneath their positions. On 14 August the 1st Welsh moved into the Kemmel trenches to begin a routine tour, John’s first of the war, which was again marked by the blowing of another enemy mine. On 17 September the 1st Welsh moved out of the Kemmel sector and began moving out of the area with the rest of the division to join the Battle of Loos, which had opened on 25 September 1915. The 1st Welsh entered the fray on 29 September, taking up support positions at Vermelles, near where the 2nd Welsh had been almost wiped-out days earlier.  Two days later the 1st Welsh moved into the front-line and prepared to launch an assault on Little Willie trench. The battalion attacked at dawn on 1 October and became caught up in desperate fighting over the coming days. John was killed in action during the opening assault on Little Willie Trench on 1 October 1915. The 29-year-old has no known grave and is commemorated on the Loos Memorial, France.

Irfon Rees Davies, Driver, 14513570, Royal Engineers. Irfon was born in 1924, the son of Rees Davies and Mary Selina Davies (nee King), of Bwlch Yr Adwy Wynt, Builth Wells. He enlisted into the army and became a driver with 18 Movement Control Pool, Royal Engineers. Irfon was killed during the fighting on the Rhine, at some time between 20 December and 21 December 1944. The 20-year-old is buried in Schoonselhof Cemetery, Belgium.

William Watkin Evans. This man cannot presently be identified, as no-one of that name is listed as an official war casualty.