Brynmawr is a market town situated in the historic county of Breconshire and is now part of Blaenau Gwent. The town is situated at the head of the South Wales Valleys and grew with the development of the local coal mining and iron industries in the early 19th century from its original settlement, which was named Gwaun Helygen, which sat on the border between the counties of Monmouthshire and Breconshire. The original village lay on the turnpike road from Abergavenny to Merthyr Tydfil and was surrounded with areas rich in coal deposits. With the development of Nantyglo ironworks, Gwaun Helygen was chosen as an ideal area for a settlement and houses sprang up rapidly to cope with the influx of workers. Whilst all of the men of Brynmawr who fell during both World Wars are commemorated on the main Brynmawr Cenotaph, there are also other memorials within the town, situated within some of the various places of worship there. This page of the website commemorates the three members of the congregation of the Brynmawr Bailey Street Presbyterian Chapel who fell during the Great War of 1914-1918. The men are commemorated on a brass memorial plaque within the Chapel, which is located near the pulpit. 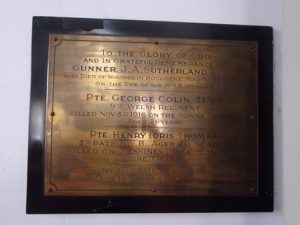 William George Colin, Private, 53769, Welsh Regiment. William, known as George, was born on 21 October 1895, the son of William Colin and Clara Maria Colin (nee Pearce), of 113, Worcester Street, Brynmawr. He enlisted at Brynmawr into the Welsh Regiment under the name of George Collins during the summer of 1916 and was drafted to France a year later, joining the 9th Battalion, Welsh Regiment, which was on the Somme, attached to 58 Brigade, 19th (Western) Division. George joined the battalion as it was rebuilding following heavy losses during the opening stages of the Somme offensive in July 1916. After a brief rest the 19th Division then took part in an assault from the Heligoland Trenches against Contalmaison in daylight behind a creeping artillery barrage, the first time this strategy was used, suffering heavy casualties again, but reaching the outskirts of the village. The division was then relieved and moved back behind the lines to rebuild, in bivouacs at Baisieux Wood whilst heavy fighting continued around Ovillers and Trônes Wood. During the last few days of September and the first week in October, the British made notable advances to the north of Thiepval and towards Bapaume, capturing the villages of Le Sars and Eaucourt L’Abbaye. Winter then fell upon the Somme, yet the fighting raged on and British attention turned towards the Ancre valley. The 19th Division, which had moved to the Bailleul area to refit, was brought back south at the beginning of October, and took part in the final operations which ended with the capture of Beaumont Hamel. On 26 October the 9th Welsh relieved the 9th Loyals in the Stuff Redoubt trenches and endured a very trying period in the line. George was killed in action as the 9th Welsh were about to be relieved here on 5 November 1916. The 20-year-old was originally buried on the battlefield, but his grave was located by a Canadian Burial Party in April 1919, and he was re-interred in Regina Trench Cemetery, Grandcourt, France. His stepbrother, Stephen Colin, was killed at sea in 1917.

John George Alex Sutherland, Gunner, 48224, Royal Garrison Artillery. John was born on 23 March 1897, the son of John Alex Sutherland and Georgina Sutherland, of 116, Worcester Street, Brynmawr. His parents were both from Caithness, in Scotland, but had moved to Brynmawr due to his father’s work as a draper. John enlisted at Brynmawr into the Royal Garrison Artillery and was drafted to France early in 1916, being posted to the 61st Trench Mortar Battery, Royal Garrison Artillery. John was badly wounded soon after joining the battery and was evacuated to the 13th General Hospital at Boulogne, where he died of his wounds on 22 March 1916, the day before his 19th birthday. The 18-year-old is buried in Boulogne Eastern Cemetery, France.

Henry Idris Thomas, Private, 29043, South Wales Borderers. Henry was born in 1896, the son of Reverend David Thomas, and of Jane Elizabeth Thomas, of Tyr Onnen, 9, Alma Street, Brynmawr. His father was pastor of Bailey Street Presbyterian Church, Brynmawr. Henry was educated at Brynmawr County School before gaining a position as an assistant chemist at Ebbw Vale. He enlisted into the South Wales Borderers in January 1917 and was drafted to France in May, being posted to the 5th Battalion, South Wales Borderers, which was the Pioneer Battalion to the 19th (Western) Division. Henry joined the battalion at Ypres, where it was under the command of Courtney Vow Trower, a well-regarded officer. The battalion was hard at work constructing tramways and digging trenches in preparation for the forthcoming assault on Messines Ridge. Two main tramways were under construction by the 5th SWB: the Lille Gate tramway and the Zillebeke tramway, and the battalion was enduring a tough time, constantly losing men through German artillery fire. The Battle of Messines Ridge opened at dawn on 7 June 1917, heralded by the blowing of some 21 vast underground mines, which obliterated the German lines. The British then launched a massed infantry assault, supported by large numbers of tanks, upon the shattered German defenders who survived. The men of the 5th SWB followed up the infantry assault, consolidating the freshly gained ground and constructing mule-ways and cart tracks, to enable the front-line to be supplied. Henry was killed in action whilst carrying out this vital work that day. The 20-year-old is buried in Voormezeele Enclosure No. 3, Belgium. 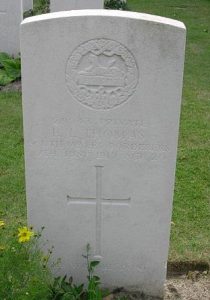