Breconshire Constabulary was established on 6 January 1857, with its Headquarters in the county town of Brecon. The force became part of Mid Wales Constabulary on 1 April 1948, then in 1968 Mid Wales Constabulary merged with Carmarthen and Cardigan Police and Pembrokeshire Police to form Dyfed Powys Police. The officers of Breconshire Constabulary who fell during the Great War are commemorated on a brass memorial plaque, which is located within the Brecon Cathedral. The memorial was dedicated and unveiled in what was then named St. John’s Priory Church at Brecon on Wednesday 5 November 1919 during a service led by Chief Constable Colonel C. G. Cole-Hamilton, CMG, DSO and commemorates the five former members of the Constabulary who fell during the Great War. All of these men are also commemorated on the relatively modern war memorial in the Dyfed Powys Police HQ at Carmarthen. 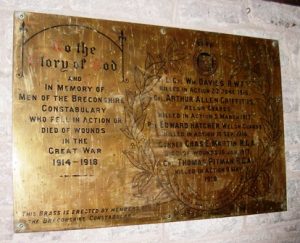 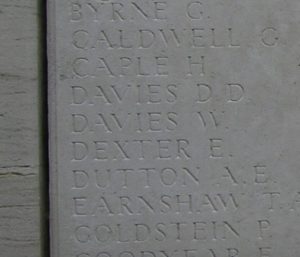 Arthur Allen Griffiths, Lance Corporal, 1319, Welsh Guards. Arthur was the son of Jeremiah and Mary Griffiths, of 3, Bridge Villa, Credenhill, Hereford. He had served with the Grenadier Guards prior to 1900 when he enlisted into the Gloucester Regiment. He embarked for South Africa with the regiment in 1900, and saw action during the Boer War, then served in India until returning to England again in 1908. In 1912 he left the army to join the Breconshire Constabulary and served as a Policeman at Brecon, Builth and Hay prior to the war. He enlisted there into the 1st Battalion, Welsh Guards. The Regiment was raised by Royal Warrant of 26 February 1915, at White City, before landing at Le Havre on 18 August 1915, becoming attached to 3rd Guards Brigade, Guards Division. The Division saw its first major action during the Battle of Loos on 25 September 1915, remaining in the area during the coming months, where they also fought in the subsequent Action of Hohenzollern Redoubt. In July 1916 the Division moved to the Somme, where they fought at the Battle of Flers-Courcelette, and then at the Battle of Morval, capturing Lesboeufs Village. They remained here for the winter, and followed up the German withdrawal to the Hindenburg Line the following spring. Arthur was killed in action by a shell along with two other men while carrying out wiring repairs in No Man’s Land on 5 March 1917. He was 33 years old and is buried in Sailly-Saillisel British Cemetery, France.

Edward Hatcher, Guardsman, 1321, Welsh Guards. Edward was the son of Edward and Annie Hatcher, of Appleshaw Street, Appleshaw, Hampshire. He had served as a Policeman at Brecon and Llanwrtyd Wells prior to the war and enlisted at Brecon into the 1st Battalion, Welsh Guards. He married Elizabeth Mary Williams of Llyswen whilst home on leave on 5 August 1916. He joined the battalion, which was attached to the 3rd Guards Brigade, Guards Division, in France during the summer of 1916, in time to take part in the Battle of the Somme. On the night of 8 September 1916 the Welsh Guards moved passed Cuinchy through Guillemont towards the front line, in preparation to take over the line on the following morning prior to the next phase of the offensive towards Leuze Wood. The situation was confusing, and the Guardsmen struggled to get to their proper positions, encountering strong German opposition during the morning. Edward was killed in action during heavy fighting on 10 September 1916. He was 28 years old and was buried in London Cemetery & Extension, Longueval, France. 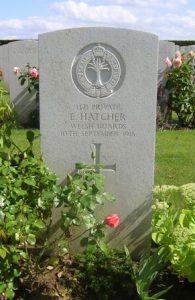 David John Joseph, Private, R4/307951, Royal Army Service Corps. David was the son of Price Joseph and Margaret Joseph (nee Williams), of Myrtle House, Llangammarch Wells. He worked as a groom prior to enlisting into the Breconshire Constabulary as a young man and was posted at Crickhowell Police Station. David married Gertrude Elsie Jones at Abergavenny on 24 June 1913 and the couple set up home at the Police Station. David enlisted into the Army Service Corps (Remounts) at Bristol on 29 September 1915 and was posted to the Depot at Shirehampton. On 29 August 1916 he was posted to the 60th Remount Squadron at Bulford, but about six months later began suffering with his health. David was hospitalised at Bulford where he was found to be suffering from phthisis, contracted during his service, and he was discharged from the army as medically unfit on 18 June 1917, with a full pension. He returned home to his wife at Crickhowell and died there of tuberculosis on 18 February 1919. The remains of the 31-year-old were buried with his father in Llanlleonfel Churchyard, Garth. David is not commemorated as a casualty by the CWGC, nor is he commemorated on the Breconshire Constabulary War Memorial.

Charles Ellis Martin, Gunner, 57582, Royal Garrison Artillery. Charles was the son of Job and Sarah Martin, of 30, Oakland Cottage, Llanddewiricwm, Brecon. He had served with the Brecknockshire Battalion, South Wales Borderers (Territorials) from 1908 until 1912 and had served as a Policeman at Brynmawr prior to the war. He enlisted there into the Royal Garrison Artillery alongside his friend and colleague PC Thomas Henry Pitman. Charles was posted to France early in 1916, joining ‘Y’ 34th Trench Mortar Battery, Royal Garrison Artillery.  He served during the Somme offensive that summer, and towards the end of 1916 returned home to Brynmawr on two weeks leave. Charles had only been back in France a week when he was mortally wounded, and died on 16 January 1917 aged 23. He is buried in Hazebrouck Communal Cemetery, France.

Thomas Henry Pitman, Corporal, 57583, Royal Garrison Artillery. Thomas was born at Fishguard in 1895, the son of Henry and Winifred Pitman. His father had been a long serving Petty Officer, and after retirement had moved the family to Dorset House, Cwmllynfell by 1901. Thomas had served as a Policeman at Brecon and Builth Wells prior to enlisting at Brecon into the Royal Garrison Artillery. He was posted to the 5th/6th Trench Mortar Battery. Not much is known of Thomas’ service on the Western Front, but he had been on active service for over two years when he was killed in action after being struck by shell fragments on 9 May 1918, aged 23. He was originally buried in Blairville Orchard British Cemetery, but in 1923 all of the graves in the cemetery were exhumed and relocated to Cabaret-Rouge British Cemetery, Souchez, France. 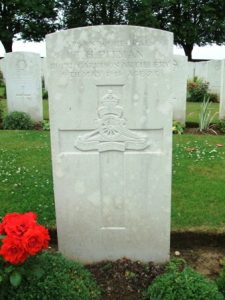