Aberyscir is a village in the community of Yscir, situated some four miles west of Brecon, in the ancient county of Breconshire. The village is centred around Aberyscir Court and the neighbouring Church, which is dedicated to St. Mary and St. Cynidr. Inside the Church is a simple war memorial plaque, which commemorates the four local men who fell during the Great War. 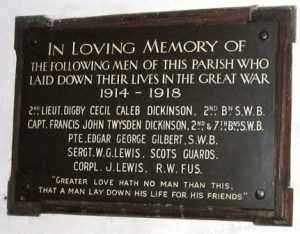 Digby Cecil Caleb Dickinson, Second Lieutenant, South Wales Borderers. Digby was born at Brecon on 10 October 1897, the son of Francis Digby Dickinson and Lucy Elizabeth Helen Dickinson (nee Jones), of Aberyscir Court, Brecon, and was the nephew of Alderman Douglas Thomas Maybery Jones, of Llandovery. He was educated at May Place, Malvern Wells, and Malvern College, where he won the Ledbury Run in 1916. Digby entered Sandhurst in August 1916 and was commissioned as Second Lieutenant into the South Wales Borderers in August 1917. He was then drafted to France and on 29 August joined the 2nd Battalion, South Wales Borderers, which was at Plumstead Camp, Ypres, attached to 87 Brigade, 29th Division. The battalion was rebuilding following heavy losses at Langemarck, before taking part in further fighting near Poelcapelle. Early in October 1917 the Division was relieved from the line at Ypres, and moved south to the Bellacourt area, to prepare to take part in the forthcoming Battle of Cambrai. The Division entrained for Péronne on 17 November, marching to a camp four miles out of the town at Haut Allaines, then by midnight on 18 November had reached Fins. On the following day the Division received its battle stores and detailed orders for the forthcoming battle, marching off via Gouzeaucourt to its assembly positions at Marcoing. The assault began at dawn on 20 November, but the Division suffered terrible casualties whilst attacking Masnières, on the Hindenburg Line. The Division wintered on the Hindenburg Line before returning to Ypres in January 1918, taking over positions near the Goudberg Spur. To the south, the Germans launched the first phase of their Spring offensive on the Somme on 21 March, then on 9 April switched their attention to the Lys, so the 29th Division was relieved from its positions on Passchendaele Ridge and thrown into action during a desperate defensive action near Les Haies Basses and saw heavy casualties over the coming days. Digby was slightly wounded during the fighting in April 1918, but soon returned to duty. The Germans switched their attention to the Chemins-des-Dames in May, so the 29th Division, now holding the line at Vieux Berquin, had a relatively quiet few months. To the south, following a great Australian and Canadian victory at Villers-Bretonneux on 8 August, the Allies began preparing to launch a great offensive along the Somme front. Meanwhile, the 2nd SWB, now in the Merris Sector moved into the front line near Outtersteene on 15 August to begin a routine tour in the line. On 18 August 1918, 87 Brigade launched an assault against the German lines in order to regain some lost ground. Digby was killed in action during the assault that day. The 20-year-old is buried in Borre British Cemetery, France. His brother Francis was killed just a month later. 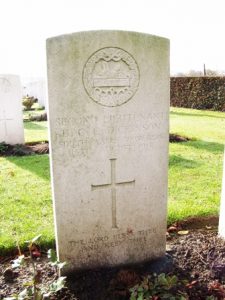 Francis John Twysden Dickinson, Captain, South Wales Borderers. Francis was born at Llandovery on 8 November 1896, the son of Francis Digby Dickinson and Lucy Elizabeth Helen Dickinson (nee Jones), of Aberyscir Court, Brecon, and was the nephew of Alderman Douglas Thomas Maybery Jones, of Llandovery. He was educated at May Place, Malvern Wells, and Wellington College, before entering Sandhurst in January 1915. In the following June he was commissioned as Second Lieutenant into the South Wales Borderers and was drafted to Egypt in January 1916, joining the 2nd Battalion, South Wales Borderers, which was attached to 87 Brigade, 29th Division and had just been evacuated from Gallipoli. The Division then transferred to the Western Front, landing at Marseilles on 15 March and entraining for the Somme sector, taking up positions near Beaumont Hamel, facing Y-Ravine. Francis was wounded here soon afterwards, when the Germans raided the battalions’ trenches on 7 April 1916. He was slowly evacuated home through the chain of Field Ambulances, Casualty Clearing Stations and Base Hospitals and spent six months recuperating. He then spent several months on home service before embarking for Salonika in June 1917, and was posted to the 7th Battalion, South Wales Borderers, which was attached to 67 Brigade, 22nd Division. Francis was killed in action in Salonika on 17 September 1918, aged just 21, and is buried in Doiran Military Cemetery, Salonika. His brother, Digby, had been killed in France the previous month. 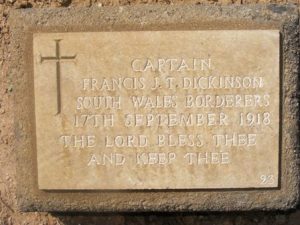 Edgar George Gilbert, Private, 25994, South Wales Borderers. Edgar was born in Llanvapley, Monmouthshire in 1883, the son of Eli Gilbert and Elizabeth Gilbert (nee Watkins). The family moved to Cantref Cottage, Aberyscir by 1901 after Eli had gained the position of gardener for Francis Dickinson, at Aberyscir Court. By 1911, Edgar was residing at 9, Blaencuffin Road, Llanhilleth and was working as a coal hewer. He enlisted into the South Wales Borderers at Abergavenny and was drafted to France early in 1916, joining the 1st Battalion, South Wales Borderers, which was at Loos attached to 3 Brigade, 1st Division. During July 1916 the Division moved south, to join the great Somme offensive, and reached Albert by 11 July, taking up billets in the town. On the morning of 15 July, 3 Brigade received orders to proceed via the recently captured Mametz Wood to the new front line, facing Bazentin Ridge, and took over positions near Bazentin-le-Petit Wood. On the following morning the battalion took part in its first assault on the Somme, but came under intense machine-gun fire, forcing the battalion to withdraw. On 19 July, after a torrid spell in the line, the Brigade was relieved and moved into reserve for a short rest. On 24 July the 1st SWB moved into support positions at Contalmaison and at dawn the following morning, 25 July 1916 launched an attack on Munster Alley. Edgar was killed in action during the fighting that day. The 33-year-old has no known grave and is commemorated on the Thiepval Memorial, France.

John Lewis, Corporal, 55470, Royal Welsh Fusiliers. John was the son of John Lewis and Anne Lewis, of Gwarcae, Llanthew. He worked as a carpenter and wheelwright prior to the war. John originally enlisted into the Montgomeryshire Yeomanry but was then transferred to the Royal Welsh Fusiliers. He was drafted to France in the winter of 1916-17, joining the 17th Battalion, Royal Welsh Fusiliers, which was attached to 115 Brigade, 38th (Welsh) Division. John joined the battalion at Ypres, where it had taken over the Canal Bank sector at Boesinghe. The infantry battalions of the Division then began carrying out the normal pattern of rotation in the trenches, four days in the front, four in support and four in reserve, whilst also working on trench improvement, digging new trenches, and also carrying out regular patrols and trench raids. On 31 July 1917 the Division launched its famous assault on the Pilckem Ridge, capturing Iron Cross and reaching its objective of the Steenbeek, then played a supporting role in the Battle of Langemarck. The Division was transferred to the Sailly-sur-la-Lys sector in September and remained in the area over the winter before being moved to positions north of Albert, at Bouzincourt Ridge, at the end of March 1918, relieving the battered 2nd and 47th Divisions. It held this sector, again carrying out minor operations and trench raids, over the coming months, before taking part in the great offensive of 21 August 1918, and began its advance towards the Hindenburg Line. Over the coming days the Division crossed the old Somme battlefields, recapturing Thiepval, Pozieres, Mametz Wood, Longueval and Delville Wood, before crossing the Canal du Nord and reaching the outer Hindenburg Line Defences. Once the Hindenburg Line had been smashed, the Division advanced towards Le Cateau towards the River Sambre, crossing the river before reaching Forest, on the edge of the mighty Forest of Mormal. John was killed in action here during an attack on Englefontaine on 29 October 1918. The 26-year-old is buried in Englefontaine British Cemetery, France. 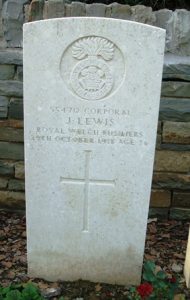