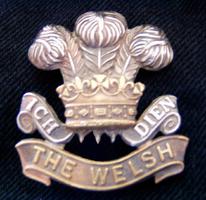 The battalion was attached to the South Wales Infantry Brigade, 53rd (Welsh) Division. As with all army battalions, eight Company’s were formed;

A Company at Haverfordwest (detachment at Milford Haven)

B Company at Pembroke (detachment at Narberth)

The members of the battalion attested for home service, and were required to attend an annual training camp to sharpen their military skills. The battalion was in camp at Portmadoc on 4 August 1914 when war was declared, and the following day the Territorial Force was mobilised for war.

Local railway stations throughout West Wales seeing huge crowds of well-wishers assembling to bid farewell to their soldier sons and husbands, as the men entrained to join the battalion which was being mobilised at Pembroke Dock. The 4th and 5th Welsh then moved to Tunbridge Wells, and later to the east coast of Scotland to man the Forth defences, before rejoining the Division in April 1915.

On 19 April 1915 the Welsh Division was reorganised, and the 4th Welsh became part of 159 Infantry Brigade, 53rd (Welsh) Division and on 3 July 1915 the division received orders to prepare to embark for overseas service. In the meantime the men, who had originally attested for home service, had to sign new papers to show their willingness to serve overseas. Thos who did joined the front-line battalion of the 4th Welsh, the 1/4th Battalion, Welsh Regiment, while those who didn’t were sent back to Pembroke Dock to join the 2/4th Battalion, Welsh Regiment, which would be used to train up new recruits.

By 19 July 1915 the 1/4th Welsh had completed boarding the transport ship S.S. Huntsend, and the ship set steam as part of a fleet of eight transport ships, for the Mediterranean. Their destination would be the shores of Gallipoli, as part of a force which it was hoped would be able to break the deadlock of the campaign, which had stalled since the landings of 25 April 1915.

The fleet passed Gibraltar on 22 July, and sailed past Malta, Alexandria and Imbros. On 6 August the main offensive was launched on Gallipoli, and the Welsh Division began landing at Suvla Bay on the evening of 8 August 1915. By the time the Division had finished assembling the following morning, the units were sent off in all directions, chaos reigning the day. Little is known of what really happened, but the 1/4th Welsh was one of the last battalions sent to the front line, and was sent into the attack late in the day, sustaining terrible casualties over the coming days, in five days the casualty toll amounted to 14 Officers and 272 Other Ranks, killed, wounded or missing.

By 11 August the Division had taken over its own section of the front. It remained on Gallipoli until being evacuated on 11 December 1915, after having suffered a terrible winter, when men were frozen to death or drowned in the trenches after torrential rain. The majority of these later casualties were due to the terrible conditions, which decimated the battalion, and on 8 October 1915 the 1/4th and 1/5th Welsh were temporarily merged to form the 4/5th Welsh Composite Battalion.

The Division was among the first to evacuate Gallipoli on 11 December 1915, and moved to Egypt, where it spent the next fifteen months rebuilding manpower and on 10 February 1916 the 1/4th Welsh regained its identity. The Division was put to work guarding the Suez Canal and the sweet water canal, and fighting against bands of Arabs, who were loyal to the Turks.

On 17 April 1917 the 1/4th Welsh then took part in the Second Battle of Gaza, playing a less important role than it did in the first, due to the weakness in numbers of the Welsh Division, but nonetheless securing most of their allotted objectives. The battle enabled the Allies to secure a good position which would enable them to launch another offensive. The 1/4th Welsh lost three officers and 11 men killed, two officers and 30 men wounded.

The Third Battle of Gaza was launched on the night of 1 November 1917, and the 1/4th Welsh suffered another 4 officers and 65 other ranks killed or wounded during this final set piece battle.

After the capture of Jerusalem on 9 December 1917 the war in Palestine had reached its zenith, with the final year of the campaign being the pursuit of the broken Turkish army, although the conditions for the British soldier were terrible. The 1/4th Welsh took part in the final major phase of the Operations in the Jordan Valley.

In the middle of August 1918 the 1/4th and 1/5th Welsh were merged again to form the 4/5th Welsh, due to heavy losses and the difficulty of getting reinforcements due to the coming offensive in France, and came under the Command of Lieutenant-Colonel A.P. Hohler. It remained in this form for the final offensive in the Jordan, and the Battle of Megiddo. After the armistice the 4/5th Welsh was moved to Egypt, before the battalion was finally sent home in 1919.

On Saturday 22 September 1923 a memorial service was held at St. David’s Cathedral to commemorate the members of the battalion who had fallen during the Great War and a new window was unveiled by Lieutenant Colonel A. F. Beddows, VD. 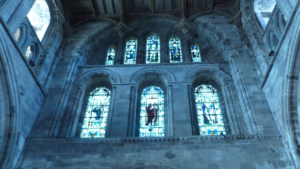 The Plaque Beneath the Window 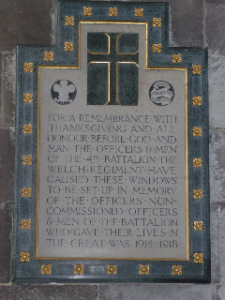 A scan of the Memorial Service Booklet 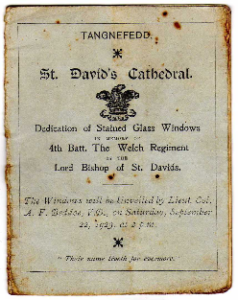 Casualties of the 4th Welsh

The majority of the fallen, whatever their unit, were from west Wales and can be found on the various memorials throughout this website, especially on the larger memorials such as Haverfordwest, Milford Haven, Carmarthen, Cardigan and Llanelli.

The Battalion returned to its Territorial role between the wars, reverting to the old spelling of 4th Battalion, Welch Regiment in 1922, and in World War Two saw active service in Northern Ireland and England, before landing in Normandy with the 53rd (Welsh) Division, and fighting in North-West Europe and Operation Market Garden.

After returning again to its peacetime role in 1946, the 4th Welch resumed its Territorial role, but on 11 June 1969 the Welch Regiment was disbanded, following the merger of the Welch Regiment and South Wales Borderers to form the Royal Regiment of Wales.