Silver and lead mining was a centuries old industry in north Ceredigion employing thousands of men, women and children. Villages like Ystumtuen were at the forefront of that industry.  Towards the end of the 19th century the industry was in rapid decline, but the demand for zinc helped counter that decline and during the First World War the mining industry in the area was able to make a valuable contribution towards the armaments industry. The men of the village who fell during the Great War are commemorated on a marble memorial, inside Ebenezer Chapel. These same men are also commemorated on the new Ponterwyd and Ystumtuen War Memorial. 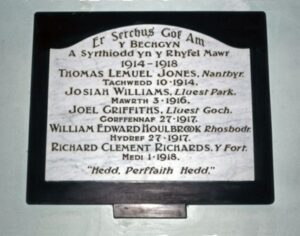 Joel Griffiths, Private, 54228, Durham Light Infantry. Joel was the son of John and Mary Griffiths, Lluest Goch, Ystumten. He had enlisted at Aberystwyth into the Welsh Regiment in 1914, but a few months later was posted to the 20th Battalion, Durham Light Infantry, which landed at Le Havre on 5 May 1916 attached to 123 Brigade, 41st Division. The Division moved to positions around Ploegsteert and the Douve valley, south of Ypres. They remained here until August 1916, when they moved to the Somme, and took part in the Battle of Flers-Courcelette. The Division remained in the line, pushing on to Courcelette over the next few days before coming out for a rest and re-fit. They then fought at the Battle of Le Transloy, before moving to positions south of Ypres in 1917, where they took part in the Battle of Messines. Joel was killed in action while the battalion was readying for the next phase of the offensive, on 27 July 1917. He had become the third man from the village to be killed, all three of whom are commemorated on the Ypres (Menin Gate) Memorial, Belgium. 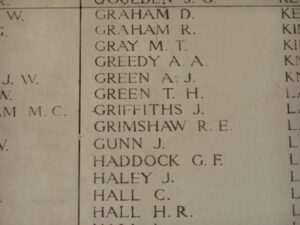 William Edward Houlbrook, Corporal, 9395, East Yorkshire Regiment.  William was born on 30 October 1891, the son of Walter and Emily Houlbrook of Batley, Yorkshire. A career soldier, he had been in the army for eight years previous to the Great War, and first came to the Ystumtuen area with the 1st Battalion, East Yorkshire Regiment for summer camp.  It was then that he met his wife Elizabeth Ellen of Ystumtuen whom he married at Beverley Minster. At the outbreak of war, the 1st Battalion, East Yorkshire Regiment was at York, attached to 18 Brigade, 6th Division, and landed with the Division at St. Nazaire on 10 September 1914. The Division moved to join the BEF in Flanders, where it took part in the Action of Hooge during June 1915. On 26 November 1915 the 1st East Yorks transferred to 64 Brigade, 21st Division at Armentieres. The Division fought throughout the Somme campaign of 1916, capturing Gueudecourt before taking part in the Battle of Le Transloy. In March 1917 they followed the German Retreat to the Hindenburg Line, and in April fought at Arras. Later in 1917 they were moved to Ypres, and took part in the Battle of Polygon Wood, the Battle of Broodseinde and the Second Battle of Passchendaele. William was killed in action here on 27 October 1917, aged 25, and is commemorated on the Tyne Cot Memorial, Belgium. 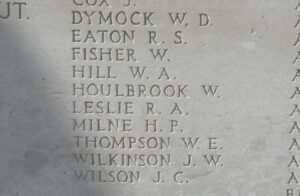 Thomas Lemuel Jones, Private, 15211, Grenadier Guards.  Lemuel was the son of Thomas and Anne Jane Jones of Nanybyr, Ystumtuen. He was a Policeman in Cardiff prior to the war, and enlisted into the Grenadier Guards. Lemuel was posted to France on 14 August 1914 with the 2nd Battalion, Grenadier Guards, which was attached to 4th (Guards) Brigade, 2nd Division. They moved to Belgium, where they fought at the Battle of Mons, and retreating southwards, fought at the Affair of Landrecies, the Rearguard Actions of Villers-Cotterets, and at the Battle of the Marne where the German offensive was stopped. The Germans retreated north, and the BEF met them, fighting at the Battle of the Aisne. The 2nd Division were then moved to Flanders, where they fought at the First Battle of Ypres, when the German sweep through Flanders was stopped. Lemuel was killed in action at Ypres on 10 November 1914.  His body was not recovered from the battlefield and his name is commemorated on the Ypres (Menin Gate) Memorial, Belgium. (The Menin Gate Memorial is incorrectly inscribed as T.S. Jones). 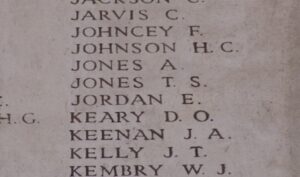 Richard Clement Richards, Private, 93541, Royal Welsh Fusiliers. Richard was born in 1892, the son of Richard and Elizabeth Richards, of Cwmrheidol. He was called to the colours in February 1918, but appealed on the grounds that he was a lead miner and had worked throughout the war at Fort Mine, Ystumtuen. In April he was informed his appeal was refused and Richard was posted to France, where he joined the 13th Battalion, Royal Welsh Fusiliers. The battalion was on the Somme, attached to 113 Brigade, 38th (Welsh) Division. On 21 August 1918 the 38th Division launched an attack across the River Ancre, and within days had captured the heights of Thiepval Ridge and Pozières Ridge. The Division then drove eastwards, towards Longueval, and after capturing Delville Wood, moved towards Morval. Richard was killed in action on 1 September 1918, during the assault on Morval village. He is buried in Morval British Cemetery, France. The cemetery is almost purely Welsh, apart from the grave of one German. 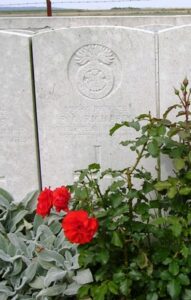 Heber Thomas, Second Lieutenant, The Buffs (East Kent Regiment). Heber was born at Ystumtuen on 20 May 1891, the son of Reverend David Thomas, and of Jane Thomas (nee Davies). By 1901 the family were residing at Brynffynon, Dolgellau. Heber was educated at Ruthin Grammar School before gaining a position as a Clerk with the National and Provincial Bank prior to the war, and enlisted into the 2/5th Battalion, East Kent Regiment on 8 May 1916. In May 1917 Heber was commissioned, and posted to the 7th Battalion, East Kent Regiment, which was attached to 55 Brigade, 18th (Eastern) Division. The division was at Arras, and moved to Ypres in July, taking part in the Battle of Pilckem, where they helped capture Westhoek. Heber was killed later into the Third Battle of Ypres, whilst fighting near Poelcapelle on 12 October 1917. He was 26 years old, and is commemorated on the Tyne Cot Memorial, Belgium. Heber is not commemorated at Ystumtuen. 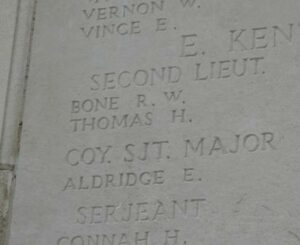 Josiah Williams, Private, 15132, Royal Welsh Fusiliers.  Josiah was the son of John and Mary Jane Williams of Lluest Park, Ystumtuen. He enlisted at Wrexham into the 10th Battalion, Royal Welsh Fusiliers, which had formed there on 16 September 1914, becoming attached to 76 Brigade, 25th Division. On 27 September 1915 Josiah landed at Boulogne with the battalion, who subsequently transferred with 76 Brigade to the 3rd Division, and over the coming weeks participated in heavy fighting. The Brigade joined the Division at Bellewaarde, where it had been for several months. On 2 March 1916 the Division attacked the German positions at The Bluff, and over the day suffered heavy casualties. The following morning, the Germans bombarded the captured positions, and the 10th RWF suffered terribly. Josiah was killed in action here, on 3 March 1916. He was 22 years old, and is commemorated on the Ypres (Menin Gate) Memorial, Belgium. 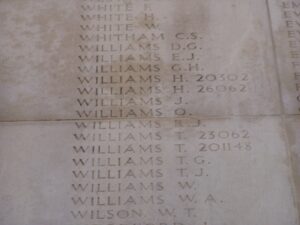