Ystrad Aeron is a small village west of Felinfach on the A482 between Lampeter and Aberaeron, situated at the junction of the B4342 road to Llanarth and the A482. Situated within St Michaels Church, at Ystrad Aeron are a fine collection of seven marble memorials, in honoured memory to members of the Vaughan Family, who gave fine military service to their country. There is also a separate memorial for Robert Owen, who fell during World War Two. 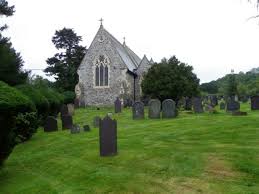 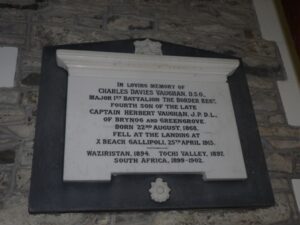 Charles Davies Vaughan, DSO, Major, Border Regiment. Charles was born on 22 August 1868, the son of Captain Herbert Vaughan, and of Julia Vaughan, of Brynog, Felinfach. Charles had served in the South African War of 1899-1901, and had been awarded the Distinguished Service Order for his gallantry there. At the outbreak of the Great War, he was in Burma with the 1st Battalion, Border Regiment. He had married Dorothy Jean Ashby at Maymyo Burma on 14 August 1914, and she returned to her home at Crabtree Cottage, Wanborough, Guildford, Surrey, whilst Charles returned with his battalion to England, landing at Avonmouth on 10 January 1915. The battalion then joined 87 Brigade, 29th Division, and on 17 March 1915 sailed from Avonmouth for arrived Alexandria. From here the Division moved to Mudros, and landed at Gallipoli on 25 April 1915. Charles was killed whilst leading his Battalion ashore at X Beach, Cape Helles on 25 April 1915. He was 47 years old, and is buried at Pink Farm Cemetery, Helles, Gallipoli. He is also commemorated on a memorial at St. Michael’s Church, Ystrad. His brother, Philip was killed later in the war.

SACRED TO THE MEMORY OF EDWARD VAUGHAN OF GREENGROVE ESQRE; WHO DIED JULY 2ND. 1796; ALSO ANNE HIS BELOVED WIFE / WHO DIED JULY 1ST 1797; ALSO JOHN VAUGHAN LLOYD OF BRYNOG ESQRE; SON OF THE ABOVE WHO DIED JANUARY 18TH. 1845 AGED 81 YEARS; ALSO JANE HIS BELOVED WIFE WHO DIED NOVEMBER 15TH. 1849 AGED 84 YEARS; ALSO MARGARETTA JUSTINA ELEANORA; YOUNGEST DAUGHTER OF THE ABOVE NAMED JOHN AND JANE VAUGHAN LLOYD; WHO DIED MAY 27TH. 1827 AGED 15 YEARS; ALSO EDWARD VAUGHAN, THE ELDEST SON OF THE ABOVE JOHN AND JANE VAUGHAN LLOYD, LT. COL. COMMANDING HIS MAJESTY’S 98TH. FOOT WHO DIED AT CAPE TOWN ON THE 20TH. JULY 1833; WHERE A MONUMENT HAS BEEN ERECTED TO HIS MEMORY BY HIS BROTHER OFFICERS AND SOLDIERS OF THE REGT. AGED 42 YEARS. 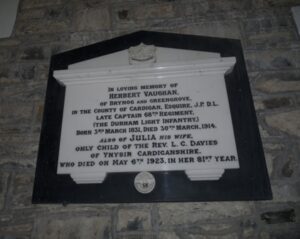 IN LOVING MEMORY OF HERBERT VAUGHAN, OF BRYNOG AND GREENSGROVE, IN THE COUNTY OF CARDIGAN, ESQUIRE, J.P., D.L. LATE CAPTAIN 68TH REGIMENT, (THE DURHAM LIGHT INFANTRY) BORN 3RD MARCH 1831, DIED 30TH MARCH 1914. ALSO OF JULIA, HIS WIFE, ONLY CHILD OF THE REV. L. C. DAVIES OF YNYSIR, GLAMORGANSHIRE. WHO DIED ON MAY 6TH 1923, IN HER 81ST YEAR. 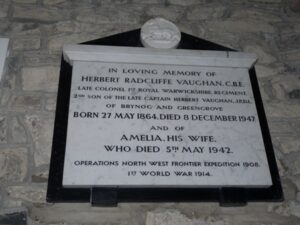 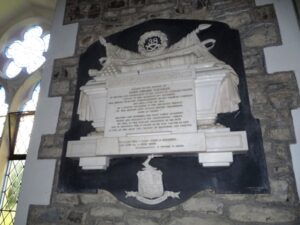 SACRED TO THE MEMORY OF JOHN CROSBY VAUGHAN OF BRYNOG AND GREENGROVE IN THE COUNTY OF CARDIGAN ESQUIRE CAPTAIN IN HER MAJESTY’S 38TH REGIMENT WHO SERVED FROM THE COMMENCEMENT OF THE CRIMEAN CAMPAIGN AND DIED JUNE 16TH 1855 OF A WOUND RECIEVED IN THE ADVANCED TRENCH OF THE BRITISH LEFT ATTACK BEFORE SEBASTAPOL AGED 25 YEARS. BELOVED AND HONOURED FOR MANY NOBLE QUALITIES BRAVE AND ZEALOUS IN HIS PROFESSIONAL CAREER HE FELL IN THE GALLANT DISCHARGE OF HIS DUTY AND IS MOURNED FOR IN DEATH AS HE WAS VALUED IN LIFE AS ONE OF THE BEST AND TRUEST OF BROTHERS AND FRIENDS.

Captain John Crosby Vaughan, killed in action on the 16th June 1855 The 38th Regiment of Foot (1st Staffordshire) In early 1854 the 38th Regiment was short of its official strength, so was authorised to recruit an additional 200 men and was made ready for deployment as part of the Eastern Expedition. Colonel Sir John Campbell was appointed Brigadier, Lieutenant-Colonel J.J. Louth Commander of the Regiment with Brevet Lieutenant-Colonel Sparks his second-in-command, the Regiment consisted of HQ, grenadier, Light and numbers 1 to 6 companies, with them would travel 23 women, 12 horses and 3 civilian servants. On the 24th of April the first five companies of the 38th embarked on the steamer Melbourne without ceremony, followed by the remaining three soon after on the steamer Megara, all companies landed at Gallipoli during May. At Gallipoli the 38th were inspected by the French Commander-in-Chief Marshal de St. Arnaud, and had the pleasure of forming a Guard of Honour for the Turkish War Minister. On the 22nd June the Regiment moved to Varna and at Scutari were issued with the new deadly accurate Minie rifle, finally on the 14th September they were sent to the Crimea, twenty eight miles from Sevastopol, the capture of which was the main allied war aim. Due to bad weather the disembarkation from the ships was not completed until the 16th and the troops had to suffer the terrible weather conditions being drenched in the rain without shelter, food or drinking water. Inkerman With the siege of Sevastopol underway, a number of the 38th were to take part in the Battle of Inkerman. On the 5th of November under foggy conditions the Russians launched a surprise attack on the British entrenchments. After fierce fighting the British made a series of counter-attacks and as the fog lifted more regiments entered the fray, superior fire-power inflicted severe casualties on the Russians, and after the French attacked their flank the Russians were forced to withdraw. Although not all members of the 38th were involved, the Regiment was awarded the Battle Honour ‘Inkerman’. Sevastopol The siege of Sevastopol continued with the troops suffering in the harsh winter conditions, on the 21st of December the Russians made another sortie attacking a detachment of the 50th (West Kent) Regiment. Two companies of the 38th were sent to reinforce, them launching a charge at the enemy forces driving them back and inflicting considerable losses on them, four soldiers of the 38th were killed during the engagement. Awards and Casualties The men of the 38th Regiment received the Crimea Medal with many being entitled to three clasps ‘Alma’, ‘Inkerman’ and Sebastopol. However approximately 40 were present at Balaklava, so entitling those to this clasp also. Some fifteen Distinguished Conduct Medals were awarded to other ranks, while a number of officers received French and Turkish awards. A total of three officers and forty three other ranks were killed in action and two hundred and seventeen wounded, another two officers and four hundred men died for various reasons during the campaign while a further twenty three officers and two hundred and sixty men were invalided home, nine men were captured by the enemy and eight were convicted of desertion. The Regiment left Balaklava for England on the 26th June 1856 on HMS Caser with a total strength of eight hundred and fifty, less than half its original strength. 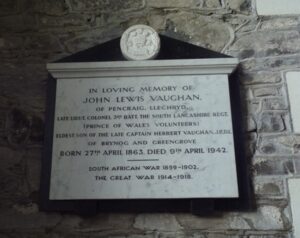 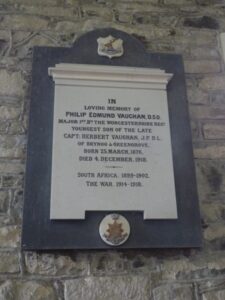 Philip Edmund Vaughan, DSO, Major, Worcestershire Regiment. Philip was the son of Captain Herbert Vaughan, and of Julia Vaughan, of Brynog, Felinfach. He married Marjorie Bennett in 1910, of Benhill Wood End, Sutton, Surrey. He was commissioned into the Worcestershire Regiment in 1894, and had served with them during the Boer War. At the outbreak of the Great War, Philip moved to France with the 2nd Battalion, Worcestershire Regiment, and fought during the retreat from Mons to the Marne with the 2nd Division. Philip fought with the Division during the First Battle of Ypres that year, and in 1915 fought at Neuve-Chapelle and Loos. By the time of the Battle of the Some in 1916, Philip was in command of the 8th Battalion, Green Howards (Yorkshire Regiment). The battalion was attached to 69 Brigade, 23rd Division. They saw their first major action at the Battle of Albert, where they captured Contalmaison. Philip was awarded the Distinguished Service Order for his bravery and leadership at Contalmaison in July 1916. The Division fought throughout the Somme offensive, and in May 1917 took part in the Battle of Messines. The Division then fought at the Third Battle of Ypres, before being sent overseas, to Italy. On 16 November 1917 concentration had been completed between Mantua and Marcaria. On 4 December the Division took over a section of front line on the Montello, relieving the 70th Italian Division, and then fought at the Battle of Asiago and the Battle of Vittorio Veneto. Philip survived the war, but had been invalided hom in the last few months of the war. He died at Endsleigh Place Hospital, London on 5 December 1918, aged 40, and was brought home to be buried in the family vault at Llanfihangel Ystrad (St. Michael) Churchyard. 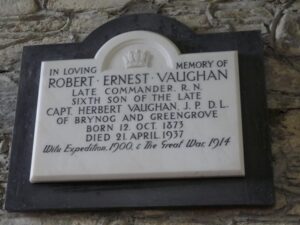 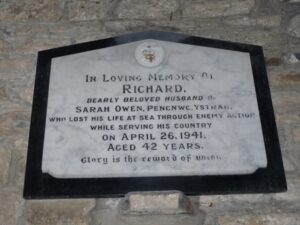 IN LOVING MEMORY OF RICHARD, DEARLY BELOVED HUSBAND OF SARAH OWEN, PENCNWC, YSTRAD, WHO LOST HIS LIFE AT SEA THROUGH ENEMY ACTION WHILE SERVING HIS COUNTRY ON APRIL 26, 1941 AGED 42 YEARS. GLORY IS THE REWARD OF VALOUR.

Richard Thomas Owen, Fourth Engineer Officer, Merchant Navy. Richard was the son of Griffith and Martha Owen, of Cribyn, and the husband of Sarah Owen, of Felinfach. He served with the Merchant Navy aboard the SS Henri Mory, a Swansea registered steamer, along with his close friend Daniel Davies, also of Cribyn. On 26 April 1941, Henri Mory was torpedoed and sunk by the German submarine U-110 in the Atlantic. Richard was 41 years old when he died that day, and he is commemorated on the Tower Hill Memorial, London.