The Parish of Trefeurig is situated around four miles north-east of Aberystwyth. The area was originally part of the parish of Llanbadarn, but in 1894 the Parish of Trefeurig was established. Within twenty years, at the outbreak of the Great War in August 1914, the Parish was to see many of its sons embark for war, some of whom never return. Just 21 years later the Parish suffered the loss of more of its sons as a result of the Second World War. All of these men, those who served and those who fell, are commemorated on the Parish War Memorials, located within Trefeurig School, which has sadly closed. The memorials have since been relocated into a new position in the local park. Many thanks to Carolyn Griffiths for the update and the photo. 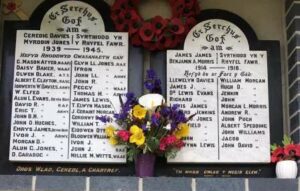 James James, Lance Corporal, 22127, Welsh Regiment. James was born in 1893, the son of Thomas and Sarah James of Llanbadarn. He enlisted at Tonypandy into the 15th Battalion, Welsh Regiment, which was known as the Carmarthen Pals battalion, attached to 114 Brigade, 38th (Welsh) Division. On 2 December 1915 the battalion moved to France, and the entire Division moved to the Fleurbaix sector, where it was initiated into trench warfare. During June 1916 the Division marched south to the Somme, and on 7 July 1916 attacked Mametz Wood. The initial attack failed, and it was three days later, on 10 July, that a fresh attack was mounted. James was killed in Mametz Wood on 11 July 1916. He was 23 years old, and is commemorated on the Thiepval Memorial, France. There is also a memorial to James at Capel Bethel, Cwmerfyn. 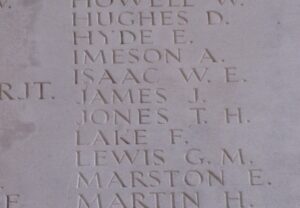 Dewi Mason, Private, 23354, Royal Welsh Fusiliers. Dewi was born in Trefeurig in 1892, the son of David and Margaret J. Mason. By 1901 the family had moved to 34, Florist Street, Oxford Street, Liverpool. Dewi enlisted in Liverpool into the 16th Battalion, Royal Welsh Fusiliers, which was attached to 113 Brigade, 38th (Welsh) Division. On 2 December 1915 the battalion moved to France, and the entire Division moved to the Fleurbaix sector, where it was initiated into trench warfare. During June 1916 the Division marched south to the Somme, and on 7 July 1916 attacked Mametz Wood. The initial attack failed, and it was three days later, on 10 July, that a fresh attack was mounted. After two days of heavy hand to hand fighting within the wood, the Germans withdrew. Dewi was killed in action in the wood on 11 July 1916, aged 25. He has no known grave and is commemorated on the Thiepval Memorial, France. He does not appear to be commemorated locally. 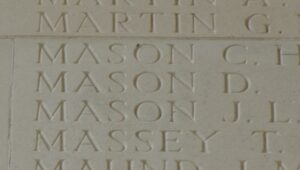 Benjamin Arthur Morris, Private, 57051, Welsh Regiment. Benjamin was the son of Lewis and Mary Morris, of Trefeurig, Bow Street, Cardiganshire, and the husband of Margaret J. Morris, of Fair View, Salisbury Road, Maesteg. He enlisted at Bridgend into the Glamorgan Yeomanry, and was posted to France, probably late in 1916, joining the 14th Battalion, Welsh Regiment, which was attached to 114 Brigade, 38th (Welsh) Division. The division had moved to Ypres after its exertions at Mametz Wood, to rebuild in the quieter sector along the Boesinghe Canal. It was from here, on 31 July 1917 that the division made its famous assault which captured the Pilckem Ridge, and after seeing further action at Langemarck moved to the Fleurbaix sector to rebuild again. In April 1918 the division was moved to the Somme to counter the German offensive there, and spent several months in the line north of Albert, prior to launching its famous attack across the River Ancre on 21 August 1918. The division then began its drive across the old Somme battlefields, and by the end of August had reached Morval, a strongly defended village. Benjamin was killed during the attack on the village on 1 September 1918. He was 28 years old, and is buried in Morval British Cemetery, France. 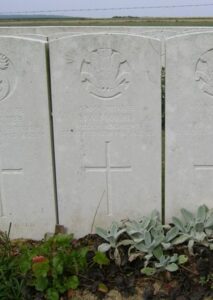 Ceredig Davies, Rifleman, 6850238, King’s Royal Rifle Corps. Ceredig was the son of Llewellyn and Bronwen Davies, of Cwmsymlog, Penrhyncoch. He served with the 12th (2nd Bn. The Queen’s Westminsters) Battalion, King’s Royal Rifle Corps. The battalion had fought in North Africa, as part of the 8th Armoured Brigade, returning to Britain in December 1943 after the surrender of the Afrika Corps. It took part in the Normandy landings in June 1944, and in the subsequent break-out from the Normandy beaches, and the drive through France into Belgium and Holland. Ceredig was killed just after the end of Operation Market Garden, on 9 October 1944. He was 29 years old, and is buried at Jonkerbos War Cemetery, Netherlands. 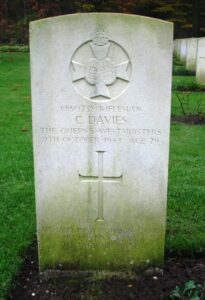 Myrddin Jones, Sergeant, 1602070, Royal Air Force Volunteer Reserve. Myrddin was the son of John and Mary Jones, of Salem, Bow Street. He served as an Air Gunner with 619 Squadron, Royal Air Force, which was a heavy bomber squadron, based in Lincolnshire, equipped with the Avro Lancaster. At about 17.20 on 20 October 1943 Myrddin took off from RAF Woodhall Spa aboard Lancaster III, Serial EE114, under the command of Pilot Officer Christopher Firth, which was the first large scale bombing raid of the war, with some 385 Lancaster’s despatched to bomb Leipzig. Myrddin’s Lancaster was among 16 lost on the raid, crashing vertically into the ground near Langwedel, killing all seven men aboard. Myrddin was just 21 years old when he was killed during the crash. He was initially buried alongside his fellow crewmen in Langwedel, but after the war their graves were relocated into Hanover War Cemetery, Germany. 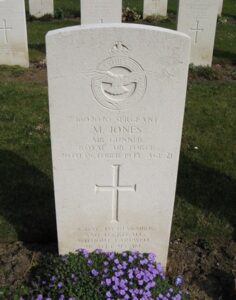