Talgarreg is a small village, situated on the crossroads of the B4338, and the B4459, about six miles southwest of New Quay. The men of the village who fell during the Great War are commemorated on two separate War Memorials, which were originally located at Pisgah and at Bwlchyfadfa Chapels. These memorials have since been relocated to Talgarreg Memorial Hall. David Davies, David Beynon Davies, Evan Lloyd Williams, Tom Davies and Thomas George Turke are named on the War Memorial inside Pisgah Chapel, and Daniel Jones, David Jacob Lewis, Stanley Hancock, John Owen Thomas and Walter Davies are named on the War Memorial inside Bwlchyfadfa Chapel. All of these men are commemorated below. 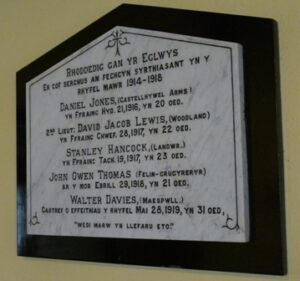 Walter Davies, Private, 10578, South Wales Borderers. Walter was born in Llwyncelyn in 1888, the son of Evan and Eliza Davies. By the outbreak of war, Eliza had died, and the family had moved to Maespwll, Talgarreg. Walter was an army reservist, who had been called up at the outbreak of war and sent to France in October 1914 with the 1st Battalion, South Wales Borderers. He was wounded and taken Prisoner by the Germans near Zonnebeke in November 1914, and remained in captivity until his release in January 1919, returning home to Talgarreg. Walter’s health had suffered during his captivity, and he died on 28 May 1919, aged 31. He was buried at Llwyncelyn, but is not commemorated by the CWGC.

Stanley Hancock, Private, 90589, Machine Gun Corps. Stanley was born in Taunton in 1896, the son of Harriet Hancock. He resided in Glandwr, Talgarreg prior to the Great War, where he worked as a farm labourer. He enlisted at Brecon into the South Wales Borderers, but later transferred into the 197th Company, Machine Gun Corps, who were attached to the 58th (2/1st London) Division. The Division moved to France during January 1917 and followed the German withdrawal to the Hindenburg Line in March 1917. They fought at Bullecourt during May 1917 before moving north to take part in the Battle of Third Ypres. Stanley was killed in action during the Second Battle of Passchendaele on 9 November 1917, aged 23. He is buried at Coxyde Military Cemetery, Belgium. 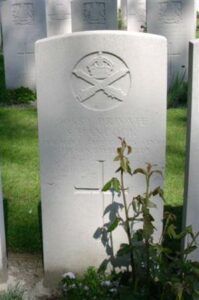 Daniel Jones, Private, 39517, South Wales Borderers. Daniel was the son of John and Hannah Jones, of Castle Howell Arms, Llandyssul. He enlisted at Newport into the Monmouth Regiment, but later transferred into the 2nd Battalion, South Wales Borderers. At the outbreak of war the Battalion was on garrison duty in China. They fought an action here against German troops stationed on Tsingtao, before being rushed back to England, where they joined 87 Brigade, 29th Division. The Division moved to Gallipoli via Egypt, landing on 25 April 1915. They remained here until evacuation to Egypt on 11 January 1916, and then moved to the Western Front on 15 March. The Division took part in its first major action in France during the 1916 Somme Offensive, and fought at the Battles of Albert and Le Transloy, suffering heavy casualties. Daniel was killed in action at the Battle of Le Transloy, on 21 October 1916. He was just 20 years old, and as his grave could not be identified after the war, he is remembered on the Thiepval Memorial, France. 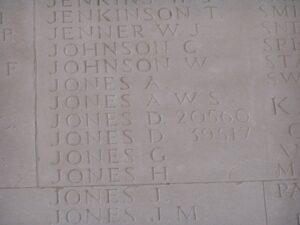 David Jacob Lewis, Second Lieutenant, Royal Fusiliers. David was the son of David and Anne Lewis, of Bronheulog, Llandyssul. He enlisted into the 2nd Battalion, Royal Fusiliers, which were attached to 86 Brigade, 29th Division. The Division moved to Gallipoli via Egypt, landing on 25 April 1915. They remained here until evacuation to Egypt on 11 January 1916 and then moved to the Western Front on 15 March. The Division took part in its first major action in France during the 1916 Somme Offensive, and fought at the Battles of Albert and Le Transloy, suffering heavy casualties. David was killed in action on the Ancre during the winter of 1916/17, on 28 February 1917, aged only 22. His body was lost on the battlefield, and so he is remembered on the Thiepval Memorial, France. 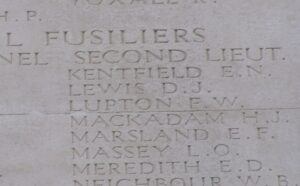 Johnnie Owen Thomas, Carpenter, Mercantile Marine. Johnnie was born in 1898, and resided at Tregeri Mill. He served with the Mercantile Marine aboard the SS Australier, a London registered steamship. On 29 April 1918, Australier was torpedoed and sunk by the German submarine six miles off Dungeness, with the loss of five lives. Johnnie was 20 years old when he died that day, and is commemorated on the Tower Hill Memorial, London. 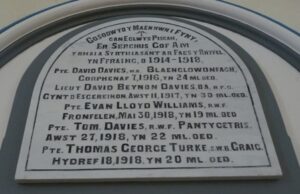 David Davies, Private, 38384, Welsh Regiment. David was the son of James and Anne Davies, of Gernos Farm, Maesllyn. During 1915 the family moved to Blaenglowan Fach, Talgarreg. David enlisted at Carmarthen into the Welsh Regiment, and landed in France on 16 December 1915, being posted to the 9th Battalion, Welsh Regiment, which was attached to 58 Brigade, 19th (Western) Division. The division was still in the Loos sector, and moved to the Somme early in 1916, where it was tasked with being the reserve division for the assault on Ovillers-La Boiselle on 1 July 1916. The division famously captured La Boiselle, and after a brief rest took part in the attack on Contalmaison on 7 July 1916. David was among 35 men killed during the attack by the 9th Welsh that day. He was 24 years old, and is commemorated on the Thiepval Memorial, France. 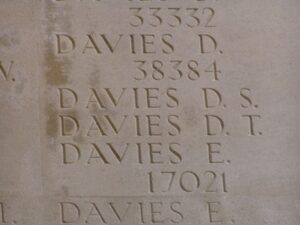 David Beynon Davies, B.A., Lieutenant, Royal Air Force. David was the son of John and Mary Davies, of Esgereinon, Cross Inn, Cardiganshire. He had studied for his BA after the death of his parents in 1898, and lived at 23, Church Road, Abertridwr prior to the war. David was commissioned into the Army, transferring from the General List to the Royal Flying Corps, and was posted to France with 52 Squadron, RFC. David was killed while flying his RE8, Serial A4695 in aerial combat over Spermalie on 11 August 1917, when he was shot down by Leutnant J. Buckler, of Jasta 17. He was 30 years old, and is buried at Ramscappelle Road Military Cemetery, Belgium. 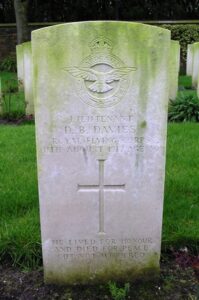 Tom Davies, Private, 203818, Royal Welsh Fusiliers. Tom was the son of Benjamin and Hannah Davies, of Pantycetris. He enlisted at Brecon in February 1917, and was posted to France on 3 August 1917, joining the 16th Battalion, Royal Welsh Fusiliers, which was attached to 113 Brigade, 38th (Welsh) Division. The division was moving to Armentieres, after having taken part in the Battle of Pilckem Ridge, and it remained there from September 1917 until March 1918 when the German Spring Offensive was launched. The British had been over-run on the Somme, and so in April the Division was moved South, taking up positions North of Albert, from where they weathered the storm of the coming months, until the war turned during the Battle of Amiens, on 8 August 1918. The Germans had now lost the upper hand, and the 38th Division made its famous crossing of the River Ancre from 21 August 1918, before driving the Germans back towards the Hindenburg Line. Tom was killed during the divisions attack on Delville Wood on 27 August 1918. He was 22 years old, and is buried at Longueval Road Cemetery, France. 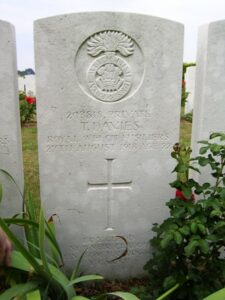 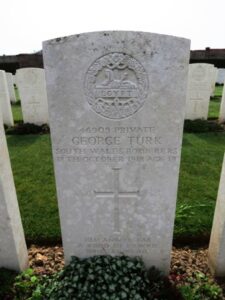 Evan Lloyd Williams, Private, 66192, Cheshire Regiment. Evan was the son of Thomas and Jane Williams, of Fronfelen, Talgarreg. He enlisted at Abertillery into the army, and was posted to France early in 1918, joining the 9th Battalion, Cheshire Regiment, which was attached to 56 Brigade, 19th (Western) Division. In 1918 they were caught up in the German Spring Offensive near St. Quentin, where they suffered terrible casualties, and fought at the Battle of Bapaume. They moved to Ypres, but were caught up in the German attack at Messines, and at Bailleul, and Kemmel. After suffering terribly again, they moved south to the quieter French sector to rebuild, but were caught up in the German offensive on the Aisne. Evan was killed during the Battle of the Aisne, on 8 June 1918. He was 19 years old, and is buried in Sézanne Communal Cemetery, France.

David James Thomas, Private, 29865, Royal Warwickshire Regiment. David was born at Talgarreg in 1897, the son of James and Martha Thomas. The family moved to Evelench, Tibberton, Droitwich, Worcs prior to the war and David enlisted at Worcester into the Worcestershire Regiment. David was posted to France at some time after 1916, and joined the 10th Battalion, Royal Warwickshire Regiment, which was attached to 57 Brigade, 19th (Western) Division. The division was one of the most renowned British units during the war, and had fought at Loos in 1915 and throughout the Somme offensive in 1916. During 1917 it took part in the Battle of Messines, and later in the year fought through the Third Battle of Ypres. By early 1918 the division was in positions near Bapaume, and was hit by the German offensive which was launched on 21 March 1918, and suffered heavy casualties during a brave rearguard action around Beugny. It was then moved back to positions near Messines to rebuild, but was hit by a fresh offensive by the Germans, called the Battle of the Lys. David was mortally wounded during heavy fighting near Messines, and died on 15 April 1918, aged 20. He is buried in Harlebeke New British Cemetery, Belgium. David does not appear to be commemorated anywhere locally. 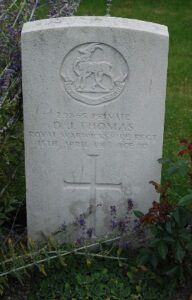